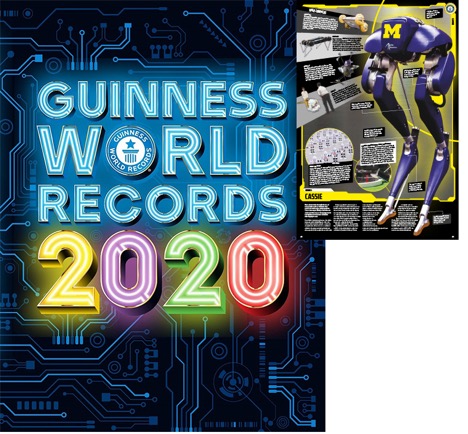 IMAGE:  Cassie is featured in the 2020 Guinness World Record book.

While most students at the University of Michigan were seeking a warm place to study during the polar vortex on January 30, 2019, Cassie Blue, the bipedal robot, decided to take a stroll – a long stroll.

She lasted 1 hour and 2 minutes out in bitter cold temperatures of -22C (-8F). And for her efforts, she earned entry into the 2020 Guinness Book of World Records for lowest temperature endured by a bipedal robot.

Running on lithium ion batteries, she had 60% of battery charge left after walking 90 minutes outdoors. This was only about a 25% reduction in battery power.

The battery held up better, it turns out, than her body – which cracked when Cassie fell over due to a loose wire.

“A wire came loose after the first ½ hr,” said Grizzle, “so we had to restart the clock. When the wire came loose, the entire power system shut down. She fell down on her face and her body armor shattered because we’re at -8F. Normally she would have just bounced. So we took her in and taped her back together. She looked like Frankenstein, but fortunately you can’t see that on camera.”

So why take the chance and send her out into such bitter cold?

“We wanted to do something that was uniquely suited for Michigan. So when the polar vortex came, Boom!” said Grizzle.

When you or I go out in -50 degree weather, the concern is that frostbite will set in pretty much immediately. Robots, of course, don’t have to worry about their tissue freezing. https://t.co/5gW63QLMZA

This world record, that happened on a chilly day in January of 2019, is just one more milestone in the life of Grizzle’s bipedal robots.