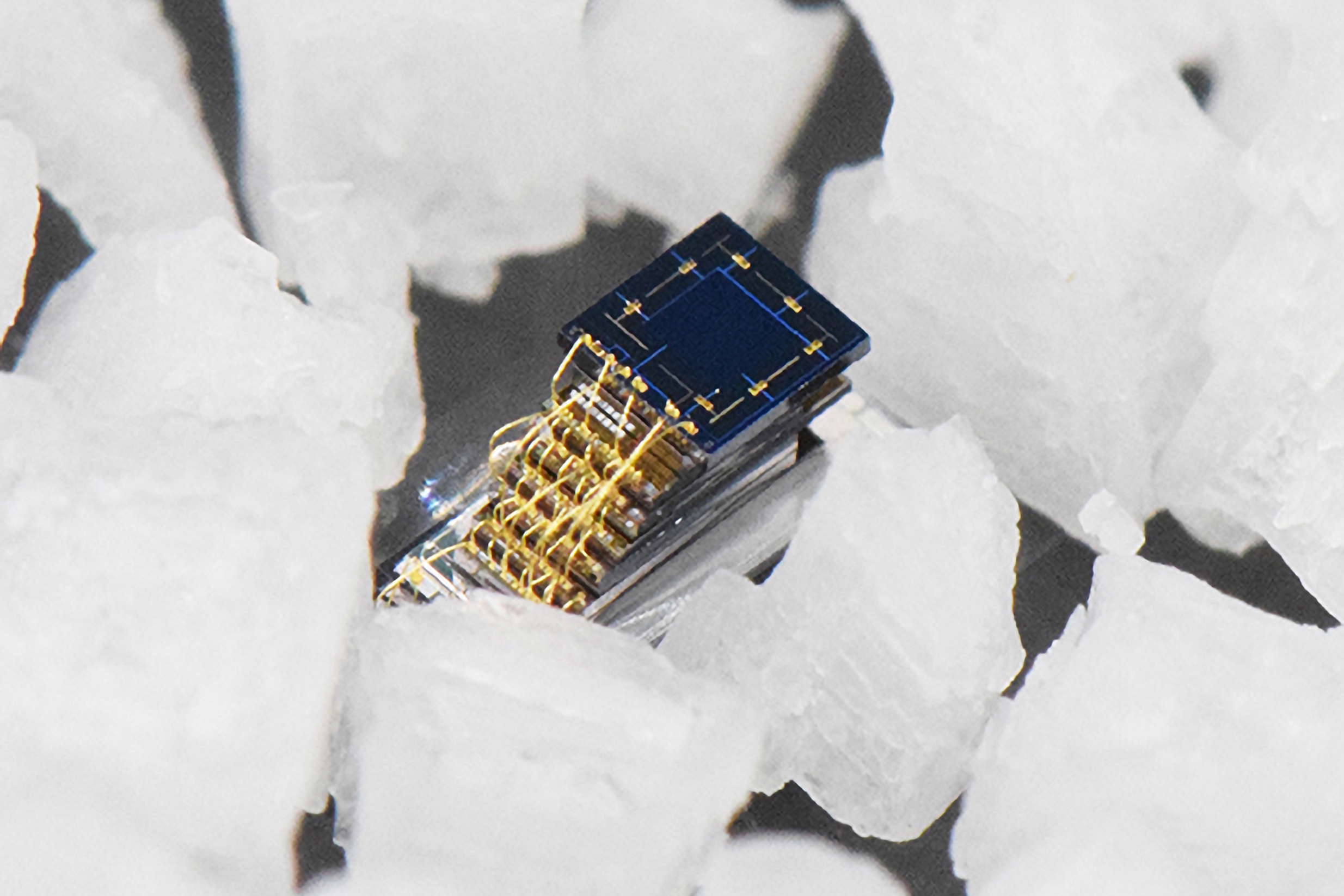 IMAGE:  The GaAs solar cell is pictured on top a Michigan Micro Mote, surrounded by grains of salt.

Researchers at the University of Michigan have designed a new, tiny solar cell that can perpetually power millimeter-scale computers at high efficiency even in low-light conditions. The 1.27mm2 photovoltaic module uses gallium arsenide (GaAs) instead of more conventional silicon to provide the high efficiency required for certain applications, including indoor monitoring and bio-implantable sensors.

“These PV modules are the life-blood of the M3 [Michigan Micro Mote] sensor systems and their efficiency directly impacts what operations we can sustain in low light conditions,” said David Blaauw, Kensall D. Wise Professor of Electrical Engineering and Computer Science, and one of the lead developers of the M3.

The team that developed the millimeter-scale computer known as the Michigan Micro Mote had been using traditional solar cells made of silicon – the kind that are placed on roofs or sit in solar fields for large-scale energy harvesting. They are inexpensive and easy to manufacture, but are not highly efficient. Looking for a more efficient solar cell in order to accommodate new applications, they approached colleague Prof. Jamie Phillips, who specializes in new optoelectronic materials and devices for photovoltaics, infrared detectors, and thin film electronics.

It just so happened that Phillips already had a photovoltaic cell made of gallium arsenide (GaAs) that he used as a baseline to test solar cells made of even more exotic materials. It would just need a bit of tweaking.

GaAs circuits and devices are far more expensive than silicon, and they require their own manufacturing process – so you won’t find them in typical consumer solar panels. But they are unbeatable for their efficiency, even at high temperatures and concentrated sunlight. They also operate well at the high frequencies needed for wireless applications, making them standard in the power amplifiers of most cell phones. 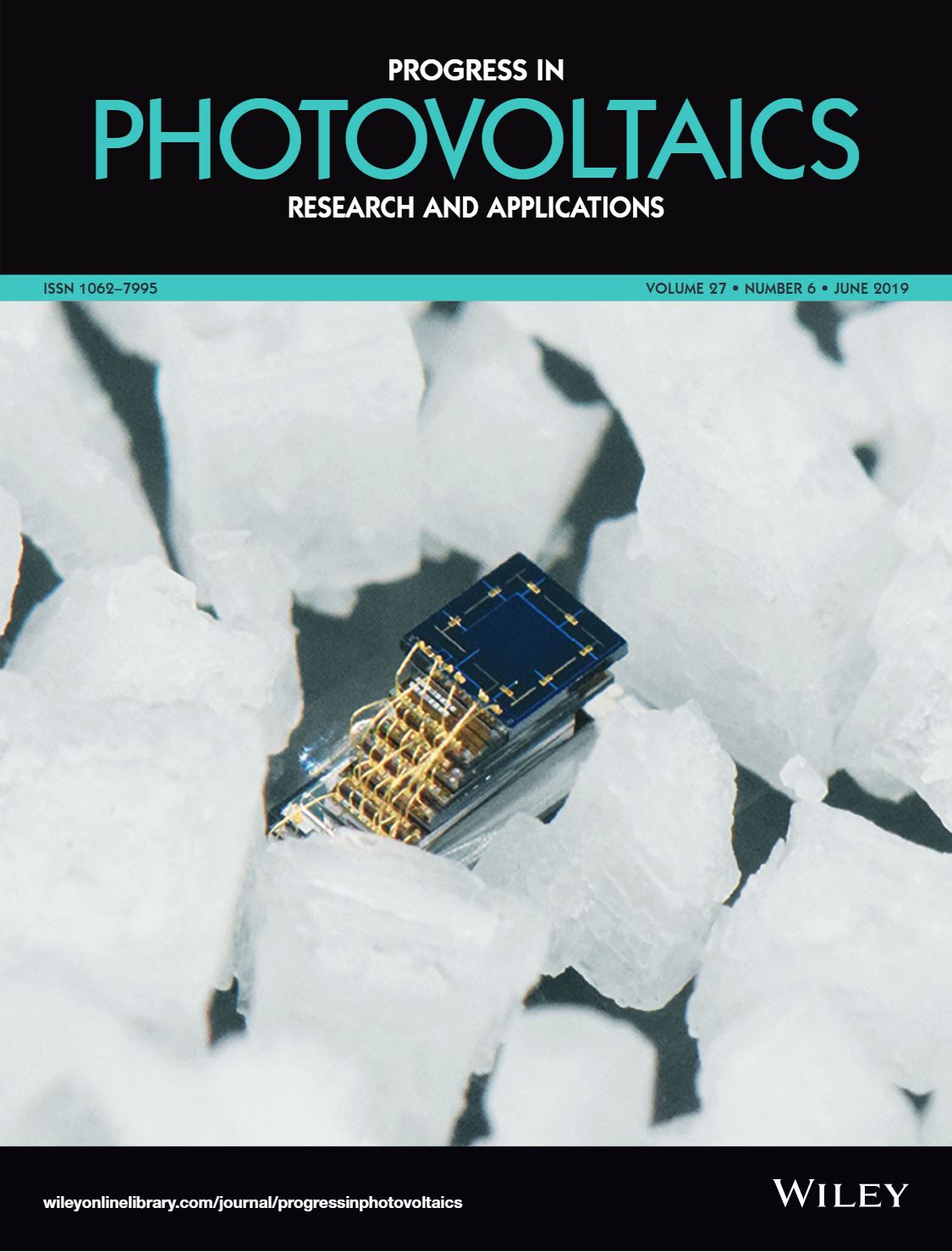 IMAGE:  The GaAs solar cell made the cover of "Progress in Photovoltaics."

And at this size, GaAs suddenly becomes cost effective.

These GaAs solar cells are equally well-suited for indoor use (sensing/surveillance), biomedical implants for tumor monitoring and other applications, and outdoor use.

“We are looking to efficiently power what is sometimes called the IOT squared (ie, the Internet of Tiny Things),” said Phillips. “For some of these applications, especially those operating in low light conditions, we need more power than a single PV cell can provide.”

That meant combining multiple PV cells in a way that reduced to a minimum any energy loss, which can’t be tolerated when powering such small devices.

To accomplish this, doctoral student Eunseong Moon took the lead on designing a photovoltaic module to prevent a shunt path of electrical current flow that dramatically reduces conversion efficiency for the series-connected photovoltaic cells.

The photovoltaic cell was built in the Lurie Nanofabrication Facility.

Details of the process are described in the paper, High‐efficiency photovoltaic modules on a chip for millimeter‐scale energy harvesting, by Eunseong Moon, Dr. Inhee Lee, Prof. David Blaauw, and Prof. Jamie Phillips.

Johanna Mathieu is one of four principal investigators on a project to improve home energy efficiency and to lower monthly utility bills.| Medium Read
Researchers