by Catharine June
EECS: Electrical and Computer Engineering
June 12, 2019
A new project funded by ARPA-E partners Achates Power and the University of Michigan in the development of a novel hybrid electric engine.| Medium Read
Enlarge 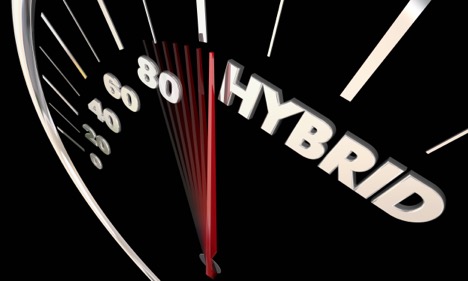 HEVs play an important role in minimizing energy consumption in the transportation sector, and projections suggest an increasing number of vehicles sold will be hybrid. Specifically, the Michigan team of Prof. Heath Hofmann, Dr. Jason Siegel (principal investigator), and Anna Stefanopoulou, the William Clay Ford Professor of Manufacturing and Director of the Energy Institute, will work to enhance the fuel-efficiency of the opposed-piston engine (OP Engine) developed by Achates Power.

Hofmann will develop control algorithms for a commercially available electric machine that will turn an OP Engine into a hybrid OP engine into a series-hybrid, or range-extender for electric vehicles. Siegel and Stefanopoulou will focus on the engine and its interaction with the motor generator.

Early versions of OP Engine, described in this video, have been around since 1882, and have been used in automobiles, ships, airplanes, and submarines, as well as tanks and trucks. Achates Power has been developing OP Engines that enable automakers to achieve high efficiencies across a wide range of operating conditions.

The plan is to reconfigure an Achates Power OP Engine by attaching two motor generators directly to the crankshafts of the engine, generating electricity directly from the rotational energy of the engine. The electric motor generator attached to the engine will feed the battery for the range extension, delivering consistent, efficient power to the driveline.

“Basically,” said Hofmann, “the electric machine we attach to the engine will create a generator system for a hybrid electric vehicle.”

There are many different ways to build a hybrid vehicle, and this project corresponds most closely to a series configuration, though with some novel aspects. The mechanical crank to crank connection, used to synchronize the intake and exhaust pistons of the OP Engine, will be eliminated and the electric motor generators will provide electrical piston synchronization. The electric motor generators will also be used to control the position of the piston in the engine, which makes it possible to control its thermodynamic cycle. These control opportunities are expected to improve the overall fuel efficiency of the engine.

Siegel will focus on the real time estimation of the piston motion which is critical for the efficiency as a tight synchronization is imperative; a few degrees error and the pistons will not make sufficient compression to facilitate combustion. Stefanopoulou will derive the piston trajectory that optimizes the thermodynamic cycle based on multi-objective criteria.

“The models are critical because we need to be able to predict exactly what the engine’s going to do and then try to compensate with the electric motor generator,” said Hofmann.

One of the tricky parts for Hofmann is to be able to control the instantaneous torque pulses of the pistons with the electric motor generators, which are far less powerful.

“It’s a challenging control problem,” said Hofmann, who has worked on pure electric vehicles in the past, and is advisor to the student-run Michigan Electric Racing team.

“I am excited to design and optimize the controls that will free this opposed-piston engine from the mechanical constraints of the crank and gear mechanism through the electric motors; it is like breaking the shackles and unleashing its true potential,” said Stefanopoulou to Achates Power. “Along with the freedom though comes the responsibility of highly precise control and coordination of the piston motions to maximize efficiency and ensure a smoother operation.”

Nissan Motor Company will lend their expertise and perspective as an auto maker of hybrid electric vehicles.