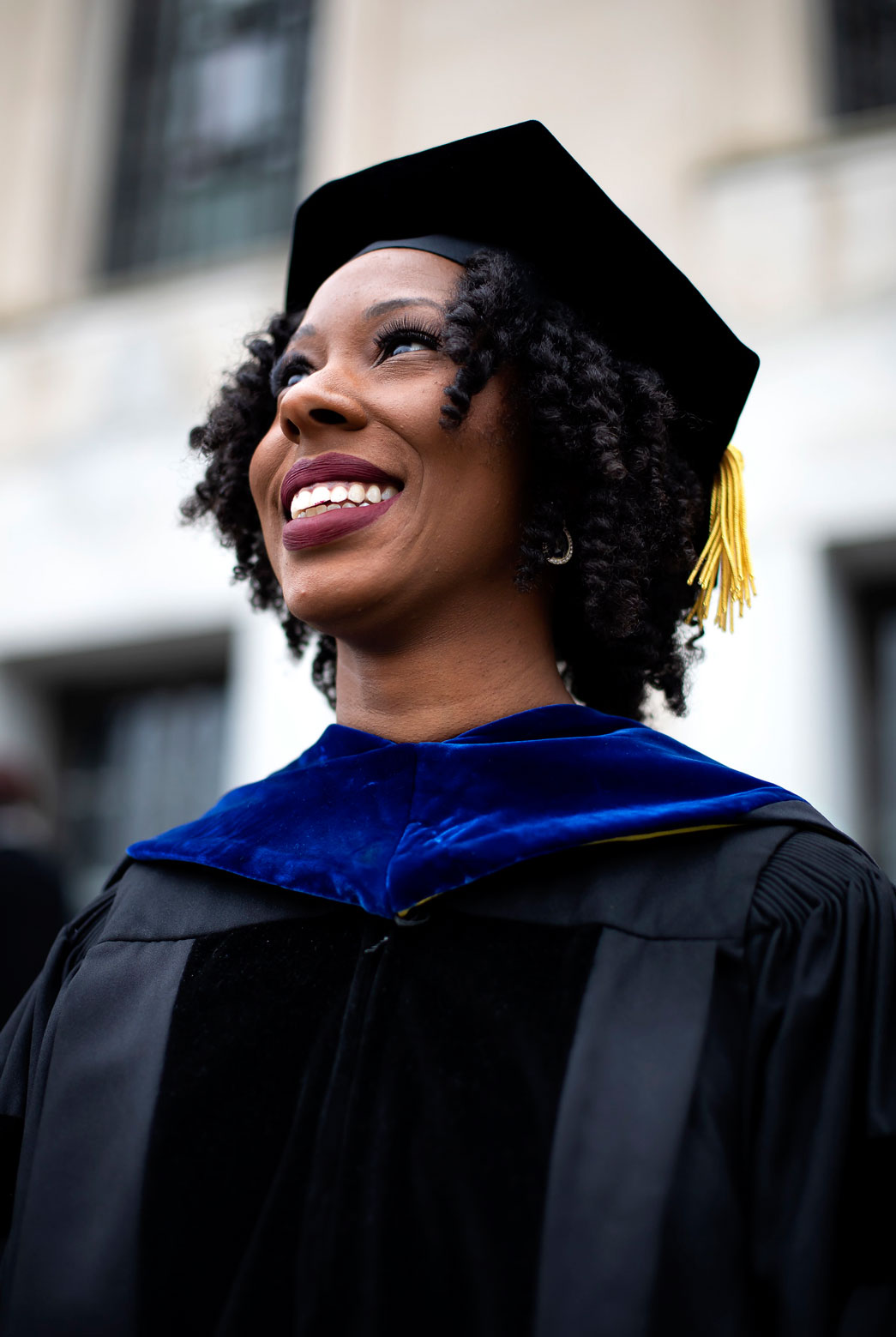 Ciara Sivels is the first African American woman to earn a PhD from the University of Michigan nuclear engineering and radiological sciences program, an accomplishment that drew attention from national media such as the Huffington Post and Blavity.

While she is proud to be a graduate of the nation’s top nuclear engineering program, and while the University of Michigan is proud to call her an alum, there is a shared uneasiness about the milestone itself. Did it really need to take until 2019? If we were as equal a community as we’d like to be, the answer would be no.

So here is Dr. Sivels on exposure, mentorship and grad school. (This Q&A has been edited for length, but the full version is available here.)

You talk about the importance of representation and exposure, and that you were heading toward culinary school even as of high school. What was pulling you in that direction?

A lot of people in my family cook. It was something that came natural to me, it was fun… And I was making good grades and stuff. I don’t know—I did lots of things in high school. I was in band, stepping, scholastic bowl team, praise dancing, super active in my church. Nothing really ever stood out.

So I was like, culinary is something I’m good at, and I really liked it, so I’ll do that. Without ever considering STEM (science, technology, engineering and medicine) [laughing].

How did you change direction?

I was in this regular chemistry class. I was the youngest student, but I did really well, and that was when my teacher said, “You should take the AP class.”

When I took the AP class, that’s when he was like, “You should really look into STEM.” And that was when I was like, “OK, maybe he has a point because…I like this.” Right? But I wasn’t exposed to it before and didn’t know it was a possibility.

When I took a physics class at a community college, that’s when I got into more nuclear physics type things. And then I was kind of like, OK, I can probably do this instead. But it wasn’t immediately like, “Yes, I want to do this.” It grew on me.

So you went from high school to MIT—what was that transition like?

To sum it up, it was the hardest thing I’ll probably ever do in life. Literally. I started at MIT in the summer under the program “Interphase” to help get me acclimated to the academics since I wasn’t what they consider “ready.”

If you know physics, you know vectors are everything, right? I didn’t know what a vector was when I got to MIT. I was in this summer class, and I always thought they were drawing these arrows.

I grew up in a rural town. Very country. And the school that I went to was predominantly white. So I kind of was used to that.

But for me, that transition wasn’t hard because… OK, so both of my parents went to HBCUs (historically black colleges and universities). And so, there’s a different mindset when you go to a university like that versus going somewhere like MIT, right? They teach you a lot about what it means to be black in the world.

My parents instilled in me: Alright, you’re in this school with all these white kids, but you’re not white. And you just need to know that going in. People may be your friends, or they may not, because of how you look.

Because I had that background, I already knew what the battle was. In high school, most of the time, I was the only black person in my classes.

When I came to MIT, it shifted a little bit because it’s a really small school, and most of the black people congregated in one dorm. So I had a really strong black community there, and I was super-active in NSBE (the National Society of Black Engineers).

Then, when I got to Michigan, it was similar, right? I got connected with SMES-G (Society of Minority Engineers & Scientists – Graduate Component) and I also had a lot of MIT alums here. I just fostered my community that way. And sure, I had other friends that weren’t minorities.

But I always was prepared for that. And it wasn’t like a negative. Not, “Oh, you can’t have any friends,” or anything like that. It was, “Just keep in mind—you’re smart, but if you don’t look like your peer who is just as smart, you may be treated differently, right? And so you just have to be aware of that.”

When you’re a kid, and they’re telling you these things, you’re like, “[sigh] You’re being dramatic. Times aren’t like that anymore.”

And then stuff would happen, and I’d be like, “Man…Yeah. It’s not different. [laughing] They’re right!”

So when people are like, “How do you feel about being the first black…”

This should have happened sooner.

With a lot of these engineering majors, it’s just unfortunate that women and minorities aren’t as prevalent. But hopefully this will change. I definitely think people are seeing why this is important, making strides to change things.

And luckily, in the nuclear department here, we had me, Crystal Green, and Valerie Nwadeyi. Crystal defended a few months ago, and Val is in her third year. So, there’ll be 3 of us. [laughing]

Were you planning on a PhD?

It was the same thing as culinary, right? Like, when I was doing culinary, STEM was never an option. Once I got into MIT, grad school wasn’t an option. Because I wanted to teach middle school. I wanted to target those populations because I feel like that’s where the gap is.

I spent my summers teaching. I literally was going for second-round interviews at Teach For America, and my faculty advisor, Professor (Richard) Lester, just really steered against that. He said, “No! You haven’t done any research. You don’t know what you like. There are so many things out there that you could pick!”

So, I got the GEM Master’s fellowship my senior year. I was still debating if I wanted to do a PhD. Now, I’ve done the PhD, but I’m still super passionate about teaching. So I’m trying to find ways to get back to that.

At Johns Hopkins, I just started working with this group—it’s called Math Mentors. We have mentees, and we teach them math. They’re elementary kids though, so it’s a little more challenging, but it’s fun.

What brought you to Michigan?

Michigan was the only place I applied for a PhD because they waived the application fee. I came to visit, and I really liked it. I met Professor (Sara) Pozzi, they said, “If you want to do detection work, this is the place to be. It’s the No. 1 school,” and all these things. I had really never heard about Michigan before because I was at MIT, right?

But the issue was my grades from MIT obviously weren’t as good as what they were looking for, so I came in conditional admittance.

I didn’t have any research experience, and that’s something I communicated when I came in for the interviews. Because every summer, I did teaching programs.

So with the GEM fellowship, I went to Pacific Northwest (National Laboratory) the summer before I came to Michigan. That gave me the first taste of research. And I liked it. And so after the first year, I went back to Pacific Northwest, and I came back and was like, “Oh, I want to do my PhD.”

In another interview, you said there were times you felt like leaving…

And there was other things too. Imposter syndrome is a real thing. And so for me, I was at the end of my Master’s, and I was nervous. Like, “Oh my god—if I stay for my PhD, I’m gonna have to take the quals. Am I gonna pass the quals? I don’t think I’m gonna pass the quals, so maybe I should just go somewhere else!”

But when Professor Pozzi got the CVT (Consortium for Verification Technology) [click], it was smooth sailing. That grant helped me because it really put a spotlight on research that Pacific Northwest and I were doing, replacing a plastic part of a radioxenon detector with a more sensitive stilbene crystal.

You’ve said that your parents influenced you on how to deal with setbacks and conflicts.

They raised me with this perspective: Like, it is what it is. Things are not gonna go your way. People are not going to see the world the way you see it. And you have two options. You can be upset about it and try to force it, or you can continue doing what you were supposed to be doing in the beginning! Like, before you cared about their opinions. Is their opinion gonna kill you or stop you? No, so…

OH. That’s an understatement. I used to call home crying. “Oh my god, this happened, or that happened.”

Like, “You knew what you were getting yourself into. You’re upset, but there’s nothing you can do, right? You have to keep going forward.” And that’s…what I needed.

When my equipment broke [sigh], it was like, I can be mad…forever…or I can figure out, OK, what am I gonna do now?

And certainly I was mad. [laughing] I was mad for a good amount of time. But I was also like, “OK, let me call these people. How fast can they get me another one?”

So, I can credit you with the first stilbene radioxenon detector?

Yeah. Yeah [laughing]. Well, I guess you could say the first operable. Because they made stilbene detectors in the past, but they just didn’t work. 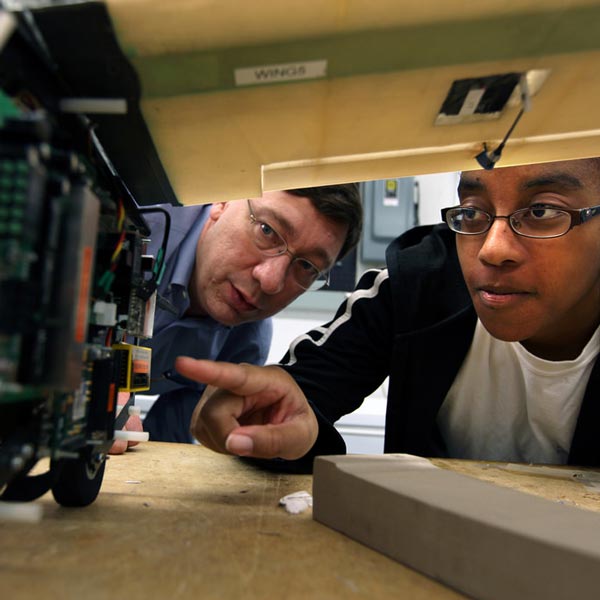 The NERS department's graduate students are an accomplished group, earning recognition from the College of Engineering, the University and professional societies for their research and leadership contributions. Congratulations to all!| Short Read