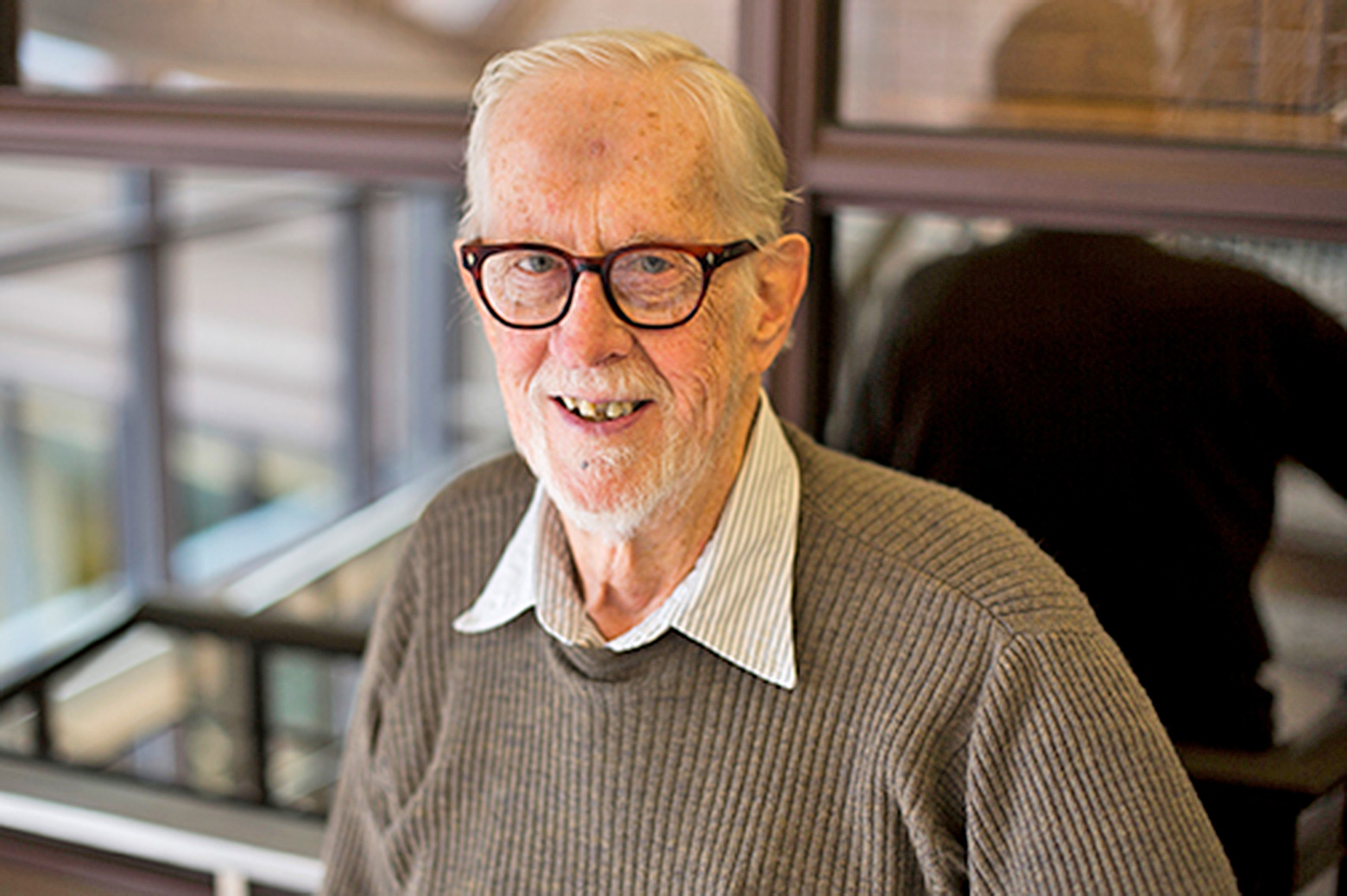 Professor Emeritus Rane Curl passed away on Sunday, May 12. His family hosted a celebration of his life on Sunday, July 7, at the Ann Arbor City Club.

Professor Curl received all his degrees in chemical engineering from MIT. He worked for Shell Development Company from 1955 to 1961 and taught at both the University College London and Technische Hogeschool Einhoven in the Netherlands before coming to the University of Michigan as an associate professor in 1964. He was hired by the Department of Chemical Engineering as an associate professor in 1964 and retired from teaching in 1997, following an exemplary and productive career.

James Wilkes, Rane Curl’s colleague for nearly 40 years, says, “His intellectual honesty was impressive—he would quickly serve me a wake-up call by pinpointing a weak spot in one of my expositions. He carried this trait into his classroom teaching, and his students admired him for that. In 1987, I succeeded him in developing our first undergraduate teaching lab, and had no hesitation in retaining his uncertainty analysis program that could give a good idea of what faith could (or could not) be placed in a computed result that depended on a number of measured experimental inputs.”

Wilkes says he also developed the famous ‘Curl Line’ that is still used for making objective evaluations of doctoral qualifying examination results in the department. “Rane had a wide variety of interests, including motorcycling (in his earlier years!), navigating the treacherous Crib Goch ridge in the mountains of North Wales, building his own harpsichord, and—of course—exploring caves. He was a good and stalwart friend.”

Another long-time colleague, Scott Fogler, says, “Rane changed the concept of our undergraduate student senior laboratory by running the course as a simulated industrial laboratory, Brown Industries, where the students function as professionals at the company. The students appreciated the experience they received in this setting.”

“The last few years I have had the opportunity to meet with Jim Wilkes, Pablo LaValle and Rane for our Friday lunches at Knights, where we always have great discussions.” adds Fogler. “We all enjoyed Rane’s stories and insights on current events during our time together.”As a faculty member, he particularly enjoyed developing aspects of the undergraduate laboratory courses, which are important transitions for the students from academic study to practical applications.” Many alumni will remember Professor Curl from the senior laboratory class, ChE 460.

As Scott Fogler mentioned, Curl introduced major changes to the senior laboratory course in the 1980s including “Brown Industries” named after the late George Granger Brown, with a new emphasis on simulating real problems in the experiments, in addition to making laboratory safety and environmental protection concerns more prominent in the course. Pablo LaValle, the department’s engineer, managed the upgrades and repairs, designed new equipment, and built it with the help of Don Trombley, the engineering lab technician.

LaValle (BSE ’82) never had a class with Professor Curl, although, as manager of the undergraduate labs, he participated in many classes taught by Curl. He says Curl demanded a good deal from the students because he wanted them to have an excellent grasp of chemical engineering processes before they entered their professions.

“His charge to the students at the beginning of the term was: ‘This is the process I need completed. Determine the most efficient conditions.’ Along the way, he asked many questions but did not provide answers to guide the students. He would tell them, ‘I am the plant manager and I’m paying you to solve my problem!’”

“When students gave oral presentations, he made sure that errors were pointed out quickly so the next team working on the project had a chance to make corrections during their follow-up work. He did commend teams who produced excellent reports and the students knew they had done a good job if he didn’t ask many questions during their presentations.”

Greg Keoleian (BSE ’80, MSE ’82, PhD ’87) agrees that Professor Curl set high standards for his students. “He was my instructor for several ChE courses and my doctoral research advisor. I remember getting 30 points out of 100 on a midterm exam but fortunately the mean was around 20 and Professor Curl graded on a curve in graduate courses! It was a difficult exam, however, Professor Curl’s one-page solution was very clear and simple. We learned a great deal from the class including how to attack challenging problems.”

In addition to studying the fundamentals of chemical engineering, Curl offered a special environmental seminar that Keoleian took. “This greatly impacted me and, along with undergraduate lab work with Professor Kadlec, led to my thirty-year career as a research scientist and professor at the University of Michigan’s School for Environment and Sustainability, he says. “I apply systems analysis and modeling approaches from my ChE days but now focus on analyzing and improving the sustainability of products and emerging technology. Although my exams have much higher means, I try to live up to the high standards he set back then!”

Several other students had similar experiences with Curl in their undergraduate classes.

Bruce Vaughen (BSE ’84) was a student in one of Curl’s 460 courses. He remembers his lab team proudly listed from their newly-acquired hand calculator’s display the calculations from their laboratory data in lengthy, hand-written columns as “13.123322, 14.849377, 15.239911, and so on, only to lose ten full points from their laboratory report. “Dr. Curl, with a bold, red, and underlined comment to us, wrote: ‘You do not have that much accuracy from your measurements!’ We learned our lesson quickly.”

Sue (Pierce) Green (BSE ’78) took an independent study course with Curl. “I was charged with determining an equation to relate refractive index to the density of various concentrations of zinc chloride solution at various temperatures,” she says. “When I became mired in the laboratory measurement data and couldn’t see the forest for the trees, Dr. Curl patiently described the bigger picture for me.” Ultimately, the method he shared with her would be used by field anthropologists to categorize seeds used as food.”

Jim Medalie (BSE ’81) took two courses taught by Curl. “None of us knew if we were going to make it! Boy, he was tough but he challenged us and taught us a lot.” He adds, “I’ll never forget his VW Beatle with Stroh’s cardboard six pack holders lining the ceiling of the car! He had two bumper stickers on it: ‘Bats need friends’ and ‘Think Mud.’ ”

Dan Sajkowski (BSE ’81, MSE ’82. PhD Stanford ’86) says, “I vividly recall the first exam, a mid-term, for ChE 230 in 1978. Almost the entire class flat out flunked it. Everyone was in shock at the next class. When someone asked Curl why the exam wasn’t graded on a curve like they were used to in other courses, his short and frank response made it clear that if you wanted to become a chemical engineer there where some things you absolutely needed to know. Grading on a curve was unsuitable. In that crystal-clear moment, I learned that there were standards in professions. And there were standards in life. And that we set standards for others to live up to. It was a terrific lesson.”

After Curl retired from teaching in 1997, he continued his long-time interest in speleology, the scientific study of caves and other karst features. He served on the boards of the nonprofit Michigan Natural Areas Council, the Karst Waters Institute, and the Michigan Karst Conservancy, of which he was founding president and for which he conducted field projects. He also continued a research program involving mathematical modeling of geomorphic processes in karst.

Some material for this article was taken from “A Century of Chemical Engineering at the University of Michigan,” compiled by James O Wilkes, 2002.