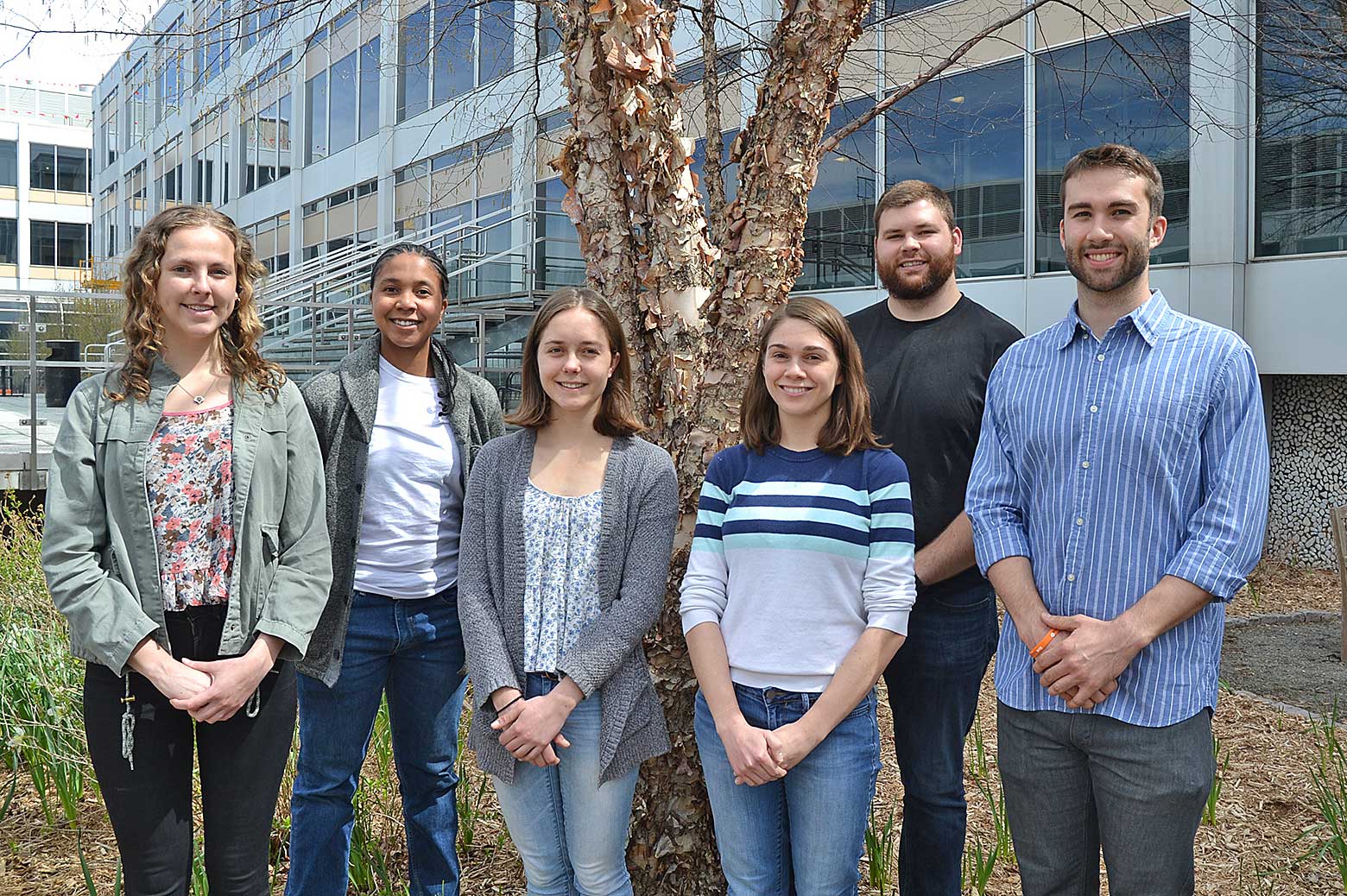 Zachary Berquist is a second-year PhD student in Andrej Lenert’s lab. He majored in chemical engineering at Penn State and spent a year in industry before starting graduate school. He is studying multicomponent aerogels as next-gen insulation materials for concentrated solar power. Specifically, he is coating a transparent and thermally insulating material—silica aerogels—with a second material to reduce thermal losses at high temperatures. He would like to join the faculty of a research university after he finishes his degree but is also considering working for a national lab or startup company.

Emma Brannon, a first-year PhD student in the Eniola lab, received her undergraduate degree in biochemical engineering from the University of Georgia in May 2018. Currently, she is working on a project to study neutrophil-particle interactions for the alleviation of sepsis, a serious life threatening medical condition. Sepsis is initially caused by the spread of a microbial infection that over stimulates the immune system, ultimately leading to paralysis of the immune system and disease progression. Thus, she plans to design polymeric microparticles that readily interact with immune cells (neutrophils), preventing immune system paralysis. After finishing her degree, she plans to pursue a career in academia, where she aspires to be a well-rounded professor, innovative researcher, and supportive mentor.

Margaret Braunreuther began working in Lola Eniola-Adefeso’s lab in January 2017, studying how physical properties of hydrogel vascular targeted carriers affect targeting efficacy and adhesion duration. She spent the summer in Ann Arbor in 2017 to continue with her research and take on more responsibility in the lab. During the summer of 2018, she was selected to participate in the National Cancer Institute Systems Biology and Physical Sciences in Cancer Summer Research Program. She worked with the physical sciences in the Oncology Center at the University of Minnesota with advisors Paolo Provenzano and Michael McAlpine, She worked there to develop a ‘bioink’ to support macrophages for 3D bioprinting. She will attend Stanford University, where she will pursue a PhD in chemical engineering.

Salwan Butrus is currently doing research in Joerg Lahann’s lab, where he developed structure-function relationships between the molecular properties of zwitterionic polymer brush surfaces and their bulk performance as stem cell microenvironments. He will start graduate school at University of California Berkeley Chemical Engineering, where he plans to work at the intersection of single-molecule biophysics and nanomaterial-polymer science to develop tools that probe and characterize complex biological systems.

Misché Hubbard, first-year in Nick Kotov’s and Scott VanEpps’ labs, did her undergraduate work at the University of New Mexico. There, she engineered mesoporous silica nanoparticles to deliver conventional small molecule antibiotics to pathogenic bacteria. Currently, she is synthesizing chiral nanoparticles for the purpose of bacterial biofilm dissemination and inhibition. She says she doesn’t plan too far ahead but she is an adventurous person who doesn’t like to be in a place too long. Her plan for an ideal life would be to tour and travel the world and become a freelance engineer.

Irina Kopyeva initially assisted with research in Joerg Lahann’s lab, where she worked on projects involved the creation and subsequent modification of the surface chemistry of substrates to better model the sugar-rich cellular glycocalyx. More recently, she is working in Ariella Shikanov’s lab in BME to develop three-dimensional culturing strategies for ovarian follicles in poly(ethylene) glycol to help provide reproductive options for females who have undergone chemotherapy. She will be attending the University of Washington to pursue her PhD in bioengineering next fall.

Matt Smith went to Michigan State University for his undergraduate studies, where he worked in Dr. Tim Whitehead’s lab doing protein engineering. After graduation, he worked for two years at Abimab doing therapeutic antibody discovery. Currently, he is a first-year graduate student in Peter Tessier’s lab researching antibody engineering. After graduation, he plans to explore opportunities in academia.

We would also like to congratulate four ChE alumni who received NSF Fellowships. They are all working on PhDs at other schools.