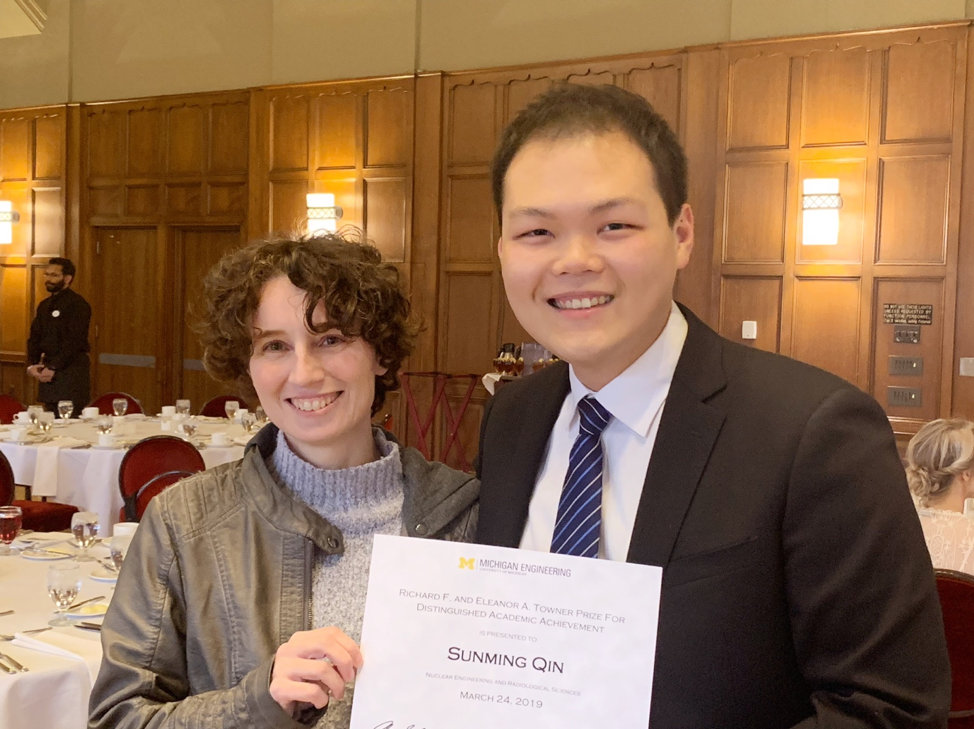 Congratulations to Ph.D. student Sunming Qin, recipient of the Rackham Predoctoral Fellowship 2019-2020 as well as the Richard F. and Eleanor A. Towner Prize for Distinguished Academic Achievement.

As a fourth year Ph.D. student in NERS department, Sunming is working in Professor Annalisa Manera’s group. His research focuses on high-resolution experiments and computations on mixing of turbulent buoyant jets in uniform and stratified environments

Turbulent buoyant jets have applications varying from nuclear reactor safety analysis to oceanography. To understand the underlying physics of such jets, non-intrusive optical methods of flow visualization, like particle image velocimetry (PIV) and laser-induced fluorescence (LIF), are applied to obtain highly-resolved velocity and concentration fields. However, high-resolution measurements of flows with density differences are challenging because changes in density correspond with changes in refractive index (RI), yielding blurred images. Refractive indices must match throughout mixing.

“This work initializes a novel, high-resolution databases for the mixing of turbulent buoyant jets in stratified environments to enhance the predictive capabilities of computational fluid dynamic models, which can be used to make nuclear power much safer and more efficient for our society.”

Besides these two honors, Sunming Qin’s work has earned two “Best Paper Awards” for the NURETH-2017 and ATH-2018 international meetings on thermohydraulics. Qin would like to express his sincere appreciations for the tremendous supports from his great advisors Professor Annalisa Manera as well as Dr. Victor Petrov. He also expresses special thanks to Prof. Igor Jovanovic, Prof. Xiaodong Sun, Prof. Eung Soon Kim (Seoul National University) and Garnette Roberts for their nominations and recommendations. He would like to thank all the colleagues in ECMF lab for supporting his project as well.