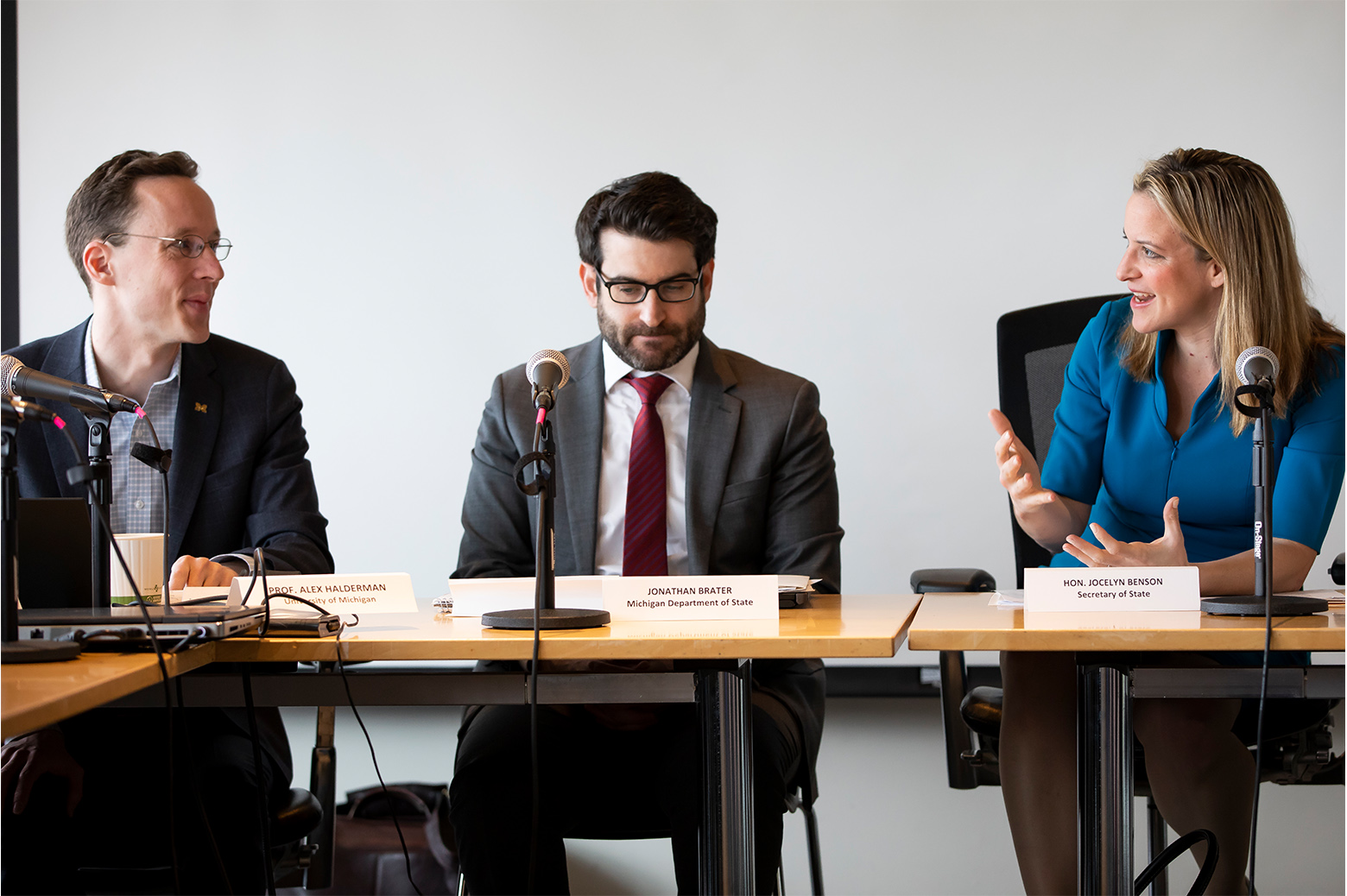 The newly-formed Michigan Election Security Commission, established by Secretary of State Jocelyn Benson on March 20, 2019, held its first meeting on Tuesday, April 16, on the University of Michigan North Campus.

Secretary Benson began the day by welcoming the 18 members of the commission and reviewing their charter. The commision then spent the day in work. The meeting took place in the Bob and Betty Beyster Building, home of the U-M Computer Science and Engineering Division.

The commission is co-chaired by Prof. J. Alex Halderman, whose work in election security and in exposing the vulnerabilities of electronic voting machines has positioned him as a preeminent expert in the field. His position on the commission will give Halderman the opportunity to strongly advise on security measures taken in the state.

“This first-of-its-kind effort brings together 18 local and national experts on cybersecurity and elections to secure elections and protect the integrity of every vote,” the Secretary of State office said in a release. “Together they will advise the secretary of state and Bureau of Elections on best practices.”

The commission’s further activities will include hosting meetings throughout the state and inviting citizen and expert input on election problems and security. The commission will deliver a set of recommendations to the secretary of state by the end of 2019. Its work is funded through a federal grant for election security.

Benson has said it will be a top priority to work collaboratively with local election officials and election experts to boost voter confidence, increase turnout, improve efficiencies, and secure the integrity of elections.

Previously, Halderman made multiple contributions to election security advocacy at the federal level. Since 2017, he’s testified before both the Senate Intelligence Committee and US House Appropriations Subcommittee on Financial Service and General Government to address vulnerabilities in the US voting system and a policy agenda for securing the system against the threat of hacking. He regularly discusses his work in major media outlets, describing the dangers of mobile, internet, blockchain, and purely electronic voting systems.

Halderman has been at the forefront of exposing vulnerabilities in electronic voting systems around the world. Working with the New York Times in 2017, he staged a mock election to demonstrate voting machine vulnerability. Among other solutions, he advocates for using optical-scan paper ballots and rigorous post-election audits, which together can ensure that computerized election tallies are accurate. 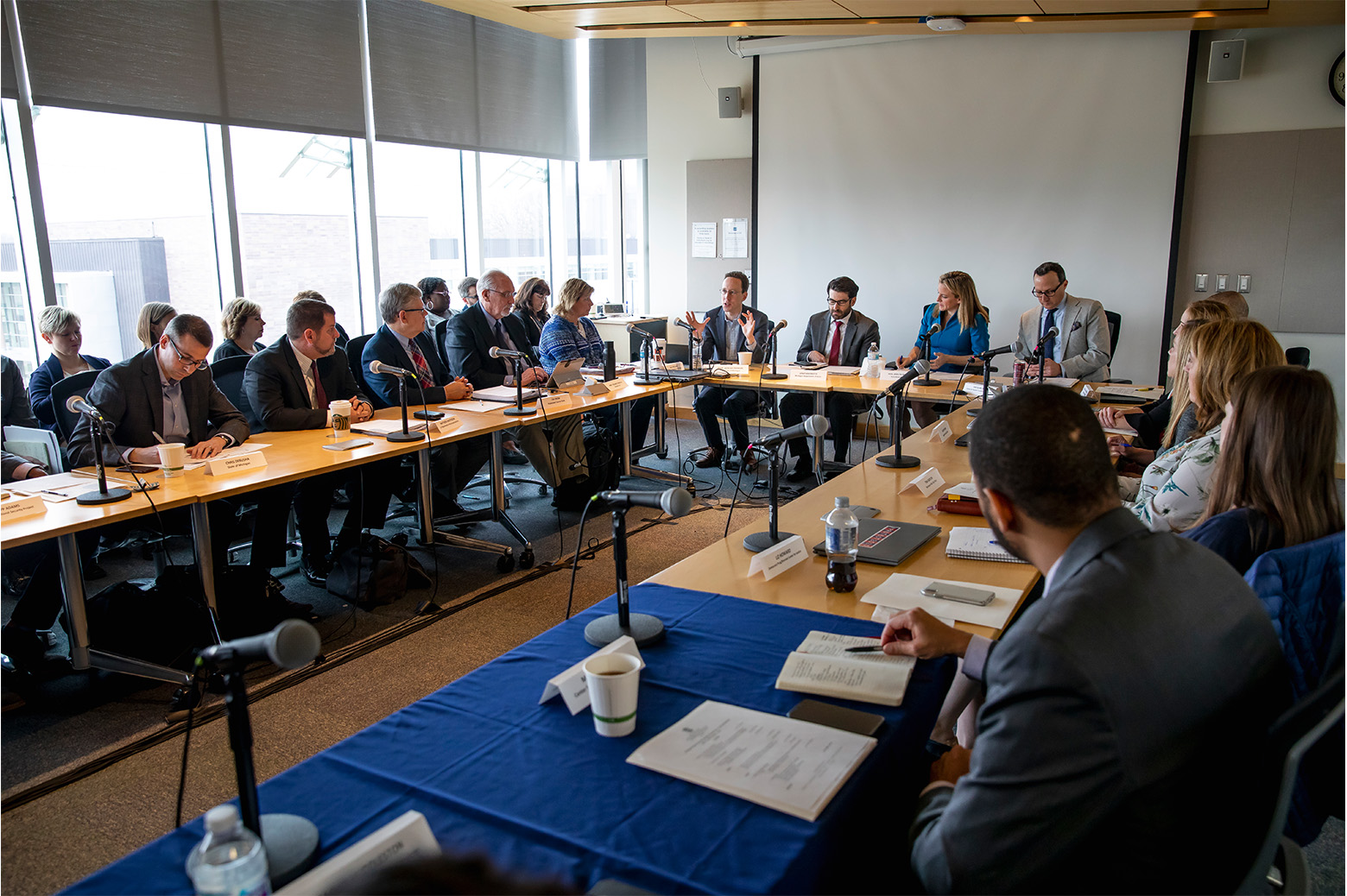 IMAGE:  18 experts on cybersecurity convened on North Campus to review and assess election security in Michigan.

Members of the commission include:

David Becker (co-chair), executive director and founder of the nonprofit Center for Election Innovation & Research in Washington, D.C.; former director of the elections program at The Pew Charitable Trusts; and former senior trial attorney in the Voting Section of the U.S. Department of Justice’s Civil Rights Division.

Rich DeMillo, Charlotte B. and Roger C. Warren professor of computer science at Georgia Tech and former dean of the College of Computing and director of the Information Research Center, previous international election observer and board member for nonprofit election security organizations.

Chris DeRusha, chief security officer for the state of Michigan and formerly with Ford Motor Co. and the U.S. Department of Homeland Security.

J. Alex Halderman (co-chair), professor of computer science and engineering at the University of Michigan and director of the university’s Center for Computer Security and Society.

Liz Howard, election security counsel with the Democracy Program at the Brennan Center for Justice and former deputy commissioner of the Virginia Department of Elections.

Walter R. Mebane Jr., professor of political science and statistics at the University of Michigan.

Maurice Turner, senior technologist at the Center for Democracy & Technology with special focus on the Election Security and Privacy Project.