by Hayley Hanway
EECS: Electrical and Computer Engineering
April 12, 2019
EECS-ECE alum Dr. Katie Bouman has helped expand our knowledge of the universe in a big way by shining light on one of the darkest mysteries in the cosmos.| Medium Read

Black holes have long-defined as being “invisible.” Obtaining an actual image of a black hole was believed to be impossible. Black holes are so far away that the only telescope capable of photographing them would be one the size of the earth.

However, thanks to an international team of over 200 scientists and a network of radio telescopes called the Event Horizon Telescope (EHT), we now have seen the impossible. It took two years, eight radio observatories on six mountains and four continents, and a U-M alum who’s become the face of the discovery. 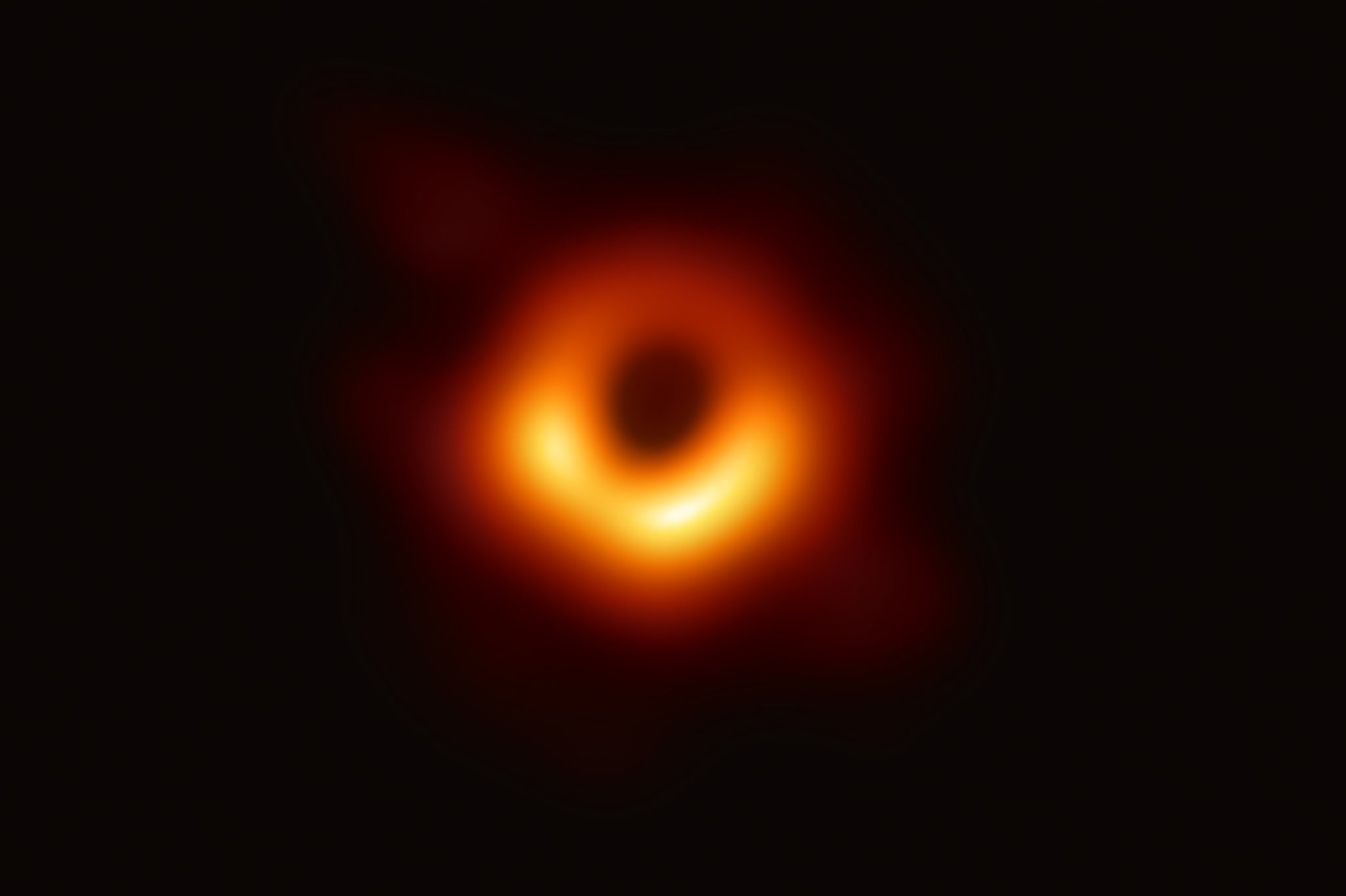 IMAGE:  The first ever image of a black hole located in the center of Messier 87 (M87), an elliptical galaxy some 55 million light-years from Earth. Image released by the National Science Foundation.

Dr. Katie Bouman earned her BSE in Electrical Engineering from U-M in 2011. A promising talent from day one, she received the William Harvey Seeley Prize in 2009, which is given to an EE student first in their class in their first year.

She took classes from EECS-ECE Professors Clayton Scott and Al Hero, who both remember her as one of their brightest students. Scott was so impressed with her that he offered to be her graduate advisor within six weeks of knowing her. Hero says the project she led for the Major Design Experience class was the most impressive student project he’s ever seen and was very similar to the work she’d do on the black hole project.

“Her idea was to use a cheap camera to take a picture of a musical score – that had coffee stains or distortions or was crumpled up – and then the computer would automatically play the music on the score,” Hero says. “It was very ambitious, but also really cool.”

Like with the black hole, Bouman was faced with an issue on how to restore an image well enough for a computer to be able to recognize it.

“She developed a sophisticated and elegant method that basically estimated the distortion pattern that came out of these very poor lenses, and then used that estimate to correct the lens,” Hero says. “She was just outstanding.”

Bouman’s solution worked, and on the day of the demonstrations, her team filled the atrium with various musical tunes, including the computer’s rendition of “Hail! to the Victors!” 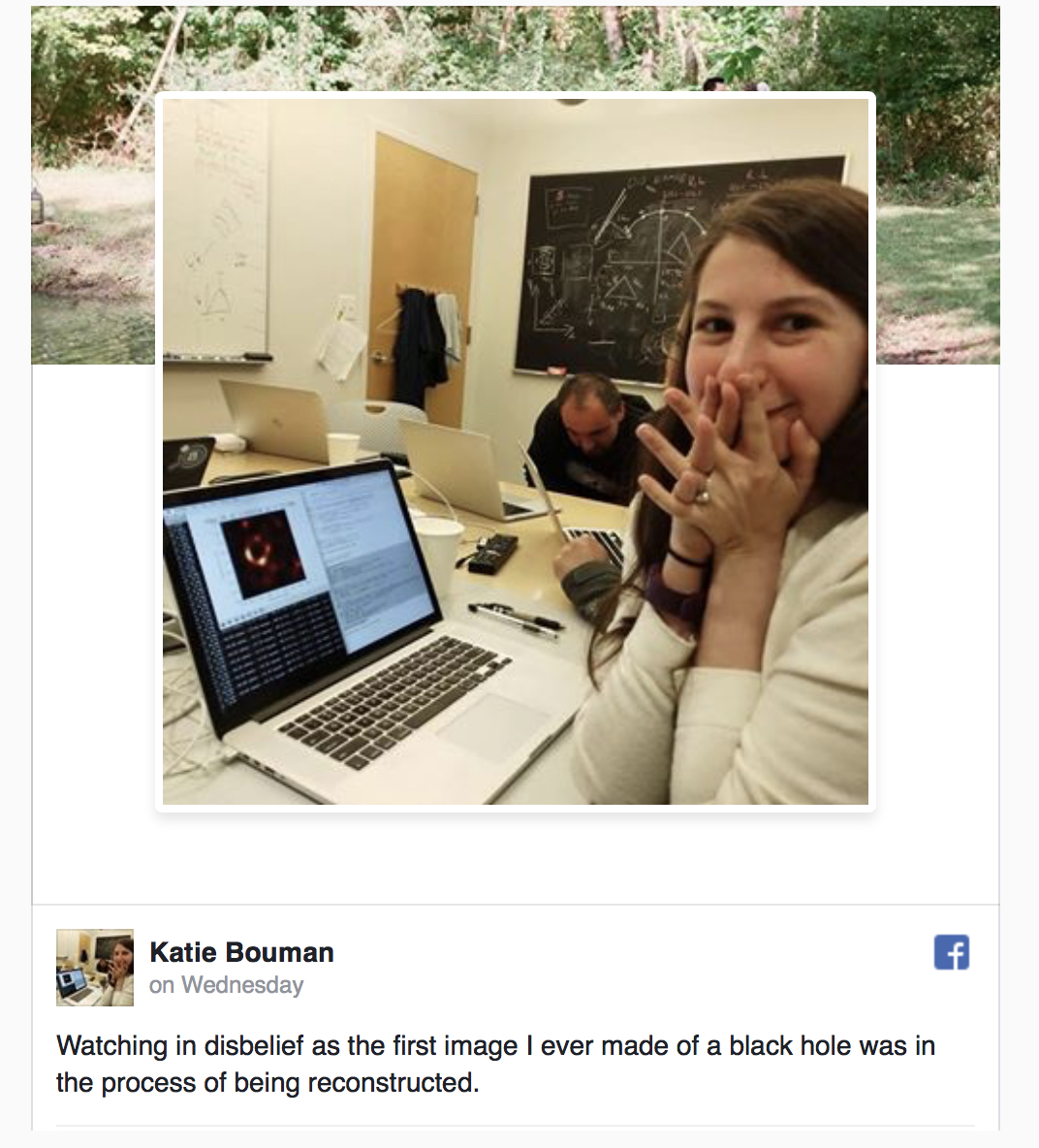 After U-M, Bouman enrolled as a grad student at MIT where she developed a crucial algorithm that helped devise the imaging method she would ultimately use for the black hole project. She spent three years directing the verification of images and the selection of image parameters to filter out the noise and give us a good look at the literal biggest secret in the galaxy: what a black hole looks like.

Black holes have mystified scientists for decades.  Despite its name, a black hole isn’t a hole at all – it’s a pocket of space full of a massive amount of densely packed matter. Black holes take up a relatively little amount of space considering their ridiculous amount of mass, so they ultimately warp the very fabric of space-time. They are the universe’s ultimate quicksand, from which not even light can escape.

Einstein first predicted the presence of black holes as part of his theory of relativity, but even he had doubts that the confounding phenomenon actually existed. Over the next century, more pieces of evidence assembled: massive energy signatures that couldn’t be explained by stars alone, the cosmic sound of two black holes colliding, and finally the detection of gravitational waves.

But we had never seen one.

“Pressing ‘go’ on a computer program I had written and immediately seeing a ring come into focus for the first time was amazing and exhilarating,” Bouman said to Newsweek. “We had prepared for years, but even so it was too easy! It was an unforgettable moment.” 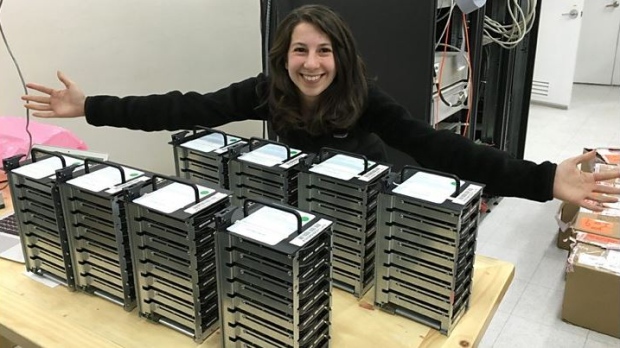 IMAGE:  Bouman poses with hard drives containing some of the petabytes of black hole imaging data collected by telescopes around the world. 📷: PBS

Bouman returned to U-M last year and gave a preview of her work, including a first look at the black hole image itself.

“I was struck by the enormity of the project and how cool it is to ‘see’ the invisible,” said Mingyan Liu, the Peter and Evelyn Fuss Chair of ECE, who met with Bouman while she was here. “What impressed me most is the unique impact of what she was doing in this application context.”

The image that Bouman helped create provides confirmation of more than a century of theory and will open up entirely new avenues of study. However, Bouman emphasized that she played only a part in the overall project and that she’s most proud of being part of the diverse team.

“No one algorithm or person made this image,” Bouman wrote in a Facebook post. “It required the amazing talent of a team of scientists from around the globe.”

More about the Black Hole image