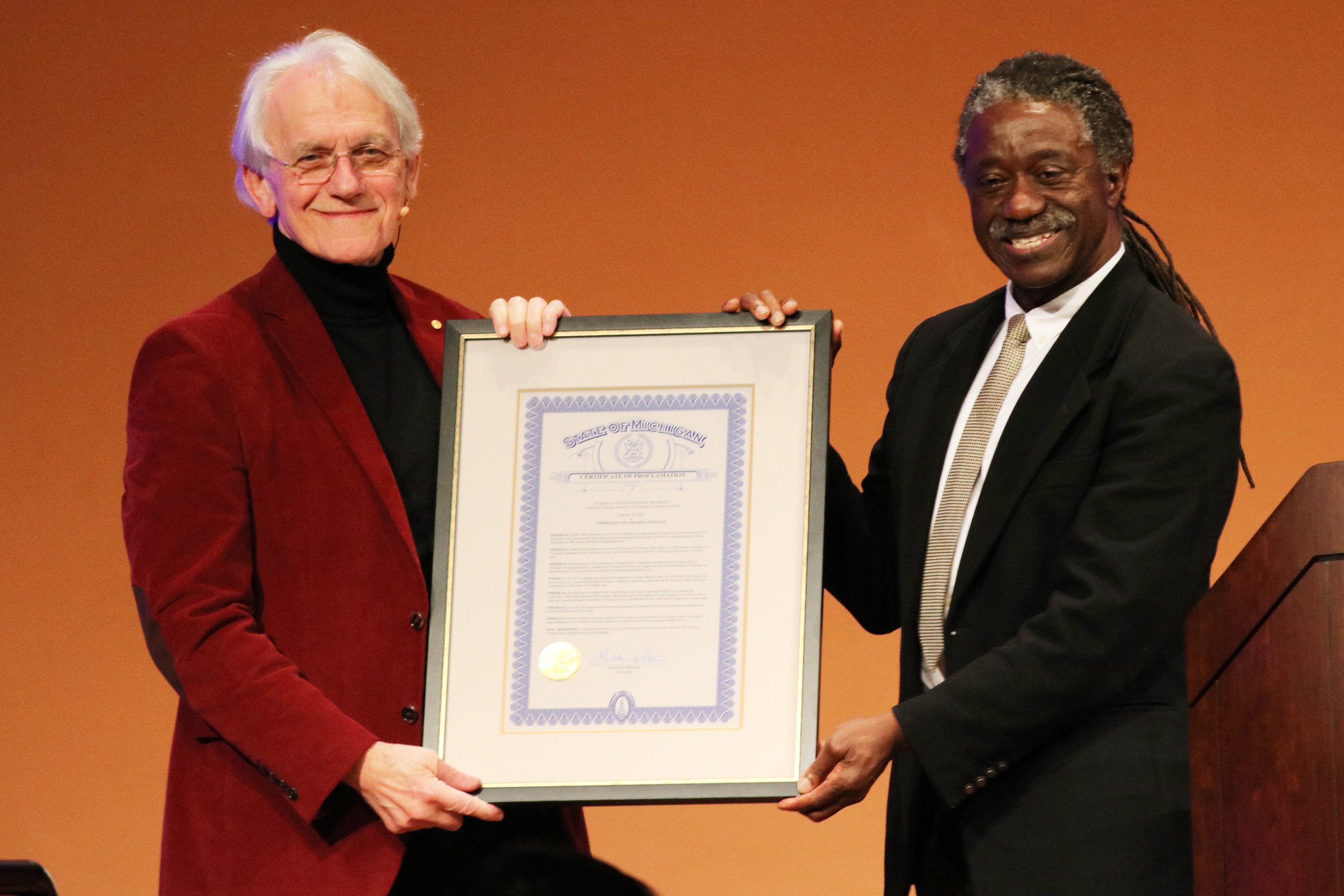 On Thursday afternoon at Rackham Graduate School, Gérard Mourou, 2018 Nobel Prize laureate in physics and founder of the University of Michigan Center for Ultrafast Optical Science, discussed his research on laser physics. Mourou and fellow Nobel Prize laureate Donna Strickland, who was unable to attend the event, each won a quarter of the prize for their work on chirped pulse amplification. Arthur Ashkin, developer of optical tweezers, will claim the remaining half of the prize.

Engineering Dean Alec Gallimore kicked off the event, titled “Passion for Extreme Light,” by acknowledging Mourou’s accomplishments and work at the University. Mourou holds the title of professor emeritus in electrical engineering and computer science, having taught at the University for 16 years before retiring in 2004.

Gallimore also noted some of the innovations that have emerged from CUOS, which he said will soon be renamed the Gérard Mourou Center for Ultrafast Optical Science. CUOS is the birthplace of IntraLASIK eye surgery and houses the world’s most intense laser, HERCULES.

“During his time at Michigan, he founded the Center for Ultrafast Optical Science, where he served as director for more than 14 years,” Gallimore said. “Since its beginning, more than 250 graduate students have produced roughly 170 patents, five startup companies and over 5,000 scientific publications, the safer, bladeless version of LASIK eye surgery was developed, and HERCULES, the world’s most intense laser, was born.” 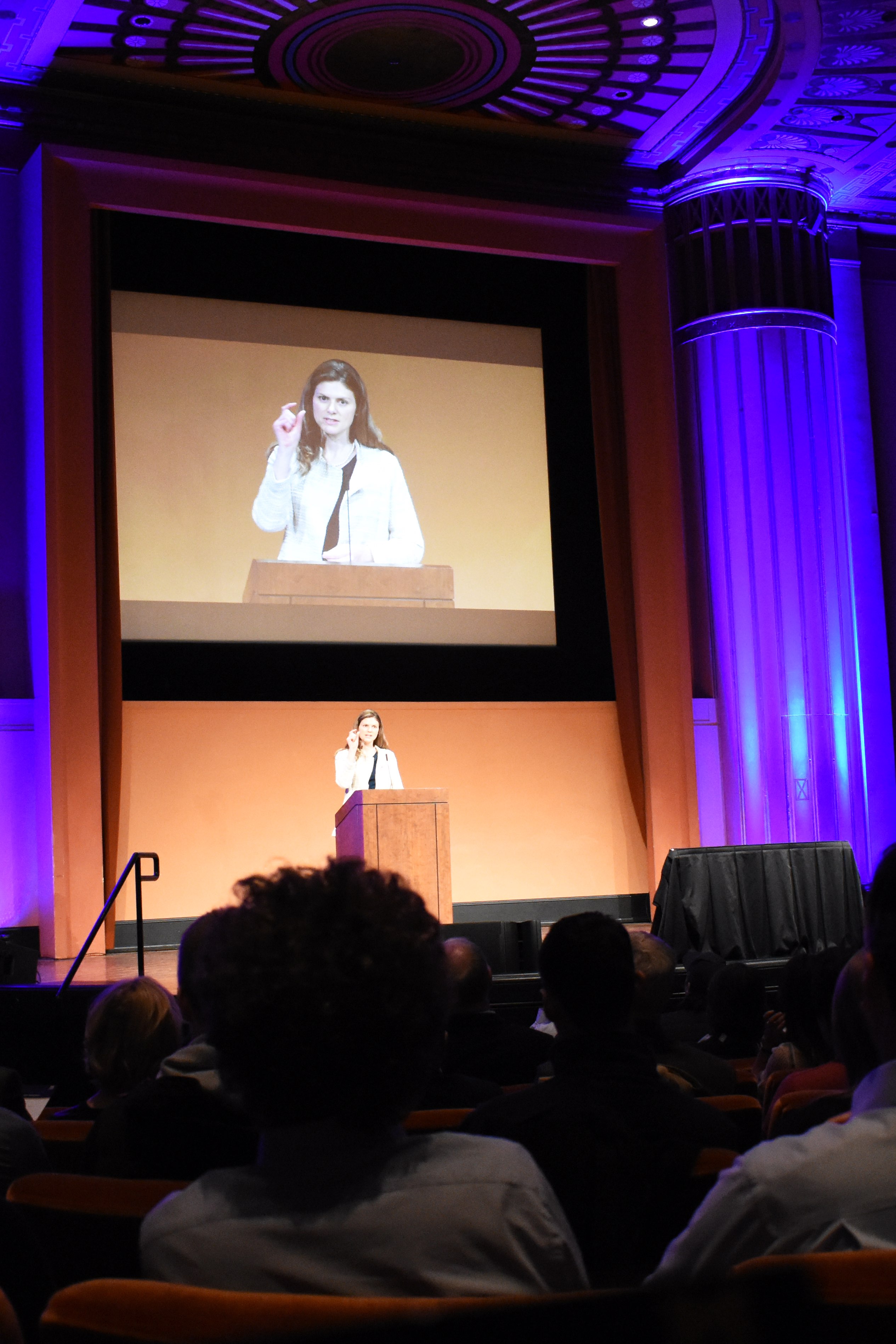 IMAGE:  Prof. Louise Willingale speaks about Mourou's work and legacy in the field of high-power lasers.

Next, several speakers presented opening remarks. Louise Willingale, assistant professor of electrical engineering and computer science, who studies laser-plasma interactions, emphasized the fact that Mourou is a pioneer in the field of high-power lasers.

“A Nobel Prize in physics is certainly not to be sniffed at, but what’s really inspirational to me is the high-field science legacy that Gérard has built here at Michigan and now worldwide,” Willingale said. “Mourou fervently continues to have the vision to push technological boundaries and test our imaginations in his quest for ever higher intensities.”

“It was at Michigan that the technology of CPA grew up and matured, finding new applications in science, industry and medicine,” Winful said. “Applications that include the femtosecond IntraLASIK technique that has now been used on millions of patients throughout the world, a direct manifestation of the impact of CPA on people’s lives.”

Mourou began his talk by discussing how high-intensity lasers are generated. Lasers generate coherent light, which can be emitted in waves or pulses. Mourou said to produce high-power lasers, light is stretched, amplified and then compressed.

“Because we have been able to compress this light, we can produce now this very, very high power,” Mourou said. “The power is expressed in petawatts. A petawatt is a thousand times the power of all the stations producing electricity in the world.”

Extreme light is capable of generating the largest field, largest acceleration, largest temperature and largest pressure. In the spirit of Alfred Nobel, it carries the best hope and opportunity for the future of science and society.Gérard Mourou, A. D. Moore Distinguished University Professor Emeritus, EECS
Tweet

By focusing a high-power laser, he added, huge power densities are created.

“You can create pressures, enormous pressure which corresponds to maybe millions, ten million Eiffel Towers on your finger,” Mourou said. “You are not going to be surprised we can accelerate particles with that kind of thing.”

Mourou then discussed different types of lasers across the intensity spectrum. He said chirped pulse amplification falls in the range of 1010 to 1015 watts per square centimeter of focused intensity. According to Mourou, the technique has been used in micromachining, the process of creating small details on the surface of materials, because femtosecond-length laser pulses can increase temperatures locally and specifically without creating damage.

Mourou said chirped pulse amplification can also be used in ophthalmology to improve eye surgery. While showing a video of cornea surgery, Mourou explained laser pulses can cut the cornea without hurting the tissue. 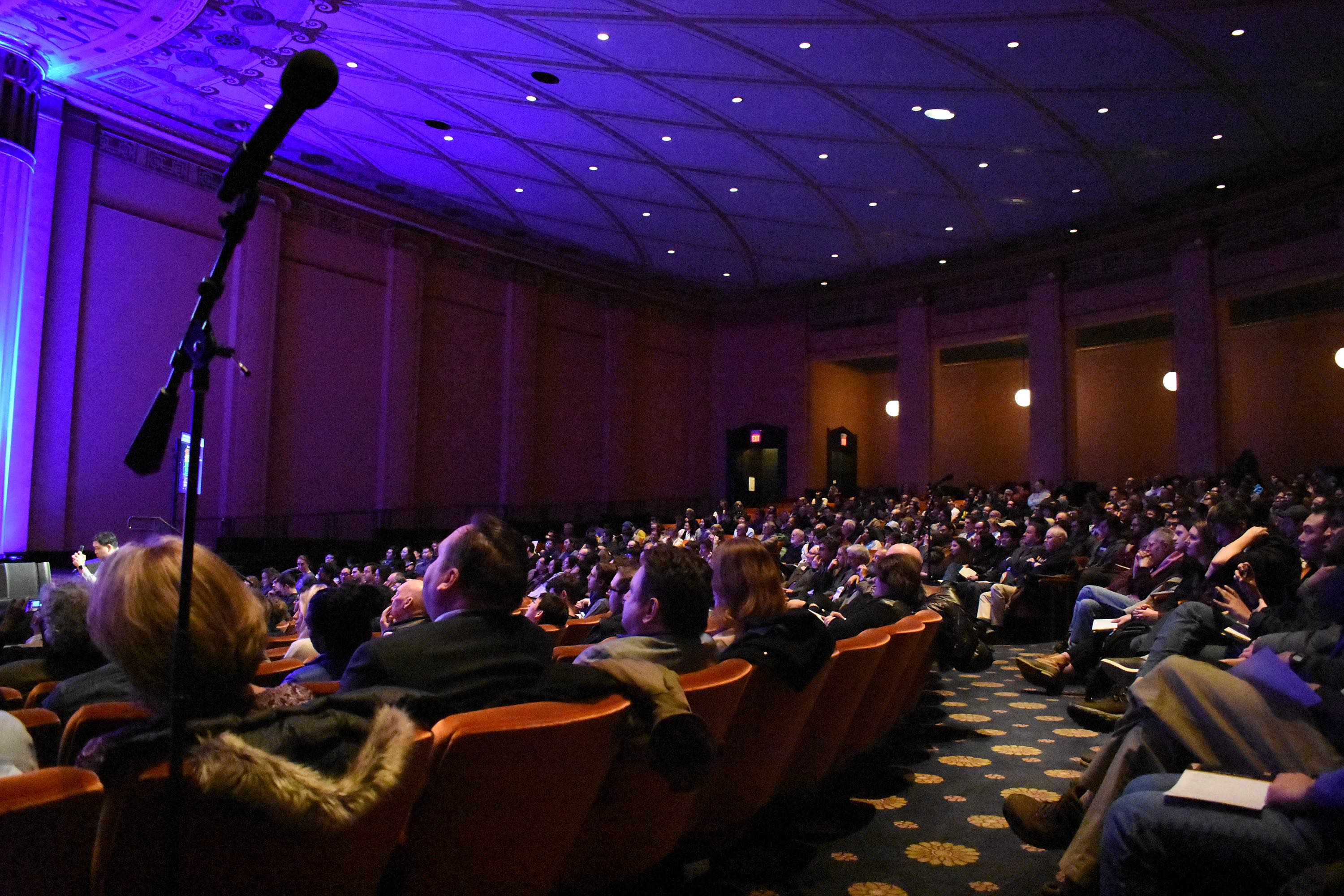 IMAGE:  The event was held in Rackham Auditorium.

“You can focus lasers within the cornea and, really, you can ablate the materials within, and if you scan the laser beam you will be able to make a flap, for instance,” Mourou said. “What you have is really the ideal scalpel.”

In the intensity range of 10^15 to 10^20 watts per square centimeter, Mourou said, lasers can accelerate particles to nearly the speed of light. At 10^20 to 10^25 watts per square centimeter, lasers can create high-energy protons, which have many medical applications. Mourou said proton therapyis better than traditional X-ray therapy in attacking tumors because it offers a more fine-tuned targeting.

“If you are using X-rays of electrons, you are burning the tissues before you reach the tumors because you deposit the energy on the way,” Mourou said. “With protons, it’s much less the case. You deposit a little amount of energy up to the tumors, but you can decide where you are going to deposit the energy.”

Mourou added high-energy protons can produce neutrons, which also have applications in cancer treatment. For instance, neutrons can be used to produce radioactive isotopes that target tumors.

Overall, Mourou said he is excited about the medical applications of high-power lasers because laser-based devices would be smaller and less expensive than traditional machinery.

“Instead of using big reactors and big accelerators and all that, we can do that maybe in the hospital, maybe near the bed of the patients,” Mourou said. “There’s much more freedom and it’s less costly.” 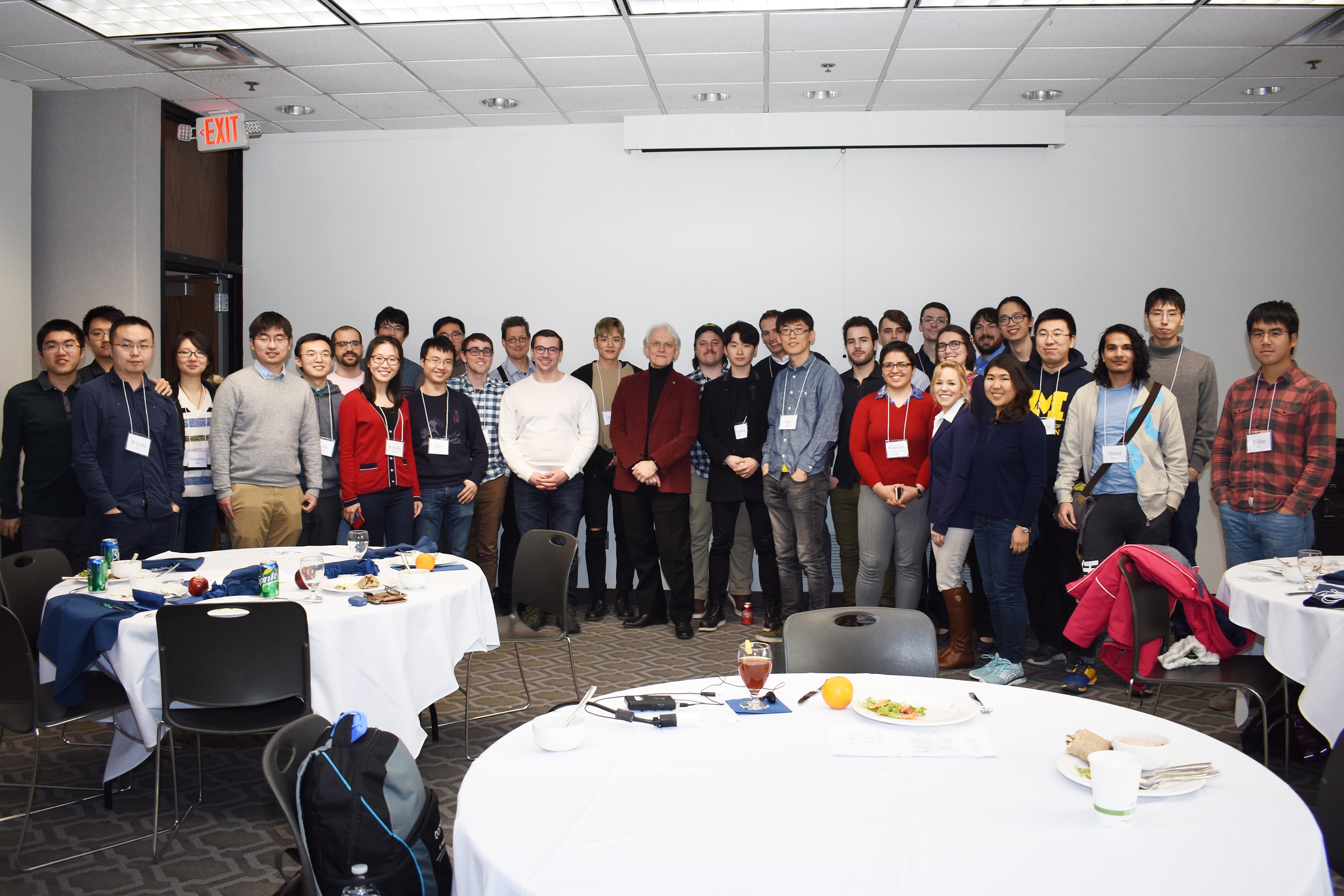 IMAGE:  Mourou had lunch with EECS students earlier in the day and spoke about his inspirations and career path, as well as his predictions for the future of the field.

“Nuclear energy is certainly the best, but you have one problem, of course,” Mourou said. “You are leaving these elements which are radiotoxic for a lot of years.”

In addition, Mourou described the use of chirped pulse amplification in removing space debris. Due to space missions, he said, there is currently the equivalent of four Eiffel Towers of debris in orbit, limiting space access. Larger pieces of debris of about the size of a washing machine can be detected with radar, but Mourou said smaller pieces are harder to detect.

“You have millions of them which are the size of a bullet, like centimeters size, but these bullets, they go at 50 times the speed of the fastest bullet,” Mourou said. “So if you get one of these bullets, that ruins your day.”

According to Mourou, a coherent amplification network laser can produce laser pulses that pull debris out of orbit.

“What we do, we just focus a laser on the debris and we create a puff of matter,” Mourou said. “This puff of matter is going to produce a rocket effect, and we de-orbit the debris, and the debris will go into the atmosphere and get burned.”

To conclude his talk, Mourou summarized the importance of his research and its relevance to the goals of the Nobel Prize.

“Extreme light is capable of generating the largest field, largest acceleration, largest temperature and largest pressure,” Mourou said. “In the spirit of Alfred Nobel, it carries the best hope and opportunity for the future of science and society.”

Several audience members posed questions following the talk, including one on whether high-power lasers could generate a black hole. Mourou said the creation of a black hole could be simulated in the lab since the accelerations created by high-power lasers reach 10^25 times the acceleration due to gravity. Mourou said this ability to simulate black holes is convenient because real ones have an incredibly long lifespan.

Engineering junior Xiuwen Chen said she appreciated having the opportunity to learn about future avenues for research in Mourou’s field.

“I came to this event because I want to know more about what he was researching while he was at Michigan and I guess what his future plan is,” Chen said. “I found his last lecture about how he was using the technique that he developed to clean up space, I think that was really cool.”

Update: Mourou has several family members who still live in Michigan. Before returning to France, Mourou took time to visit his grandchild’s high school to speak to the students about his work and STEM careers.

This story orginally appeared in The Michigan Daily. The updated was provided by ECE staff.