by Hayley Hanway
EECS: Electrical and Computer Engineering
February 13, 2019
PhD student Brandon Russell is awarded the Rackham International Student Fellowship for his research on magnetic fields in high-energy plasmas, which could help advance the development of clean energy and our understanding of energetic astrophysical phenomena.| Medium Read
Enlarge 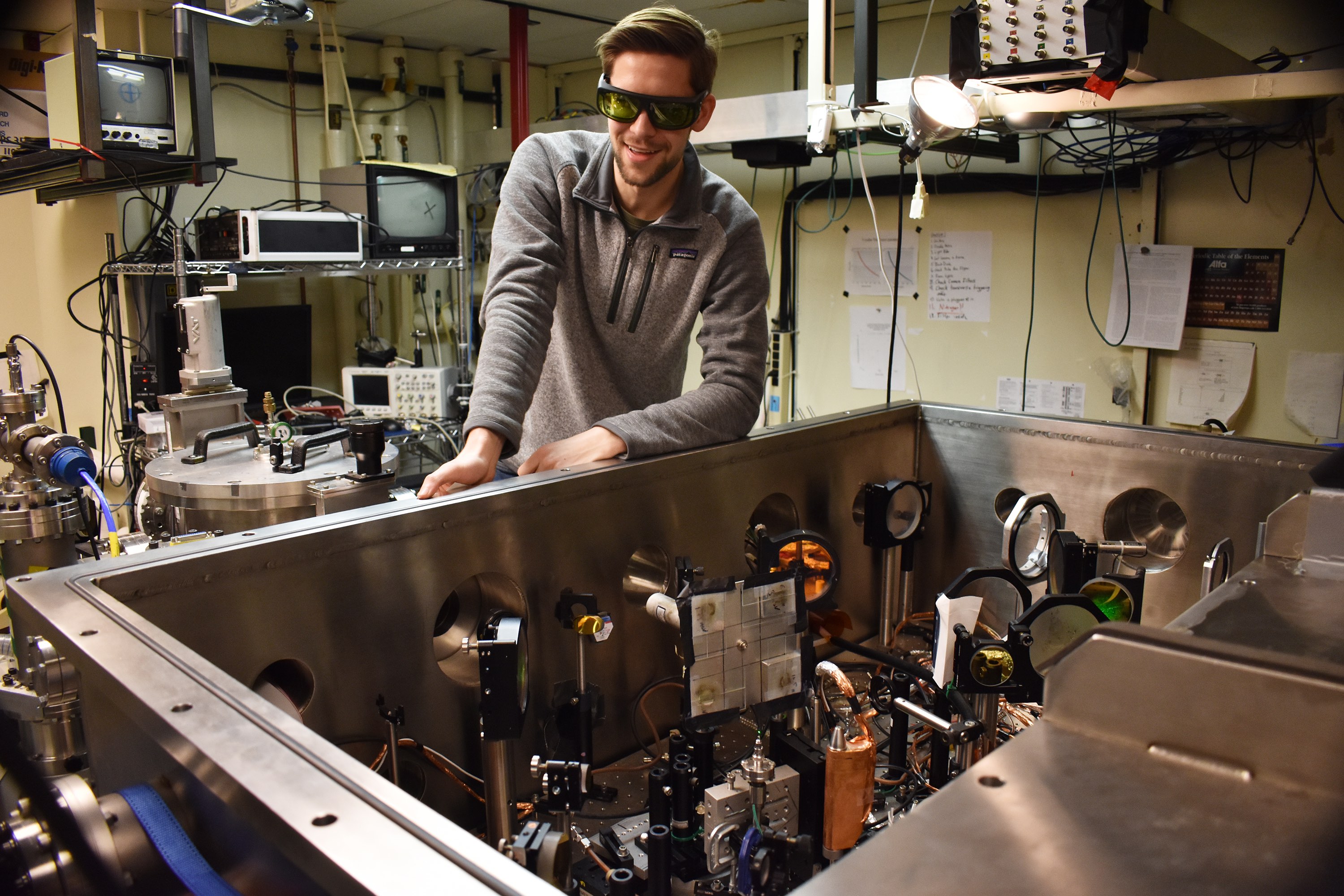 “I grew up in Canada, and I could see all of the constellations and even the Northern Lights from my house,” said Brandon Russell, a 2nd year PhD student. “It’s pretty awe-inspiring to look up and not comprehend what you’re seeing. I’d really like to understand space phenomena.”

This year, Russell received a Rackham International Student Fellowship award. The Fellowship is given to international students who demonstrate outstanding academic and professional promise.

Russell’s research focuses on the intersection between electrical engineering and plasma physics. Russell works at the Center for Ultrafast Optical Science, home of HERCULES – which has been the world’s highest intensity laser for many years – and the T-cubed laser. There, Russell works with ECE Assistant Professor Louise Willingale to understand the interaction and generation of magnetic fields in high-energy laser-generated plasmas. 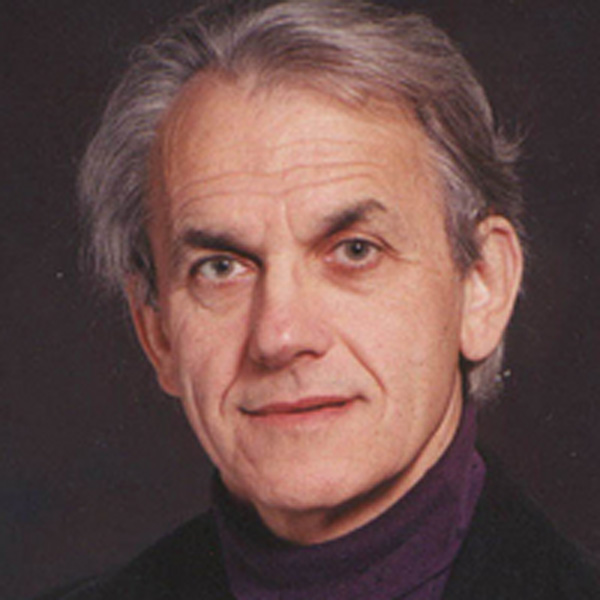 Gérard Mourou, 2018 Nobel Laureate and A. D. Moore Distinguished University Professor Emeritus, was responsible for the initial construction of the T-cubed and HERCULES laser systems.

“It was immediately clear that working with Brandon would be a very exciting collaboration,” Prof. Willingale said. “I am particularly impressed with his ability to draw knowledge from many scientific areas to grasp his own research topics, and I find it inspiring that, even early in his PhD, he has developed his own well-considered research ideas.”

Russell recently lead an experiment on the Omega EP laser system at the University of Rochester, which looked at the interaction between a magnetized plasma moving near the speed of light and a set of obstacles. This was done by shooting a very energetic laser at an aluminum foil with a series of holes or raised “blobs” of glue. Russell then used protons to image the electric and magnetic fields on the surface of the target. This allows him to calculate what these fields were and how they evolved. This information could provide insight into how very high energy plasmas are affected by objects, like planets or other objects in space – which could eventually include spacecraft. 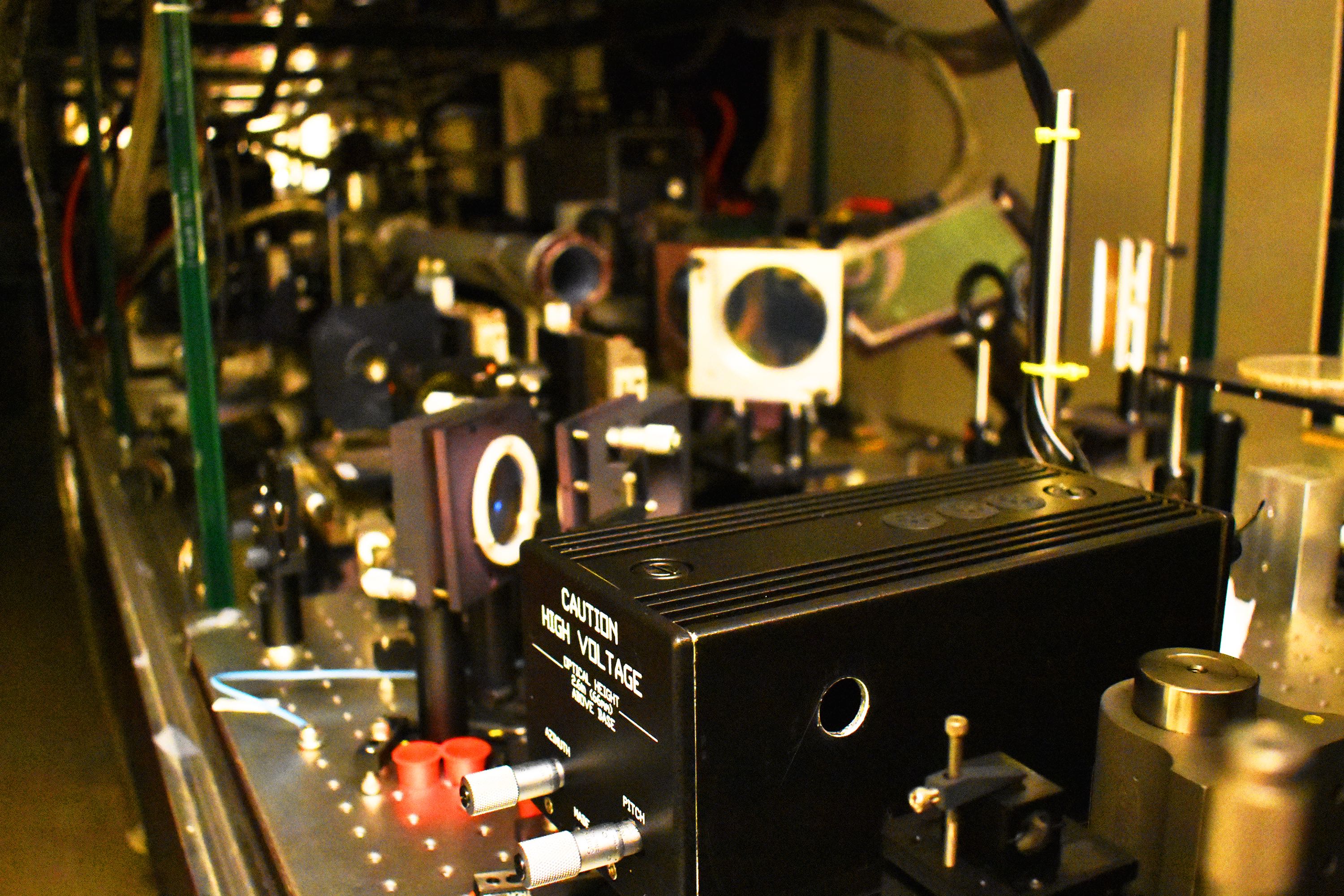 IMAGE:  Russell works regularly with the T-cubed laser (pictured). The laser is so large, it encompasses several rooms.

“Our understanding of space plasmas isn’t that great, especially in these regimes where things are moving near the speed of light,” Russell said. “Our research is fundamental to high energy plasma physics and could advance the development of sustainable energy sources, like nuclear fusion.”

The lasers Russell uses for his work are so advanced that he and his team are able to study areas of plasma physics, which were previously inaccessible. It’s one of the reasons Russell is glad he came to U-M.

“We obviously have a very good program here and a lot of resources,” Russell said. “No matter which professor you talk to, everyone at Michigan has done something very important.”

While the quality of research was important to Russell, what impressed him most about U-M was the welcoming and supportive atmosphere. Russell says that the professors here encourage students to share their opinions and ideas, even if the students are challenging the professor’s conclusions.

“It’s a great environment to have people who are brilliant and want to do really positive research,” Russell said. “They’re actually in it for the science.”

That commitment and passion is something Russell shares. As a kid, he curated an impressive rock collection with plans to become a geologist, or perhaps a paleontologist who’d dig up Alberta’s next famous fossil. He was fascinated by electronic devices and focused on nanotechnology in his undergrad.

“It was interesting, but I wanted something where you blow things up,” Russell said.

It’s a great environment to have people who are brilliant and want to do really positive research.Brandon Russell, ECE PhD student
Tweet

He got his wish – maybe a little too literally – when in his first year at U-M, he destroyed a rather expensive piece of equipment.

“The issue with high-energy lasers is that if you forget a filter – or anything, really – you’ll definitely blow something up,” Russell said. “So I forgot a filter and blew up a spectrometer.”

Everyone was very understanding, Russell says. One advisor even took time to tell him about previous brilliant students who broke lots of important equipment. Russell appreciated the forgiving environment and has not blown up anything unintentionally since.

While he hasn’t decided what career path he wants to follow post-PhD, the Rackham Fellowship allows him to continue to investigate astrophysical anomalies and expand our understanding of the universe.

If you’re interested in learning more about plasma research, check out our youtube playlist: Michigan Institute for Plasma Science and Engineering, or visit mipse.umich.edu.