Professor emerita and transgender advocate Lynn Conway stressed the importance of embracing social change and imparted wisdom from some of history’s brilliant minds to University of Michigan graduates on Sunday.

Conway delivered the 2018 Winter Commencement address to graduates, friends, family members and others at Crisler Center. A U-M professor emerita of electrical engineering and computer science and an internationally recognized transgender advocate, she also received an honorary Doctor of Science degree.

About 2,300 degrees were conferred at Winter Commencement, with about 900 graduates attending the ceremony.

Conway told them they were embarking on their journeys in an era when evolving technologies connect and empower people in previously unimagined ways. In the social age ahead, she said, they will encounter increasingly diverse, often conflicting, ways of being, “giving ever deeper meaning to the old maxim — ‘Consistency is for small minds.’” 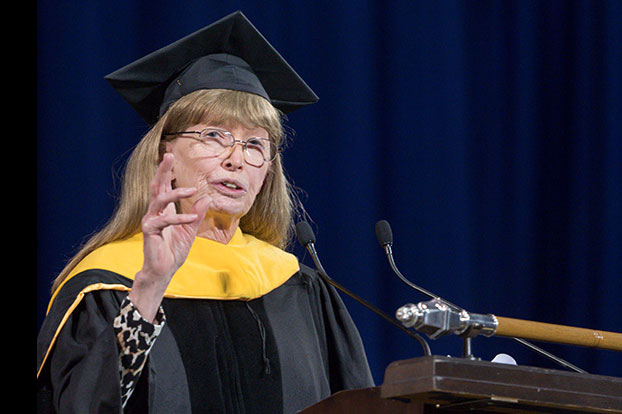 “By focusing on building your social capital as learners and contributors, innovators, leaders and explorers — instead of merely seeking money and formal positions and the trappings of power — you’ll expand your social agility and your lifelong opportunities to team up with cool people, go exploring, have exciting adventures, and leave tracks behind,” Conway said.

“By embracing, rather than fearing, accelerating social change, you’ll experience a most wondrous effect: You’ll live far further into the unfolding techno-social future than you ever dared dream.”

Conway then shared the words of several thinkers that have resonated with her over the years, including those from Winston Churchill, Steve Jobs, Hunter S. Thompson and Mary Oliver.

These quotes imparted various lessons, from Jobs’ belief in the importance of not wasting one’s time living someone else’s life to philosopher Eric Hoffer’s claim that in times of change, the learners inherit the Earth.

In closing, Conway urged the graduates to always mentor and learn from the young ones who come after them.

“Finally, thinking further ahead, to when you are 80, what words will you leave to guide the young and their children and grandchildren as they nervously gear up to surf the wondrous waves of life’s unfolding experiences?” she asked.

Besides Conway, other honorary degree recipients were: 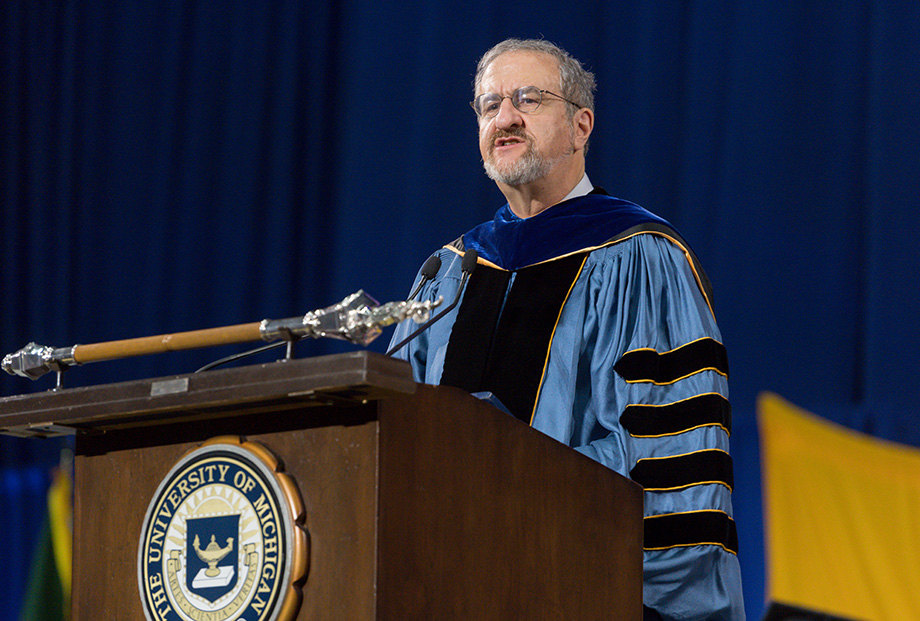 IMAGE:  President Mark Schlissel told graduates Sunday’s ceremony was “part of your lifelong journey, as a member of the Michigan family, to challenge the present and to enrich the future.” (Photo by Daryl Marshke, Michigan Photography)

In his remarks, President Mark Schlissel discussed the ways U-M students have contributed to positive change and how they are prepared to continue to change the world in the future.

Schlissel said students have contributed to change for the common good on campus and beyond, including mobilizing student voters for the Big Ten Voting Challenge, advocating for increased visibility of campus mental health resources, and launching a company that redirects medical supplies to communities in need.

Students have advocated for the university to address climate change and college affordability, and like students, the university has dedicated itself to change through measures like the Go Blue Guarantee and the decision work toward carbon neutrality, Schlissel said. 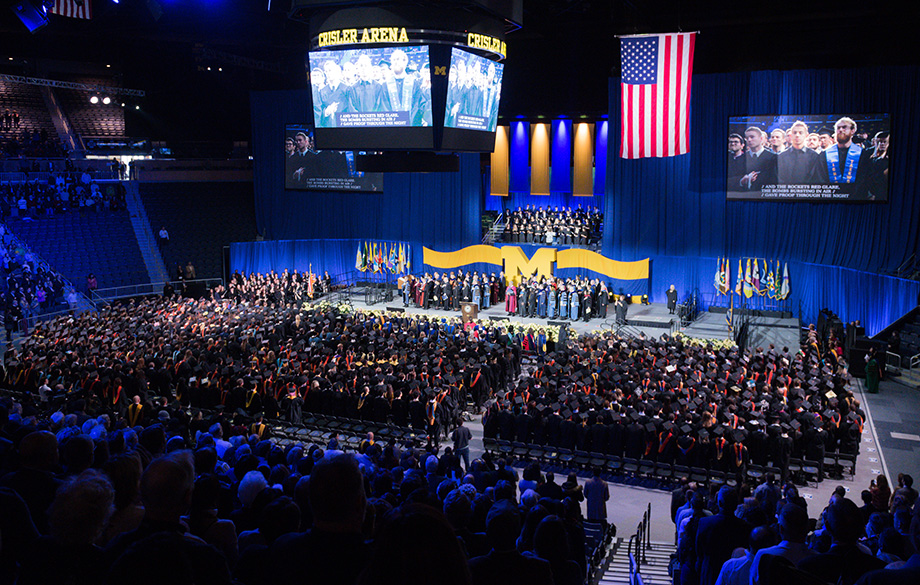 IMAGE:  Friends, family and other members of the U-M community joined graduates in celebrating their accomplishment at Winter Commencement on Sunday at Crisler Center. (Photo by Daryl Marshke, Michigan Photography)

“Graduates, your accomplishments to this point — as impressive as they are — pale in comparison to those that lay ahead,” Schlissel said. “It’s why we call the ceremony today commencement, not completion. It’s part of your lifelong journey, as a member of the Michigan family, to challenge the present and to enrich the future.”

Provost Martin Philbert quoted cellist Yo-Yo Ma, who once said he revisits music to play again and again because at each stage of life, one goes back and discovers new things. Philbert urged the graduates to do the same and “revisit the ideas that have captivated or challenged” them.

“As you re-examine these things over the years and decades, you will gain new insights and new understandings, both of yourself and of the world,” Philbert said. “You are ready, now, to move to new places, new jobs and new friendships. As you do so, we hope that you will take with you the commitment to learning and growing that has been part of your life here at the University of Michigan.” 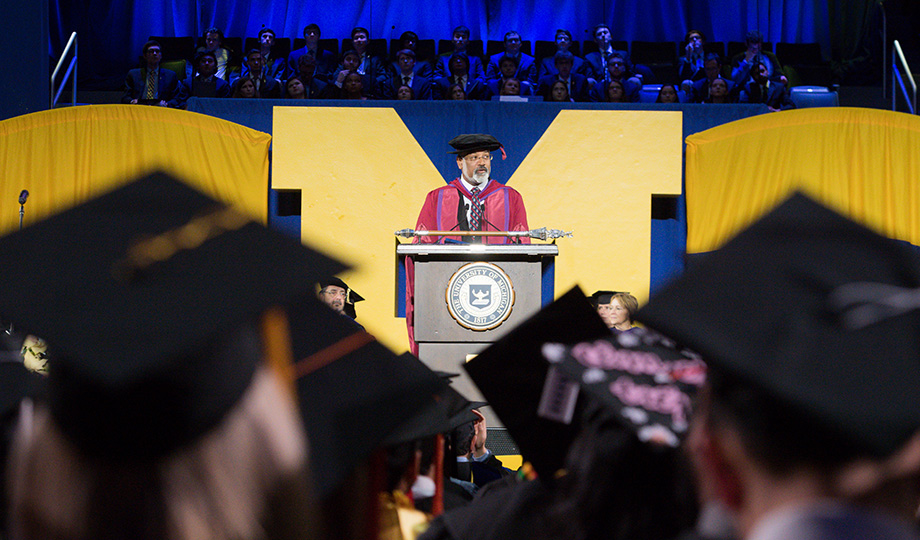 IMAGE:  Provost Martin Philbert urged graduates to “revisit the ideas that have captivated or challenged” them as they go through life. (Photo by Daryl Marshke, Michigan Photography)

Faculty Senate Chair Neil Marsh, professor of chemistry and of biological chemistry, focused on how graduates will navigate the unplanned and surprising nature of the world.

“There’s no avoiding it: The world is uncertain and chaotic,” Marsh said. “This means you will inevitably be frustrated in your progress towards your goals, but also encounter unexpected opportunities — so seize those opportunities!”

Graduates Jiten Parbhoo and Kavitha Lobo both spoke during the ceremony, advising their fellow graduates to treat every experience as a learning opportunity and that they positively impact the world by being true to themselves and their values.

“My wish for each one of you is to find your deeper self, come to like that person, and have the courage to stand up for what you truly believe in,” Parbhoo said.

The 2018 Winter Commencement Ceremony took place in the Crisler Center on December 16th. Lynn Conway's introduction and speech begins at 1:11:45.

Thank Lynn Conway for your cellphone