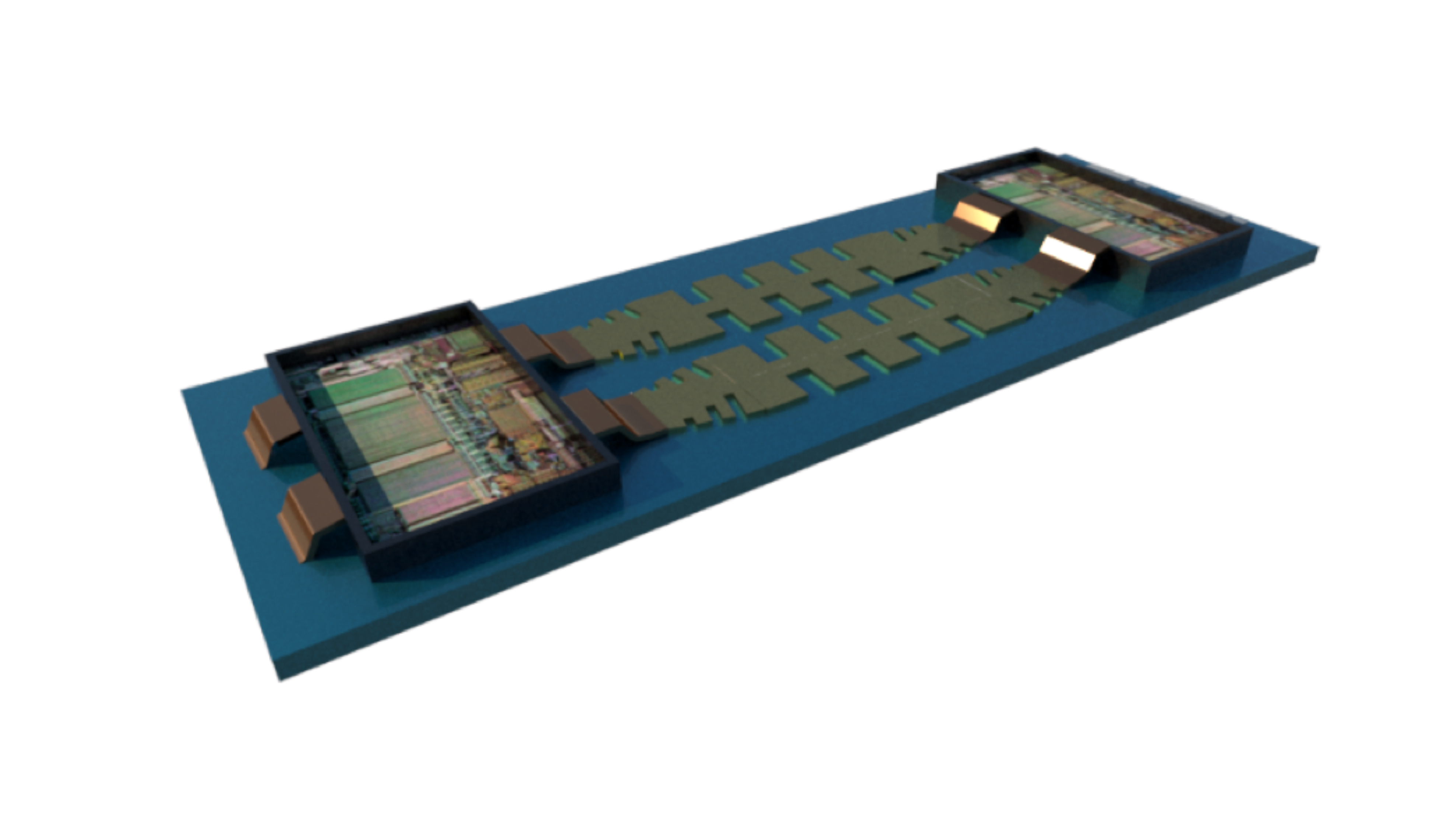 Michigan Engineering researchers are addressing a performance bottleneck that currently exists in the information transfer between electronic chips located a few centimeters apart in a computing system. Led by EECS Prof. Pinaki Mazumder, the researchers’ work in making these small but critical connections – dubbed the “last centimeter barrier” – will enable a new generation of electronic systems with ultra high speed data transfers.

Electronic chips such as processors, GPUs, and memories currently use metallic wires comprising copper, aluminum, or metal alloys to connect internal building blocks and circuit elements. For long-distance and higher-speed applications, connections are made via much faster optical interconnects. These two technologies are drastically different in terms of materials, process technology, physics of functioning, and they also operate at two different ranges of frequencies.

Optical interconnects, though typically high speed, are not energy-efficient for short range communications of 15 cm or less and are, therefore, not suitable for chip-to-chip interconnect. Traditional metal interconnects have bandwidth limitations and can be susceptible to crosstalk at high speed.

Identifying an alternative high-speed interface without these shortcomings has remained an open challenge.

In a quest for a new interconnect paradigm, Mazumder’s team has leveraged the interaction between electromagnetic waves and sub-wavelength scale patterned materials. Over the past decade, research in this area has been pursued by a handful of material scientists from institutions in the UK, USA, and China, albeit with a context mainly focused on sensing and imaging. Mazumder’s group took a different route in utilizing the new field of subwavelength terahertz optics with the goal of creating new ultrafast interconnects that would maintain compatibility with existing CMOS technology. CMOS is the technological basis for the bulk of today’s commercial semiconductors.

After years of research, Mazumder’s team has developed terahertz surface-wave interconnects, a new type of channel that transfers signals in the form of spoof surface plasmon polariton (SSPP), which is a special, surface bound electromagnetic wave in patterned metal using metamaterial engineering.

SSPP waves can be immune to crosstalk and can propagate a few centimeters without significant performance loss. SSPP interconnects possess the advantage of CMOS compatibility and their energy-economic quasi-electrical mode can transfer data without requiring excessive energy. Their quasi-optic mode can provide high bandwidth transmission by overcoming conventional limits.

“Through the use of SSPP waves, we have demonstrated that a terahertz surface-wave based data bus can provide a nearly 300 Gbps data transfer rate per channel over a distance of nearly one centimeter,” said Mazumder. “These results indicate the remarkable potential that these new interconnects hold for becoming the next generation state-of-the-art for high speed inter-chip communications.” Notably, today’s conventional interconnects operate at rates of up to about 5 Gbps.

The technology has been patented and Mazumder is currently engaging with a manufacturing partner to fabricate initial devices.

Mazumder’s research for this project was partially funded by a research grant from Air Force Office of Scientific Research (AFOSR) and by a grant from the National Science Foundation (NSF). The research findings have been published by the eminent British journal The Royal Society Proceedings A, in IEEE Transactions on Terahertz Technology, as well as in Trans. on Communications.

In addition to SSPP interconnect technology, Mazumder’s research group has performed extensive research on subwavelength electromagnetics for VLSI applications such as chain of nanoparticles and nanowires at optical and infrared frequency domain, high-speed spoof plasmon switching, surface wave based analog-to-digital converter, interferometer, and Boolean adders. Mazumder’s group has been awarded five US patents and has published 40 research papers in the field of terahertz engineering.