by Jessica Petras
November 7, 2018
Weber passed away on October 18, 2018. During his tenure at the University of Michigan, he taught in both the Civil and Environmental Engineering and Chemical Engineering departments.| Medium Read
Enlarge 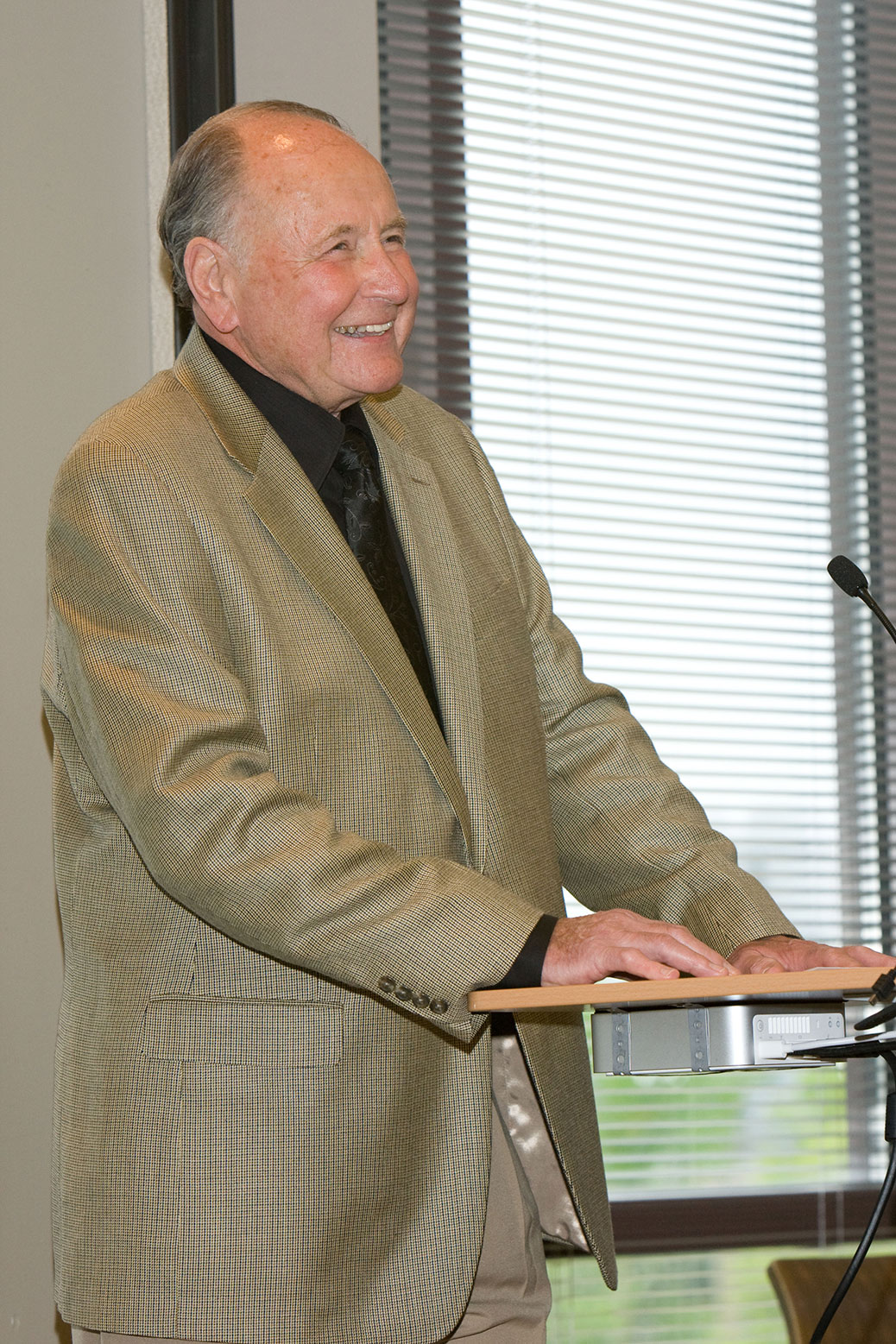 In 2004, the journal Environmental Science & Technology published a special issue dedicated to the career of Walter J. Weber, Jr. The feature story began with a full-page photo of Weber, standing in the reflecting pool outside the Lurie Engineering Center in a suit, pants rolled up to his knees and a smile on his face. It’s the photo of a man whose passion for sustainable water management had a profound impact on the field of environmental engineering and on the University of Michigan.

In 1963, he joined the faculty at the University of Michigan as a professor in the departments of Civil and Environmental Engineering and Chemical Engineering. At that time, public concern about contamination of natural waters was growing. Just two years earlier, President John F. Kennedy delivered a special address to Congress calling for new technologies to treat and reuse wastewater as a way to counteract increasing demands on the world’s fresh water supply. Weber was in the vanguard of researchers who embraced this idea of water reclamation. His passion for water purification and sustainability would shape his career and bring him to the forefront of his field.

Weber passed away on October 18, 2018 at the age of 84 at Huron Woods Memory Center after a brief illness. He is survived by his four daughters, many grandchildren, and his brother.

“I was very lucky to work with Walt on PhD committees before he retired in 2009; as a leading authority in environmental engineering, his bold vision for our field was an inspiration to our students,” said Jerome P. Lynch, Civil and Environmental Engineering Professor and Donald Malloure Department Chair.

Weber’s prescient prediction of an approaching wave of formidable global energy-water challenges—and the role of research in understanding the complicated interplay between the two finite resources—made him instrumental in strengthening the department’s energy-water efforts.

“Walt’s presence will be missed, but his impact is enduring,” said Larson, who served as the then-department chair when Walt came to Chemical Engineering. “I have fond memories of working with Walt, and have seen his impact on the discipline world-wide in numerous ways.”

Weber generously endowed a lecture on energy and environment, which the Chemical Engineering Department supports as a lasting legacy to his impact.

Weber’s extensive list of honors and awards includes several notable highlights: elected to the U.S. National Academy of Engineering (1985); named the Gordon M. Fair and Earnest Boyce Distinguished University Professor of Environmental and Ecological Sciences and Engineering at the University of Michigan (1994); honored by the American Chemical Society for leadership and contributions to the field of environmental science and engineering with a three-day national colloquium (2003); chosen as one of the “One Hundred Engineers of the Modern Era” by the American Institute of Chemical Engineers for his lifetime of work in the area of environmental process dynamics & system sustainability (2008).

An international leader in the development of advanced technologies for water treatment, pollution control, and environmental restoration, Weber devoted his life to protecting the global water supply and inspiring his students to do the same. Over the course of his career, he mentored thousands of engineering students and graduated over 75 PhD students.

“Dr. Weber had a profound impact on my life,” said Qingguo “Jack” Huang, one of Weber’s PhD students from 1998-2002 and now a professor at the University of Georgia, Griffin. “[He] emphasized critical thinking, always encouraging us to get to the bottom of things to have a systematic, logical, and critical analysis.”

Alexander P. Mathews, a former PhD student of Weber and now a professor at Kansas State University, recalled that “it was a great time to be a student performing cutting edge research with Professor Weber in the early 1970s. He was at the pinnacle of success and achievement in advancing the environmental engineering field at that time.”

Beyond that, Mathews added, “Professor Weber was a kind and gentle person devoted to student welfare and student success. His legacy will be enduring.”

Another of Weber’s former PhD students, Domenico Grasso, is now the Chancellor of the University of Michigan-Dearborn.

“I am one of the fortunate individuals who can proudly claim Walt as my major advisor and mentor,” Grasso said. “To be sure, whatever professional success I may have realized over my career can be directly traced back to my Michigan experience broadly and working in his laboratory more specifically. Sadly, the field has lost one of its giants.”