Chemical Engineering
October 2, 2018
He and a friend were looking for entrepreneurial projects when they first arrived at Michigan and started the business when they were sophomores.| Medium Read
Enlarge 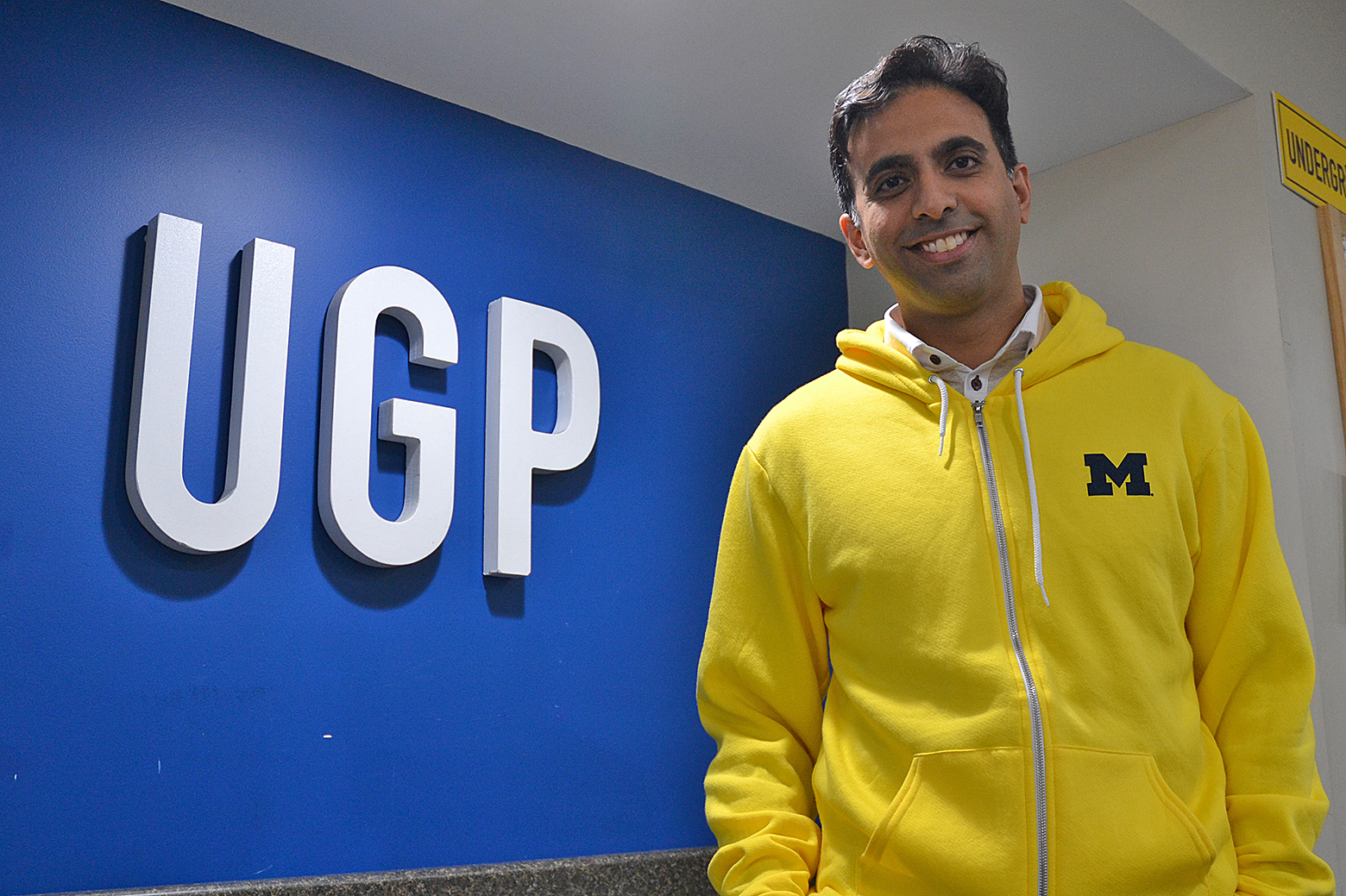 Rishi Narayan (BSE 2003, MSE 2005) is co-founder of Underground Printing (UGP), a national custom printed apparel and promotional products provider headquartered in Ann Arbor. (https://undergroundshirts.com/). Narayan and his childhood friend, Ryan Gregg, started the company in 2001 when they were sophomores at the University. Today, UGP has 35+ locations; these stores and offices are located in familiar college towns and big cities across the country.

So when Rishi came to Ann Arbor as a freshman, he was looking for an outlet for this entrepreneurial spirit. It wasn’t long before he and Gregg started a dorm-loft building business.  Gregg, a civil engineering student, designed the lofts and Rishi would sell them. Unfortunately, Rishi soon realized that this enterprise would keep him active only for one week in September. He knew he wanted a business that he could pursue the other 51 weeks of the year.

He and Gregg considered some other products they could sell on campus to their fellow students. In their sophomore year, they decided to start a t-shirt business—after all, everyone wore t-shirts and they had a little experience making t-shirts in high school. They named the company that they ran from their dorm room, A-1 Screenprinting, so their company would be first in the phone book.

When his Ford Probe GT broke down on US-23, Narayan came across a way they could expand their enterprise. The tow truck driver who picked up his car had a basic screen-printing setup he wanted to sell. Narayan and Gregg took him up on the offer and, later, when they needed more room to produce shirts, that same driver invited them to work in his garage.

And, as it turned out, Rishi wasn’t getting any training in the ChE curriculum to help him run his enterprise. Not many faculty, let alone students, started businesses in those days.  Narayan says of their early days, “I don’t remember if we made money but we learned a lot during those years about cash flows and receivables, production, and marketing and sales.”  He says they learned how to run a small business as their company grew, with both their successes and failures.

This is what you do when you start a business. You make some quick assumptions and you roll with it. Now he describes this process as, “focusing on a fast B, versus the slow A."  You either succeed, or fail quickly, learn, and move on.Rishi Narayan
Tweet

When he looks back at his time as a chemical engineering student, he admits most ChE classes didn’t hold his attention.  ChE 486, Chemical Process Simulation and Design I, however, was a course that he looks back upon fondly and credits with developing entrepreneurial skills he would use in the future.

His group’s project in this class was to design a non-alcoholic brewery. The students learned how to do quick calculations using their estimates and assumptions as they were making decisions, or “back of an envelope” calculations as their textbook called them. “This is what you do when you start a business.” Narayan says.  You make some quick assumptions and you roll with it.” Now he describes this process as, “focusing on a fast B, versus the slow A.  You either succeed, or fail quickly, learn, and move on.”

This course was taught by Johannes Schwank.  Narayan says Professor Schwank appreciated what he was doing with his startup and encouraged him to continue his work.  He also valued the support he received from his undergraduate advisor, Dr. Susan Montgomery.

He still uses his math and problem solving skills today but he particularly appreciates the technical communications component of his undergraduate degree and the emphasis made on creating quality presentations. Every project came with a presentation. “You didn’t just turn in a report,” he notes. “You had to present your findings to the class and those PowerPoint slides had to look good!”

Narayan decided to go on for a master’s degree in chemical engineering, although all of his electives were IOE courses, where he was introduced to Six Sigma and Lean Manufacturing.

As he finished graduate school, he knew he had to make decisions about his career. “For most of my undergraduate career, the business was a ‘side hustle’, just something I did while I was working towards graduation,” Narayan remembers.  “It could fail and I would just move to something else. But eventually I realized it was time to give it a real shot and see what we could make out of it. ”

When they decided to stay with the business, they also started developing the idea of opening a retail storefront in order to reach their customers. While their competitors were moving exclusively online, UGP opened their first store on South University in early 2008. Eventually, they were able to take advantage of the downturn in the economy during the late 2000s to expand into vacant storefronts on several campuses. They continued this growth strategy and expanded throughout the Big Ten, and began opening store locations with bigger footprints that not only provided custom printing, but also began offering printed collegiate merchandise for a more traditional shopping experience.

Currently, they are exploring new concepts for their expansion, returning to their roots by opening up small offices in bigger cities. Narayan says, “Custom printing is our bread and butter and all we really need is a desk, samples, and a knowledgeable salesperson to help customers.” And that first location on South U? It’s now an ATM Vestibule!

With Underground Printing’s success, Narayan has been able to pursue a number of other interests. Last year, he joined the U-M’s Center for Entrepreneurship as a lecturer, where he teaches an e-commerce entrepreneurship class in both the fall and winter semesters.

In addition to serving on the boards of the Ann Arbor Downtown Development Authority and the A2 Summer Festival, he has been able to invest in and start other businesses.  He is a principal in Chibor Angels, a company that supports startups in Ann Arbor and Chicago (http://www.chibor.co/).

In 2014, he helped found AFC Ann Arbor,  a 4th tier semi-pro soccer team. Members of the National Premier Soccer League (NPSL), AFC Ann Arbor played their home matches last season at Skyline High School in front of a crowd of 1,000 fans on average.  While the Mighty Oak are quite successful, reaching the Midwest Final the last two years, Narayan says this venture is more of an investment in the community rather than business, as Washtenaw County residents and local business have rallied around the team.

While Rishi, may not have ended up in the world of chemical engineering, he has great appreciation for the ChE department, the faculty and staff, and everything he learned there. So much so that he has created the Underground Printing Scholarship, which will be awarded to chemical engineering undergraduate students starting in 2019.