by James Lynch
Michigan Engineering
August 7, 2018
A key component of Justin Kasper’s sensory equipment, Parker’s Faraday cup, had to be shown capable of withstanding the heat and light of the journey to the sun. To test it, researchers had to create something new – a homemade sun simulator. | Medium Read
For the idea of a solar probe to become reality, NASA needed proof that the spaceship's most important pieces could withstand the heat and radiation of the Sun. Justin Kasper, a Climate and Space Sciences and Engineering professor at the University of Michigan, is the principal investigator for one of those instruments, the faraday cup.

Part 2 of 7. This is a seven-part series anticipating the launch of the first mission to the sun, NASA’s Parker Solar Probe. The University of Michigan’s Justin Kasper, a climate space science professor, serves as one of the principal investigators for the mission.

Related Links
Part 1: Why we need an early-warning system for solar ejections
Part 3: Parker's record-breaking ride
Part 4: Using the gravity of Venus to reach the sun
Part 5: Sunblock and instrumentation
Part 6: The big send-off
Part 7: The end of the mission

There are reasons we’ve never sent a spacecraft as close to the sun as the Parker Solar Probe will get in the coming years. Chief among them is this – you don’t spend $1.5 billion to send something across the galaxy just to burn up before it can tell you anything useful.

The probe is expected to gather data from the sun’s corona that will help establish an early-warning system for solar weather. Proving the sensors, solar panels and other key equipment onboard will survive the heat and light of the trip has been the key hurdle ahead of this week’s launch.

Getting to this point required a little bit of networking and a lot of ingenuity, said Justin Kasper, University of Michigan associate professor of climate and space sciences and engineering and a principal investigator for the Parker mission.

Years ago, long before the Parker mission was approved, Kasper remembers telling colleagues that he thought the idea for the mission would work. His comment led to a connection that demonstrated just how long other scientists had been counting on it. 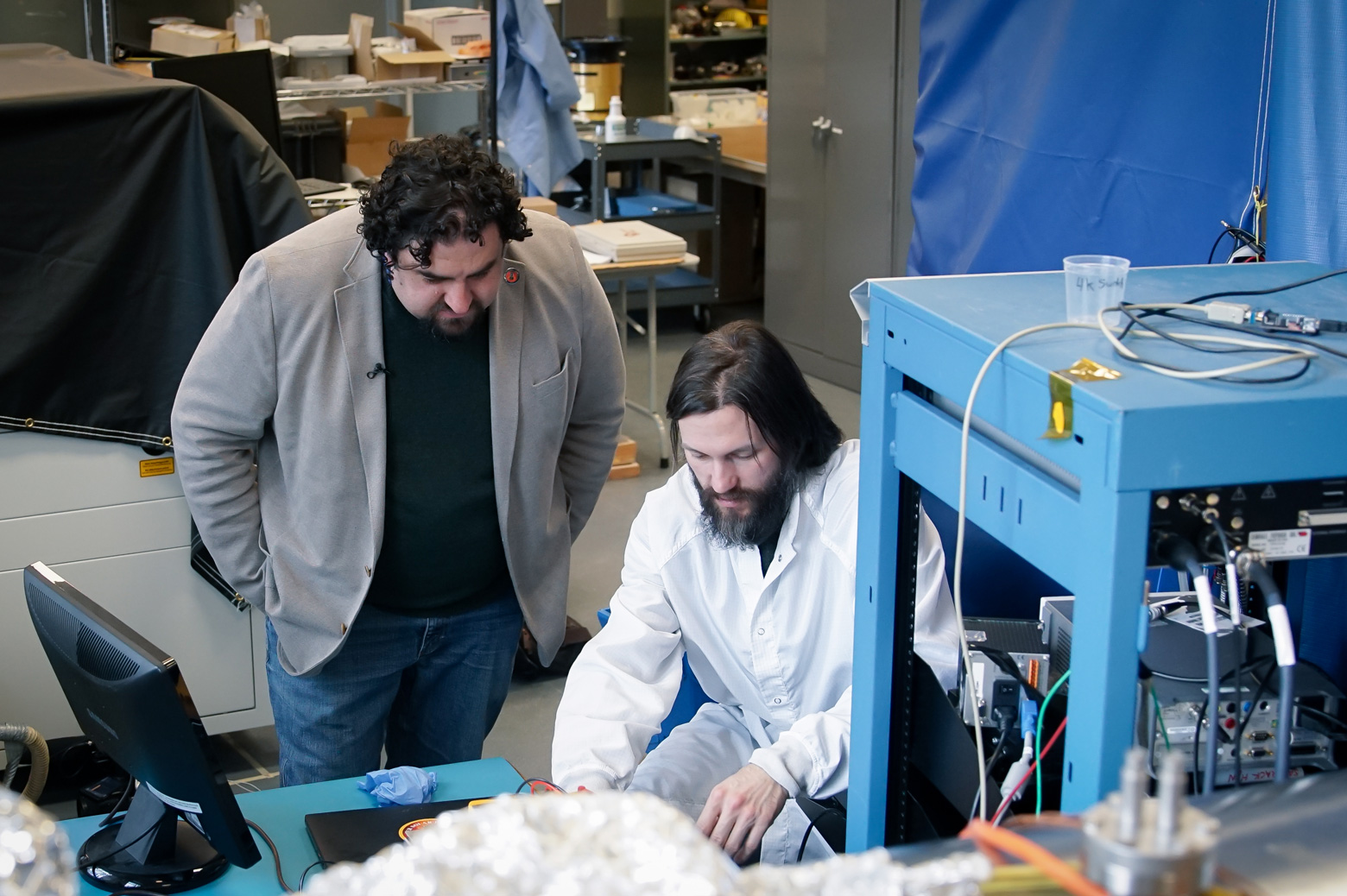 IMAGE:  Justin Kasper, University of Michigan associate professor of climate and space sciences, is principal investigator for Parker’s SWEAP investigation - charged with measuring the solar wind. The cup is tested in a vacuum chamber and hit with light from four modified IMAX projectors and particles from an ion gun - all to ensure it will operate in the sun’s atmosphere. Photo: Levi Hutmacher/Michigan Engineering, Communications & Marketing

In response to his remarks, and with few details provided, scientist Milan Maksimovic invited Kasper to meet him at a small town in the France’s southern region called Perpignan. Months later, when Kasper was in Rome for a meeting, he caught a short flight to meet his colleague in the French city – touching down in shorts and sandals that fit the day’s beautiful weather. After a brief greeting, the pair headed off in a car – destination still unknown to Kasper.

“Three hours later, we’re up in the Pyrenees mountains,” Kasper said. “I get out of the car, there’s a half-foot of snow. I’m in shorts – just miserable.

“But we’re looking at the largest solar furnace in the world.”

The Odeillo solar furnace is a massive 177-foot by 157-foot collection of mirrors designed to follow the sun’s movements and constantly reflect its rays. Atop the curved wall of mirrors are two water-cooled doors opening on a vacuum chamber that houses a particle accelerator.

It’s all designed to study how materials respond to extreme heat.

“And so my colleague and the people that work there told me, ‘Come with a prototype of your instrument, stick it in this camber and we’ll expose it up to the full amount of sunlight it would experience at closest approach,’” Kasper recalled. “‘We can simultaneously hit it with the same level of radiation it will experience from the solar atmosphere…’”

Such offers don’t come along every day, even for those who research solar weather. So it all left Kasper baffled.

In response to his head-scratching, Kasper’s new best friends shared a memorandum that was signed in the 1970s by members of France’s National Center for Space Studies. In it, officials had long ago pledged their assistance in the pursuit of making a solar probe a reality.

Their end of the bargain was to provide the testing environment to prove materials could withstand the sun’s heat.

A key component of Kasper’s sensory equipment, Parker’s Faraday cup, had to be shown capable of withstanding the heat and light of the journey to the sun. The cup is designed to scoop up the solar wind – measuring the electrons, protons and helium ions it contains, as well as their velocity, density and temperatures.

To test it, researchers had to create something new – a homemade sun simulator.

Their creation took shape in a first-floor lab at the Smithsonian Astrophysical Observatory in Cambridge, Mass. It had the look of a makeshift operating room, with a metal frame holding up thick blue tarps around three sides to create a 16 foot by x 8 foot workspace.

Inside the area, recreating the sun’s heat and light fell to a quartet of modified older model IMAX projectors that Kasper’s team purchased on eBay for a few thousand dollars apiece. These are not the digital machines you find in today’s Cineplexes, but an earlier generation that utilized bulbs.

“It turns out a movie theater bulb on an IMAX projector runs at about the same 5,700 degrees Kelvin – the same effective temperature as the surface of the sun,” Kasper said. “And it gives off nearly the same spectrum of light as the surface.”

Space offers essentially no atmosphere, meaning a proper testing environment for the Faraday cup would have as little air as possible. So researchers placed the cup in a metal vacuum chamber for testing.

Resembling an iron lung, the seven-foot-long silver chamber has a hatch at one end that swings outward with a small round window in it. The night before testing in late-April, the team began pumping atmosphere out of the vacuum chamber.

By the time the simulation cranked up for the simulation, the chamber registered roughly one-billionth of the Earth’s atmosphere.

All four of the IMAX projectors sat atop wheeled tables, and for the test, researchers rolled them into place, with their beams pointed through the vacuum tube window directly at the Faraday cup.

A final feature of the simulator was its ability to generate the kind of particles the Faraday cup will need to sense and evaluate. To do that, the team attached an ion gun to the vacuum tube hatch, with the “barrel” of the device reaching inside and pointed at the cup.

“The ion gun takes a pellet of metal and heats it up,” said Anthony Case, an astrophysicist at the Harvard Smithsonian Institute for Astrophysics. “When it gets hot, ions start boiling off this piece of metal. Then you hook it up to a battery, accelerating the ions out of the gun. And we can direct them right toward the Faraday cup’s aperture where they’ll be measured.”

On test day, the Faraday cup took the heat and delivered—putting Parker Solar Probe on track for its summer launch.

Kelly Korreck, a U-M alumna and astrophysicist at the institute, serves as head of science  operations on Parker’s Solar Wind Electrons Alphas and Protons Investigation (SWEAP), as well as SWEAP activities for the Smithsonian.

“As for the test today, it confirmed what I had suspected—when you take an amazing team of scientists and engineers, give them a complex, difficult, interesting project and the motivation of exploring a region of the universe humankind has never been before, remarkable things happen,” she said following the test.