Researchers are reverse engineering the signal from the same GPS satellites that provide location capabilities to our phones and cars in order to more accurately determine wind speeds within roaring hurricanes.

Tianlin Wang, a University of Michigan graduate student in electrical and computer engineering and member of the Radiation Laboratory, won the IEEE Mikio Takagi Student Prize at the 2018 IEEE International Geoscience and Remote Sensing Symposium (IGARSS) for his paper titled “Characterization of the Transmit Power and Antenna Pattern of the GPS Constellation for the CYGNSS Mission”, co-authored by Christopher Ruf, Bruce Block and Darren McKague. 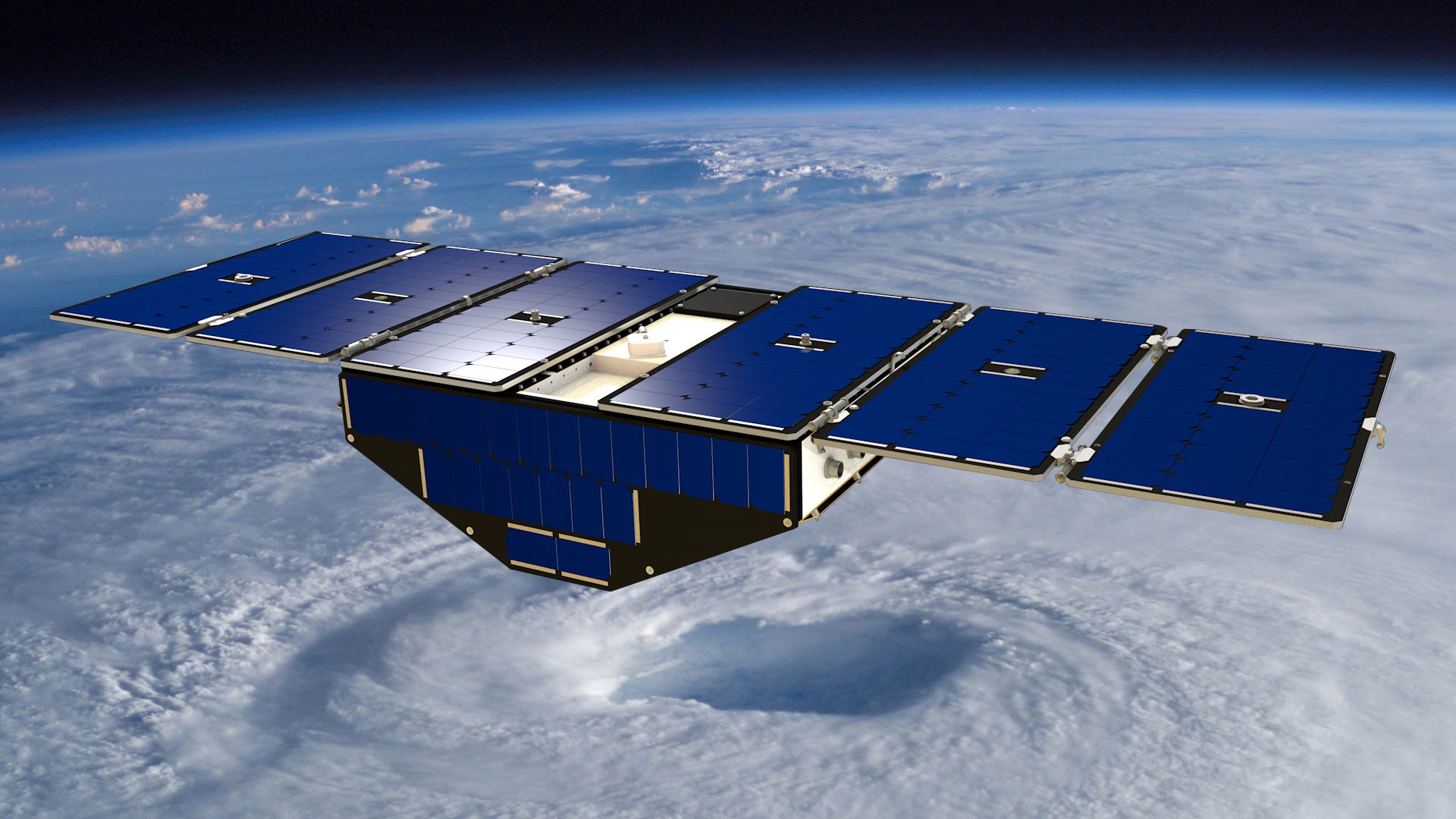 In 2016, eight CYGNSS satellites, each about the size of a large duffel bag, were launched into orbit to measure wind speeds and the roughness of the ocean. The satellites utilize the signals sent from the constellation of 32 GPS satellites.

Typical radar is stymied from measuring weather inside of hurricanes due to depending on microwave signals with wavelengths about the size of rain. CYGNSS can see through the rain with much longer wavelengths provided by the GPS satellites. The GPS signals cut through the storms to reflect off the earth and oceans, and carry the weather data back to the CYGNSS satellites.

In 2017, the CYGNSS constellation gathered wind speed measurements from Hurricanes Harvey, Irma, Jose, Maria and Rita. After comparing this data to actual wind speeds recorded by storm-chasing aircraft and computer models, the researchers found a need to better calibrate their instruments after measuring uncertainty of 17% for storm winds.

While consumer GPS devices only need to receive above a certain power from GPS satellites to work correctly, CYGNSS requires knowledge of the exact power of the signal incident on the ocean surface in order to use it for precise weather measurements.

“With deeper understanding of this problem, we discovered more and more variabilities in estimating this power, also named as the effective isotropic radiated power (EIRP). The first-order error source is the transmit power of the satellites, and the second-order error comes from the transmit antenna gain. The GPS satellites were kind of mysteries to us.” Wang said.

To calibrate for these changes in signal power, the team developed and built a land-based GPS constellation power monitor (GCPM) system, which sits on top of the Climate & Space Research Building. With the GCPM, the team was able to measure very repeatable GPS received power signals each day, which were also validated using independent measurements by the German Aerospace Center (DLR). 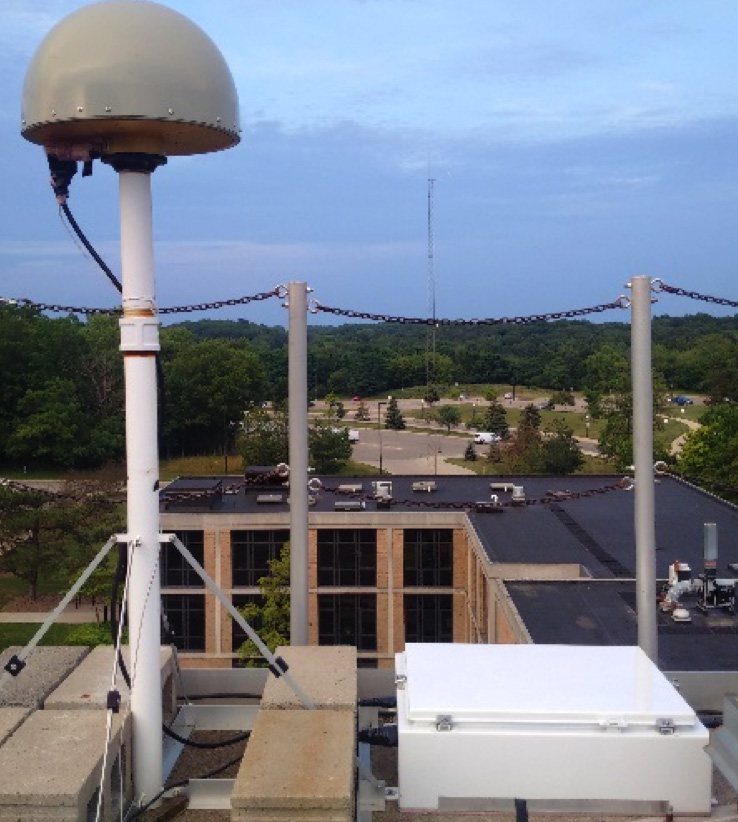 With the GCPM system, the transmit power of the GPS constellation can be estimated and used in the CYGNSS science data processing algorithm. With this extra data, estimates of ocean surface wind speed have significantly improved.

To address the second issue of antenna patterns, Wang and the CYGNSS calibration team needed to perform more characterization, and determine the GPS satellite antenna patterns beyond what has been published.

“Previously, we assumed the antenna gain patterns were azimuthally symmetric,” Wang said. “However, there is an asymmetry with as much as decibel level difference, which is very large in CYGNSS’s calibration error budget. Possibly, this is a problem that could only be solved by the on-orbit measurements using antennas mounted on top of the CYGNSS satellites.”

When the full antenna pattern is applied to the CYGNSS calibration algorithm, the team expects to retrieve much more accurate wind speed data, with a better match to the observations by planes flown through the hurricanes and the global-scale wind speed observed by other remote sensing satellites and estimated by weather prediction models. 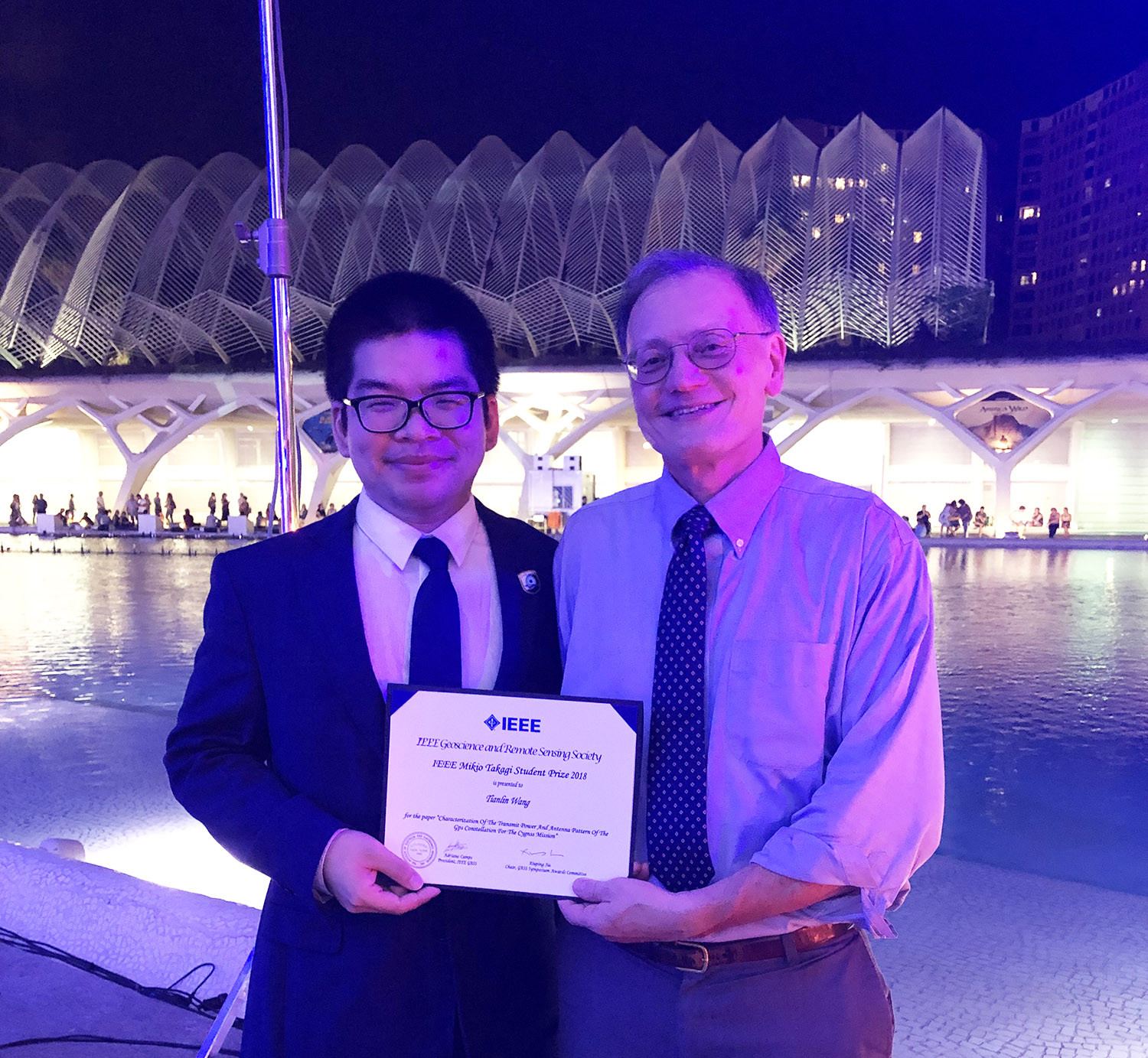 The team is already testing CYGNSS to observe soil moisture and flooding, as the same GPS signal that can see through rainy storms can cut through leafy vegetation.

“This work cannot be done by myself,” Wang said.

“I’d like to acknowledge my advisor Chris, co-authors Bruce and Darren, as well as many other people, including Scott Gleason from the University Corporation For Atmospheric Research, Andrew O’Brien from Ohio State University, Steffen Thoelert from DLR, and the many engineers from Space Physics Research laboratory, U-M and the ElectroScience Laboratory at Ohio State. I also want to thank the many faculty members from the Radiation Laboratory, Electrical Engineering and Computer Science, and Climate and Space Sciences and Engineering for their courses that prepared me for my research.”

The award celebrates those who have gone above and beyond to service and support social justice, diversity, equity, and inclusion efforts. | Short Read
Researchers
In the News
NASAJul 27, 2018
Flood detection is a surprising capability of microsatellites mission
Science NewsSep 22, 2017
Intense storms provide the first test of powerful new hurricane forecast tools
The New York TimesDec 9, 2016
Eight small satellites could have a big impact on hurricane forecasts
In the NewsDec 8, 2016
NASA microsatellite mission could breathe new life into hurricane prediction
YahooNov 10, 2016
NASA set to launch new fleet of hurricane-tracking small satellites