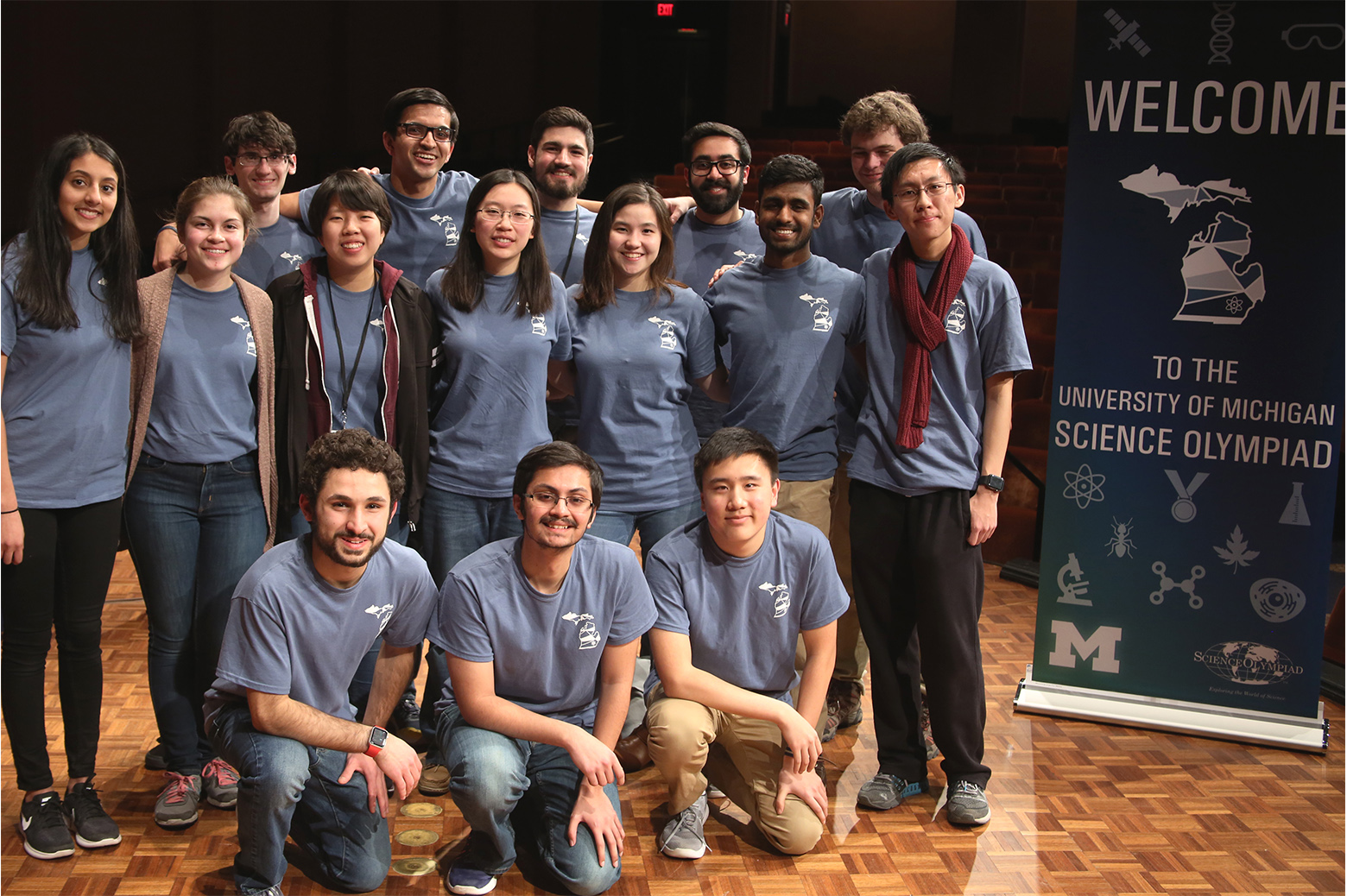 IMAGE:  The U-M Science Olympiad organizing team. The organization's board of directors are in the front row, left to right Omar Al-Ejel, Ranganath Kathawate, and Kevin Huang.

Science Olympiad is a national organization that gives the next generation of well-rounded scientists and engineers a chance to problem solve and design their way to the top. This year, the University of Michigan offered the state’s first invitational competition run by Olympiad alumni. Conceived of and organized in part by CS freshman Omar Al-Ejel, the inaugural U-M Science Olympiad gave 45 high school student teams a place to hone their craft and prep for the core competition.

Science Olympiad competitions are like academic track meets, consisting of a series of 23 team events. The specific events change each year, but always cover a wide range of disciplines including genetics, earth science, chemistry, anatomy, physics, geology, mechanical engineering, and technology. Teams typically have their first event each year in the regional circuit, with the goal of climbing to the state- and national-level competitions.

The U-M invitational offered a chance for the teams to compete without the pressure of advancing to the next round looming over them.

“The invitationals are really for experience, and they typically bring together really good teams that are very motivated,” says Al-Ejel. “They’re teams that will dedicate more time outside of the standard regional-state-national competitions.” 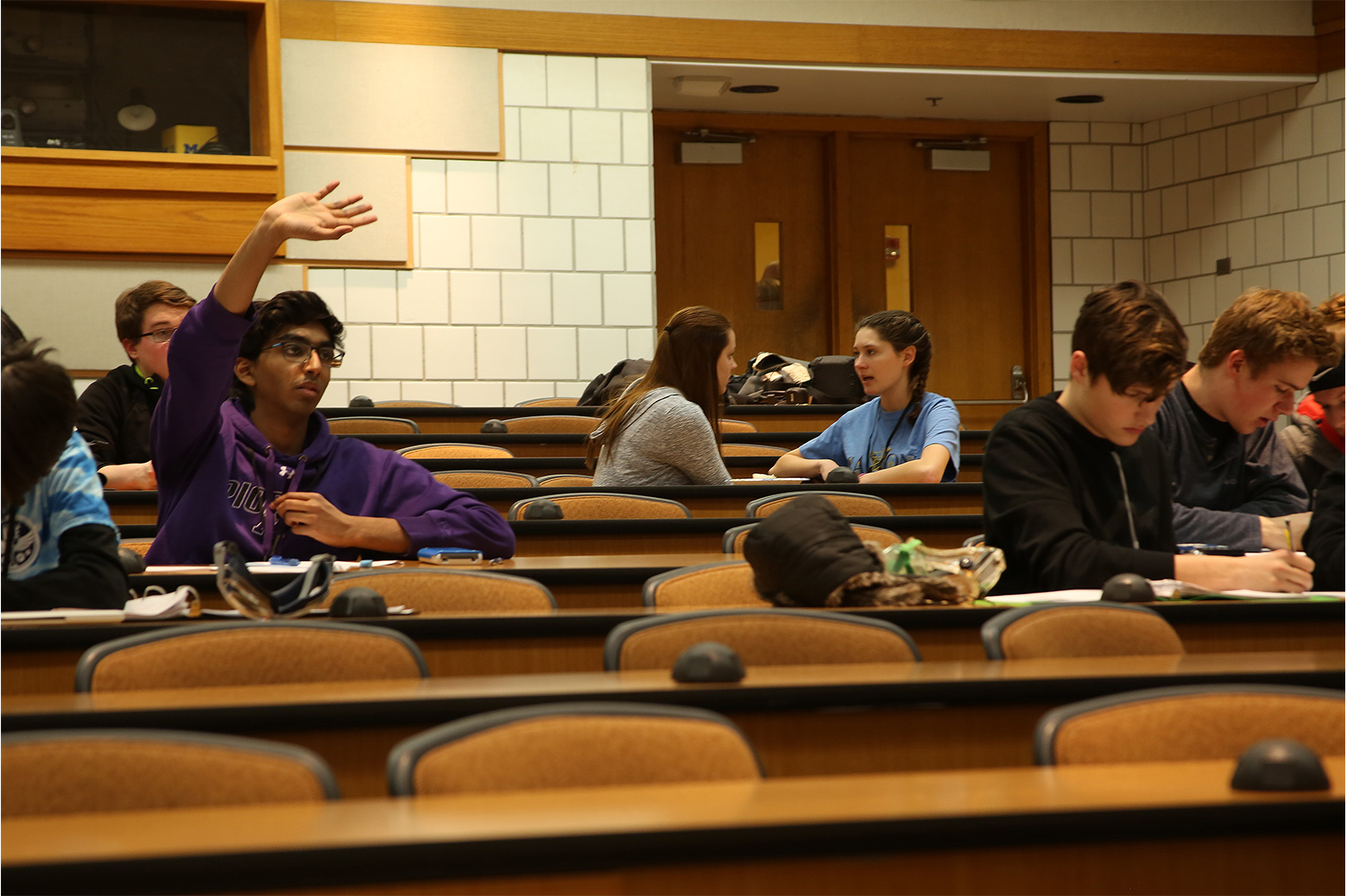 In its first year, the U-M event attracted 45 teams from across the state, and even some from Ohio and Indiana. With teams of up to 15 students each, that means over 600 high schoolers attended the very first event. The organization helped with the costs of travel and lodging for one team traveling from the Upper Peninsula, giving them their first chance at a high-profile competition.

“Many of the students had never been to Ann Arbor in their life,” says Al-Ejel, “They’ve never competed with teams that are well known in Michigan because they’re just so far away.”

The whole tournament took place over one day, February 17, 2018, but the organizers’ work started well before. The group juggled over 50 room reservations, set up materials and written tests for the events based on Olympiad guidelines, and recruited volunteers to keep the day running smoothly.

Equipment was provided for teams to do coding exercises in Python, to use remote sensing data to observe climate change processes, and to build elaborate gadgets like mousetrap vehicles, a precarious wooden tower designed to carry heavy weights, a self-propelled hovercraft, and rubber-powered helicopters.

“Some of the competitions sound simple on paper,” says Al-Ejel, “but it’s the quality of craft the students put into these things that makes Science Olympiad so intense and creative.” 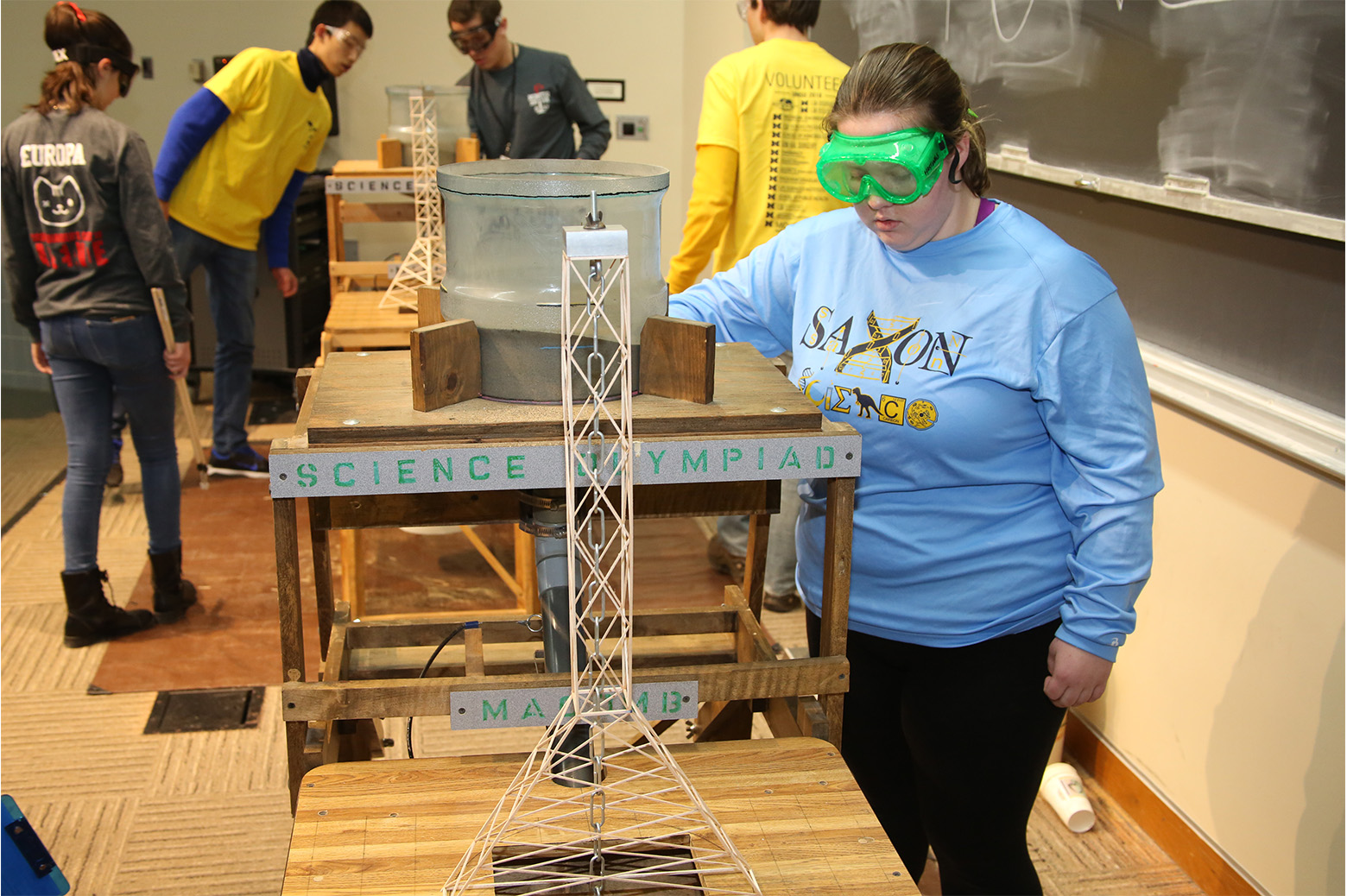 IMAGE:  The challenges, prepared by students organizing the event, included the design and construction of many elaborate devices. This team built a wooden tower, judged on its weight and capacity to bear a load of sand.

“Every student handles about three events with partners for their school, and you go in-depth on those topics,” he says. “You learn the science behind them and the practical engineering that goes into these devices.”

U-M’s invitational is the first of its kind in the state of Michigan, but the idea of an alumni-led tournament has grown in popularity elsewhere; institutions including MIT, Yale, Cornell, and the University of Pennsylvania have their own versions that draw students from near and far. Events run by Olympiad alums tend to offer a more energetic atmosphere than usual, says Al-Ejel.

“They’re students we had just been competing with; we’re trying to give back to our past selves in a way.”

His enthusiasm showed right from the outset: Al-Ejel began planning this event before he even started his first semester at Michigan. With fellow directors Kevin Huang (Undeclared) and Ranganath Kathawate (Cellular and Molecular Biology), the sponsored student organization built a team of 15 core organizers and gathered over $15,000 in funding to support the project. In just over one semester, the whole event was built from the ground up.

With a successful initial showing under their belt, the organizers are hoping to take on even more teams in future years, and open up financial support to students traveling big distances to take part. The first year showed that there’s room for a solid Olympiad tournament at Michigan – in time, it could be a national draw.