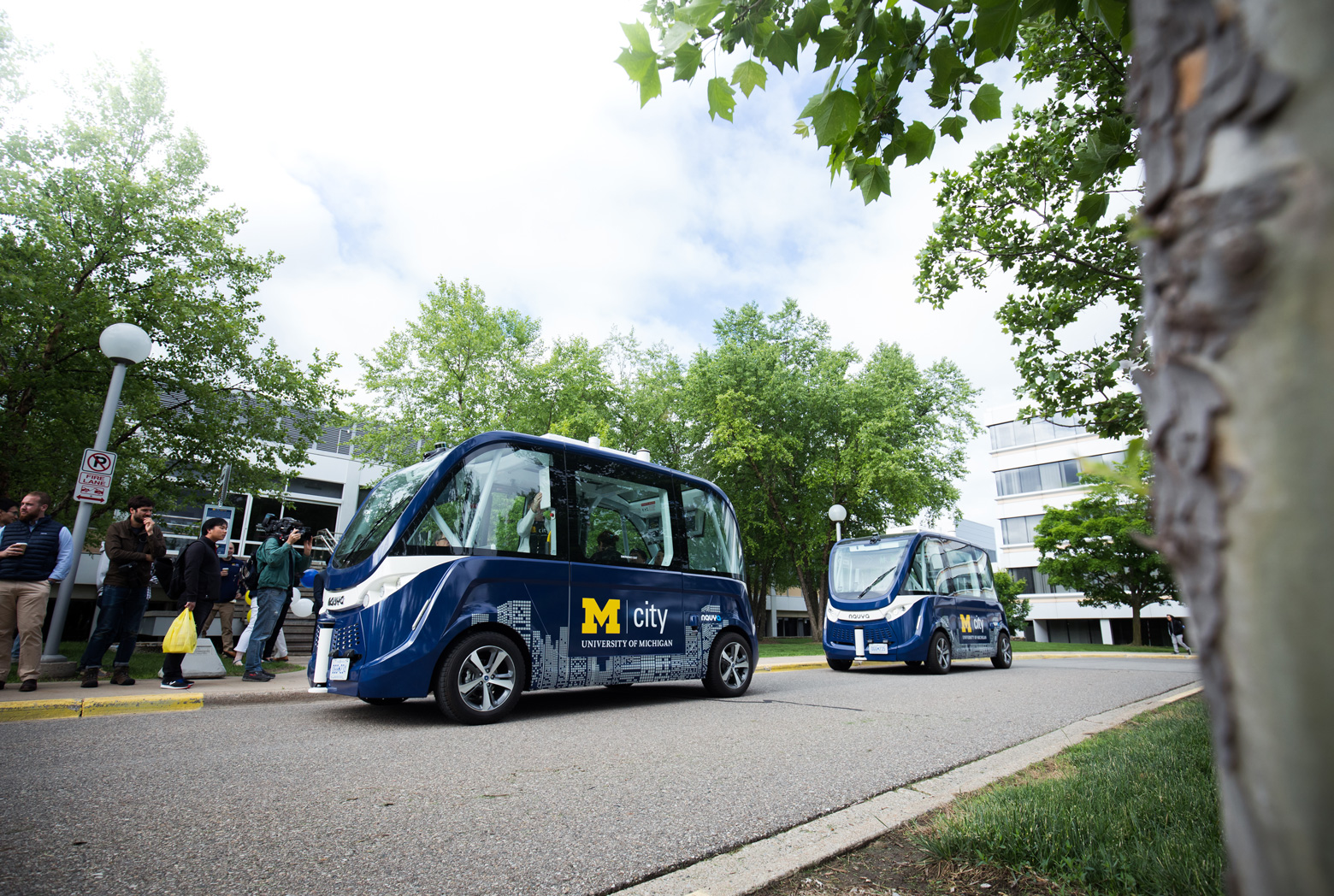 IMAGE:  The shuttle operates from 9 a.m. to 3 p.m. Monday through Friday and transports passengers from distant parking at the North Campus Research Complex. Photo by Levi Hutmacher.

The Mcity Driverless Shuttle, a research project at the University of Michigan, launched today on U-M’s North Campus.

In the project, Mcity is studying how passengers react to the driverless shuttles as a way to gauge consumer acceptance of the technology. The shuttles are equipped with on-board cameras and Wi-Fi communications to capture data generated during operation.

Mcity is a U-M-led public-private partnership to accelerate advanced mobility vehicles and technologies. It is operating the shuttle in partnership with U-M Logistics, Transportation and Parking.

“The Mcity Driverless Shuttle is the first driverless shuttle project in the United States focusing on user behavior research and data collection, and we’re excited to begin this important work,” said Mcity Director Huei Peng, who is also the Roger L. McCarthy Professor of Mechanical Engineering and the faculty lead on the shuttle research project. “The data we collect will help researchers understand user trust over time, as well as how to design safer vehicles and how to operate them more efficiently.” 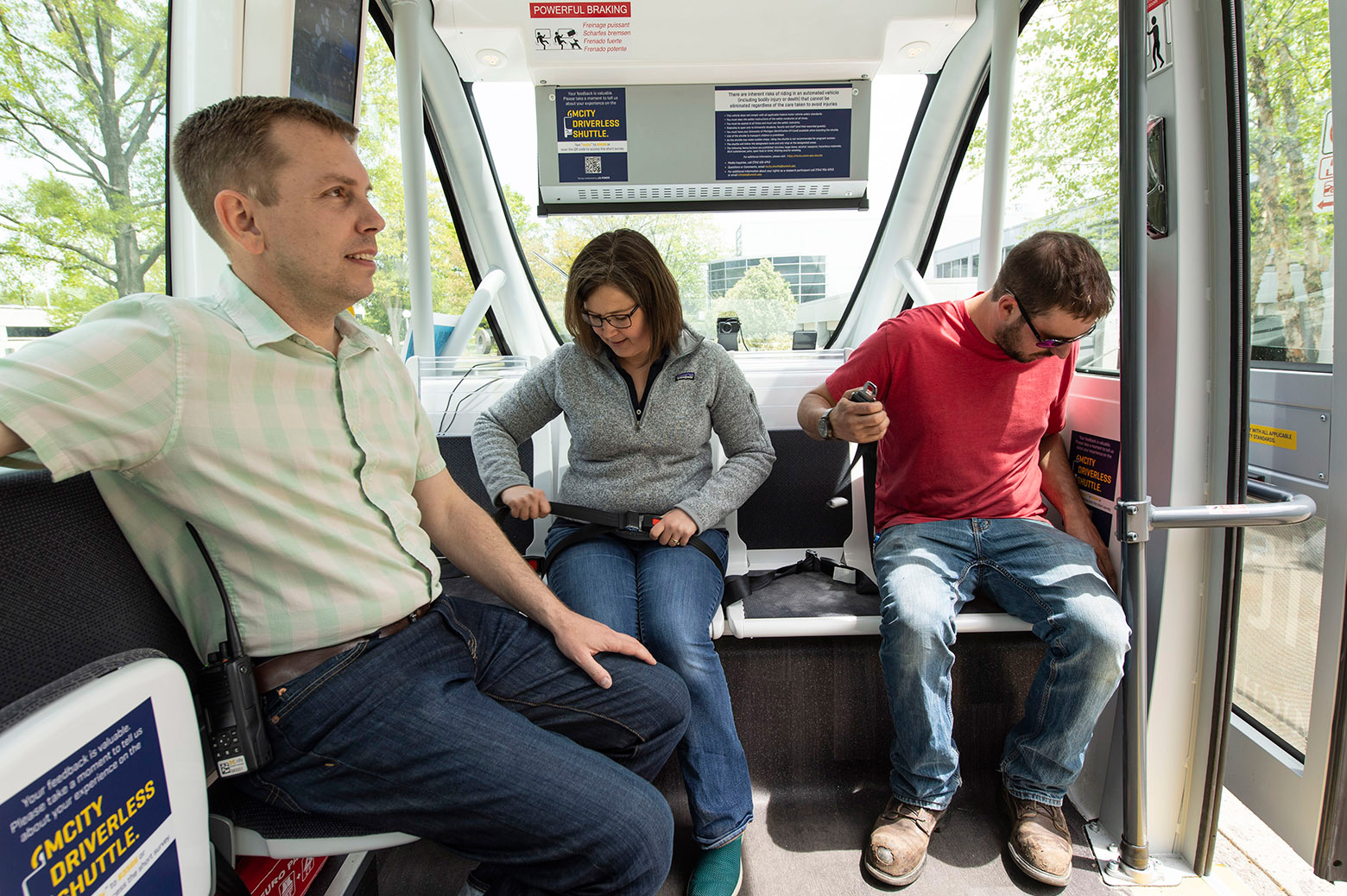 The shuttles are equipped with lidar, which uses invisible laser beams to build a view of the surrounding environment, and GPS for localization.

Interior cameras record the reactions of riders inside the shuttle. This includes the use of video and audio recordings, and photographs from the videos. Exterior cameras will capture the reaction and behavior of other road users, including other vehicles, bicyclists and pedestrians. Mcity will use Wi-Fi data, already gathered by the university, to learn about ridership and usage patterns, and is working with J.D. Power to survey users about their experience. Mcity’s data protection plan will safeguard riders’ privacy.

“The research obtained from our surveys will help the industry understand the rider’s experience on the driverless shuttle as well as non-riders who interact with the shuttle as it operates on U-M’s campus,” said Kristin Kolodge, executive director, driver interaction and human machine interface, for J.D. Power. “Examining the experience from both perspectives will help industry stakeholders better understand consumer acceptance of driverless technology over time.”

The research obtained from our surveys will help the industry understand the rider’s experience on the driverless shuttle as well as non-riders who interact with the shuttle as it operates on U-M’s campus.

While the shuttles will run autonomously, a conductor will be on board at all times, with the ability to immediately stop if necessary for safety reasons. Mcity’s team of safety conductors completed comprehensive training on the shuttle, both inside the Mcity Test Facility and on the route at NCRC. About 1,000 test runs were conducted inside the test facility. In total, approximately 500 hours of testing and training were completed, including 200 hours of training by the conductors.

The shuttle will run on U-M roads Monday-Friday, 9 am-3 pm, weather permitting. There will be no cost to riders, and the two shuttles will cover the route roughly every 10 minutes. Users can check the current location of the shuttles via DoubleMap.  Shuttle stops are outside the Building 10 entrance on the north side of NCRC, off Plymouth Road and Huron Parkway, and on the south side of the complex, in the  NC91 parking lot, just off Baxter Road.

“After over a year working in partnership with Mcity, NAVYA is pleased to join in announcing a new campus mobility research project  that will deploy two new NAVYA AUTONOM Shuttles to transport students, faculty, and staff,” said NAVYA CEO Christophe Sapet.

NAVYA is an affiliate member of Mcity. The first of NAVYA’s Autonom Shuttle vehicles to operate in North America is based at Mcity, where it is used to support research and to demonstrate automated vehicle technology. 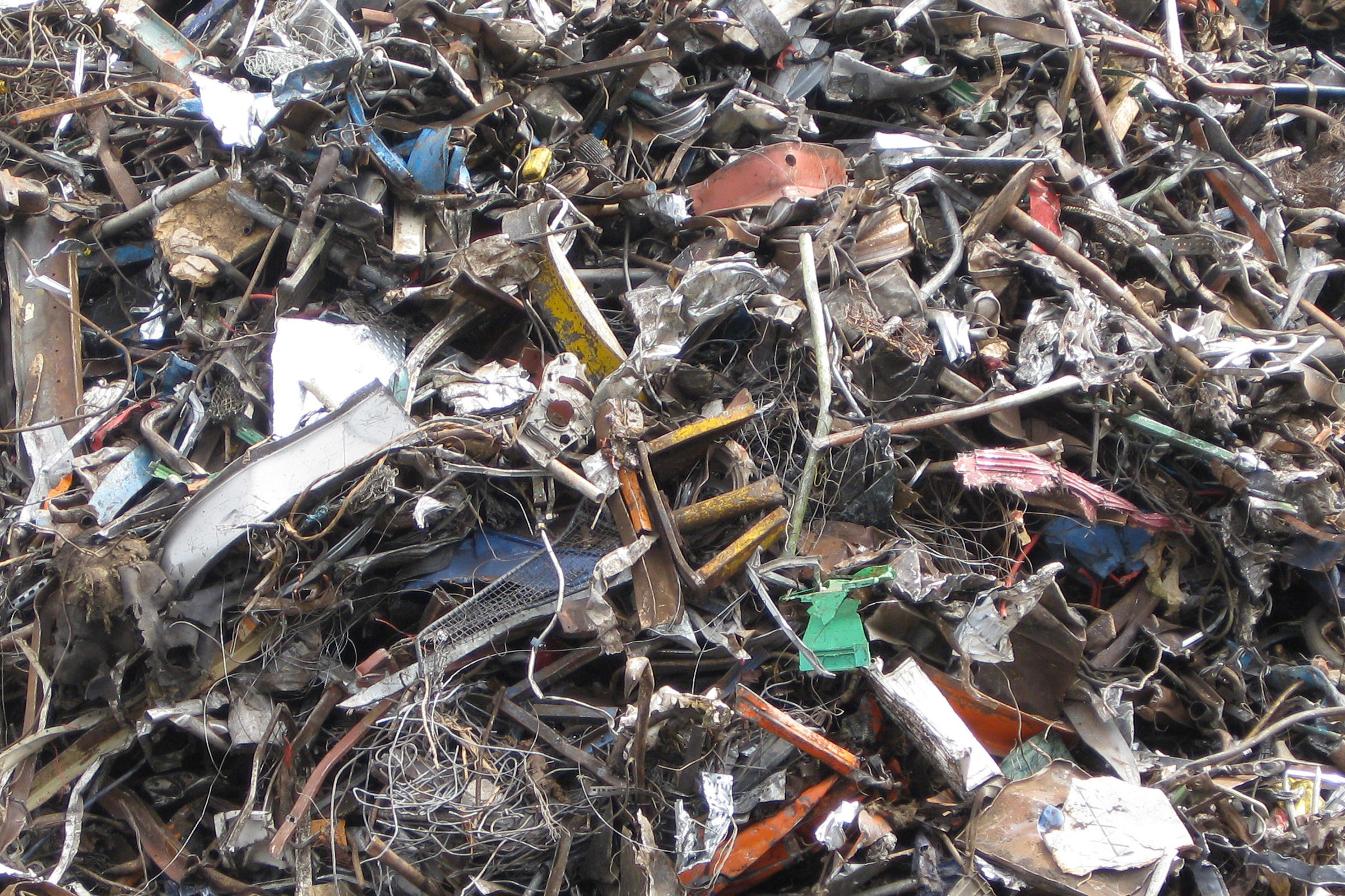 The global move to advanced materials and electric powertrains requires a re-evaluation of how we recycle vehicles.| Medium Read