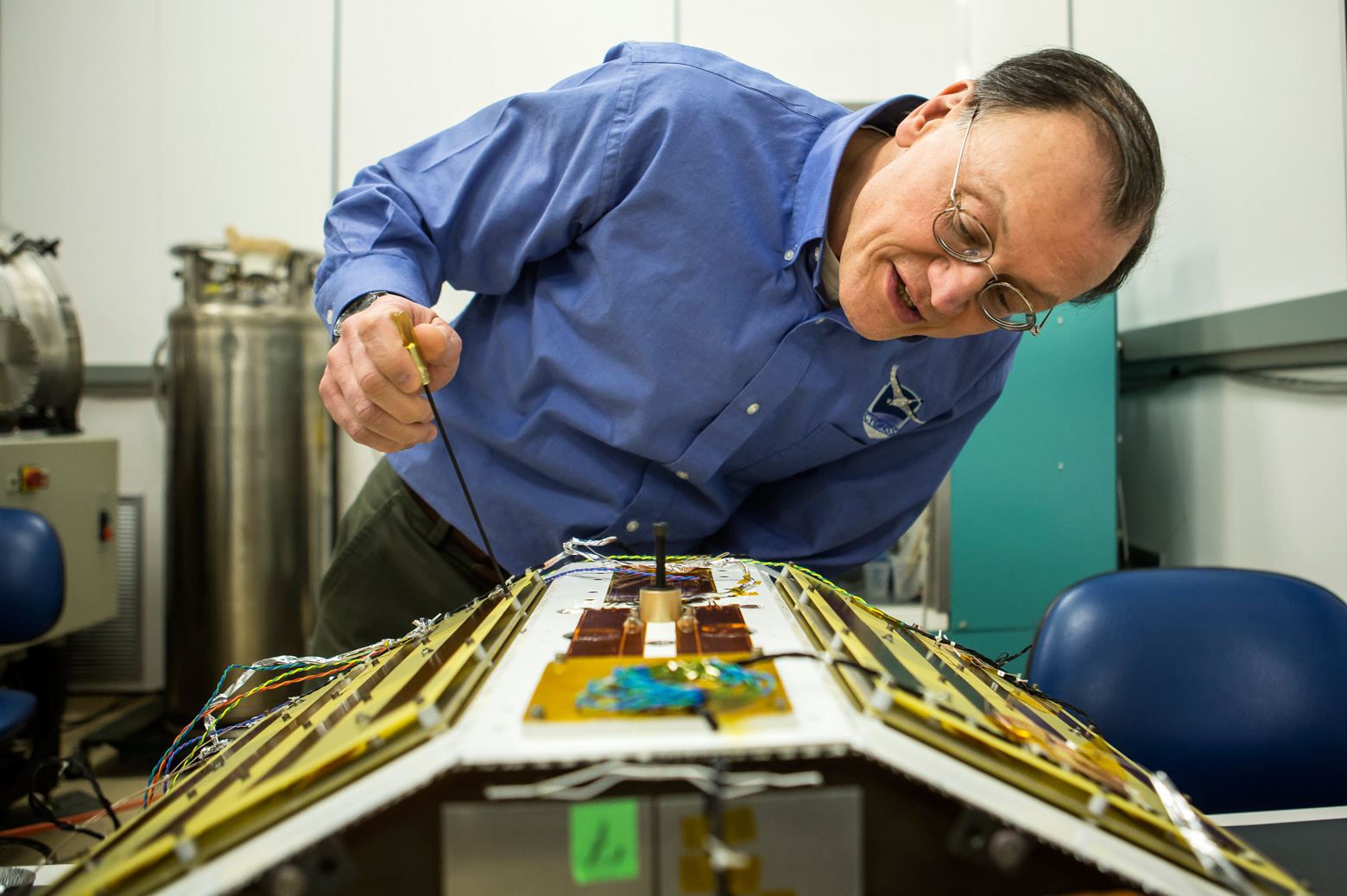 IMAGE:  Christopher Ruf, Director of the Space Physics Research Laboratory and professor of Climate and Space Sciences and Engineering, inspects a CYGNSS prototype in the Space Research Building in 2015. Credit: Joseph Xu

As we head into the 2018 Atlantic hurricane season, now is a good time to reflect on the accomplishments achieved by CYGNSS since its launch in December 2016. Early mission operations focused on engineering commissioning of the satellites and of the constellation as a whole. One achievement in particular is noteworthy. The satellites have no active means of propulsion, yet their relative spacing is important for achieving the required spatial and temporal sampling. The desired spacing is achieved by individually adjusting a spacecraft’s orientation and, as a result, the atmospheric drag it experiences. This technique is referred to as “differential drag”. An increase in drag will lower a satellite’s altitude, thereby changing its orbital velocity. We adjust the distance between spacecraft by adjusting their relative velocities. This is a new way of managing the spacing between a constellation of satellites, and one that can be significantly less risky and lower in cost than using traditional active propulsion. As a result, we were able to afford more satellites for the same price, which ultimately led to better, more frequent, sampling of short lived, extreme weather events like tropical cyclones.

Here is a figure, provided by CYGNSS team member Kyle Nave of ADS, illustrating the change in relative speed between two of the CYGNSS spacecraft that occurred the first time a differential drag maneuver was performed, on February 23, 2017. 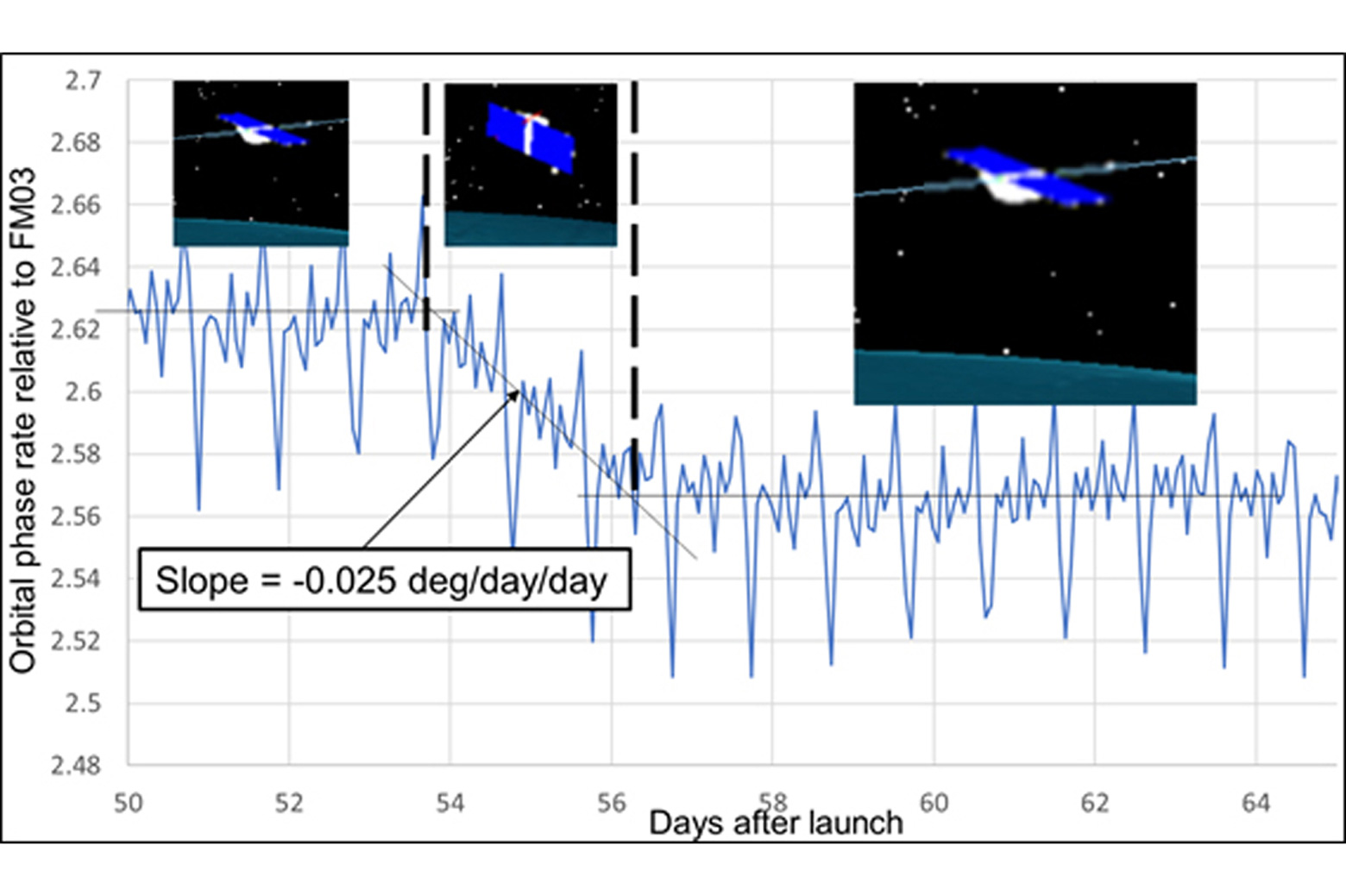 IMAGE:  Change in relative speed between two of the CYGNSS spacecraft that occurred the first time a differential drag maneuver was performed, on February 23, 2017. Credit: Kyle Nave

The orbital phase rate between the two spacecraft is shown before, during and after the higher of the two had its orientation changed to maximize atmospheric drag. Phase rate measures how quickly the angle between two satellites changes. By increasing the drag on the higher one, it lowers to an altitude and orbital velocity closer to the lower one, thus reducing the phase rate. This was an important first confirmation of our ability to perform the maneuver. Since then, there have been many more drag maneuvers. Five of the eight satellites are now properly positioned relative to one another at a common altitude, and the remaining three are expected to have their drag maneuvers completed later this year.

The primary science objective of the CYGNSS mission is measurement of near surface wind speed over the ocean in and near the inner core of tropical cyclones. In an earlier NASA blog, (15 Dec 2017), I reported on our measurements of Hurricane Maria made in September 2017. Since that time, we have been examining the quality of our measurements both within and away from major storms. Measurements at ocean wind speeds below 20 m/s (44 mph) were found to have an RMS uncertainty of 1.4 m/s (3 mph).  Measurements of storm force winds during the 2017 Atlantic hurricane season were found to have an uncertainty of 17% of the wind speed. The analysis that produced these results is reported in the paper Assessment of CYGNSS Wind Speed Retrieval Uncertainty, published in IEEE Journal of Selected Topics in Applied Earth Observations and Remote Sensing. (Ruf et al. (2018). DOI: 10.1109/JSTARS.2018.2825948.)

CYGNSS operates continuously, over both ocean and land, and the land data have been another focus of recent investigations. The quality of some of those measurements, in particular regarding its spatial resolution, has come as something of a pleasant surprise. Here is one example of CYGNSS land imagery, of the Amazon River basin in South America, provided by Dr. Clara Chew of UCAR. 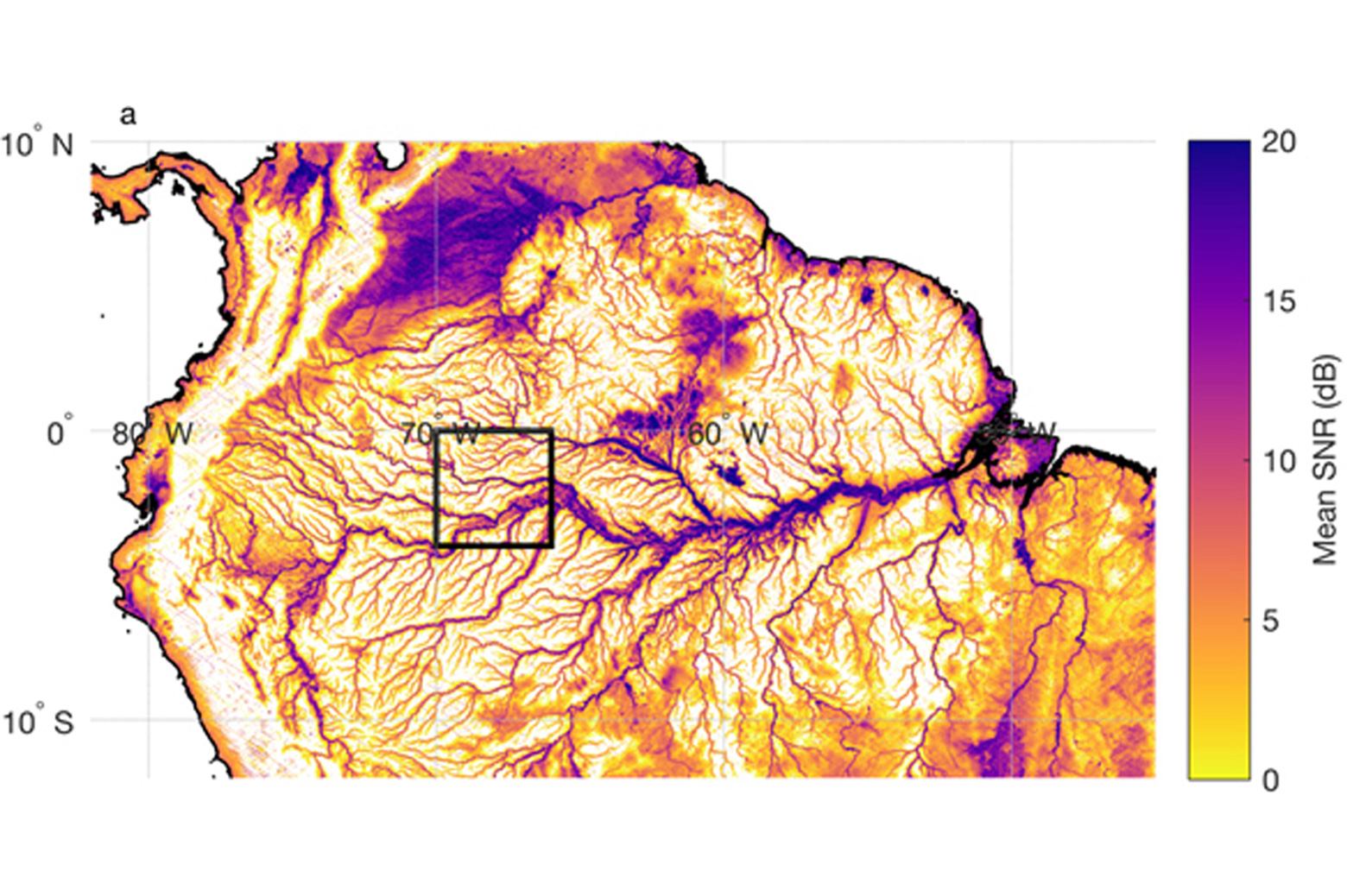 In the image, inland water bodies are prominently visible. This includes not only the major arms of the Amazon River but also its quite narrow minor tributaries. Careful examination of this and similar CYGNSS images suggests that the spatial resolution is markedly better here than it is over typical open ocean areas. The explanation lies in a transition of the electromagnetic scattering from an incoherent, rough surface regime over ocean to a largely coherent, near specular regime over inland waters. The fact that coherently scattered signals have inherently better spatial resolution is a well known phenomenon. What was unexpected is the widespread, global extent to which land surface conditions support coherent scattering. It requires the height of the surface roughness to be significantly below the wavelength of the radiowave signal, which in our case is 19 cm. This is apparently a ubiquitous property of wetland regions. It is a very fortuitous property for us, as it should enable an entirely new direction in scientific applications of CYGNSS measurements over land. NASA has recently added new investigators to the CYGNSS team specifically to study these new and exciting land applications.

A paper summarizing these and other CYGNSS achievements, as well as some of the future applications of its measurements, was published June 8, 2018 in Scientific Reports. It’s titled “A new paradigm in Earth environmental monitoring with the CYGNSS small satellite constellation.”

The mission has demonstrated that smaller, more cost-efficient satellites are able to make important contributions to the advancement of science. In the months and years ahead, CYGNSS will hopefully be able to demonstrate that those advances can lead to practical scientific applications, such as extreme weather monitoring and prediction, that will benefit humankind.