Of the many burning questions in the world of computing research, the one most dear to a student’s heart has typically been the least investigated: what happens after a PhD in computer science?

The researchers used the HITS link analysis algorithm in conjunction with R3, making this the first application of HITS to a study on career trajectories. Together, these tools helped them draw conclusions about both individuals and organizations in computing research. With R3, the researchers identified movement between industry, academia, and government work, tracked the growth of important organizations, and built predictive models for career transitions and employer retention.

The study reveals key organizations, from startups to universities to industry leaders, in computing research history. R3 captures factors beyond size and popularity that contribute to organizational “importance,” demonstrating that some organizations are important precisely for their small size, low retention, or short existences. The researchers were able to identify a variety of “hubs” and “authorities” over time, the former producing expertise that moved to other organizations and the latter attracting it. Some large companies with lots of researcher movement in and out qualified as both, such as IBM and Microsoft.

IMAGE:  Koutra and Safavi's career network model is able to identify organizations that produce and attract the most researchers over time, designating them "hubs" and "authorities," respectively.

The researchers examined post-PhD career transitions across sectors. Beyond finding evidence that cross-sector collaboration is increasing, R3 reveals that there’s truth to the narrative that it’s easier to break into industry from a different sector (especially academia) than vice versa. They also find that PhDs transitioning from industry appear to gravitate toward more “prestigious” institutions than their current industry employers, while those transitioning to industry often move into startups.

IMAGE:  The researchers collected a large new dataset for this study, covering the career movements of computing PhDs over the course of 45 years.

The researchers were able to predict career transitions by combining R3 network dynamics and individual career trajectory information. The study demonstrated that R3 could be of immediate use to recruiters hoping to retain PhDs in computing. It was also able to identify which organizations have been more successful in retaining talent, as well as how much “employee expertise” tends to move around between organizations. 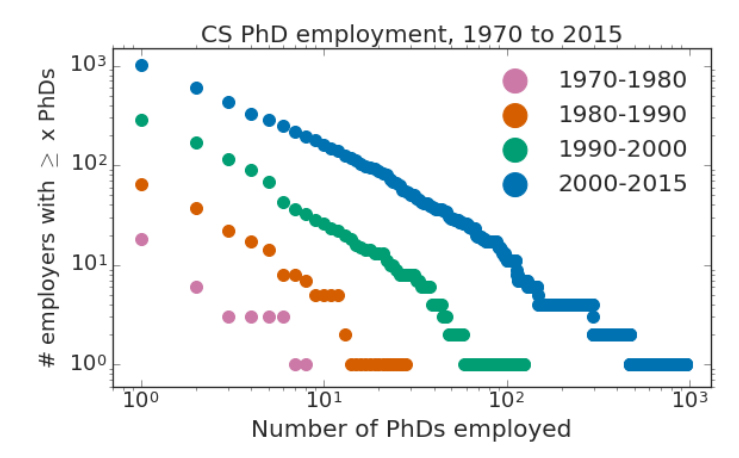 IMAGE:  Over time, the number of CS PhDs has not only increased but become more concentrated at a few larger employers.

“This work is a starting point for large-scale studies of computing career trajectories,” the researchers say in their findings. “Such analyses are becoming crucial as demand for computing expertise grows and our world increasingly depends on research innovations in computer science.”

This project opens up many opportunities to take the study deeper. Future investigations could tackle broader data, capturing the many important researchers with PhDs from other countries or without PhDs at all. Insights can also be gleaned by comparing different sub-groups in the field, like researchers from different continents or countries, those with or without a postdoc, and historically underrepresented groups in computing.

The paper, titled “Career Transitions and Trajectories: A Case Study in Computing,” will be published at KDD 2018.

The symposium highlighted new developments in computer architecture, and included a session on how the center's research can contribute to limiting the impact of pandemics.| Short Read
Researchers