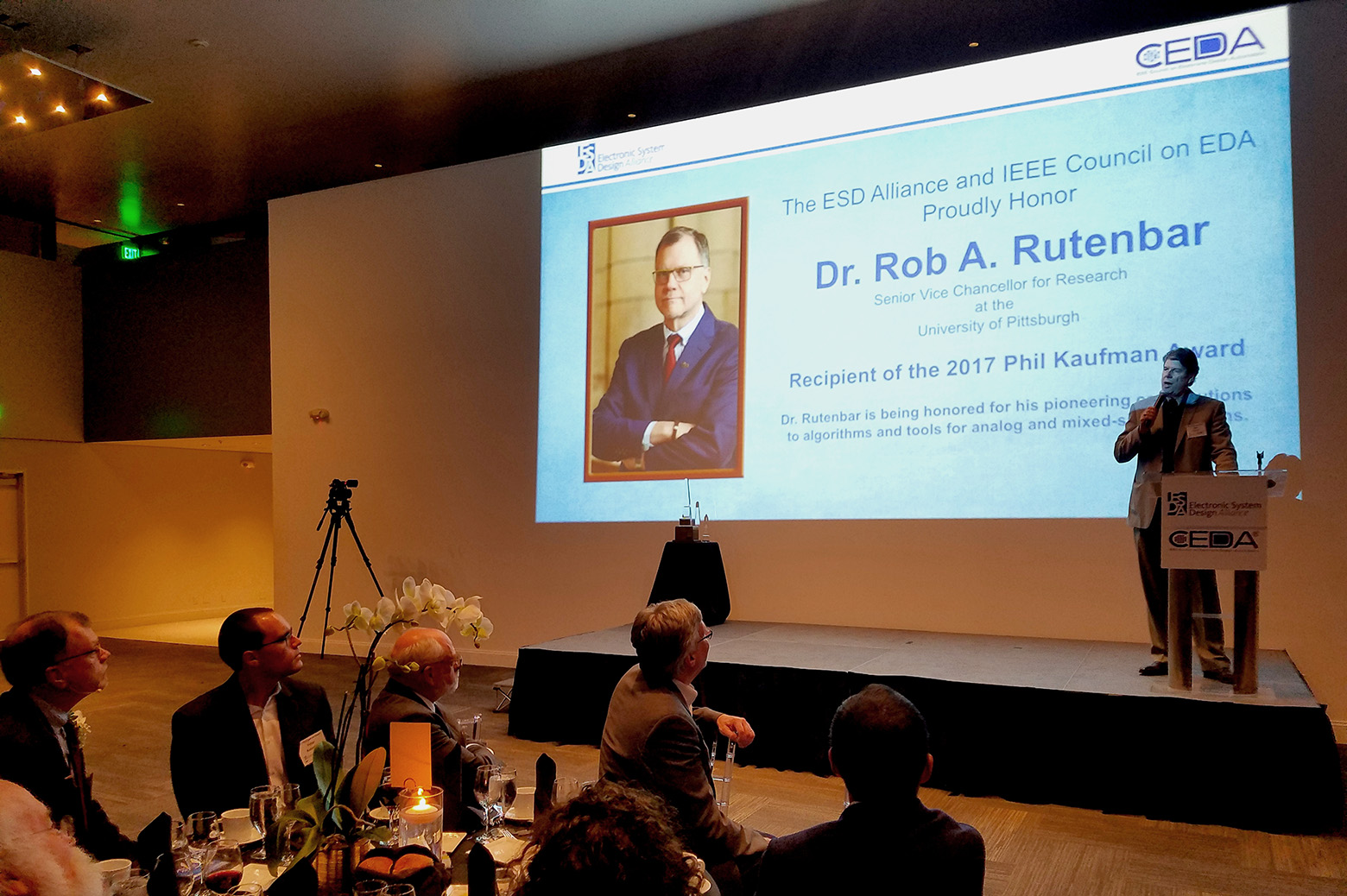 Dr. Rob A. Rutenbar (MSE, PhD CICE 1979, 1984), senior vice chancellor for Research at the University of Pittsburgh, was honored with the 2017 Phil Kaufman Award for Distinguished Contributions to Electronic System Design in a February 8th ceremony at the Glasshouse in San Jose, CA.

The award is presented yearly by the Electronic System Design Alliance (ESD Alliance) and the IEEE Council on Electronic Design Automation (CEDA) and is considered the “Nobel Prize” of electronic design automation.

Dr. Rob Rutenbar
Dr. Rutenbar was honored for his pioneering contributions to algorithms and tools for analog and mixed-signal designs. As an academic, he developed a wide range of fundamental models, algorithms and tools for analog integrated circuit (IC) designs. As an entrepreneur, he co-founded Neolinear, one of the most successful analog tool companies, to bring his research efforts to the larger design community.

Rutenbar grew up in the suburbs of Detroit, did his undergraduate work at Wayne State University, and his graduate work at the University of Michigan, where he was co-advised by now-Emeritus Prof. Daniel E. Atkins and Trevor Mudge, the Bredt Family Professor of Engineering.

After Michigan, he was on the faculty at Carnegie-Mellon for 25 years, during which time he co-founded analog tool company Neolinear and sold it to Cadence. At CMU, he was the founder and director of the Center for Circuit and System Solutions (C2S2), chartered by major U.S. semiconductor companies and the Defense Advanced Projects Research Agency (DARPA) to pioneer a range of important technologies, notably in statistical circuit design and lithography-aware chip design.

From 2010–17, he served as Head of the Computer Science Department at the University of Illinois Urbana-Champaign, where he made major contributions in online education and the development of UIUC’s CS+X curriculum. He reworked his CMU course, “VLSI CAD: Logic to Layout,” into a Massive, Open, Online Course (MOOC) in 2013, providing EDA training to thousands of engineers; to date, his course has connected with over 50,000 registered learners from more than 150 countries.

In July 2017, Rutenbar joined the University of Pittsburgh as Senior Vice Chancellor for Research.