by Amanda Jackson
January 23, 2018
Dr. Maria Choi reflects on her career in electric propulsion and her experiences as a woman engineer in the aerospace industry.| Medium Read
Enlarge 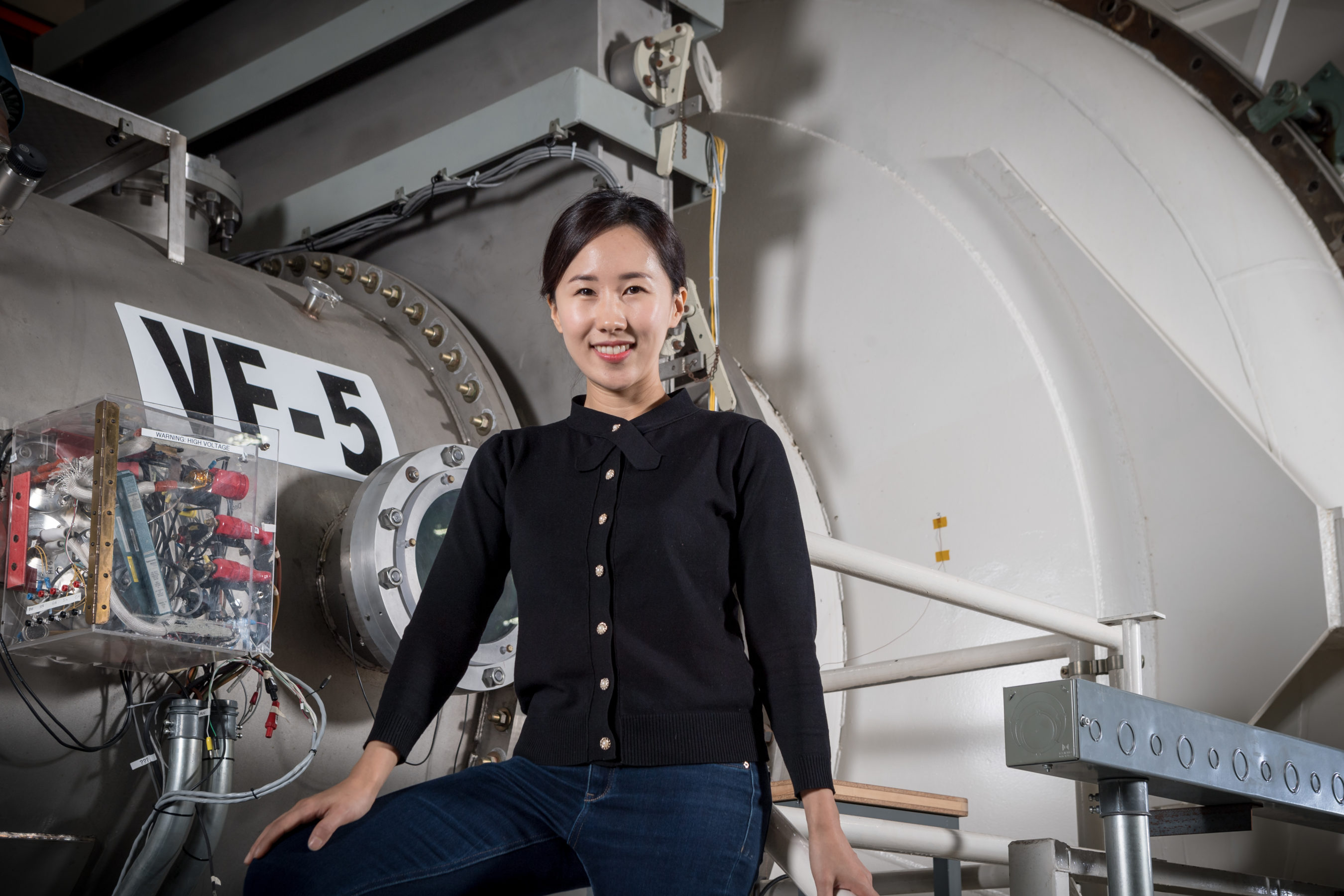 University of Michigan alum Dr. Maria Choi (Ph.D. AE ‘16) is a young professional – less than two years into her career at NASA – but an accomplished one. The focus of her research at Glenn Research Center is Hall-effect thrusters, a developing technology in the field of electric propulsion. In 2011, Dr. Choi received the NASA Space Technology Research Fellowship (NSTRF) and the National Science Foundation (NSF) Graduate Research Fellowship, giving her the opportunity to research with Professor Iain Boyd at UM’s Nonequilibrium Gas and Plasma Dynamics Laboratory as a doctoral student.

Now at Glenn Research Center, Dr. Choi works to improve computer simulation models of Hall thruster plumes. The goal of her research is to create a model that is robust enough to allow engineers to scale up Hall thruster technology for space exploration. She explains that she and her team “want to better understand high-power Hall thruster operation both in space and in a vacuum facility where the Hall thruster is tested in a vacuum chamber, emulating in-space operation. We currently use some assumptions but are continuing to improve the model so we can better predict how the thruster will operate in space.”

“It was my dream job to work at NASA as an undergrad. I am finally here, and I just want to continue doing my best, contributing to and advancing this field.”Dr. Maria Choi
Tweet

Although Choi is working in her dream job, her path to finding her passion was not straightforward. As an undergraduate in mechanical engineering at Clarkson University, Choi had multiple internships with NASA, one focusing on chemical propulsion. In that internship, Dr. Choi realized her path was not in mechanical engineering, but in aerospace. About NASA, Choi relates, “I just fell in love with NASA as an intern. I thought, wow, I want to work in this place – what does it take to work here? I should go to grad school and get a Ph.D. in aero.”

That NASA internship taught Choi that chemical propulsion was “already so advanced, already limited in terms of what we can do,” so she saw an alternative: electric propulsion. Choi relates that her mentors had warned her about the limitations of chemical propulsion and that “there were more possibilities in electrical propulsion, but no funding.” She remembers having been discouraged but fascinated with electric propulsion. In her senior year of her undergraduate studies, Dr. Choi applied for NSTRF and became a first-class recipient. With that opportunity, Choi says, “[the opportunities] all opened up.”

Dr. Choi, a talented researcher in a challenging field, feels at home at Glenn Research Center where “people are very passionate about what they do, and we all just love our work.” However, a widespread trend in the aerospace industry sets her apart. Dr. Choi is a woman in aerospace, an industry where, according to DataUSA.io, only 11.6% of the workforce is female. In her group, Choi is the only female aerospace engineer of twenty to twenty-five professionals. Encouragingly, she does not feel negatively impacted by the disparity: “Usually I don’t notice it, which is good. I feel like people don’t even notice that I’m the only woman engineer in the group. In terms of work, there is absolutely no difference.”

Women engineers are a minority in aerospace

Dr. Choi feels that the disparity between women and men in the aerospace industry can be closed through outreach. During her time as a Ph.D. student, Dr. Choi was Co-director of the Graduate Society of Women Engineers (GradSWE) at the University of Michigan. Before her 2015-16 co-directorship, she was GradSWE’s networking chair for three years. One of her main initiatives as networking chair was the introduction of the Female Faculty-Student Mixer, which brought together female engineering graduate students, faculty, and professionals from the Ann Arbor/Detroit area. Today, the event is one of GradSWE’s most popular events.

On the positive impact that her involvement in GradSWE has had in her professional career, Dr. Choi reflects, “GradSWE has been a tremendous help in fitting in this environment because there aren’t many women in aerospace, so it was really important for me to network with fellow female grad students and female faculty members. [The faculty members] inspired all of us and shared their personal and professional experiences and we learned from that, so it was a really good network.”

Being a student leader continues to inspire Choi, who is now an adjunct faculty member at Cuyahoga Community College in Cleveland, OH. In addition to her passion for Hall thruster research, Dr. Choi “still love[s] teaching and mentoring students, so [she’s] continued that as a professional.” 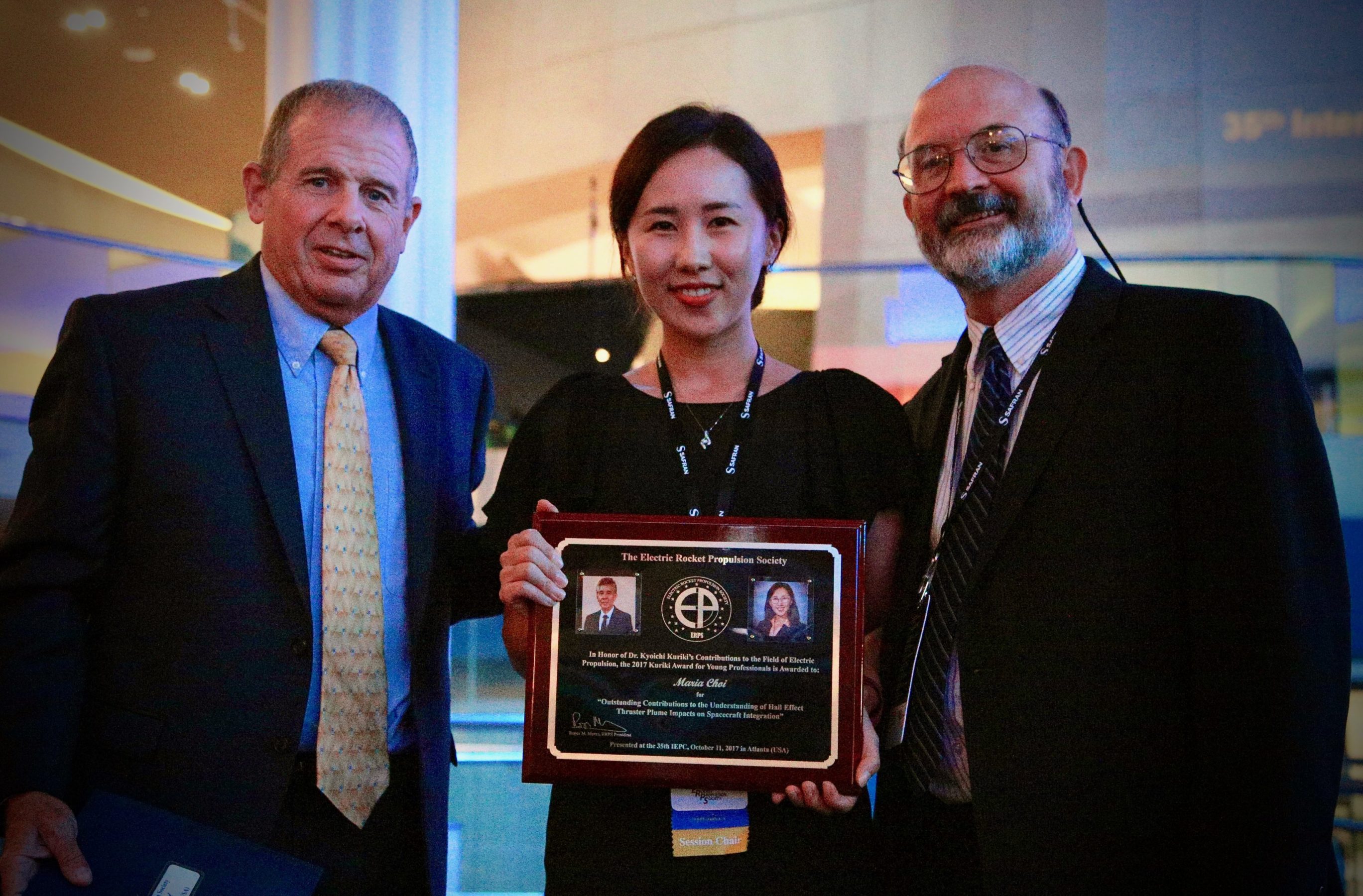 Ultimately, though, Dr. Choi is driven by her love for her field: “It was my dream job to work at NASA as an undergrad. I am finally here, and I just want to continue doing my best, contributing to and advancing this field. Being in this field, I’m living my dream, it’s very wonderful and amazing.” For her leadership and contributions to Hall-effect thruster research, Dr. Maria Choi is the first recipient of the Kuriki Young Professionals Award (2017) from the Electric Rocket Propulsion Society.