Two former Civil and Environmental geotechnical engineering doctoral students, Kenneth Stokoe and Dennis Hiltunen, collaborated to present a workshop on three dimensional (3-D) characterization of the underground. CEE Professor Emeritus, Richard Woods, was co-chairman of both of their doctoral committees when they studied at U-M.

Sinkholes appearing at the ground surface are frequent phenomena in some regions of the USA. Long before their emergence at the surface, the origins of the sinkholes are already underway. Current methods of finding the early stage cavities to mitigate their progression have not been very successful and are very expensive. Knowledge of the low-velocity anomalies (sinkholes) is crucial for the design and the safety of existing structures, since the anomalies can cause structural damage or collapse.

A new method of characterizing the underground in 3-D which can help identify developing sinkholes was demonstrated in a two-day workshop at the University of Florida, Gainesville on October 26 & 27, 2017. The workshop was organized by the University of Texas-Austin Natural Hazards Engineering Research Infrastructure (NHERI) Equipment Facility, directed by Professor Kenneth Stokoe (Ph.D. U of M, 1972), and the University of Florida, Gainesville, Professor Dennis Hiltunen, (Ph.D. U of M, 1988), both CEE alumni. The UT Austin NHERI Experimental Facility is supported by a grant from the National Science Foundation under the George E. Brown, Jr. Network for Earthquake Engineering Simulation (NEES) program. 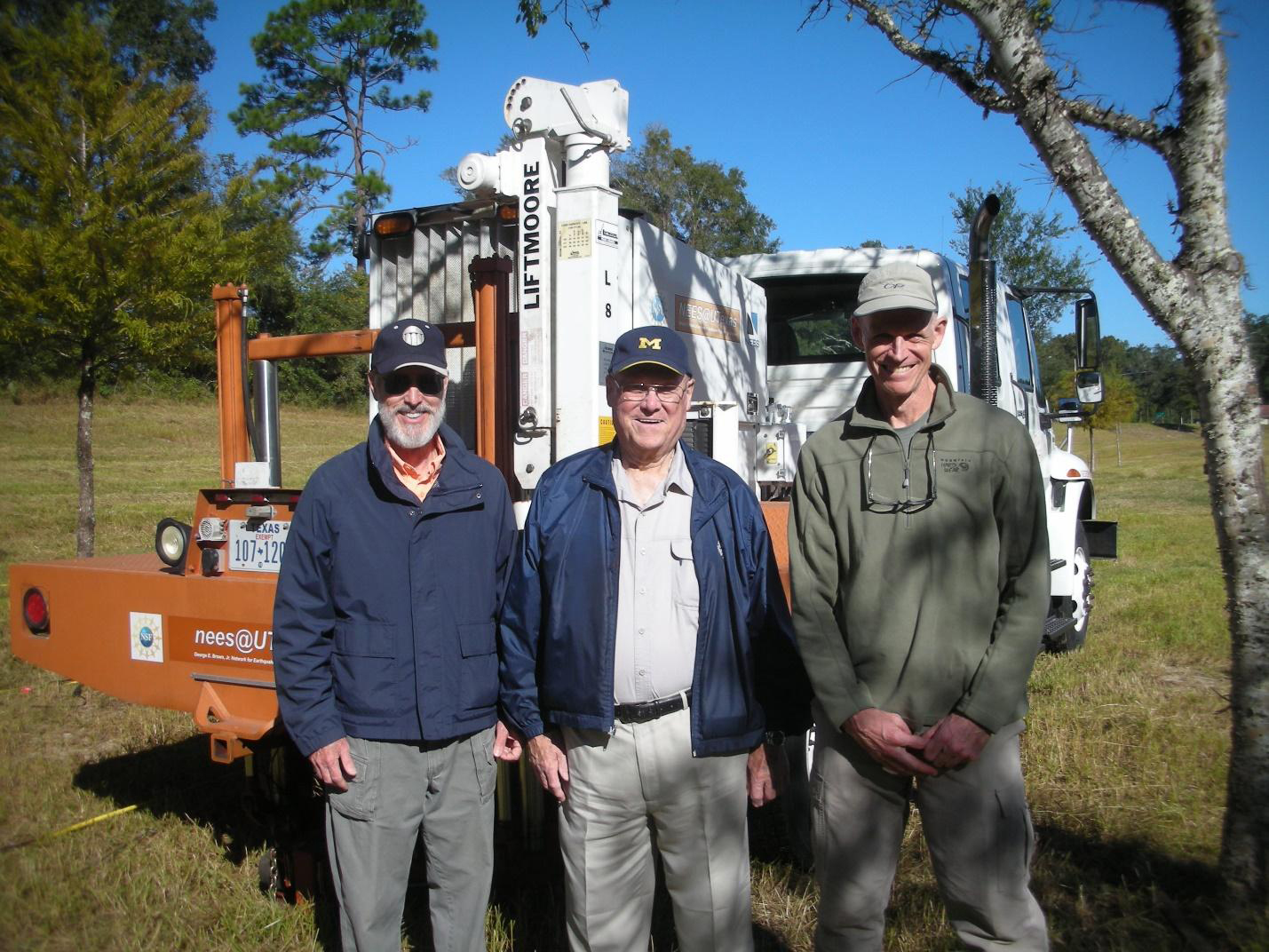 The workshop consisted of one half-day introductory session on concepts and equipment and a half-day field demonstration and proof of concept. The field site operated by Prof. Hiltunen consisted of an approximately 20 acre former runoff retention pond constructed by the Florida Department of Transportation, which does not retain water because of leakage through buried sinkholes. The field site is approximately 29 km from Gainesville, and approximately 150 km from Jacksonville. The northern portion of the site has been susceptible to sinkhole formation and a number of large sinkholes have formed and been repaired. However, the southern portion has been relatively free of sinkholes and is an ideal location for characterizing karst limestone sites.

Prof. Hiltunen’s student from the University of Florida, Dr. Khiem Tran, and his students at Clarkson University performed the data analysis of the data collected during the demonstration portion of the workshop. 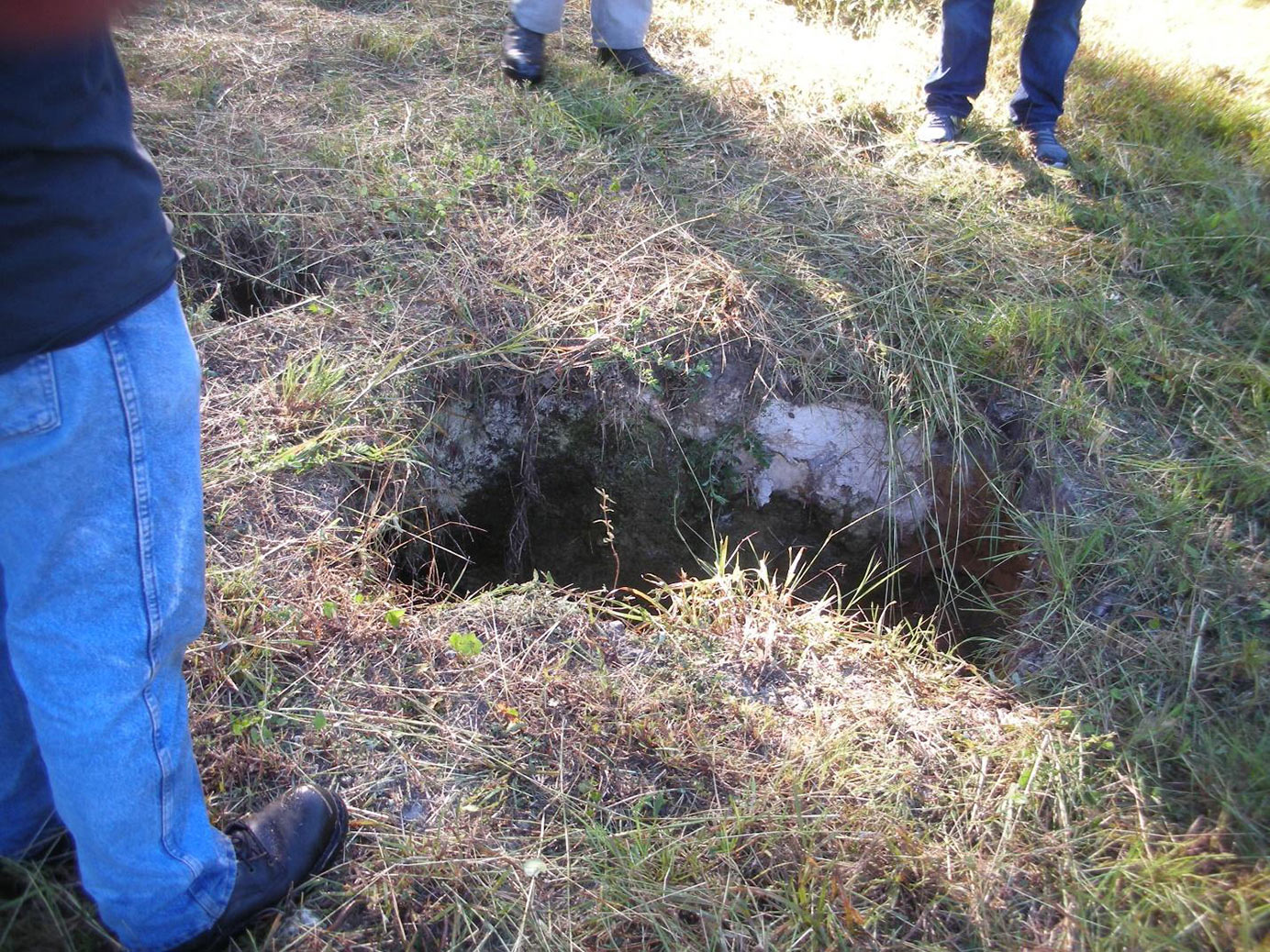 The specific equipment used by the NHERI@UTexas team to create seismic waves of multiple frequencies consisted of a mobile truck-mounted hydraulic shaker called “Thumper,” which created both vertical and horizontal loadings on the ground surface. A dataset of 3-dimensional waveforms that can be processed for 3D sinkhole imaging purposes via full-waveform inversion was collected during the workshop.

This proof-of-concept demonstration revealed many buried sinkholes and some surface sinkholes. All the data from this demonstration are available from NHERI@UTexas for interested researchers who wish to evaluate their own 3-D imaging algorithms.