Michigan Engineering civil and environmental engineering professor Jim Wight arrived in Japan for the first time in 1980 as part of a long-term earthquake engineering project. Wright and other U.S. structural engineers were joining their Japanese counterparts at a new research lab in Tsukuba, Japan, where they would erect a seven-story reinforced concrete structure whose sole purpose was for testing.

“Gigantic!” is how Wight describes it. The project had all the makings of a great adventure, and at the end of it, buildings worldwide would be designed and engineered in ways that would make them safer and more resistant to earthquakes.

The project had all the makings of a great adventure, and was intended to cause buildings worldwide to be designed and engineered in ways that would make them safer and more resistant to earthquakes.

Those displacements were calculated, simultaneously, using a software program that predicted the displacements occurring at each floor level during a previously recorded earthquake.

“Based on these forces, and the part of the recorded earthquake,” Wight explained, “a new set of floor displacements would be calculated and the process repeated. We started dictating to the earthquake, ‘OK, so you’re going to damage our building. But we’re going to tell you where that damage is going to occur.’”

And that philosophy, says Wight – “trying to control where the damage is going to be done – is the one that still exists today.”

Wight’s expertise is not only the subspecialty of earthquake engineering but concrete (and how it responds in earthquakes). Fellow Michigan earthquake engineer, now retired Subhash Goel, went to Japan as part of this same program, but for phase 2, to conduct similar experiments with his specialty, steel (and hybrid) structures. 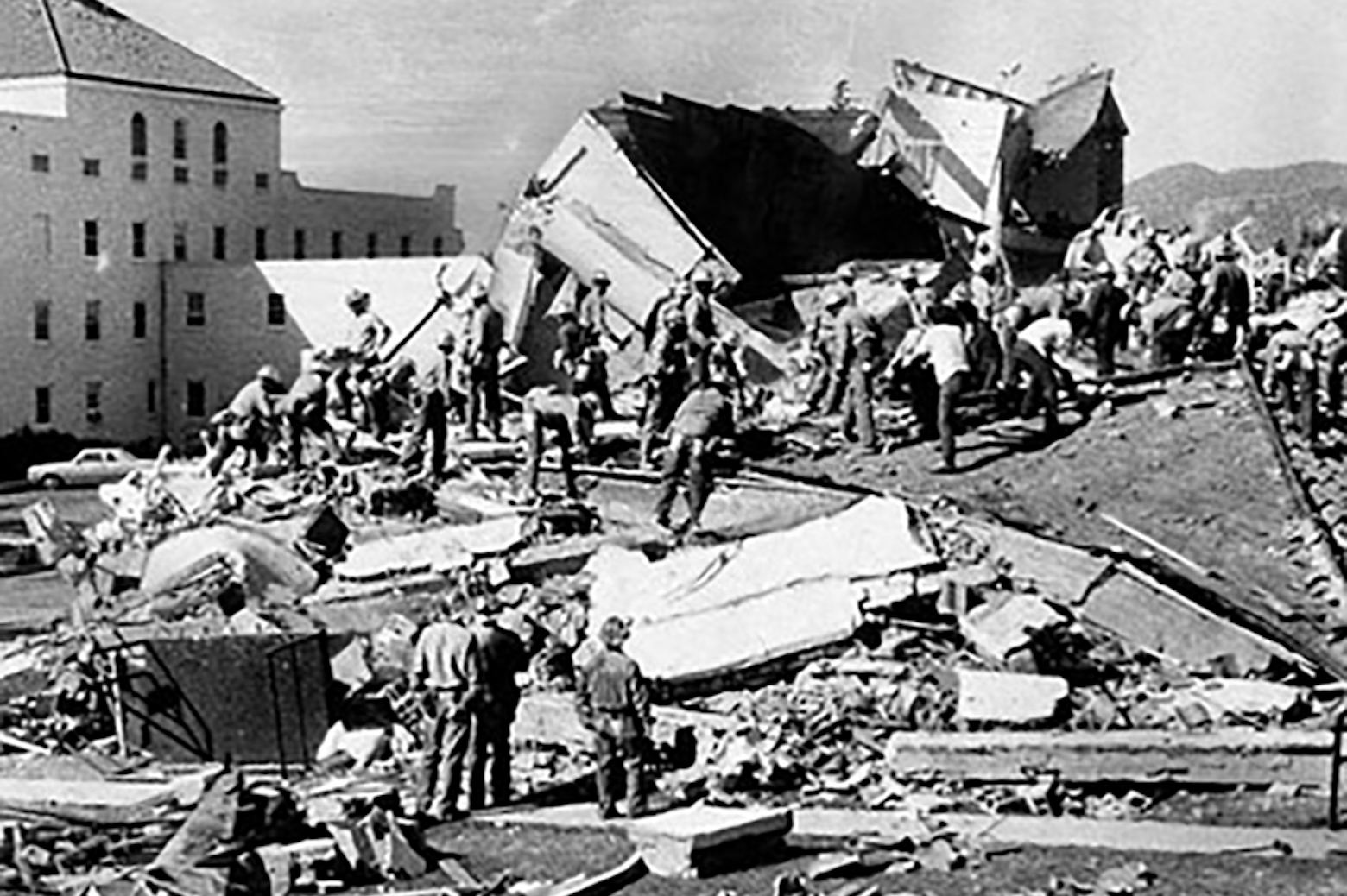 IMAGE:  The deadly Sylmar earthquake, Feb. 9, 1971, 6.6-magnitude, changed the focus and trajectory of Professor Jim Wight's earthquake research. In that earthquake 62 people died, many of them at a hospital that collapsed in Sylmar. Photo Los Angeles Times.

Subhash Goel arrived at Michigan from India in 1965, a year before then-department chair Robert Hanson. Wight was still in graduate school at the University of Illinois when the Sylmar earthquake of 1971 struck the San Fernando Valley the morning of February 9 with a magnitude of 6.6. It ripped along a 12-mile fault zone beneath the San Gabriel Mountains at 6:01 a.m., and while it wasn’t technically a huge earthquake – at a magnitude of 8 or 9 – when the dust cleared, 64 people were dead and more than 2500 were injured. It flattened freeway overpasses, collapsed hospitals, toppled power stations, sparked fires and threatened to burst dams and flood homes. It collapsed parts of a local veterans administration hospital built in unreinforced concrete in 1926.

That quake influenced the kind of experimental research Wight did for his Ph.D. thesis – he already was in the earthquake program – and was the kind of “aha!” moment that would give him focus.

Wight’s and his colleagues’ challenges became clear. “Maybe our earthquake codes and our understanding of earthquakes were not up to the level they needed to be to protect people and the public investment in buildings and communities,” they realized.

It also made sense for the U.S. and Japan to work together, since they were both scientifically sophisticated countries, with significant seismic risk.

Goel went to Japan “a couple of times,” to test two steel structures – once in the fall of 1983 and once in the winter of 1984. Goel also understood this cooperative project was a golden opportunity for Michigan’s earthquake engineers. 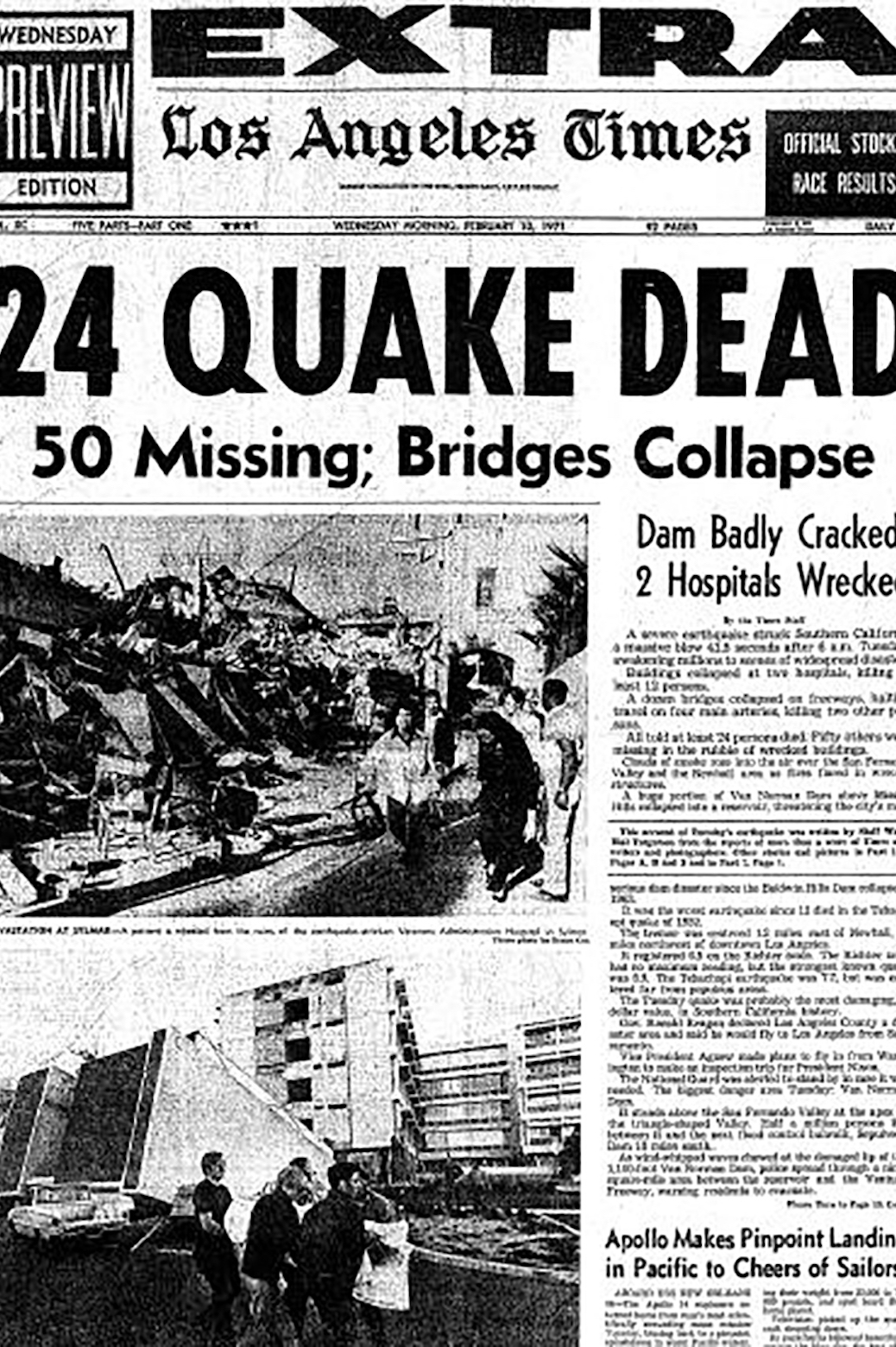 That wasn’t the only excitement Wight experienced in Japan. “I remember the first discussion I had with some Japanese colleagues,” said Wight. “They asked me, ‘Have you ever felt an earthquake?’ I was somewhat embarrassed to say, ‘No I never have.’ I was looking forward to experiencing [one].”

Wight was in Tsukuba, what they called the “New Science City,” located about 70 miles northeast of Tokyo, on sabbatical leave with his wife and two young children. “When it started it’s like suddenly my ears perked up. ‘Wow, what’s going on here?’ I was just kind of experiencing it, feeling what was going on. I knew I was in a very safe building. I wasn’t worried about that. So I could experience the happening, feeling it getting a little more intense.”

There are different kinds of waves that come along in an earthquake – “P” waves, which are sometimes referred to as compression waves, that feel like an up and down motion; and “shear” waves, which move through the ground a little more slowly.

“So the P waves always arrive first,” says Wight. “They kind of shake you sideways, back and forth. I could feel the arrival of those two different types of motion.”

Back in Ann Arbor

“Our lab was built in 1985,” said Wight. “It had what you call a strong floor…a couple of concrete walls on two sides of this concrete floor, and when we put a structure in there, and attach some hydraulic actuators…we can force that structure to deform as it might be deformed during an earthquake.”

There are different kinds of waves. “P waves always arrive first, shake you sideways, back and forth. “Shear” waves move more slowly. I could feel the arrival of those two different types of motion.”

Unlike Japan’s lab, where full-story buildings of steel, concrete and a mix of both were tested, Michigan’s was smaller, and tested parts such as beams and columns. Roman D. Hryciw, assistant professor of civil engineering (geotechnical), tested how soil responds during an earthquake, in a smaller lab in G.G. Brown, called the Frank E. Richart Jr. Soils Dynamics Laboratory – a fully-equipped geotechnical laboratory with specialized testing equipment to evaluate the static and dynamic property of soils.

“We had a lot of momentum then,” Wight says. “After we built the lab (in Ann Arbor), for nearly 15 years, we had it really pretty active.”

All agreed the U.S.-Japan program was a huge success. “It advanced our knowledge of how structures behave; how to control the behavior, so they behave in a desirable manner,” says Goel. 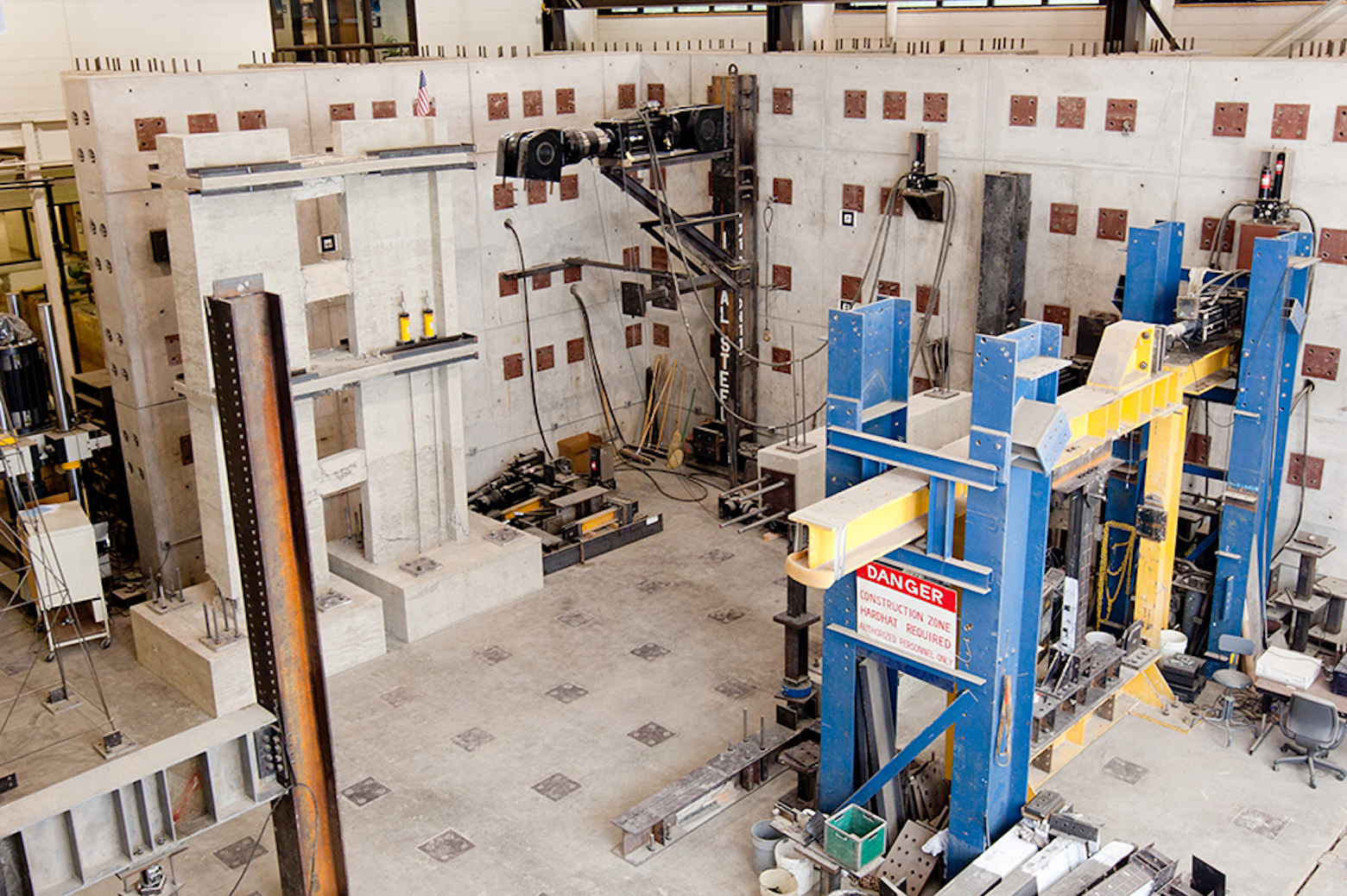 Desirability includes flexibility, which means the ability to deform without failure and fracture. During an earthquake, something has to give.

“The entire building deforms. The horizontal, vertical, there is motion. We’re talking about buildings – floor levels,” says Goel. “That energy is transmitted. The ground is feeding energy into the structure and the structure has to absorb that energy. So it deforms, and many times there is yielding. We don’t want displacement to be too large or a story to fall or collapse. So the columns are very important. We don’t want columns to be damaged – or life lost.”

Like Wight, Goel also found unexpected as well as expected excitement in Japan.

“I experienced an earthquake for the first time in September 1983, when I visited Tsukuba, Japan,” Goel laughs. “We were on the sixth floor of the hotel building – kind of a narrow hotel. In the morning, around 3 or 4 o’clock, my bags started shaking like it was on rollers! I woke up and said, ‘It must be an earthquake.’ So the next day when I went to the lab, they said, ‘Oh, there was an earthquake.’ It excited me!”

Goel notes, though, that he and Wight experienced only “kind of small earthquakes” in Japan. The earthquakes in Japan are “a little different,” he says, because of its “volcanic kind of setting.” Earthquakes in Japan are caused by underground volcanic energy, whereas in most of other places, including the U.S. and the area of the San Andreas fault, “most of the big earthquakes are because of movement of the earth’s crust – when one plate slides against the other.”

“For forty or fifty years,” Goel says, “the philosophy was, in a moderate earthquake the structure should not have much damage, and should be reparable. But if there is a larger quake, like an 8 or 9 magnitude, the structure could be deformed and may have to be torn down and rebuilt, but no life should be lost.

Other studies coordinated with the U.S.-Japan program, and “out of that came better building codes in Japan and the U.S. It was a very good learning experience for both countries.”

Research has moved from earthquakes to “multi-hazard,” which includes windstorms such as tornadoes and hurricanes.

“The three of us together,” Wight says, referring to himself and Hanson and Goel, “were really doing quite a bit of work and we were able to work well together. It was a pretty solid group, no doubt about it.”

The National Science Foundation has moved from earthquakes to “multi-hazard” research, which includes windstorms such as tornadoes and hurricanes.

Even “blast-resistant design,” says Wight, is covered by the NSF, given the realities and results of global warming and terrorism, and the increased likelihood and frequency of other natural and unnatural disasters. Like earthquakes, these are dangerous challenges.

But like experiencing an earthquake for the first time, understanding and mitigating these risks can also be exhilarating.

“When you’re in an area where there’s clearly not a lot known,” says Wight, “you can do things. You can really advance the knowledge. And that’s pretty exciting.”