by Sandy Swisher
Michigan Engineering
December 20, 2017
A leader whose methods and means were ahead of their time, Brown remains a Michigan icon.| Medium Read

George Granger (G.G.) Brown was known not only for his intellect, vision, and career accomplishments but also for a few peculiar physical characteristics. His students and colleagues recognized his lecturer’s voice – which they could hear from well down the hallway. And this high-decibel manner of speaking apparently carried over into one-to-one conversations as well. One of Brown’s doctoral students, G. Brymer Williams, recalled that Alfred H. (A.H.) White, among the founders of the Department of Chemical and Metallurgical Engineering, admonished “an inspiring young professor, who could [also] be heard all over the corridors when he lectured, that G.G. Brown was a superb teacher but not because he spoke in a loud voice.”

Cedomir Sliepcevich, another of Brown’s PhD students who taught in the department from 1942-1955, noted that in addition to his booming voice, Brown was an imposing figure at nearly 6’ 4” and 220 lbs. “His close acquaintances would call him ‘G.G.’; both his intimidated admirers and his fainthearted critics referred to him as ‘Great God’ with no disrespect intended.”

His close acquaintances called him “G.G.” Intimidated admirers as well as fainthearted critics called “Great God,” with no disrespect intended.

As was common in those days, Brown would not only teach but also would conduct research and work on a graduate degree.

As a graduate student, Brown explored thermodynamics from the physicist’s point of view and was introduced to the processes of the petroleum industry by his advisor, Professor Eugene H. Leslie, who had been a chemist at the General Petroleum Corporation before joining the faculty of chemical engineering. Brown’s doctoral thesis in 1924 was titled “The Rate of Pressure Rise in Gaseous Explosions.” Upon receiving his PhD in 1925 Brown was appointed assistant professor and began organizing the first graduate courses in thermodynamics and in petroleum refining.

The blending of thermodynamics with his experience with the petroleum industry led Brown to develop another major program of research in his lab. More than 20 of his students studied the properties of hydrocarbons, vapor-liquid equilibria, and the application of this information to such processing operations as distillation, absorption, and extraction. 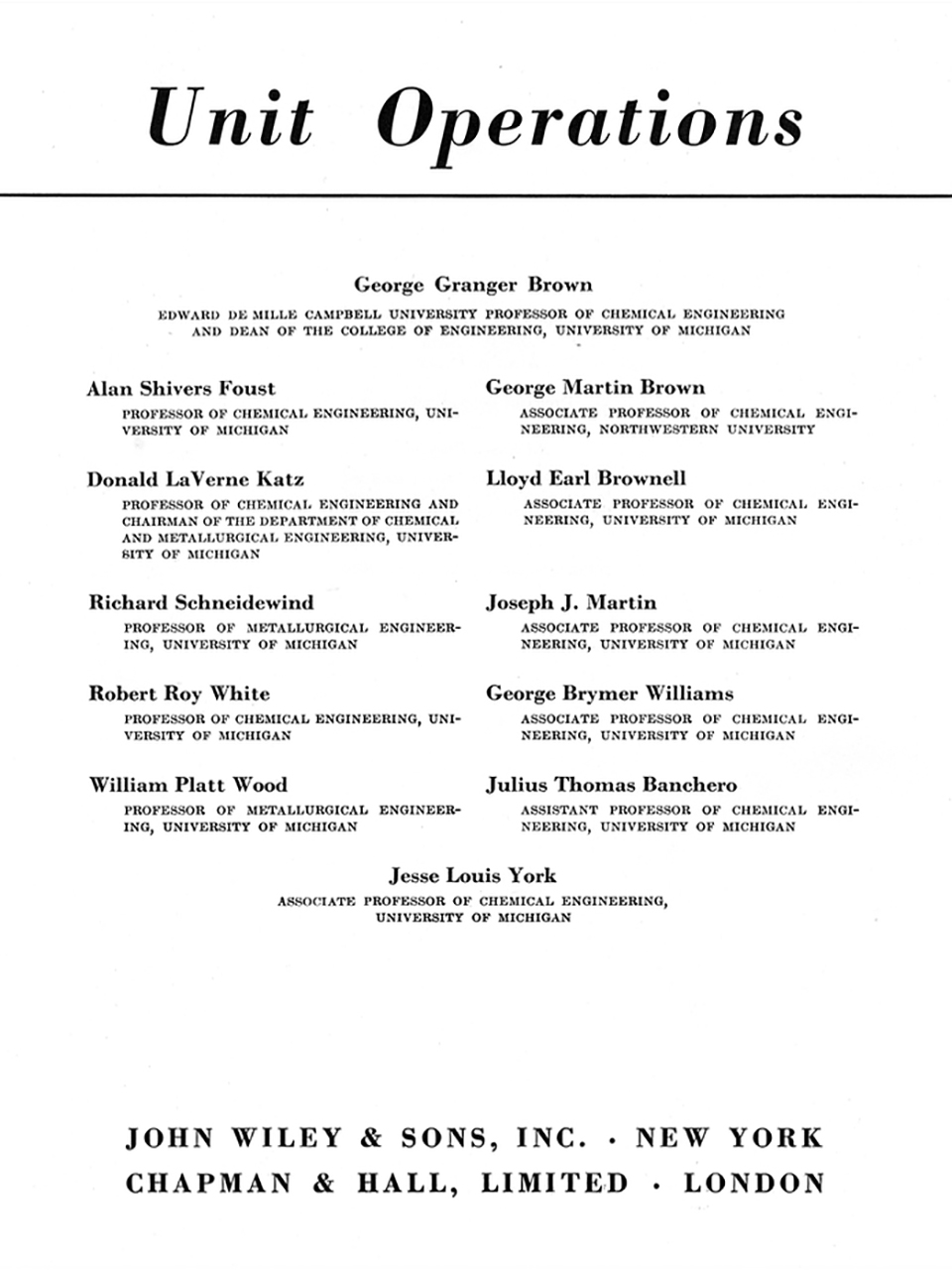 Professor Brown would soon be regarded by fellow engineers as a pioneer in the fields of combustion and fractural distillation, and would be widely respected as a researcher and consultant on petroleum, natural gas, liquid fuel utilization, gaseous explosions, thermodynamics, and clay and sandy resources of Michigan.

With a love of discussion and debate Brown was provided an excellent testing ground for his novel ideas. His doctoral student, Donald L. Katz, described Brown’s way of bringing intellectual excitement to the classroom and laboratory by encouraging students to find a “new meaning to logic and processes of reasoning as methods of solving engineering problems.” Katz, who would succeed Brown as chair of the department, said, “Dr. Brown raised the curtain to a broader intellectual horizon and inspired many to explore new fields of research. The young instructor felt Professor Brown’s support, friendliness, and encouragement as he embarked on the teaching of a new course or into a new field of investigation. [His] willingness to consider new and better ways of doing things made him a friend of progress.”

Cedomir Sliepcevich taught both the graduate and undergraduate thermodynamics courses after G.G. Brown moved on to administrative duties. Sliepcevich first got to know Brown in 1941 as a master’s student in Brown’s graduate thermodynamics course. He says that for the first dozen or so classes the students were asked not to take notes because Brown wanted them to concentrate on thinking. “His classes were neither formal lectures nor pedantic recitations. They were, simply put, class discussions with a premium on argument. He encouraged the students to get in small groups outside the classroom solely for the purpose of arguing or coming to grips with the esoterics of thermodynamics.”

According to Sliepcevich, Brown never used a textbook, as he believe them to be too preoccupied with equations, and emphasized memory over understanding and thought with their “cookbook style” of problems solving.

In 1942, Brown was selected to succeed White as chair of the Department of Chemical and Metallurgical Engineering. As chair, Brown concentrated as revising the curriculum, introducing undergraduate courses in thermodynamics, solid-state science, and process design. He also led a group of twelve staff members in writing the textbook, Unit Operations.

As a doctoral student, Donald Katz said Brown encouraged students to find a “new meaning to logic and processes of reasoning as methods of solving engineering problems.”

The book, published in 1950, revolutionized chemical engineering curricula. After a longstanding emphasis on specific industries, such as petroleum or chemical, this book organized curricula into teaching unit operations, or basic steps in processes. The text was promptly adopted by 115 institutions, including almost every chemical engineering department in the United States.

Jim Wilkes, a chemical engineering faculty member from 1960 to 2000, says he first came across a copy of Unit Operations as an undergraduate at the University of Cambridge in his native England in 1953. Wilkes regards the volume as the most significant book in the history of chemical engineering.

“The work is all-embracing, and places almost all chemical engineering operations on a sound scientific base,” according to Wilkes, who still treasures his copy, and says Brown’s work is what ultimately brought him to Michigan. Wilkes also proudly notes that he had the pleasure of working with eight of the twelve coauthors when he joined the faculty in 1960.

Planning for the future of energy

In 1950, Brown was appointed director of the U.S. Atomic Energy Commission’s Division of Chemical Engineering, which was responsible for the chemical engineering phases of the Commission’s reactor development program and with the establishment and operation of reactors at the new Reactor Testing Station in Idaho and in West Milton, New York. Brown also was involved with the development of processes for the recovery of uranium from depleted nuclear fuels and disposal of radioactive waste material. 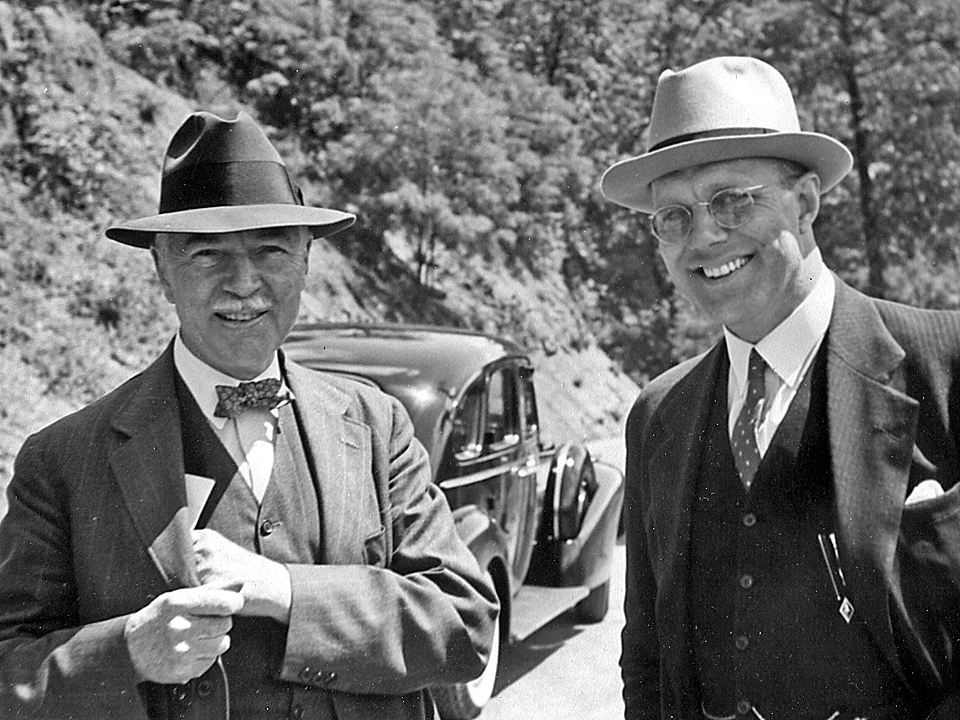 IMAGE:  A.H. White and G.G. Brown on a trip to Charleston, West Virginia, at the May 1938 AIChE meeting.

Brown’s concern about how the United States would continue to provide power as fossil fuel reserves were dwindling first manifest itself publicly in a talk about powering industrial plants from nuclear power Brown presented at the Combustion and Industrial Fuels Conference in 1951. Brown predicted at that time that the United States would “reach the limit of its capacity from production from coal, gas, oil and water in about 25 years.” And he said nuclear power might very well be the additional source of energy needed to satisfy the country’s enormous needs.

When selected by the University in 1955 as the first engineer to give the Henry Russel Lecture, Brown continued on this theme with his talk on the “Future Sources of Power.” In his lecture, Brown said the country needed to put more emphasis on developing nuclear and solar power. He predicted that we would use central atomic plants to produce electricity for heating and cooling, and for powering cars, and that by the year 2000 many automobiles could be “operated on electricity from central plants and acres of land be covered with mirrors to gather energy from the sun.” Brown also suggested that cars in cities might be connected to an overhead line like a trolley car and, while traveling on side roads, they might operate on storage battery power. “The batteries could be recharged by electricity from the station during off-peak load hours.”

Brown was recognized for his contributions to chemical engineering with the William H. Walker Award from AIChE in 1939 and the Hanlon Award from the Natural Gasoline Association of America in 1940. The University recognized his scholarship by appointing him the Edward DeMille Campbell University Professor of Chemical Engineering (named after the first chair of the department) in 1947 and by selecting him to be the Russel Lecturer. Brown also served in several positions with the American Institute of Chemical Engineers.

In 1951, Brown became the sixth dean of the College of Engineering. As dean, he introduced the science engineering program, promoted graduate programs in nuclear engineering and instrumentation engineering, and instituted educational programs to give engineering students greater understanding of the basic sciences to better prepare them for their careers. He also initiated an industrial program in 1954 to improve communications between the College and industry. 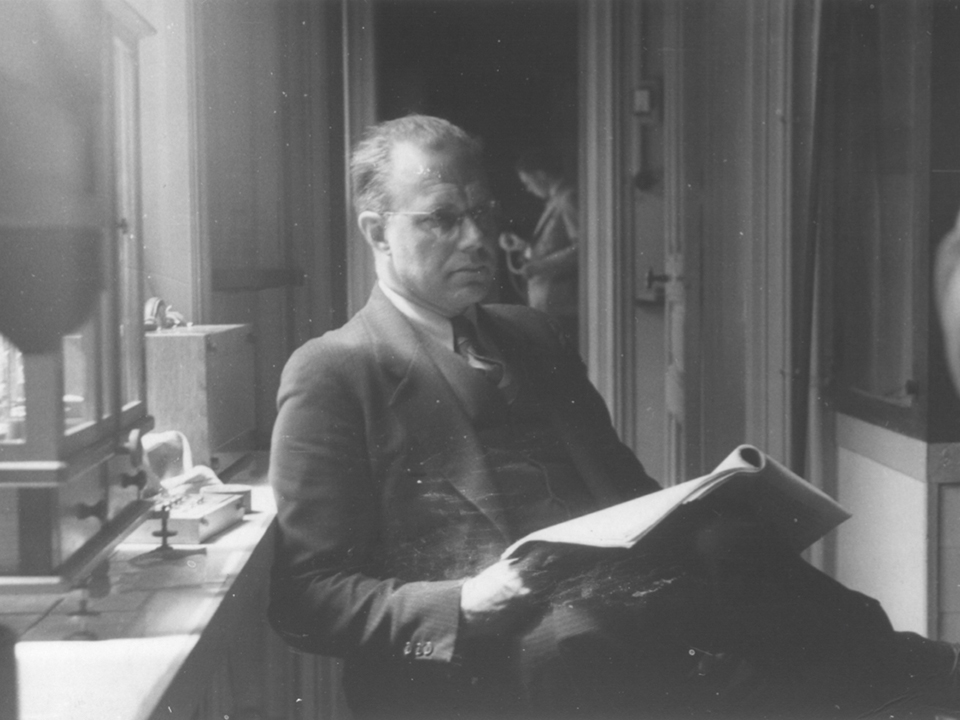 Unfortunately, Brown would not live to see most of the North Campus expansion, as he died, of lung cancer, on August 26, 1957, at age 60. In October of that year, the University announced that a group of engineering buildings proposed on North Campus would be known as the George Granger Brown Memorial Laboratories. The building would include a laboratory for fluids engineering, another for materials, metallurgy and structures, and a lab to study highways. The G.G. Brown Lab building is still on North Campus but has been expanded and modernized through several renovations over the years.

In 2000, Ronald G. Larson, from the Department of Chemical Engineering, was appointed the George Granger Brown Professor.

Sources for this story include A Century of Chemical Engineering at the University of Michigan, compiled by James O. Wilkes, 2002; “An Appreciation of George Granger Brown,” by Donald L. Katz, 1957; “Recollections of G. G. Brown,” Cedomir M. Sliepcevich, 1997; U-M News, January 4, 1958; and www.lib.umich.edu/faculty-history/faculty/george-granger-brown 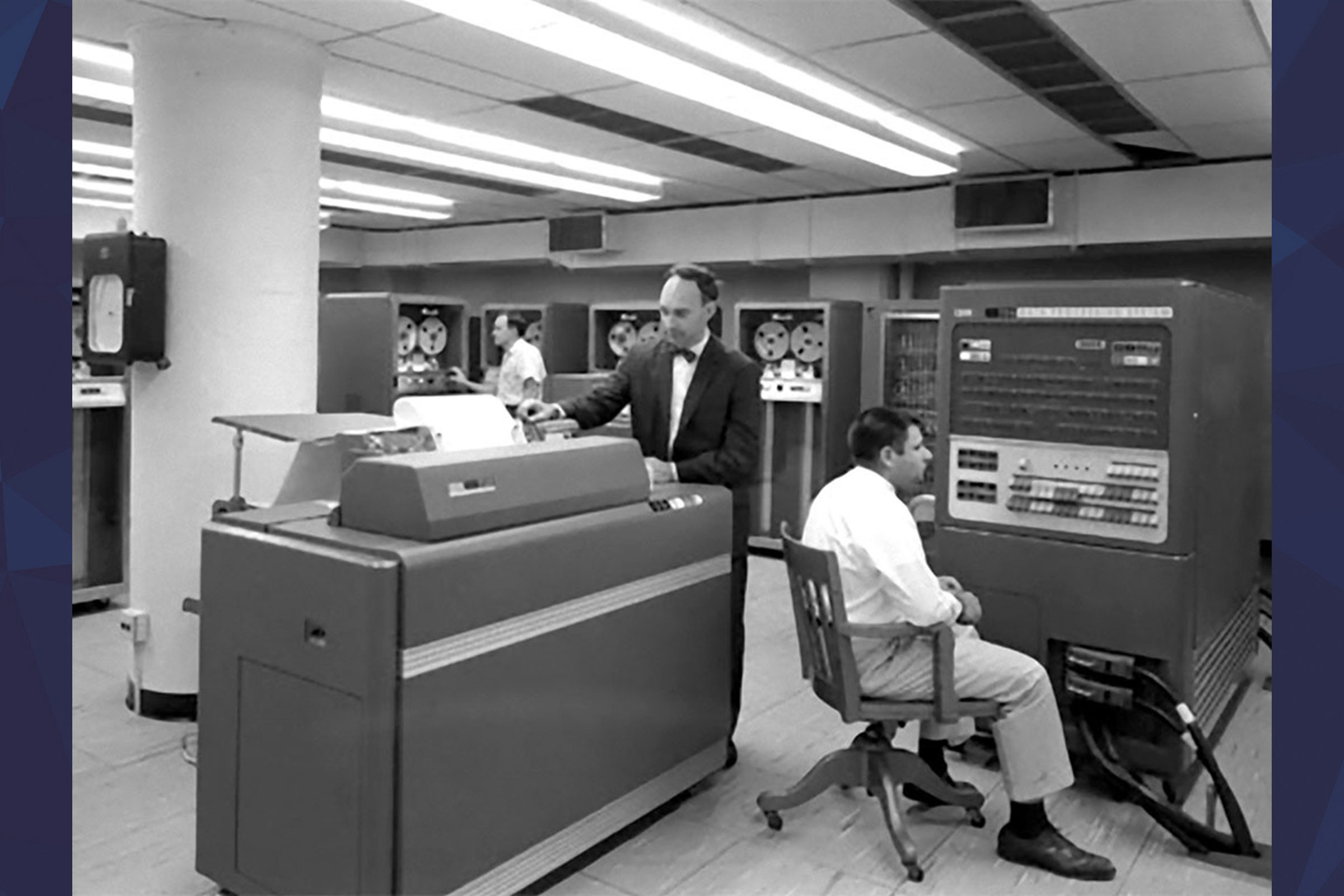 Donald Katz, professor and chair of the chemical and metallurgical engineering department from 1951-62, took the College   from analog to digital solutions.| Medium Read 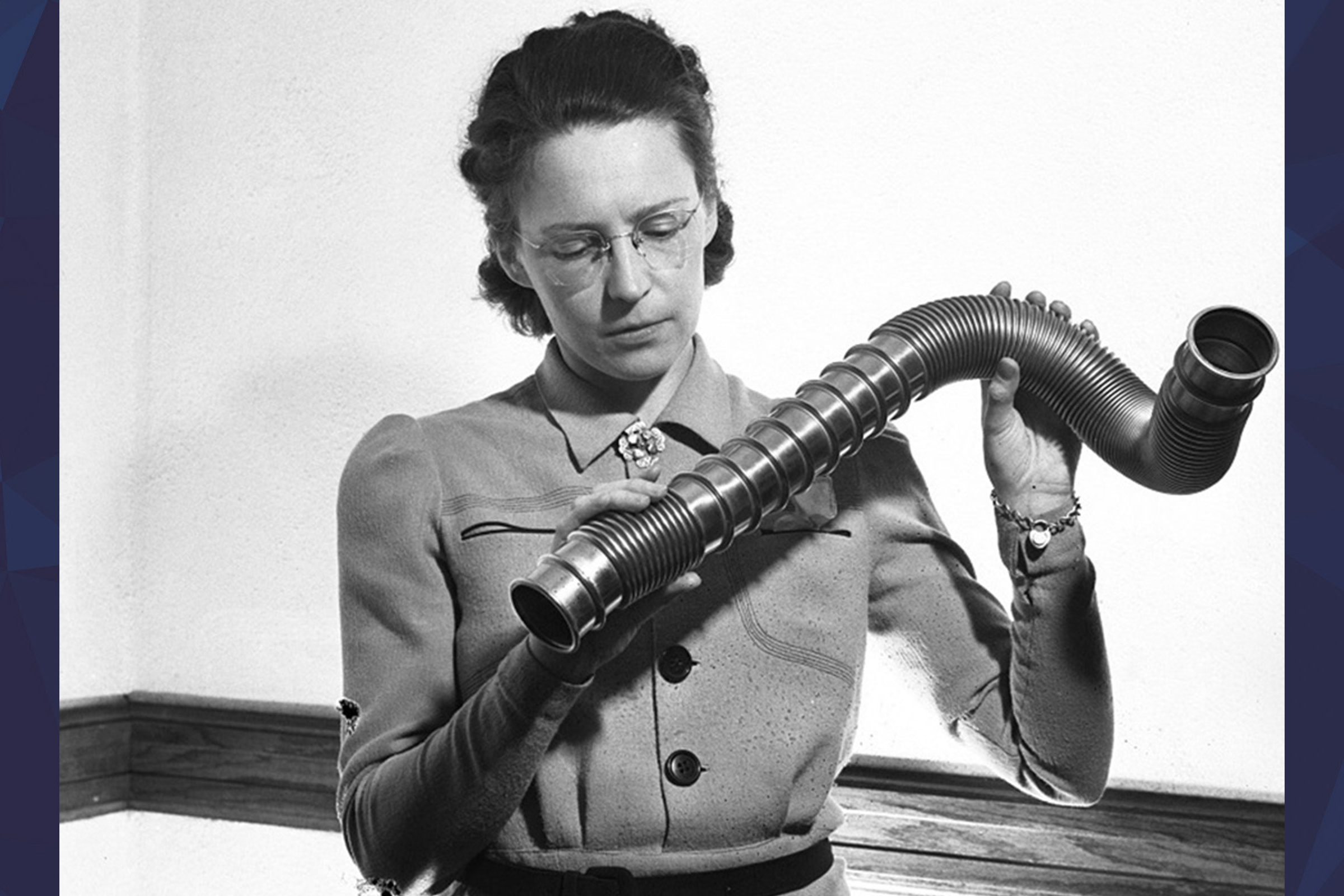 Queen of the hurricanes: An engineer and feminist for the ages

Elsie MacGill, the world’s first female aircraft designer, drew strength from the women who came before her.| Medium Read