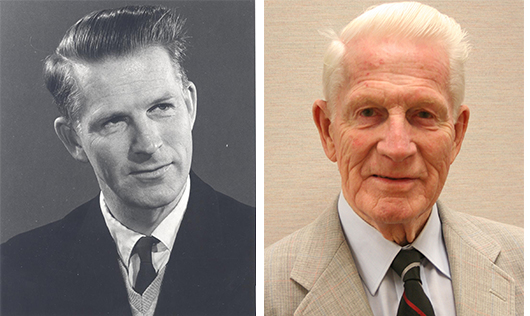 Thomas B. A. Senior, professor emeritus of Electrical Engineering and Computer Science, passed away peacefully November 24th at the age of 89.

Professor Senior was a devoted member of the department for 41 years as an active faculty member, and another 19 as an emeritus faculty. He was known for his fundamental contributions to electromagnetic and acoustic scattering, for his remarkable legacy of service and leadership to the department and professional community, and for his excellence as an educator.

Born June 26, 1928 in Yorkshire, England, Professor Senior received his MSc and PhD degrees in Applied Mathematics from Manchester and Cambridge Universities in 1950 and 1954, respectively.

He joined the University of Michigan in 1957 as a researcher at the famed Willow Run Laboratories. He was specifically recruited by Kip Siegel for his experience detecting V2 missiles, first launched in WWII.

During the 1970s, Senior and his group were the first to recognize how large wind turbines can cause interference to electromagnetic systems, such as televisions. He developed procedures that are now part of all environmental assessments of wind turbines.

During his career, Prof. Senior authored or co-authored three books. The first, Electromagnetic and Acoustic Scattering by Simple Shapes, was a foundational work that emerged from Willow Run research on the radar detection of aircraft and missiles. The other two were Mathematical Methods in Electrical Engineering and Approximate Boundary Conditions in Electromagnetics. He also authored more than 250 refereed journal articles.

But research was only part of the legacy of Professor Senior. His contributions to the department and profession, and his devotion to his students, are equally remarkable.

Professor Senior served as Acting Chair for the EECS Department in 1987; Associate Chair for Academic Affairs from 1988 to 1998; Associate Chair of the former Electrical Science and Engineering Division, from 1984 to 1998; and as Director of the Radiation Laboratory (RADLAB) from 1974 to 1987, and Associate Director from 1962-74.

Tom Senior was a prince of a man: superb teacher, impressive scholar, and dedicated administrator. He will certainly be missed.

Professor Senior was an icon at the Radiation Laboratory of the University of Michigan and in the Electromagnetic Community at large. He was an excellent teacher, mentor and a scholar par excellence. I will certainly miss our enlightening discussions and his enthusiasm for science.

Prof. Senior directed the RADLAB at a time when military research, especially classified research, on campus was a target for student activists. In 1983, 26 students staged the first of several lab sit-ins in protest of the university’s involvement in military research. Called the Progressive Student Network, the members managed to slow operations in Senior’s group for several days. A counter-protest group, naming themselves the Nuclear Saints of America, eventually converged on the lab as well, intent on resuming its research activities uninterrupted and “cleansing the lab from evil forces.” 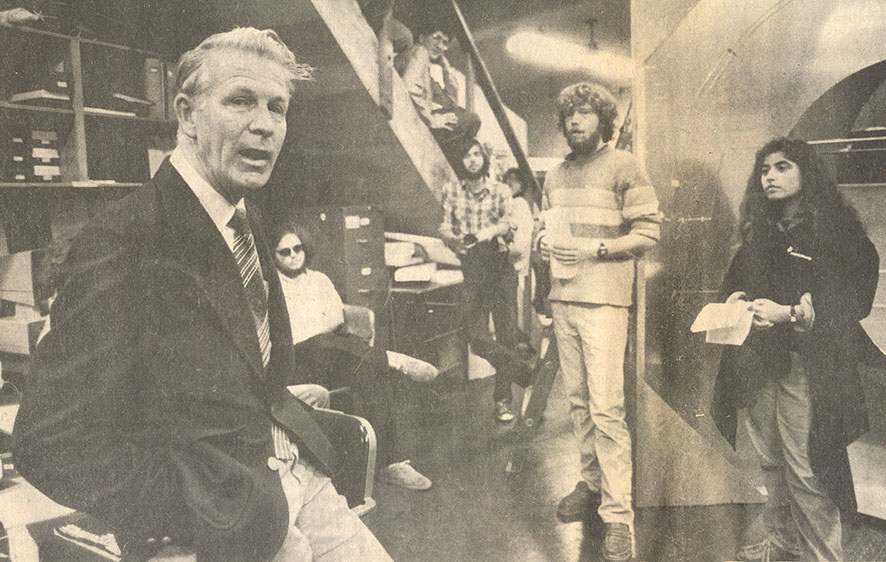 IMAGE:  Prof. Thomas Senior listens to students Amos Cornfeld and Nancy Arnoff read off their list of demands during the students' sit-in at his laboratory yesterday. Photo by Doug McMahon. Source: The Michigan Daily, November 8, 1983.

When the EECS Department was formed in 1984 out of the previous ECE Department, the Computer, Information and Control Engineering (CICE) graduate program, and the Department of Computer and Communication Sciences (CCS), Professor Senior was reponsible for completely revamping the course numbers and selections for the department. It was a daunting activity that he recalled with remarkable detail and emotion even in his latter years.

He was truly the right hand man to former Department Chair George Haddad, who served as Chair between 1975-1986 and 1991-1997. Professor Haddad wrote:

Tom served the Department in many capacities and always did an outstanding job in all his activities. He was a great scholar and teacher and his contributions to the profession and the Department are unparalleled. I depended on Tom immensely when I served as Chair. He was always ready and willing to serve with distinction on every assignment. He was a team player and always put the interests of the Department and his colleagues before his own. I will miss his advice and friendship and wish to convey my sincere condolences to his family.

In the professional community, Professor Senior was active in the International Union for Radio Science (URSI) for almost 50 years. He was an Associate Editor and later Editor of “Radio Science” (then an URSI journal) from 1970 to 1979, and Secretary then Chair of USNC/URSI from 1979 through 1984. He was Vice Chair then Chair of URSI Commission B, 1987-1992, and Vice President then President of URSI itself from 1993-1999. He has also served on numerous URSI Committees, and wrote a history of the early years of URSI.

Professor Senior’s devotion to education and his students was recognized through numerous teaching awards, including being named Arthur F. Thurnau Professor, an honor bestowed on the best University educators. He also received the CoE Teaching Excellence Award, the University of Michigan Teaching Excellence Award, the Eta Kappa Nu Award Teacher of the Year Award for two years in a row, and the Tau Beta Pi Outstanding Faculty Award. He chaired more than 20 Ph.D. committees.

It was Tom Senior that initiated St. George’s Day in 1987, a day when the faculty would serve lunch to all EECS students. Images of the faculty marching in a parade wearing their St. George aprons and blowing horns, and most importantly, then serving them, is a favorite memory of many of our alumni.

Professor Senior received numerous awards, including the IEEE Antennas and Propagation Society Distinguished Achievement Award, the URSI van der Pol Gold Medal, and the IEEE Electromagnetics Award, which is the highest technical field award given in this area.

Even just a few days before he passed away, faculty, students and staff were greeting Professor Senior in the hallways of the EECS Building, where he spent significant time documenting the history of the RADLAB and the Department.

He will be deeply missed.

Professor Senior is survived by his four children and their spouses: Margaret and Kevin Thorpe, David and Tawnya Senior, Hazel and Dave Redman, and Peter Senior, and six grandchildren.

The Department of Electrical Engineering and Computer Science: A Brief Overview (1970 – 2010), by Thomas B.A. Senior

The workshop, co-organized by a team including two EECS faculty, focused on ensuring the safety of Level 3 autonomous vehicles, where humans must be ready to take over control.| Short Read