EECS: Computer Science and Engineering
November 22, 2017
The app, developed by a team of UM students through the Multidisciplinary Design Program, traces the historic pilgrimage of 8th century Korean monk Hyecho to provide context for the exhibit.| Short Read
Enlarge 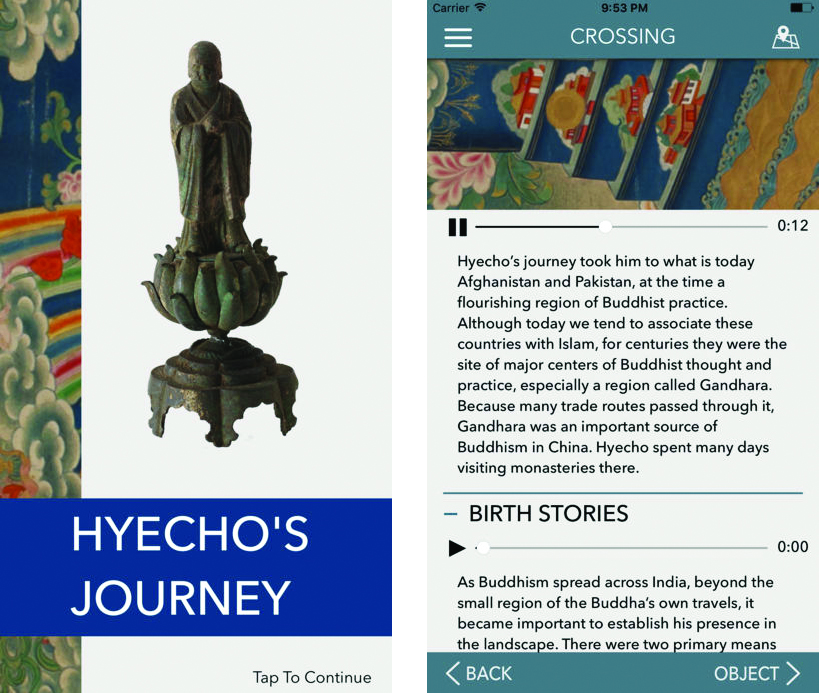 Visitors to the Smithsonian’s Freer|Sackler Galleries in Washington DC will be guided through an exhibit on ancient Asian art by an app developed by a team of UM students through the Multidisciplinary Design Program. The exhibit and app trace the historic pilgrimage of 8th century Korean monk Hyecho to provide context for the exhibit.

Hyecho, at the age of eighteen, set out from China to begin a journey over land and sea that would take him through the Buddhist holy land of India, as far west as Iran, and back to northern China. Many monks did not survive this pilgrimage, and among those who did, none traveled farther than Hyecho.

The app, called Hyecho’s Journey, consists of eight chapters that users can progress through. Each chapter consists of three main parts: Hyecho’s story at that location, information about the item on display, and an interaction or game with the object. The apps allow visitors viewing the exhibition on Buddhist art, entitled “Encountering the Buddha: Art and Practice across Asia”, to learn more about the Buddhist world Hyecho encountered on his pilgrimage.

The app is free and available for iPhone users to download.

The exhibition will run for three years and then it will likely travel to other galleries, including UMMA. The multidisciplinary team will also continue to work on Hyecho’s Journey to produce a book, a new undergraduate course, and a study abroad opportunity.

The competition recognizes the research done by PhD students at CSE and the final competition is the culmination of a process that narrows a field of entrants to a handful of finalists.| Short Read
Researchers