Andrew Farah: the spark behind the Volt 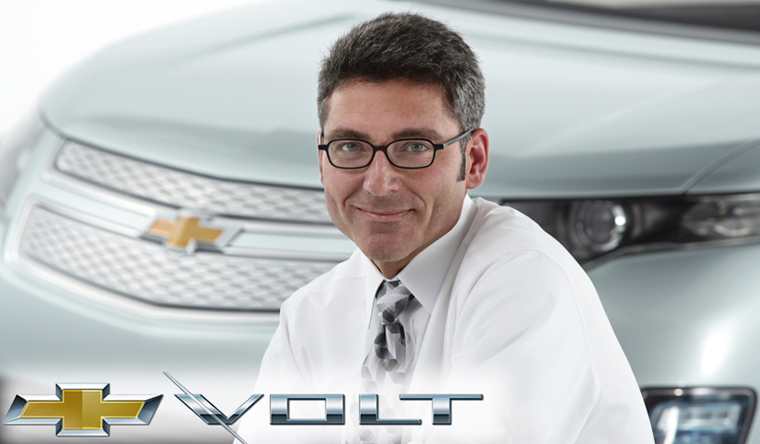 “I’ve always had the opportunity to work on new things,” says Andrew Farah (BSE CE ’82 MSE Electrical Science ’84), Chief Engineer of the Chevrolet Volt, the first extended range electric vehicle from a major automobile manufacturer.
Andrew grew up in Flint, Michigan, an auto hotspot at the time. When it came time to look for an internship as a college student, he selected General Motors (GM); after encouragement from a neighbor who worked there.

Since Andrew knew something about computers he was placed, or stuck as he would put it, in data processing. But in school he was learning more about embedded systems, real time control, and operating systems. He looked across the street from his
GM office and saw where the product engineers worked. That’s where he wanted to be, so he told someone in personnel, “I want to get out of data processing and into embedded systems. I want to get into the product.” It was either that, or he was not coming back for another summer.

By the next summer, he was working on a project that ultimately found life in the 1986 Buick Riviera. This car led the way in some of the newest electronic design features, such as touch sensitive displays and networked embedded computers that talked over a serial data network.

Andrew worked for GM throughout his college years, which he extended into a master’s degree. “I knew if I didn’t do it now
[get a master’s degree], I’d never find the time to go back,” he recalled. After graduation, Andrew was hired as Product Engineer in GM’s Electrical/Electronics Group. It was just in time to help some of the technology he had worked on as a student go into production and sales.

In 1988, Andrew left GM for an opportunity to apply systems engineering to the automotive battery industry. He was Manager of Electrical/Electronic Vehicle Systems Engineering at Johnson Controls, Inc., which is the largest U.S. automotive supplier as well as a diverse Fortune 500 company. It was just the training he needed to be part of the future of electric automobiles.

Eager for additional challenges, he returned to GM in 1991 to help develop the first modern all-electric car. “I was told I was the perfect fit because of my expertise in both embedded systems and batteries,” said Andrew, “so next thing you know I’m back at GM working on the EV1 [GM’s first generation all electric vehicle] managing the group responsible for propulsion software and controls.”

The EV1 incorporated a completely new battery management system, a new propulsion system and microprocessor-controlled brake-by-wire, all novel and in some cases groundbreaking design features. He built his team from scratch with new processes and procedures, some of which are still in use today.

This all-electric car, considered the first from a modern U.S. automaker, reached an early demise in 1999. “From a market perspective,” mused Andrew, “it was probably an idea before its time.” The car had limited range, only seated two, and had a look that did not have mass appeal. It just did not meet enough peoples’ daily needs.

Then came the Volt. A fix for limited range, it is an extended range electric vehicle that offers inexpensive all-electric mileage for daily commuting trips, but also a regular combustion engine for uninterrupted longer trips.

“I don’t want to work on that,” said Andrew when first asked to run the team as chief engineer. At the time he was working as GM Europe Director, Aftersales Engineering in Rüsselsheim, Germany. He felt burned by the EV1 experience and questioned whether GM had the commitment to stick with this completely new vehicle long term. But he was assured by management, and now affirms that, “through all the different things that happened, including the bankruptcy, the commitment was always there and we got the Volt to market on time.”

The Volt has more competition in the marketplace now, but continues to excel. “It really shines for people like me,” said Andrew, “I drive about 30 miles to work and back. On a typical week, I don’t use gasoline at all. Then when I drive to Ann Arbor to go to a football game, it’s not like I need to look for a place to plug in once I get there. My only concern is finding a parking spot.”

The 2013 and 2014 Volt allows the driver to select when to use the battery so it’s potentially not all used on the highway, holding it in reserve for city driving where electric driving has greater benefit. Andrew believes the Volt delivers on everything that a current electric vehicle can offer, including cutting-edge electronic sophistication and excellent overall drivability. Those who have reviewed the car seem to agree. The Volt also comes with the largest government tax credit on the market.

“I’m working on the next Volt,” said Andrew, “and I’ll leave it up to your imagination as to the areas we’re working on.”

Opportunities for EECS Students in the Auto Industry: “Limitless,” said Andrew. “There are opportunities on both the product and manufacturing side. On the product side, vehicles are becoming so complex, the problem is becoming how to simplify them while offering all the features expected by customers. There are lots of opportunities for people who understand the electronics side of automobiles, and even more for those who understand how the entire system works.”

International Experience: “Learning can take place at any time,” said Andrew. “If you can get that cultural learning and maybe some language skills before you start your formal career, it could make it easier to make that leap very early in your professional career. And as a student you can take a little more risk, you have a distinct beginning and end, which isn’t necessarily the case in a full-time job.”

The Michigan Experience: “Michigan did well by me,” said Andrew. “But I always like to tell people who go off to college at Michigan or anywhere else, you get out of it what you put into it. And that’s critical.” Andrew was a member of the student chapter of SAE. He participated in the Career Fair and received several job offers, choosing to return to GM. For fun, he played ice hockey. He enjoyed it so much that after playing with friends, he’d stick around and referee other games.

Favorite Non-work Activities: “There are a lot of them!” said Andrew. There’s still his beloved ice hockey, but topping the list is playing with his two children. They were all back in town recently to watch the women’s gymnastics team, and they took the opportunity to walk around campus. “They got tired of me reminiscing after a while,” he laughed. Also, they have a go kart, like he did when he was a kid, but this one is for his kids… and yes, it’s electric!

Andrew Farah returned to Michigan as the recipient of the 2017 ECE Alumni Merit Award. He gave the talk, Evolution of a Career, Computers, and Cars: 40 Years of Change, on October 27, 2017 during Homecoming.