by Ben Logan
October 6, 2017
It’s the day before pole placement is determined for the start of the race. Go inside the team’s garage and meet the drivers.| Medium Read
Enlarge 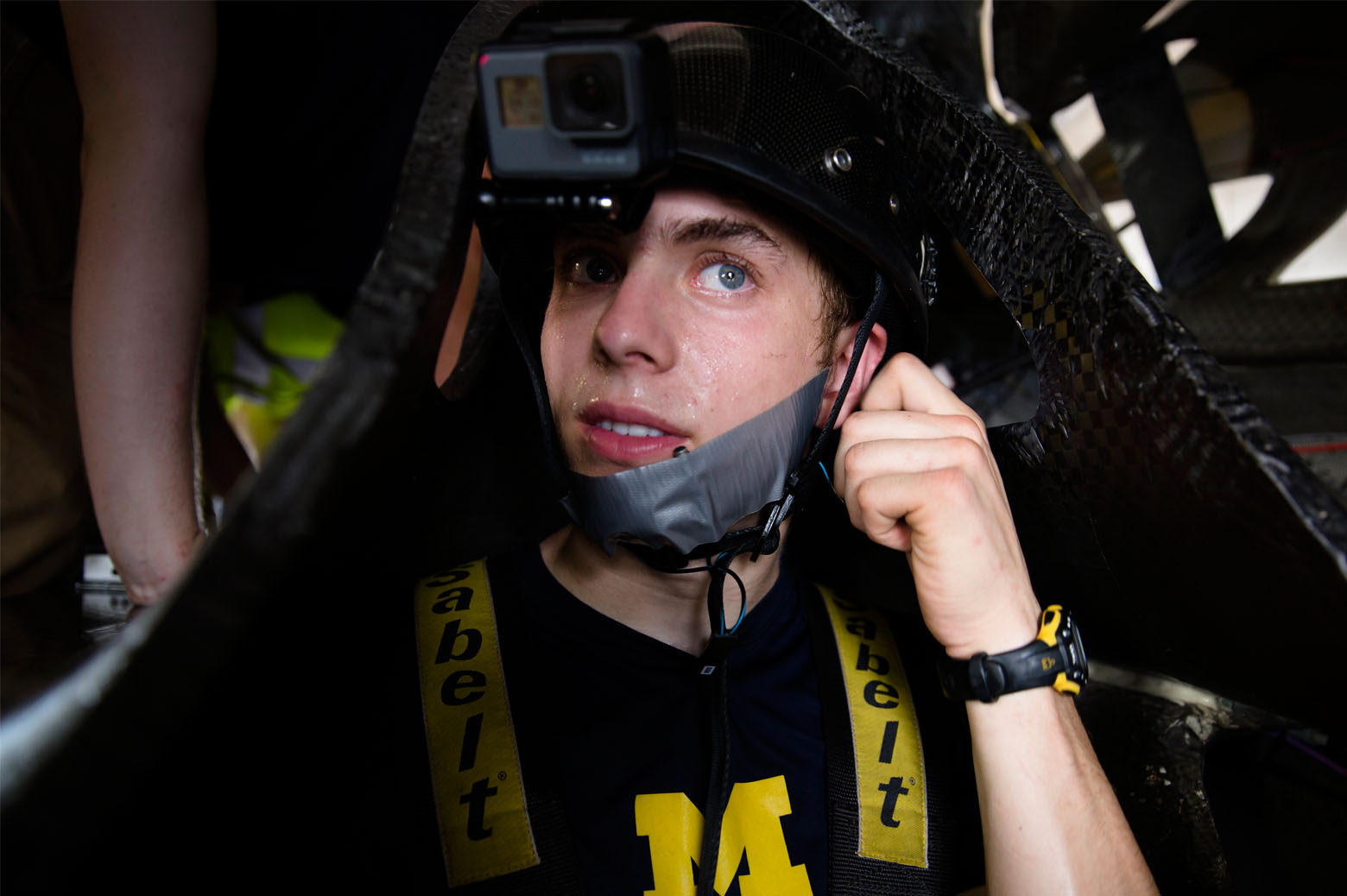 At 9:30 a.m., the humid air was already eighty-six degrees as Novum rolled onto the track at Darwin’s Hidden Valley Motor Sports Complex. The sun radiated off the black asphalt making the morning that much stickier for everyone – especially for Nate Silverman in the driver’s seat. 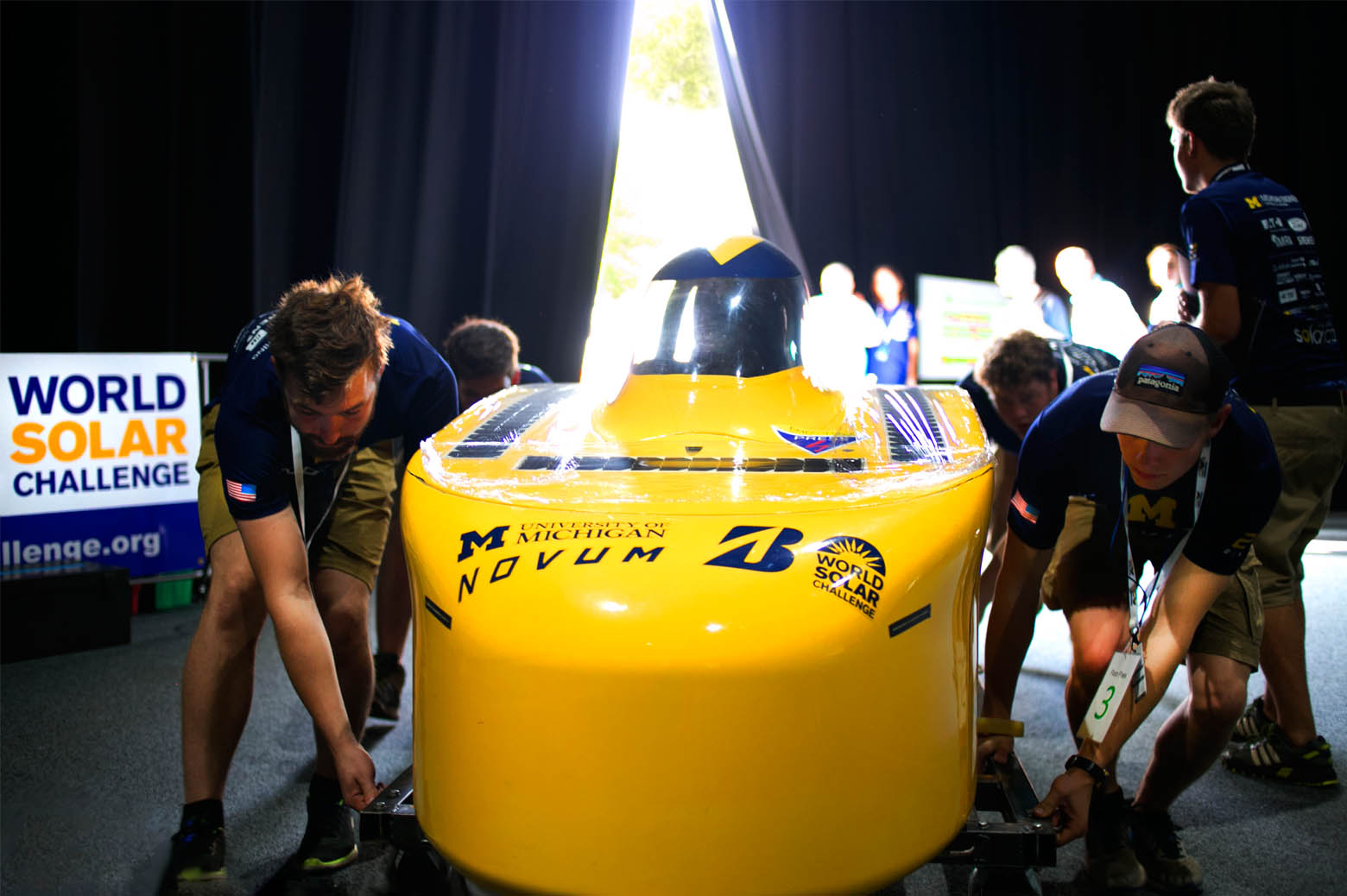 Having passed all the required regulations and safety testing (scrutineering) in two days, the plan was to use today as a bonus opportunity – to get Novum out for two practice circuits before tomorrow’s ‘hot lap’ competition, which determines the team’s starting position in the race.

At the end of the first circuit, Silverman pulled back into pit row and into the team’s garage. “We’ve never put a thermometer in the car, but it’s probably about 120 degrees in there right now,” says Silverman as sweat drips off his face. “You can feel the heat get sucked out when they lift up the canopy after a drive. Still, Novum is pretty comfortable. We have a big seat cushion and we sit with our legs flat, which is pretty unusual for a solar car.”

Comfort-level aside, driving on the track is very different than through the Outback. Nate Silverman and Chae Woo Lim are this year’s primary drivers, with Caroline Subramoney ready as backup. Each have different coping mechanisms to deal with the physical and mental abuse that comes with the long hours and dangers along the Stuart Highway.

“On the first day of mock race I was driving and saw an Emu on the side of the road, and it started running toward me,” says Silverman. “It ran between the solar car and the chase vehicle, which had to slam on the breaks. That was my introduction to Australia.”

Besides the unpredictable wildlife, road trains of semi-trucks and cross winds are what worry drivers most. “You have to keep a calm head, think about what is happening and react appropriately, says Silverman. “If you start to panic, that’s when things can go wrong.” Silverman attributes his background in gymnastics and rock climbing to his cool demeanor under pressure.

As the morning turns to afternoon, clouds roll in. It’s over ninety degrees when the rain starts. It’s now time for the second practice run, but the risk outweighs the opportunity. Engineering director Clayton Dailey anxiously watches the passing weather – counting the minutes. If the team misses their allotted track time, they won’t get another chance to practice before the hot lap. With Silverman already buckled in, there’s nothing to do but wait.

Equally focused and described as the more aggressive driver, Chae Woo Lim channels different traits while driving. “I don’t do any extreme sports,” laughs Lim. “I make my own espresso, cook dinner and listen to jazz. It’s kind of strange that I do this.” Lim admits that it was an early and healthy gaming habit – with a particular interest in racing games that may have influenced his decision to try out as a driver. “The fact that I’m here now, on a racing team, driving a race car that we built – every day is like a dream for me.”

Despite their differences, a deep-felt responsibility to their teammates and confidence in their car is shared by Lim, Silverman and Subramoney.

“The car is handling better than I ever expected,” says Subramoney. “I thought it would be difficult to do the figure-eight and pass road trains, but all those expectations were blown away over mock race.”

IMAGE:  Novum on the track after the rain. Photo: Evan Dougherty, Michigan Engineeing

The rain passed with enough time to get back on the track for the second run. Novum completed a few more passes on the wet raceway. The value in practicing in those conditions wasn’t lost on the team. Tomorrow’s forecast calls for rain.

Related Links
Ready to race
The mock race
The Grocers