by Dan Newman
EECS: Electrical and Computer Engineering
September 13, 2017
Keenan Rebara hopes to add to the fun of spinning the Cube using his a bit of physics and sensors.| Short Read
Enlarge 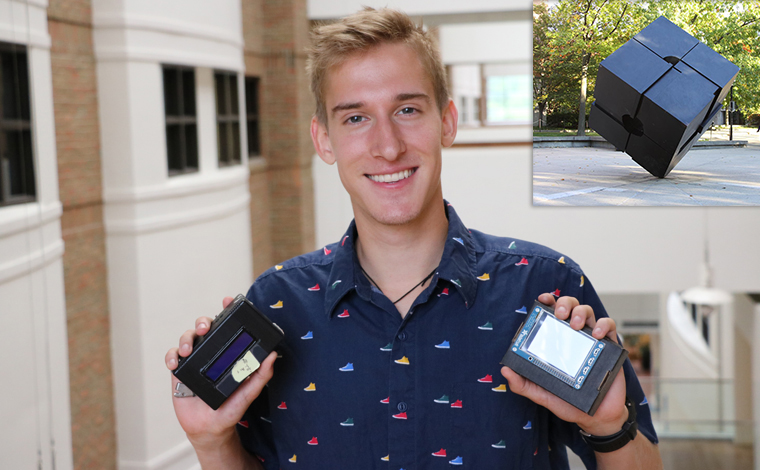 CE junior Keenan Rebera wants to make the Michigan Union’s famous Cube sculpture even more interesting – with the power of technology. The spinning metal art installation nestled on central campus draws a lot of curious eyes, but Rebera thinks he can take the experience to the next level.

Rebera has designed a small sensor array and display device that attaches magnetically to the Cube. When active, it can detect the velocity of the Cube when a person spins it and generate any number of fun factoids to show off. How fast did you just spin this thing? How many times has it been spun today? If The Cube were a generator, how much power would it be producing right now?

The project, funded by an Arts Engin micro-grant, is a continuation of Rebera’s honors physics project, which had him developing the math behind these metrics. After he had that figured out, he built a simple prototype on his own for fun. That first attempt ended in a burned out circuit board (something Rebera attributes to a freshman mistake), but the idea stuck in his head. 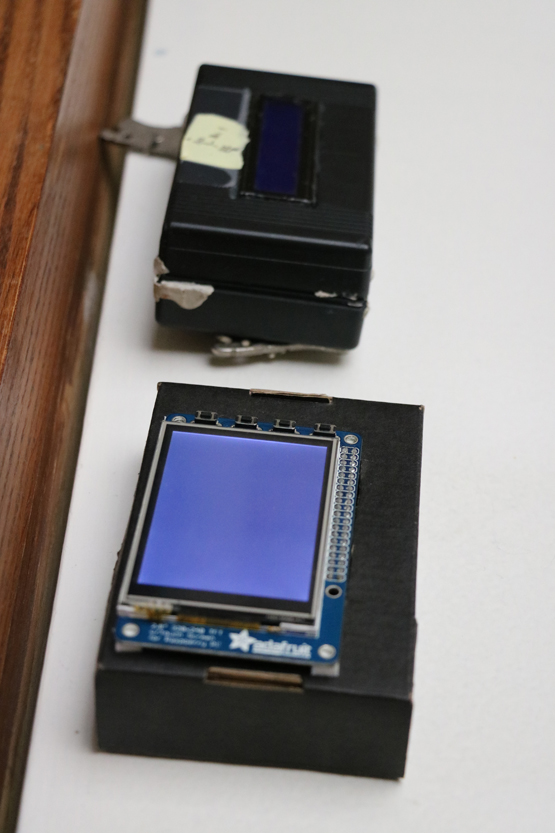 IMAGE:  Keenan Rebera's sensor device (background) and its display (foreground) will show fun facts about The Cube when people spin it.

“There’s something inherently fascinating about a big, spinny cube,” Rebera says. “I see kids spinning it around, and I would love for them to be able to see how fast it’s moving or say they broke the high score that day, really bring in that extra level of interactivity that is kind of a trademark of Michigan.”

The device is meant to be easy for others to construct – all sensors and components are available on the market, and the casing was 3D printed. The sensor array is a full computer, so more metrics can be added easily. The display component runs a localized web application, essentially displaying the information as a web page. Two buttons on the side will allow users to scroll through the different data.

Currently, the device is meant to serve as a proof of concept – something Rebera’s Arts Engin adviser called “guerrilla art.” For its big unveiling, Rebera plans to toss it on the Cube for a couple hours to show how it works.

This project represents a lot of what Rebera loves about computer engineering as a whole.

“There’s something very satisfying making something with your hands, something digital and advanced, and seeing it work,” he says.

A coder from a young age, Rebera realized in high school that he wouldn’t be satisfied just learning that one part of how computers work.

“I’d always have questions if I stayed on one side, I need to know it all,” he says. “I think at some point every kid has the dream of being an inventor. With the recent advances in embedded technology, processors getting smaller, transistor density getting higher, prices going down – people have been enabled to do this kind of thing.”

Rebera hopes to unveil his Cube project some time in the fall semester, before the cold weather hits.