EECS: Computer Science and Engineering
August 18, 2017
"CS and music have been my passions."| Short Read
Enlarge

Chris Salem (BS CS 2017) came to the University of Michigan in Fall 2013 with an electric guitar, a keyboard, and an amp – and with dreams of forming a student rock band. But he quickly discovered that finding bandmates wasn’t easy: many students didn’t bring instruments, and there was no good place on campus that an electric group could practice and play.

Despite this, while crossing the central campus diag one day that Fall, Chris saw – and stopped to listen to – performances by a series of student ensembles. “I knew then,” said Chris, “that somebody else had a passion for live music and was actually able to make this event happen.”

Chris asked questions and learned that a student group called Stamp Nation had organized the event, called “Concert on the Diag.” Formed in 2012 by Omar Hashwi (BBA 2014) and Amrutha Sivakumar (BSE IOE 2016), Stamp Nation was designed as a connector for non-music-major students and it organized twice-a-year diag performances.

Chris joined Stamp Nation that day, excited to finally be part of something that was centered around playing live music. He pushed to expand the impact of Stamp Nation, arranging for weekly student jam sessions and performances at the University’s Canterbury House. Amrutha created Stamp Nation’s “Innovate Music Workshop,” a six-hour immersive event that connects student musicians and introduces them to music and recording industry professionals, during which they can develop musical launch plans. Chris, just entering the Computer Science world, recollects that “the idea was for participants to end the workshop with a start-up idea in the music Industry. It feels like MHacks. 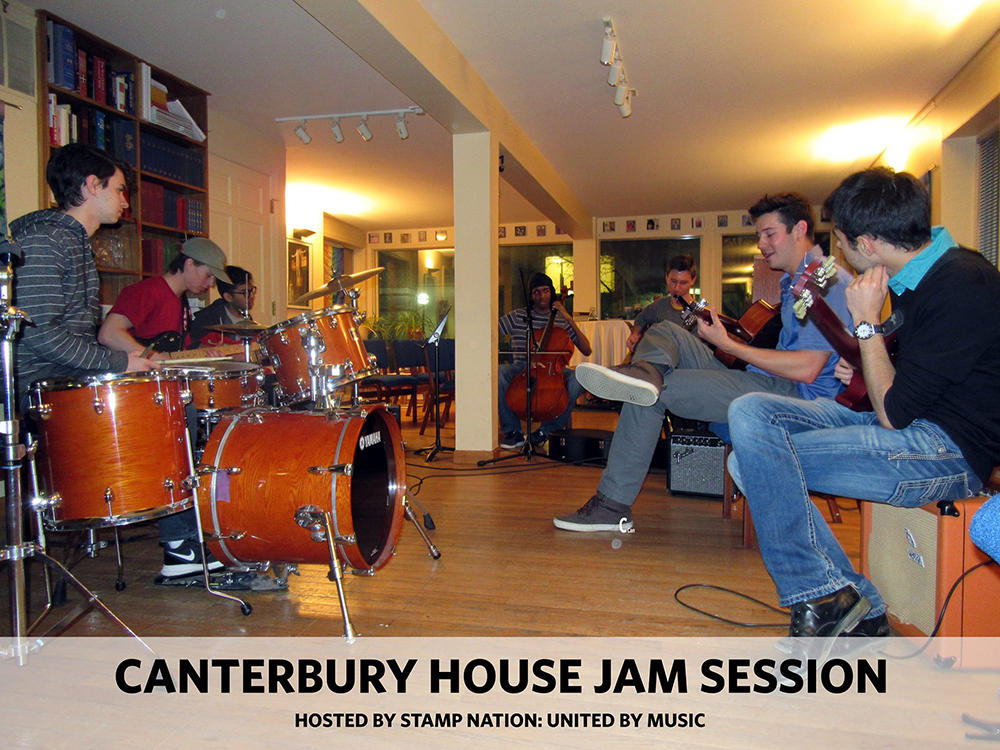 IMAGE:  Students assemble and play together at a Stamp Nation jam session.

Chris became president of Stamp Nation in 2016 after Omar and Amrutha graduated. Since he joined Stamp Nation, Chris’s biggest passion has been to develop what he calls Music House. “Non-athlete students have lots of access to recreational facilities,” says Chris. “But nothing similar exists for student musicians. Our goal is to bring about a facility that provides access to instruments and a creative space for independent student musicians.”

Chris has pursued this idea for the last three years and has gotten input from faculty, staff, and other students, including from VP for Student Life E. Royster Harpster, which he has rolled into a proposal for the UM Campus of the Future initiative. Chris graduated with a degree in CS in Winter 2017, but he continues to work with the new Stamp Nation leaders to design an event to be held at Canterbury House this Fall, which will include performances, jam sessions, and workshops to demonstrate the idea of Music House and to build support for his proposal, which he hopes will be funded under the Campus of the Future initiative.

“CS and music have been my passions,” states Chris. “I’ve been very fortunate to have been associated with the CS program at Michigan; the computational thinking and engaging community that characterizes the CSE department has been an essential foundation for me in building Stamp Nation and advocating for Music House. It’s really been a process, and I hope it’s one that will benefit future students.”