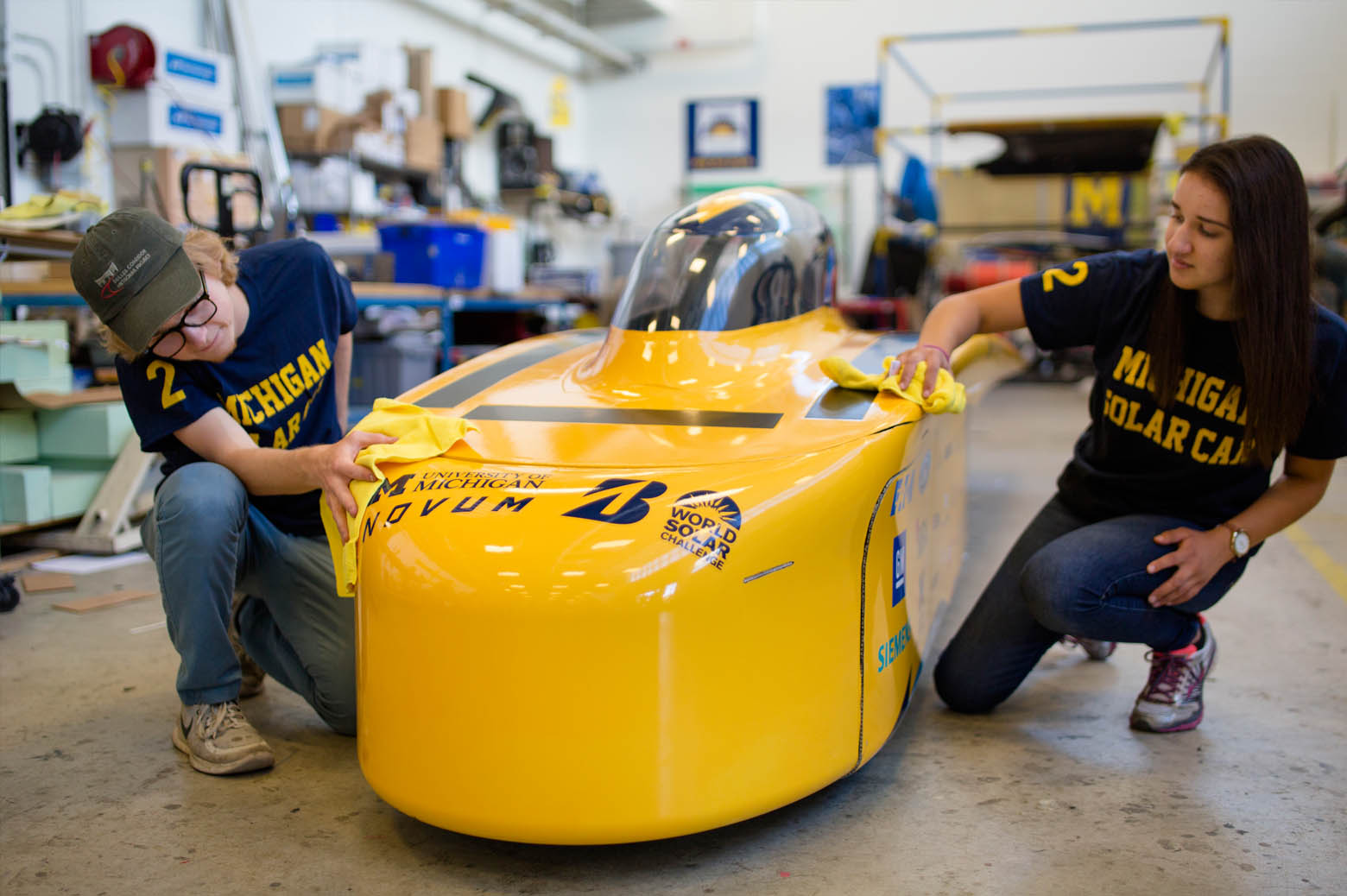 The University of Michigan’s top-ranked solar car team has unveiled the vehicle it will race in a global contest this fall, and it’s the smallest and most aerodynamic that any U-M team has ever built.

Aptly named Novum–Latin for ‘new thing’–the design, manufacturing process and solar technology behind the national champion team’s fourteenth car is different than anything they’ve ever done before.

Measuring just over one meter shoulder to shoulder, Novum is roughly 43 percent narrower than the team’s last vehicle, Aurum. And according to experimental simulation data, it’s roughly 20 percent more efficient.

Today, at the Michigan Theater, the team introduced Novum to the public – showcasing the vehicle they will race across Australia in the 2017 Bridgestone World Solar Challenge.

In October, the team’s seventeen-member race crew will take Novum 1,800 miles across the Australian Outback in an eight-day endurance contest that takes place every two years. U-M’s team has finished third in the world race five times in its 27-year history. It has won the comparable American race nine times – and won the Abu Dhabi Solar Challenge in 2015.

The last World Solar Challenge, in 2015, ended with the closest finish in the race’s history. The top five teams completed the course within 80 minutes of one another. Michigan hung onto third place until the last 30 miles.

“There are two ways to improve. You either refine an iteration of a previous design or you change something drastically,” said Clayton Dailey, the team’s engineering director and a senior studying mechanical engineering. “This year we’re going for a drastic change.” 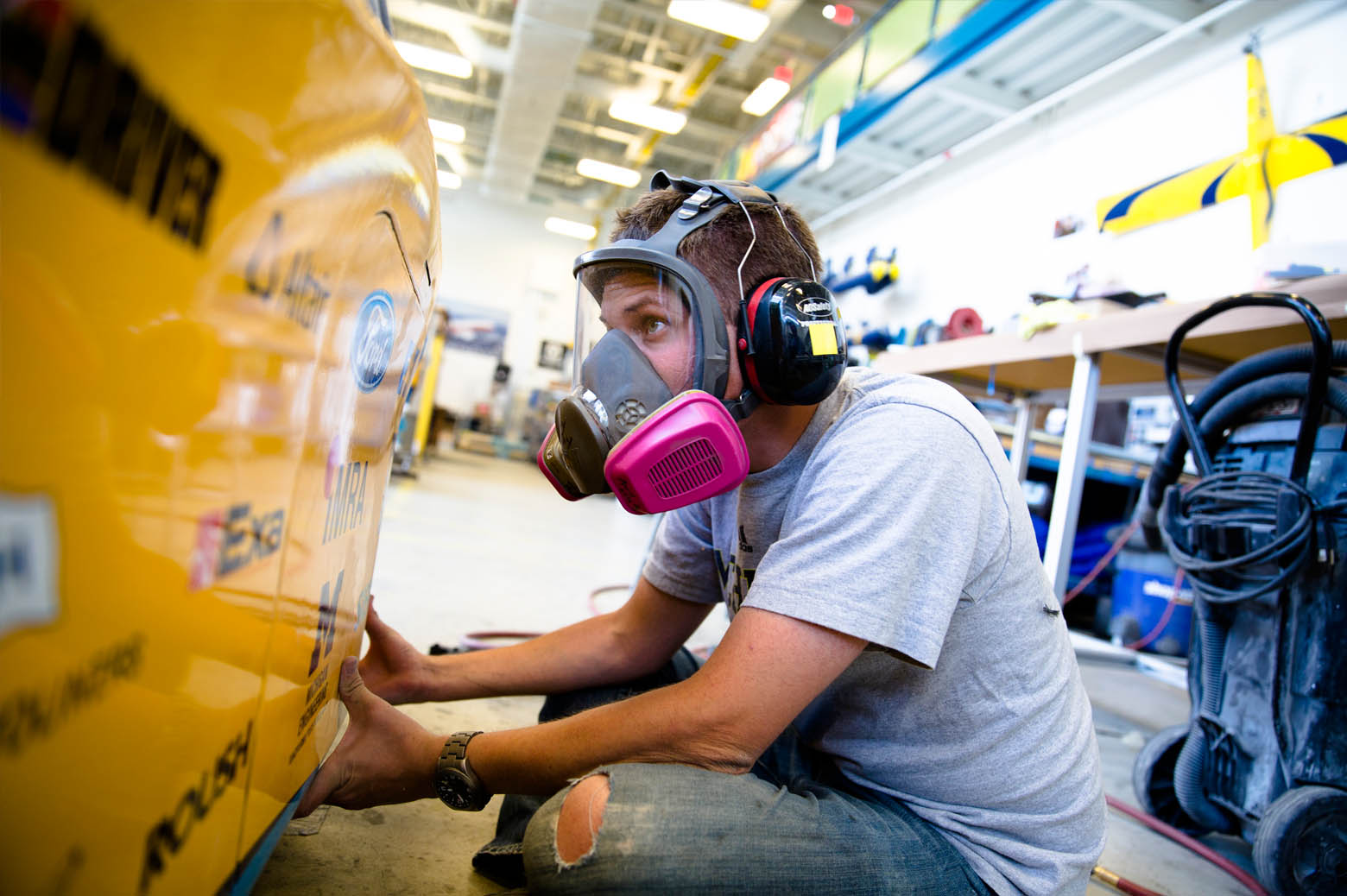 The team had considered building a small car in the past, but the true potential came into focus after two variables aligned.

Second, the team was able to secure high-tech, “multijunction” gallium arsenide solar cells, which are roughly 35 percent efficient, compared to silicon cells’ 20 percent. The last three U-M solar cars have been powered by silicon, but in fact all others used gallium-based arrays – ranging in junction variety and efficiency.

In the eight years since the last gallium arrays, the technology has rapidly evolved, whereas silicon has plateaued. Novum’s will be the most advanced gallium cells the team has ever used.

“Flat-panel silicon is basically maxed out in terms of efficiency,” said Rachel S. Goldman, a U-M materials science and engineering professor who works on gallium arsenide cells but is not affiliated with the team. “The cost of silicon isn’t going down and efficiency isn’t going up.” For example, Novum’s gallium array is less than half the size of Aurum’s silicon counterpart, yet the team expects to generate enough energy to maintain average speeds of 50-55 mph in Australia – similar to Aurum’s.

“Going from silicon to multijunction is a big jump in efficiency,” said Eric Brown, the team’s race array engineer and a rising junior studying electrical engineering. “These types of cells are difficult and costly to manufacture and found in places where space is at a premium but you need a lot of energy. So, for example, satellites use them quite a bit.”

“There’s also more freedom to put things in parallel and make different size array modules. There are different things you can do to mitigate losses from curvature and shading that you can’t do with silicon.”

The aerodynamics division began experimenting with the shape of the car. “My teammates and I designed a lot of strange looking cars – all the crazy ideas we thought of trying in the past,” said Jiahong Min, the team’s aerodynamics leader and graduate student studying mechanical engineering. He studied aerospace as an undergrad at Michigan Engineering and joined the team as a junior.

“There was a lot of trial and error, but experiments showed that making it narrower was more efficient than making it shorter.”

By nature, a narrower car is less stable. To ensure it can handle the strong cross winds of the Australian Outback, the team has spent a lot of time refining Novum’s vehicle dynamics. Wind tunnel testing and software simulations check every angle and wind speed they might encounter. The team also built two mule cars for road testing. “All our decisions are based on experiments and testing,” says Min. “We compare and validate as many numbers as we can. We compared that to the previous car, which we drove across Australia in 2015. So, this car has to be as good as the last car. We’ve reached out to our alumni and corporate partners for feedback. All of this together allows the team to be confident that this car will work.”

“The team had to have three things in order to make the switch to the small car,” say Dailey. “The insight, or the idea, the resources, and the willingness to take the risk. We have to be willing to do something that hasn’t been done before – going to the unknown.”

All this effort will culminate in October at the Bridgestone World Solar Challenge, but there’s still a lot of work ahead. The team will spend the summer testing and refining their vehicle and procedures – including a mock race around Michigan’s lower peninsula. They leave for Australia in September.

“I think this race will usher in the next era of solar cars,” Dailey said. “And hopefully we got this right, and are the first to jump on the ship – to a single-fairing, long, skinny car.”