by Hannah McKenley
Michigan Engineering
July 19, 2017
The scholarship supports undergraduate students enrolled full-time in the College of Engineering who are pursuing a degree in Aerospace Engineering.| Short Read
Enlarge 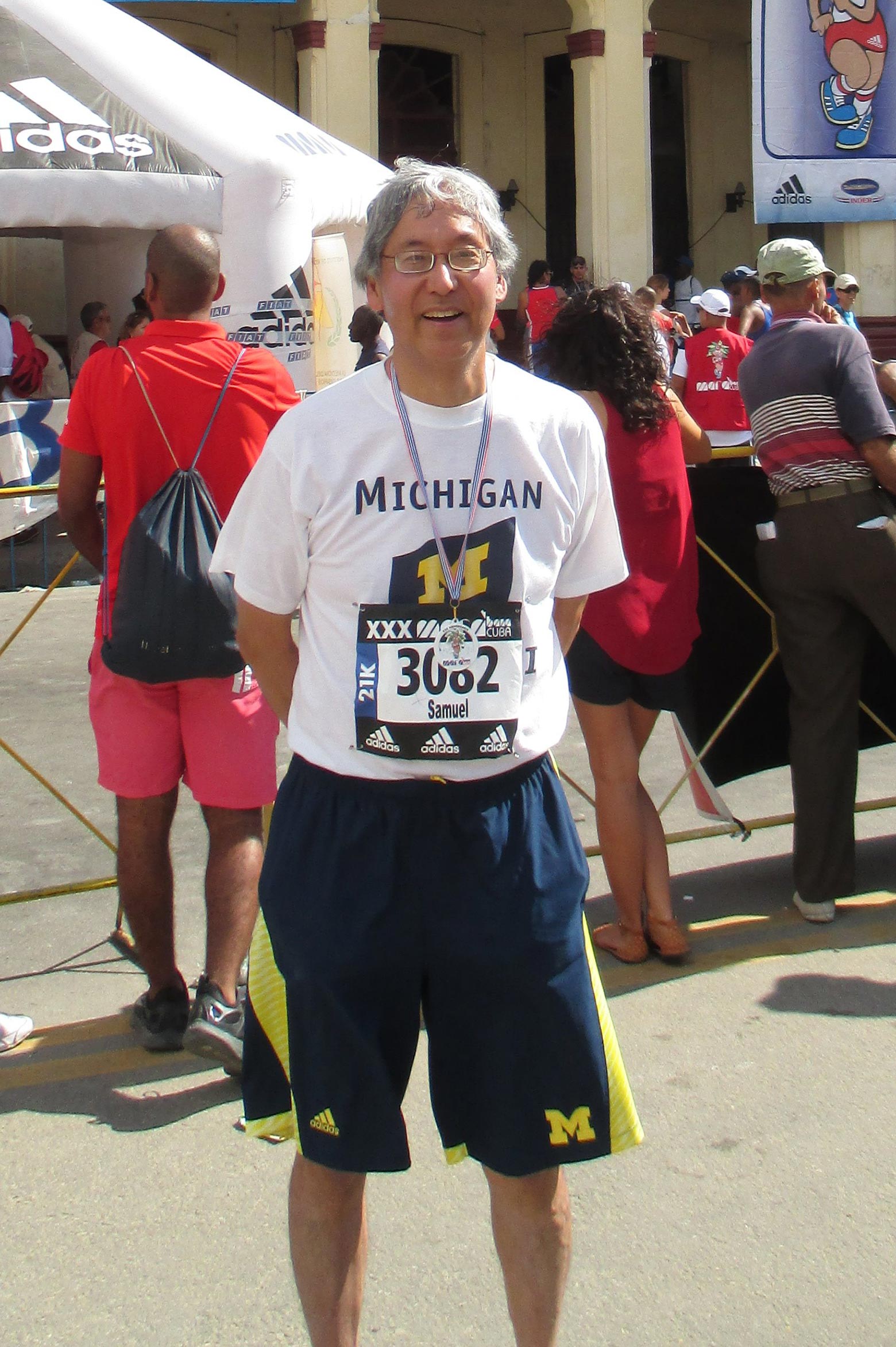 IMAGE:  Samuel Nakamura at a half marathon in Havana, Cuba in November 2016

Samuel Nakamura (BSE Aero ’69, MSE ’70) has provided an additional gift to his endowed scholarship fund, the Samuel Nakamura and Edith R. Carlson Scholarship Fund.  The scholarship supports undergraduate students enrolled full-time in the College of Engineering who are pursuing a degree in the Department of Aerospace Engineering.

While attending the University of Michigan, Samuel Nakamura joined Air Force ROTC, which provided him with scholarship support during the junior and senior years of his undergraduate education. Following his active-duty Air Force service, he earned his MBA degree from Stanford University in 1977. With a keen interest in the airline industry, Mr. Nakamura joined Trans World Airlines (TWA), serving in various marketing, planning, and communications management positions over a twenty-four year career at the airline’s corporate headquarters in New York City and international division headquarters in London, England, until his retirement in 2001. Mr. Nakamura is an avid runner, and maintains a vast airline memorabilia collection at his home. In 2008, he self-published Nurse of Manzanar, which recounts his mother’s experiences as a Japanese-American in a California internment camp after the attack on Pearl Harbor. His additional philanthropic interests include establishing a scholarship in the School of Art at Montana State University in memory of his late wife, folk art woodcarver Edith “Edee” Carlson, a health sciences scholarship in memory of his parents at his mother’s alma mater, Mills College, and support for the Graduate School of Business at Stanford University.

Mr. Nakamura said, “It is my hope that this modest scholarship may assist a student participating in a program with an overseas component. My airline career allowed me to travel to, and work with, people in dozens of countries. Edee served in Colombia with the Peace Corps following her college graduation. She was an avid traveler and photographer, believing that observing animals in the wild helped make her carvings so appealing. We both treasured exposure to different cultures as life-altering experiences. I hope to help future students get a flavor of such experiences as well.”

This fund will provide discretionary support to the chair of the Department of Aerospace Engineering.| Short Read

The Fund will provide support for graduate students in the Department of Aerospace Engineering including, but not limited to, travel expenses, conference fees and experiential learning opportunities.| Short Read