Propulsion compulsion: From Apollo to PEPL to Mars

Alec Gallimore, the Robert J. Vlasic Dean of Engineering, Richard F. and Eleanor A. Towner Professor of Engineering and an Arthur F. Thurnau Professor in the Department of Aerospace Engineering, used to sit with his aunt and watch Star Trek and the movie 2001: A Space Odyssey, imagining himself as the star of his own Sci-Fi movie.

“My mom used to say I used to meditate and dream about these distant voyages in space,” Gallimore says. “She’d say, ‘Come back to me, Alec; now come back to Earth.’”

All these years later, “the notion of people and machines being able to travel beyond the confines of our planet…it’s kind of magical to me, still.” (Gallimore still runs movies – very detailed simulations – of his own lab’s propulsion systems in his head when conducting his research.)

Gallimore received his bachelor’s degree in aeronautical engineering from Rensselaer Polytechnic Institute and his master’s degree and Ph.D. in aerospace engineering from Princeton University. In 1992, Gallimore became a Michigan Engineer, in the department of Aerospace Engineering, and soon after his arrival he launched the Plasmadynamics & Electric Propulsion Laboratory (PEPL).

By the mid-1990s, Gallimore came to a realization.

“I had to make a decision whether to stick with [this academic and research] career – or was I going to pursue my dreams from yesteryear of becoming an astronaut…. I decided that where I was in my life, and where space exploration was at that time…, I didn’t see that in any career as an astronaut we would have the propulsion technology, life support technology, or even the will to go beyond the confines of earth’s orbit….

“So I said to myself, ‘Well, if I can’t go myself, what I could do is dedicate my career to enabling the technology so that maybe somebody who is born thirty years after I was born could have a shot at it.’

“[And] this academia thing seemed to be getting more traction for me.”

In 1961, the Bendix Systems Division of the Bendix Corporation built a large Space Simulation Chamber – one of just a very few in the country at that time – in northeast Ann Arbor, just beyond the boundaries of the University’s then-developing North Campus. The chamber initially facilitated satellite assembly and testing, but other early experiments included investigations into the development of Lunar Rovers (when the chamber floor would be covered in sand for astronaut and rover lunar surface testing), and various other Apollo era research projects.

In 1982 – after the discontinuation of the Apollo program – Bendix donated the chamber to the University. But the facility – whose centerpiece is its Large Vacuum Test Facility (LVTF), a 9-m long and 6-m diameter cylindrical stainless-steel clad vacuum chamber – was essentially lying dormant.

This was why Gallimore came to Michigan in the first place. 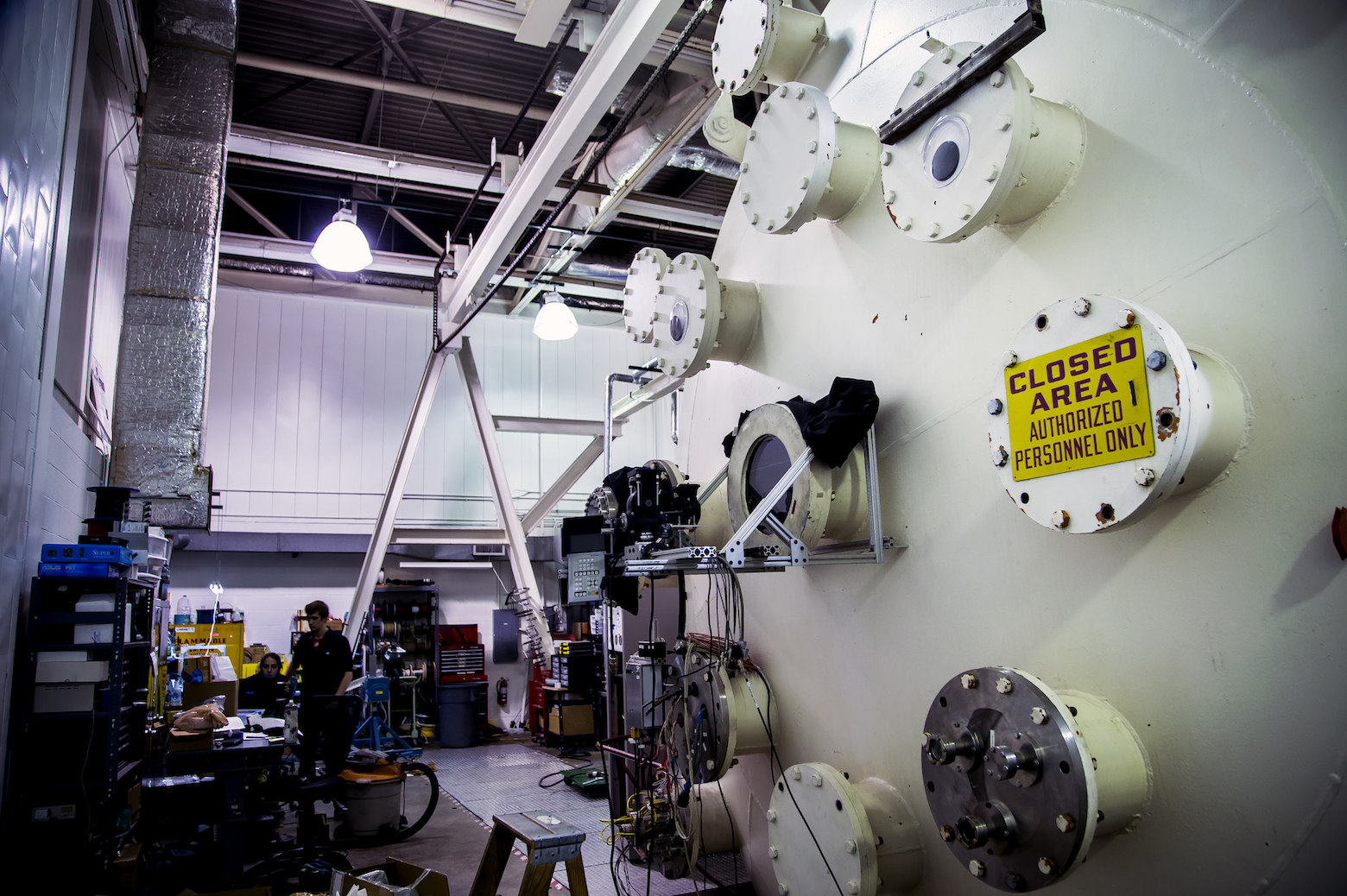 IMAGE:  The chamber that holds the X3 thruster that Gallimore's team has been working on for NASA's NextSTEP program. Photo by Joseph Xu, Michigan Engineering.

“My work depends on my ability to operate plasma thrusters in relevant conditions — a vacuum that simulates space,” Gallimore says. “For that we need vacuum chambers. Michigan offered me a mothballed industrial vacuum chamber that Bendix Corporation built and operated. It was an opportunity to develop a new lab around the largest vacuum chamber at any university – an opportunity I could not pass up.”

Gallimore seized this opportunity, and turned the Bendix apparatus into a state-of-the-art electric propulsion laboratory. PEPL now is one of the world’s leading centers of its kind.

“I’m working on the Hall Thruster [not named after Scott]…with an eye toward a Mars mission,” Hall says. 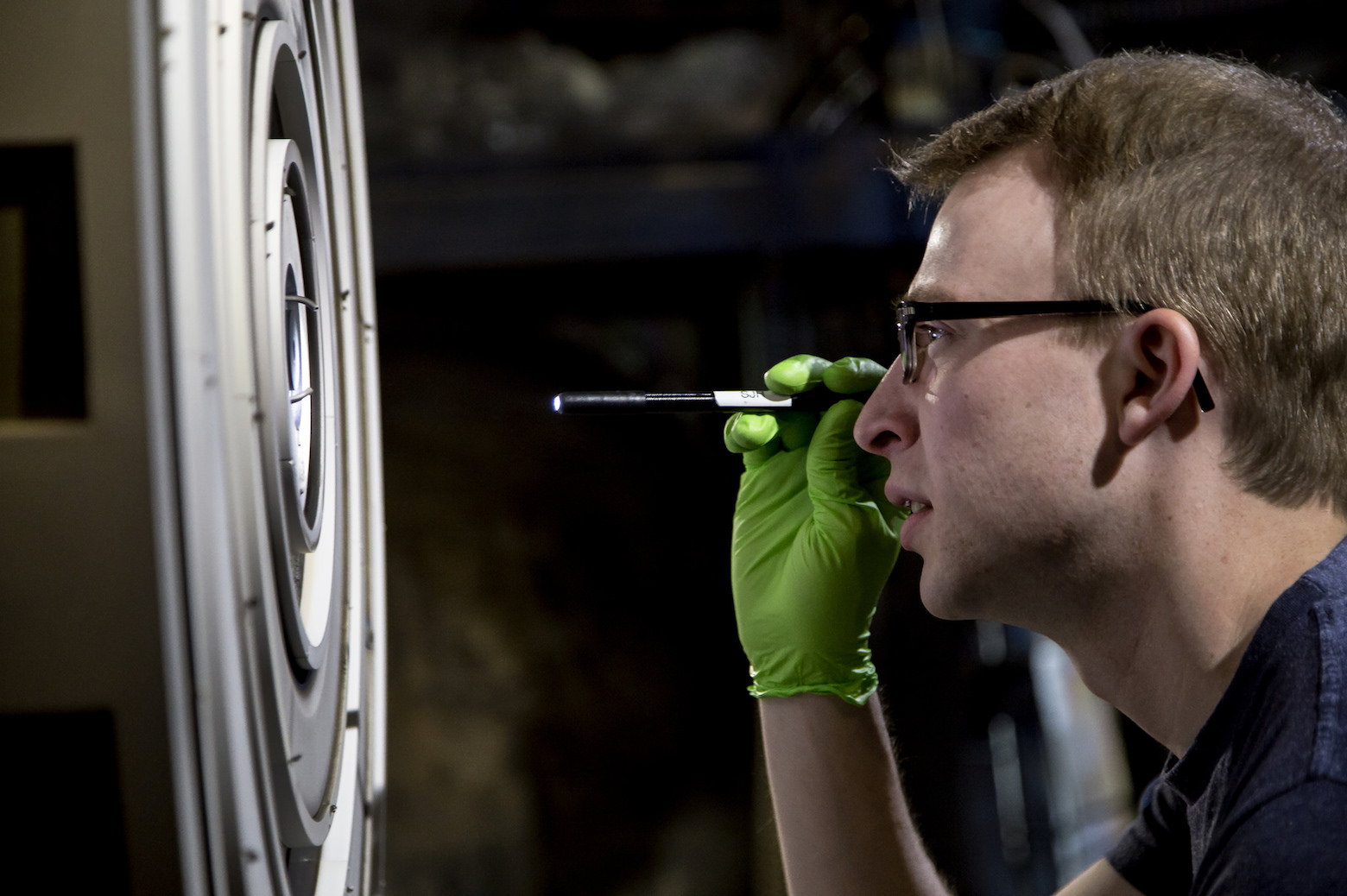 Hall is referring to NASA’s NextSTEP program, which is striving to meet numerous milestones in its quest to send humans into orbit between the Earth and the moon in the 2020s – and then to Mars in the following decade.

In early 2016 NASA awarded $6.5 million to a team that includes use of this PEPL thruster – but it is also competing against two other designs. All three rely on ejecting plasma – an energetic state of matter in which electrons and charged atoms called ions coexist – out the back of the thruster at tremendous velocities.

“Chemical rockets use noxious chemicals to create a massive explosion pointed in one direction — towards the ground — which propels the spaceship in the other direction (upwards to space). Instead of burning things,” Hall explains, “we create a plasma…. We are no longer limited by the energy associated with the chemistry of the propellants. 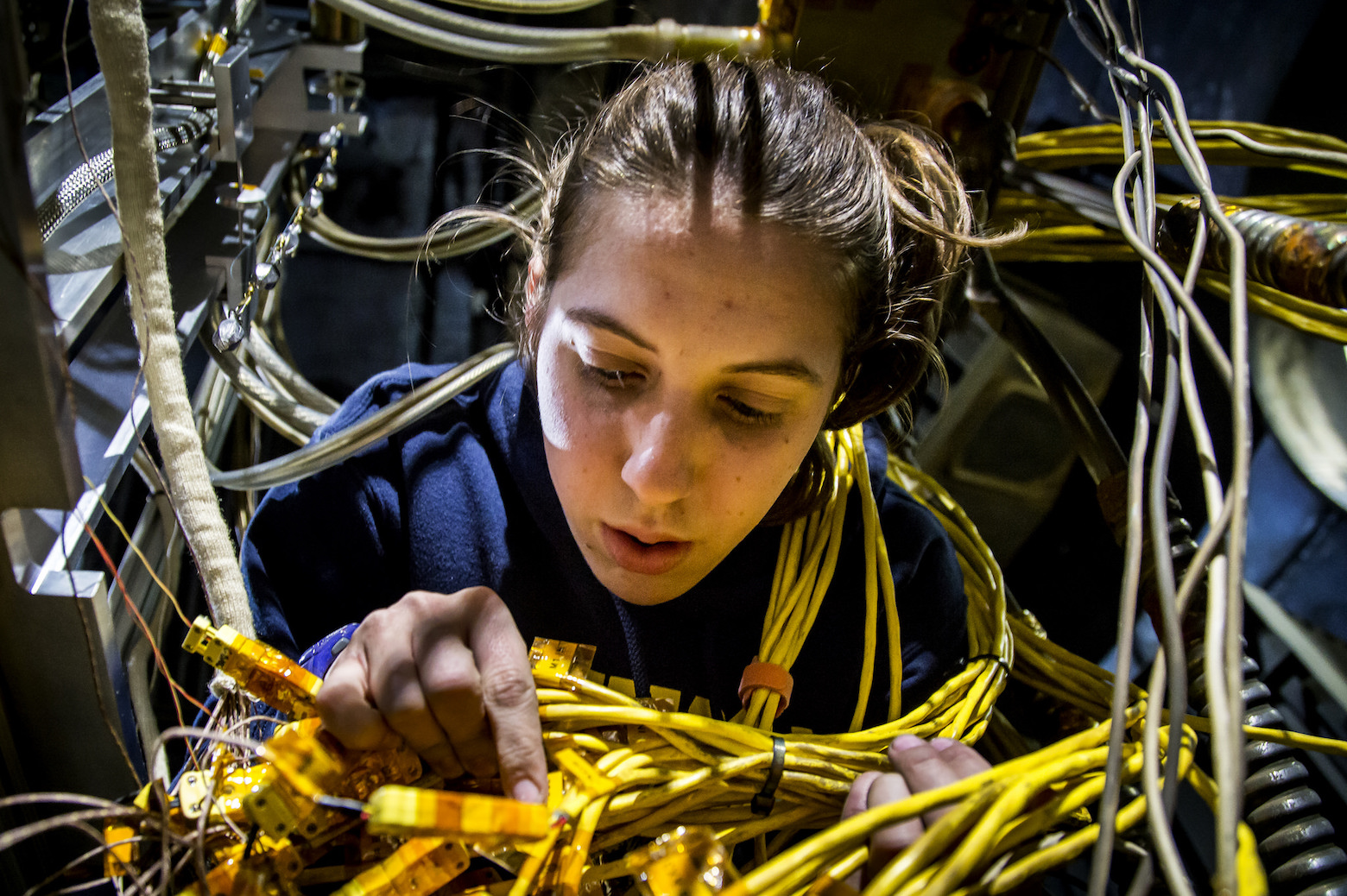 “So instead of burning fuels to create lots of heat and pressure to point out the back of a spacecraft, our type of device uses electrical energy to rip electrons off the propellant. This is a much more efficient process, and our types of thrusters can both accelerate propellant to much higher speeds than chemical rockets can, and can do it much more efficiently.

“The thruster I am working on, in particular, is both high power and based on technology we know works in space. There are other more experimental devices that are also competing to be what NASA chooses for Mars missions, but from a cost and risk perspective, our device has the advantage.”

The Michigan thruster also is relatively smaller and lighter than those offered by its competitors. And the core technology is already in use for maneuvering satellites in orbit around the Earth.

“This work isn’t just theoretical,” Hall adds. “We have real thrusters that we test – full-size and at full power, in space-like conditions, right here in Ann Arbor.

“Dean Gallimore has pushed to make sure we are at the cutting edge,” Hall says. “Our thrusters are bigger and more advanced. You can trace the trajectory [of propulsion history] right to our lab.”

This work isn’t just theoretical. Dean Gallimore has pushed to make sure we are at the cutting edge. You can trace propulsion history right to our lab.

The X3 thruster is the world’s most powerful, and can produce about 20 Newtons of thrust. These highly efficient thrusters can operate for months, if not years, at a time. Based on Gallimore’s and Hall’s calculations, an array of only five or ten next-gen thrusters of this kind would be more than enough to get to Mars and back.

The journal Inside Science recently asked Gallimore and Hall about the viability of the propulsion system used in the 2015 film The Martian, which is based on the “technically brilliant” novel by Andy Weir about an American astronaut who gets stranded on Mars.

“As far as rockets go,” Hall told the journal, the movie’s depiction was “physically plausible,” and Hall and Gallimore both say the film was fairly realistic. 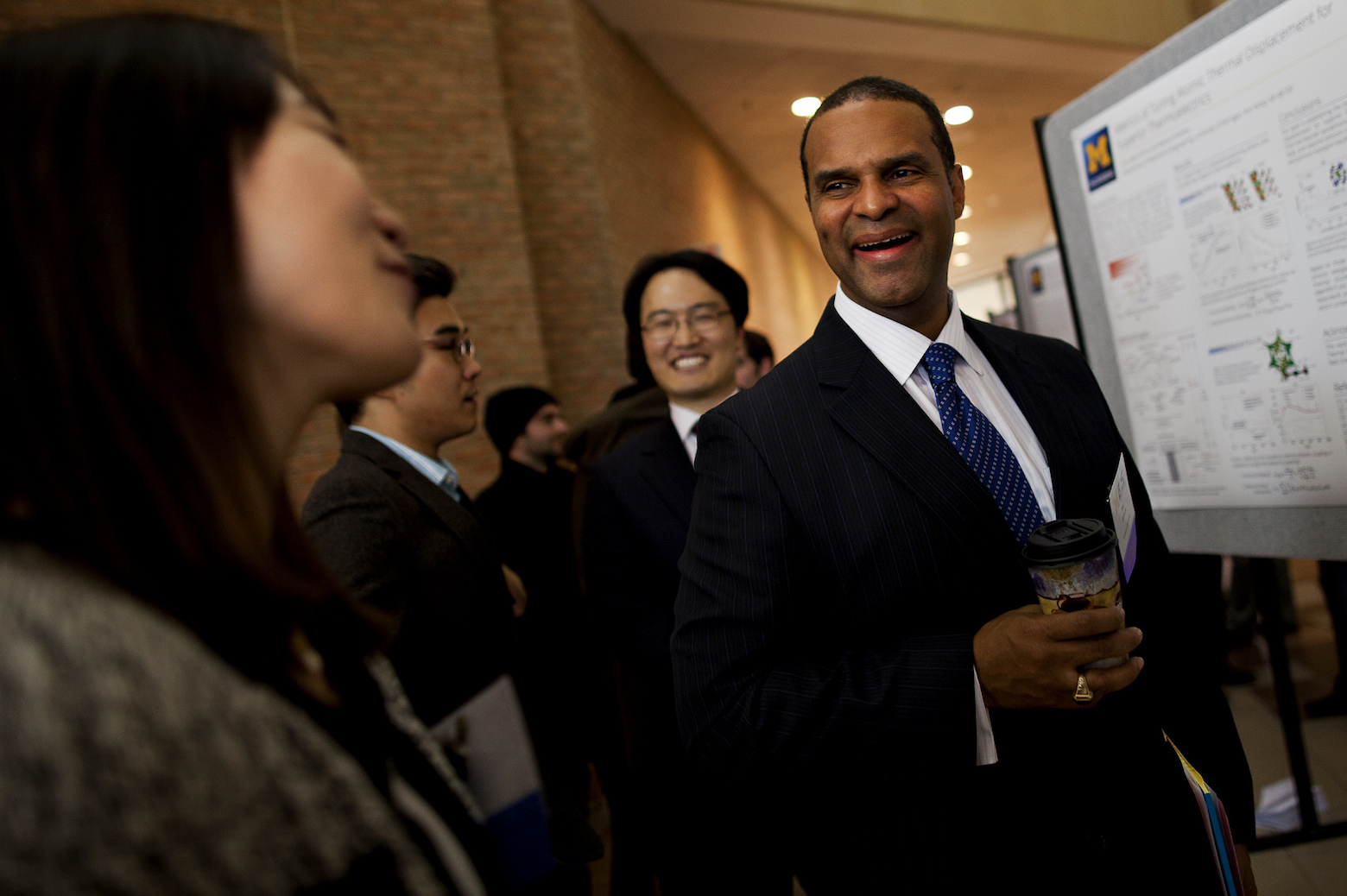 IMAGE:  Alec Gallimore with other "space cadets," celebrating the rocket thruster, designed in his lab, that brings us closer to Mars. Photo by Joseph Xu, Michigan Engineering

“I would love to have [Weir, the filmmaker] come to the lab and just show him that the technology described in the book is real,” Hall says. “It works” – though Hall also says we don’t yet know how to power it. NASA has in fact excluded the nuclear (reactor) option, focusing only on crafts that would use solar-powered systems.

“Science fiction often takes place in the future,” Gallimore says. “And you say, ‘how do you go from where we are to the future?’”

“It definitely seems like electric propulsion is the place to be,” Hall says. “For a long time, electric propulsion was conceived to use nuclear reactors because you couldn’t generate enough solar power. Now there’s a phobia about nuclear power [in space], and solar arrays have become much more efficient at converting sunlight into electricity. Whether we’re exploring the Earth, approaching deep space, taking humans into space, or capturing an asteroid, electric propulsion is a growing field.”

Asteroids contain valuable minerals and water – “stuff” we need if we ever want to live in space, Gallimore says.

“We need rocket propulsion systems to retrieve these materials. We need propulsion experts to enhance our presence in space, “ Gallimore says. “Asteroids might contain all the materials humankind might need to survive in space in the long term.” 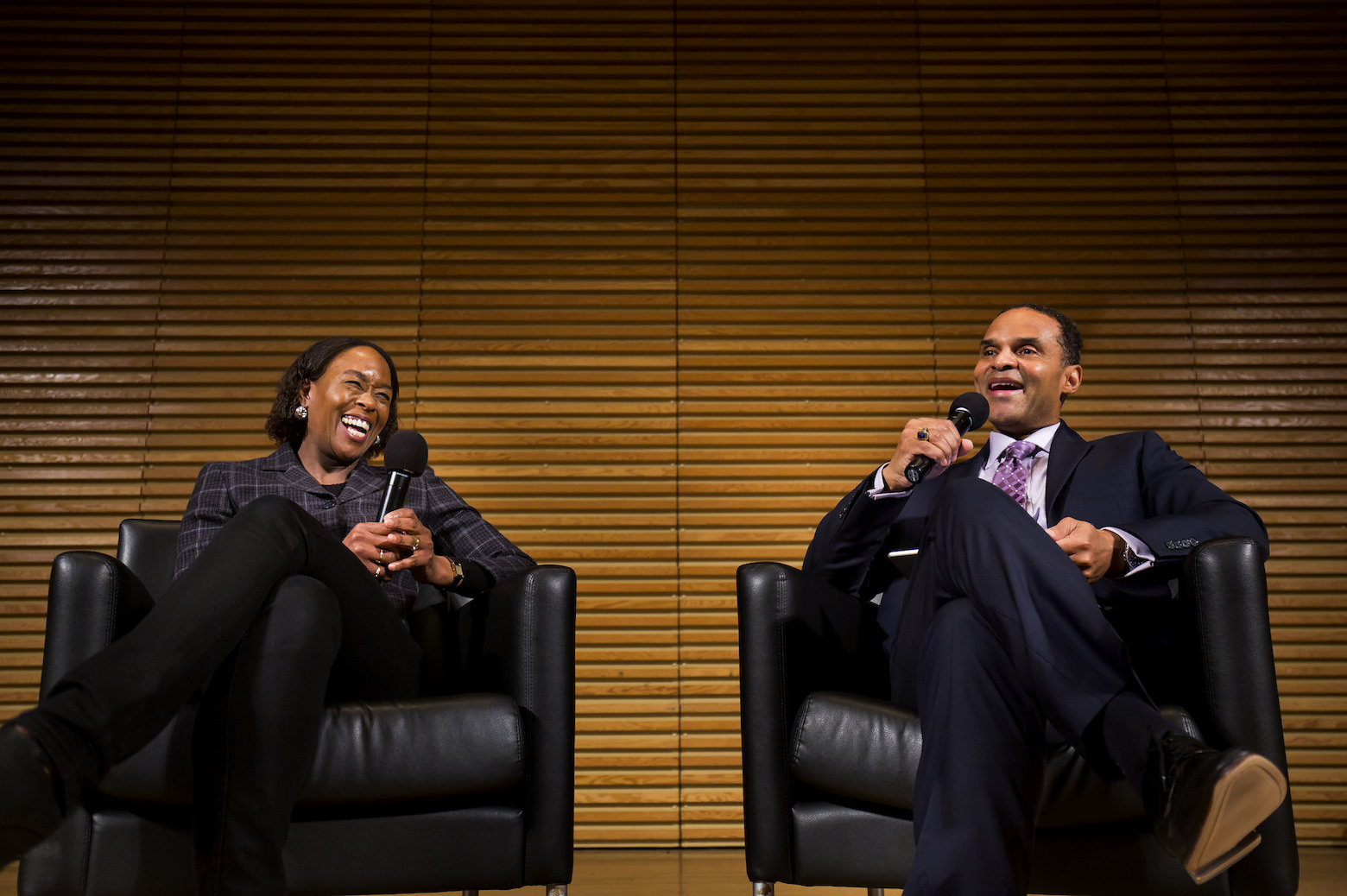 Martin Luther King, Jr. – a man he says is arguably the most influential person of the 20th century – is among  Gallimore’s heroes. As part of the commemoration of Martin Luther King Day in 2016, Gallimore was honored to participate in an on-stage fireside chat with Margot Lee Shetterly, author of Hidden Figures: The American Dream and the Untold Story of the Black Women Mathematicians Who Helped Win the Space Race – a true story set in the segregated 1960s. (It also was made into a film.)

“As much as I enjoyed being with her,” Gallimore says of his time with Shetterly, “I was wondering what she was thinking, having written a book about unsung heroines at a time when they couldn’t even use the restroom in the building they were in…saving the nation’s space program…and knowing they would never get the recognition that was due to them….”

What was it like, Gallimore wondered, “coming to this university she’d written about – one of the suppliers of early African-American talent to NASA and the aerospace sector – talking to an African-American rocket scientist, who is a professor of aerospace engineering, who happens to be dean of this College.

What was it like, coming to this university she’d written about…talking to an African American rocket scientist…who happens to be dean…. She was grinning ear to ear.

“She was just grinning ear to ear,” Gallimore says. “Maybe we have made some progress.”

And while Gallimore may have abandoned his own NASA dream, he’s compensated with his choice of vehicle to propel him to and from work these days.