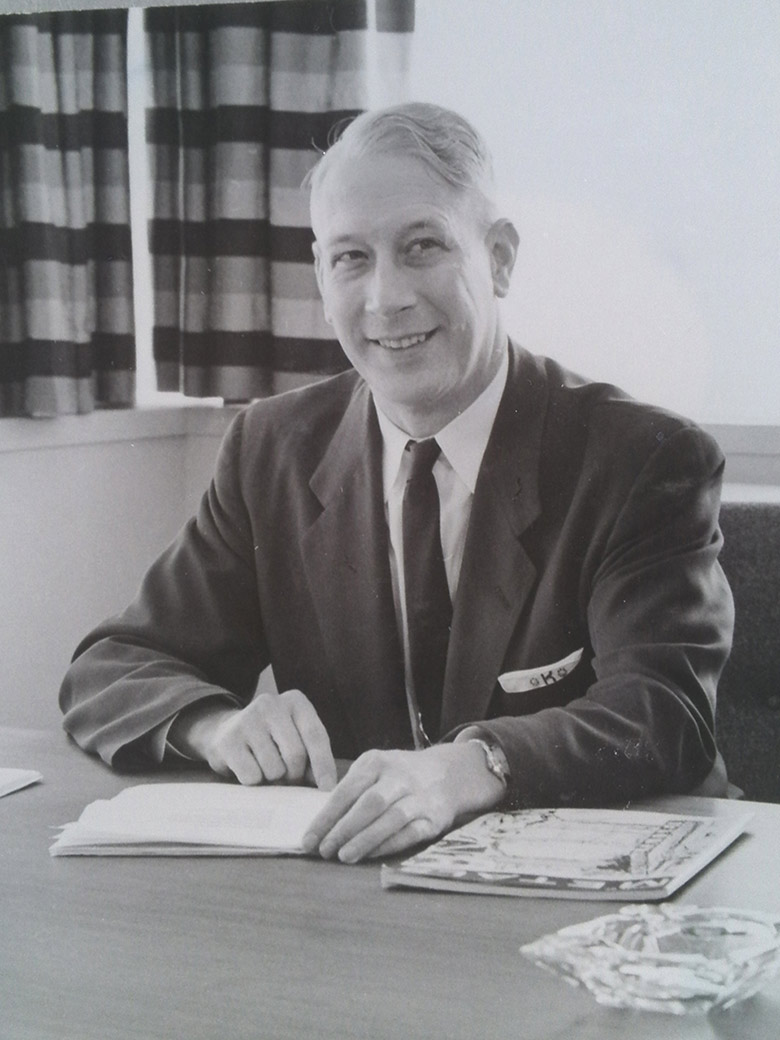 23 year-old Ernest Kirkendall couldn’t have known what was in store for him when he arrived on U-M’s campus in 1934. Having grown up in the leafy Detroit suburb of Highland Park and earned his undergraduate engineering degree at nearby Wayne College, Kirkendall travelled to Ann Arbor to study under renowned Michigan metallurgist Clair Upthegrove.

Little did he know that his doctoral thesis and subsequent research would kick a scientific hornet’s nest—and catapult him into a decade-long battle with the captains of his field. Or that, when the dust cleared, his dogged perseverance would make him a legend, with a metallurgical discovery—one of the most important of the 20th century—named after him: The Kirkendall Effect.

Something odd and unexpected

The commotion began in 1937, when Kirkendall noticed something odd during his thesis research into the diffusion of solid metals. Metals placed together diffuse into each other—much as a drop of food coloring dissolves in water, but much more slowly. This had been documented since at least 1896, but there had been surprisingly little research into precisely how it happened. Kirkendall was looking for answers, layering bars of copper and brass together and heating them in a furnace to speed diffusion and examining the results.

Peering through an optical microscope, Kirkendall saw something he hadn’t expected.

Peering through an optical microscope, Kirkendall saw something he hadn’t expected: after diffusion had taken place, the border between the brass and copper had moved; the brass layer grew while the copper layer shrunk. The movement of the boundary seemed to suggest that the two metals were not diffusing into each other at the same rate.

Upthegrove, Kirkendall’s thesis advisor, assured him that this was not possible. It was common knowledge that metals diffused together in a tit-for-tat exchange of atoms called an exchange mechanism: one atom of zinc switching places with one atom of copper. The theory had been agreed upon by an army of respected metallurgists, including the formidable R.F. Mehl of Carnegie University, the metallurgy capital of the world. Surely, Upthegrove argued, the results were due to a defect in the samples used in the experiment, or perhaps volume differences between the two metals. In any case, suggesting a new mechanism of diffusion was foolish—and it would get Kirkendall’s thesis rejected. 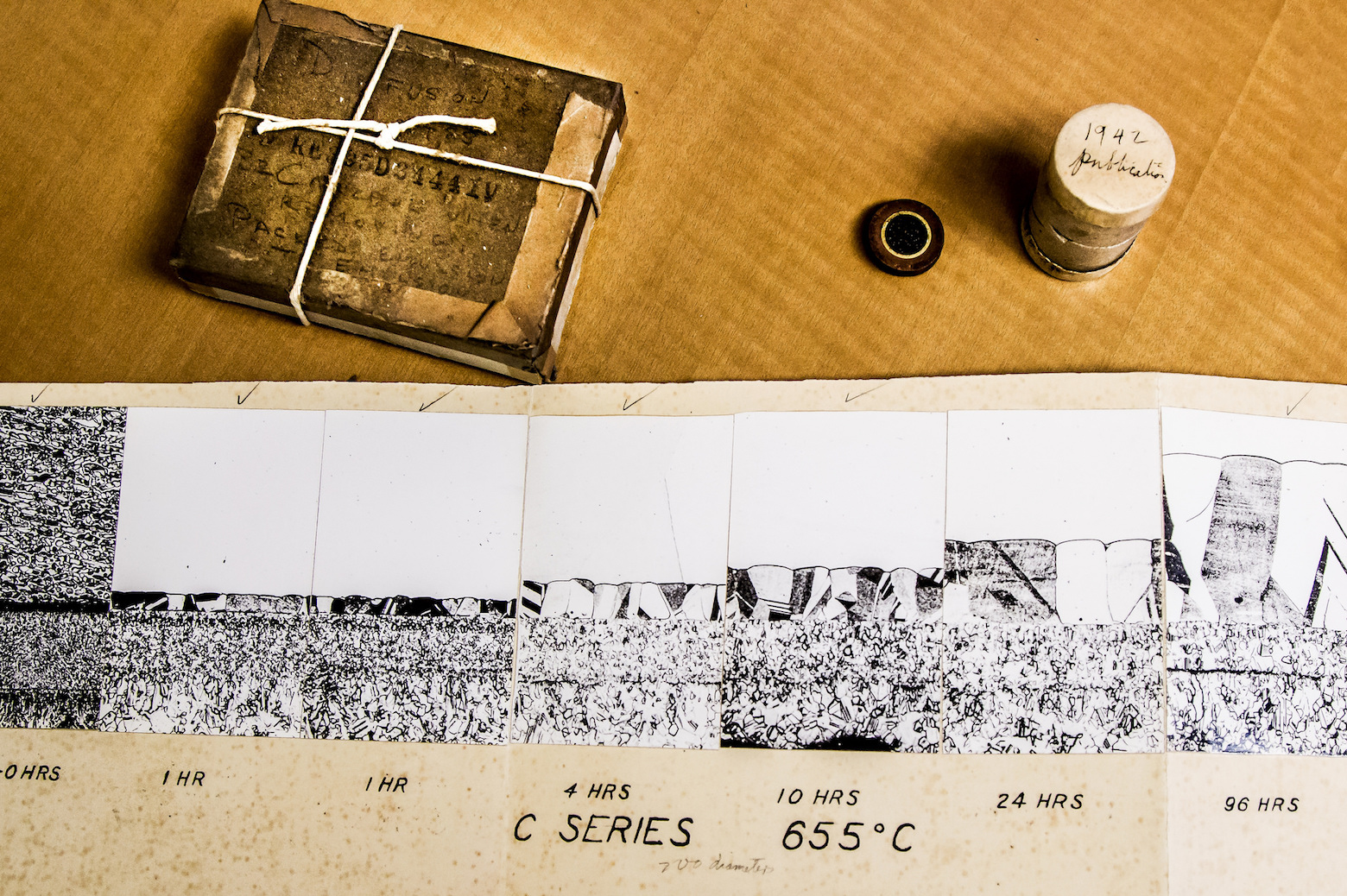 IMAGE:  Research and presentation materials from Ernest Kirkendall’s 1942 diffusion paper, donated to U-M by the Kirkendall family. Clockwise from top left: Lantern slides used with Kirkendall’s paper presentation, a brass and copper diffusion couple used in the experiments and metallograph images that show the diffusion of the two metals over time. Photo by Joseph Xu/Michigan Engineering Senior Producer, University of Michigan

Kirkendall relented, successfully completing his thesis and earning his D.Sc. in 1938. But he continued to examine the long-held theory of diffusion by an exchange mechanism. When he looked into it further, he found that it was based mostly on conjecture, with surprisingly little empirical research.

So Kirkendall decided to look into it himself. He had taken a position at Wayne University in Detroit, which had only recently been promoted from college to university status. Wayne had very limited equipment at the time, so Kirkendall made his own, including an X-ray machine he built from plans he borrowed from a friend at Ford Motor Company. This time he used discs of copper and brass, and again he noted that the boundary between the two metals moved during diffusion. This time, he made careful calculations showing that the movement of the boundary could not be due to volume differences alone.

Published in 1942, this paper directly contradicted the widely held theory that metals diffused together by an exchange mechanism. Kirkendall suggested instead a vacancy mechanism where atoms from one metal switch places with vacancies in the lattice structure of the other. Thus, different metals diffuse at different rates because of their different structures.

But something else happened in 1942: The United States’ entry into World War II. War-related research overtook the scientific community and Kirkendall’s diffusion research was all but forgotten. 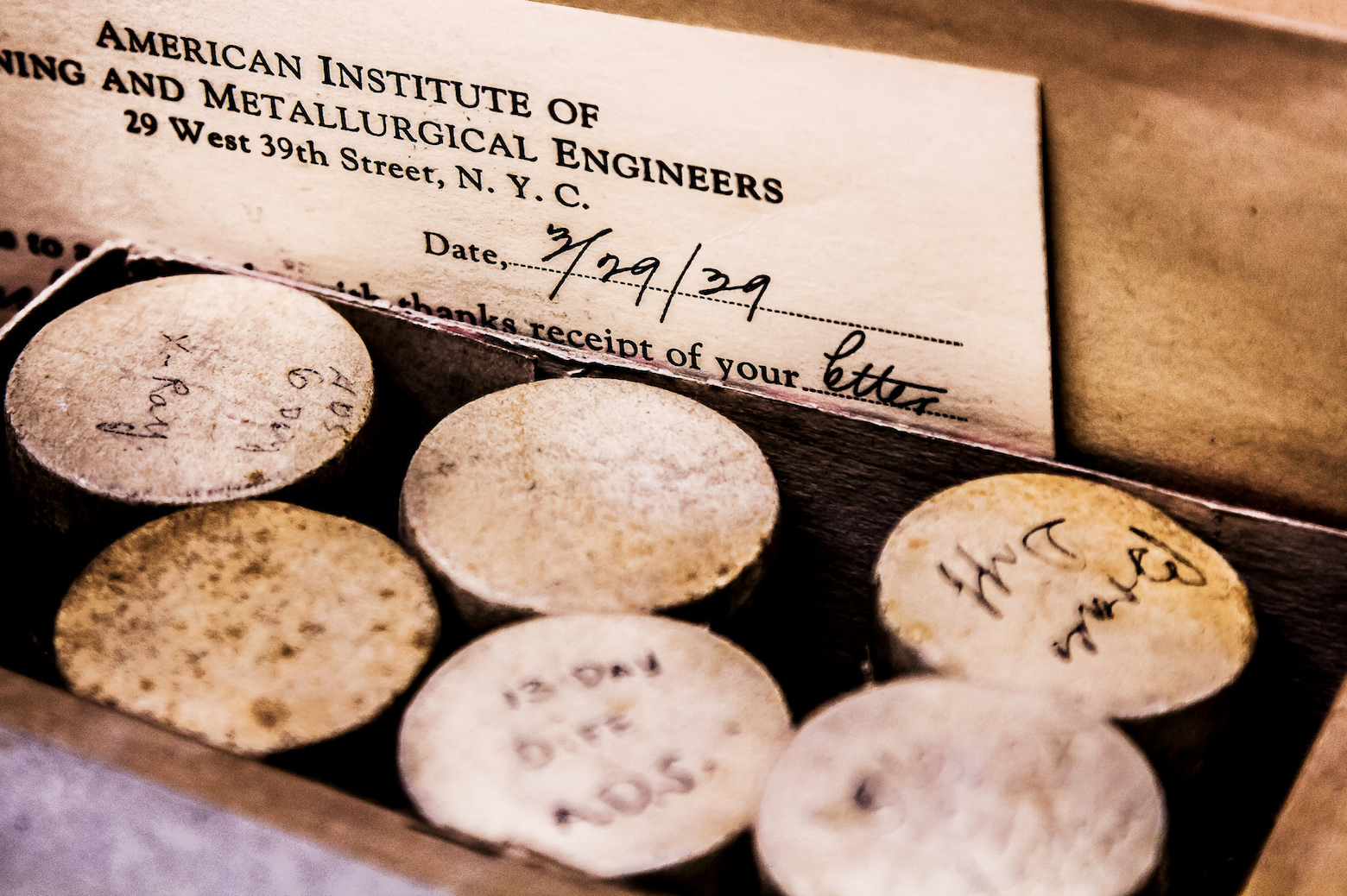 But Kirkendall wouldn’t forget. When the war ended, research shifted back from applied science to more theoretical pursuits. And Kirkendall, still working as an instructor at Wayne University, was ready with a third paper on the diffusion of solids.

This one was the blockbuster.

The newbie defies the establishment

Kirkendall used a copper-plated brass bar, this time adding molybdenum wires at the boundary between the two metals—markers that made the movement of the boundary more obvious. He conducted exhaustive mathematical calculations showing that the interdiffusion coefficient in this experiment agreed with the experiments detailed in his 1942 paper. He included metallograph images showing that the bar’s zinc had diffused into the copper faster than the copper diffused into the brass.

Finally, in April of 1946, Kirkendall confidently submitted his paper to the journal Transactions of the AIME, headed by the venerable R.F. Mehl, a major proponent of the exchange mechanism of diffusion.

Mehl was aghast at the very idea that Kirkendall—not yet a full professor at a newly minted university in Detroit—would attempt to turn the entire metallurgical community on its head. He rejected the paper, delaying its publication for more than six months. Eventually, a group of other scientists intervened, and Mehl agreed to publish the paper—on the condition that the discussion from the paper’s presentation would be published alongside it.

Kirkendall…was ready with a third paper…. This one was the blockbuster.

The five-page paper appeared in 1947—along with eight pages of discussion and debate that amounted to a precisely worded scientific food fight. Mehl and others questioned Kirkendall’s math, his methods and his measurements.

Mehl even dispatched a researcher from his lab, L.C.C. daSilva, to conduct his own set of diffusion experiments. Many believed that daSilva’s work would find the error in Kirkendall’s research. Instead, it confirmed it, duplicating the original results with a variety of metals and methods.

Finally—13 years after Kirkendall published his first paper on diffusion—Mehl relented. He took it upon himself to personally telephone the researchers who had been involved with the 1947 paper and tell them that he now fully supported Kirkendall’s work. In 1950, he and other metallurgy leaders convened and publicly proclaimed their support for Kirkendall’s work.

The five-page paper appeared in 1947—along with eight pages of discussion and debate that amounted to a precisely worded scientific food fight.

The effect of the Kirkendall Effect

The Kirkendall Effect has become a cornerstone of materials science in the decades since; critical to welding, metal alloying, thin film production and any other process where two different metals are joined together. And perhaps just as importantly, it stands as a testament to the power of scientific experimentation, creativity and perseverance.

“What I like about Kirkendall’s work is that he found such a clever way to study an atomic-level process without observing actual atoms,” said Amit Misra, chair of the U-M department of Materials Science and Engineering. “His experiment was simple and cheap, yet it changed the world. Kirkendall shows how Important it is to ask questions and think about what you’re trying to learn instead of repeating what others have done.” 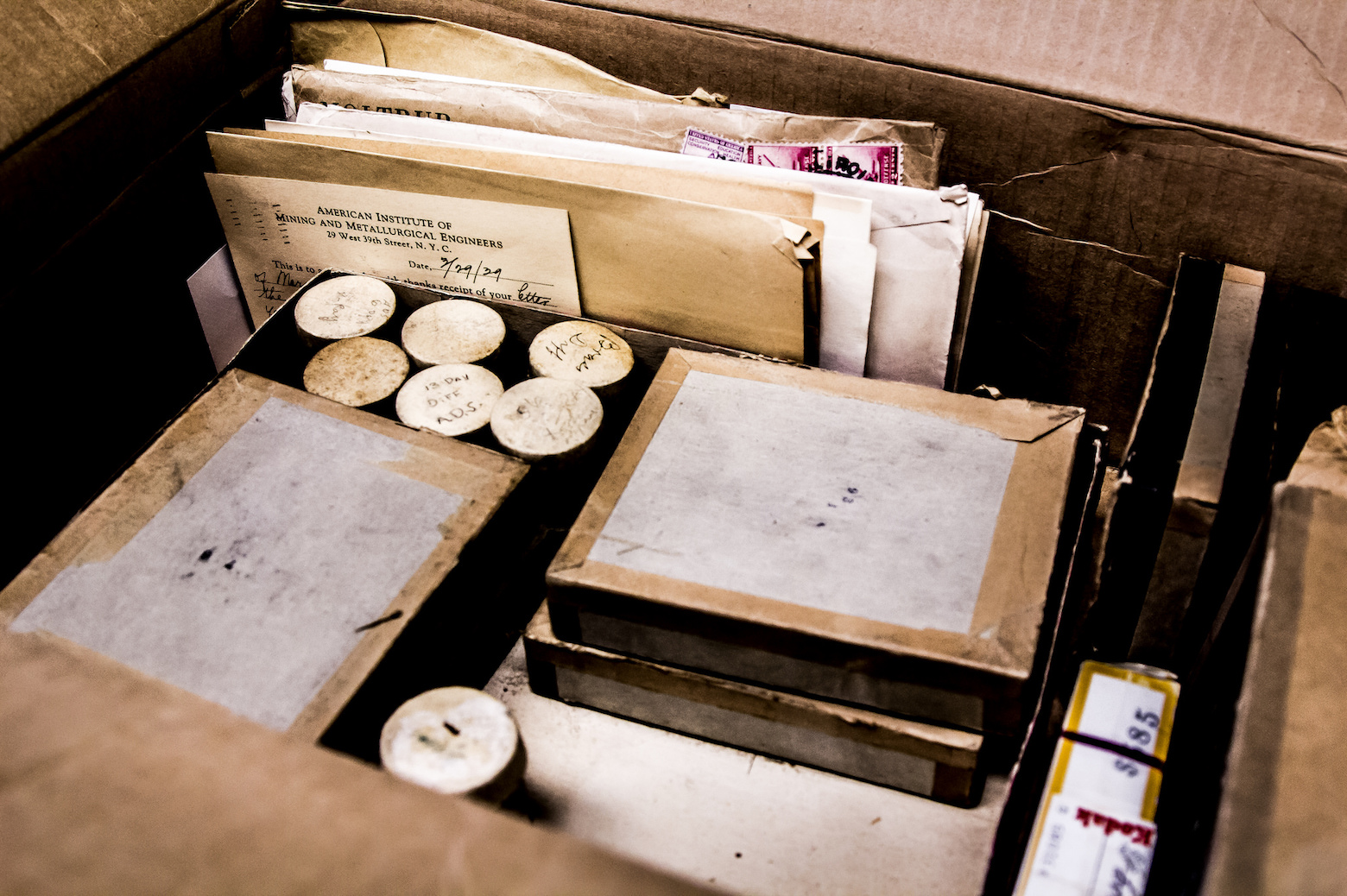 Mehl eventually reconciled with Kirkendall; shortly before Mehl’s death he invited Kirkendall for a visit and apologized for the harsh treatment of his third paper. The two shook hands and Mehl confided, “I wish I had an effect which had my name like your Kirkendall Effect.”

As for Kirkendall, he never wrote another paper. He left Wayne University in 1947 for a job as secretary of the American Institute of Mining, Metallurgical and Petroleum Engineers (AIME) and never looked back. The job at AIME paid more than double his salary at Wayne, and with three children to put through school, he couldn’t say no. But even though his academic career was short, he accomplished more than most professors do in a lifetime.

“Some breakthroughs stop being relevant after a certain amount of time, but I think as long as we’re teaching materials science, the Kirkendall Effect will still be relevant,” Misra said. “Like Newton’s research, it will always be relevant.”