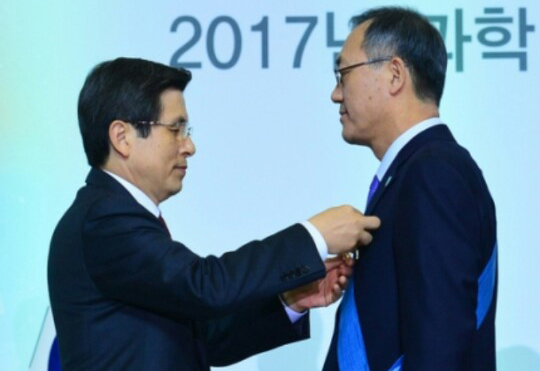 ECE alumnus Kukjin Chun (MSE PhD EE ’81 ’86) was honored by the President of South Korea with the Order of Science and Technology Merit, the highest national honor for a Korean scientist and engineer. This Order of Merit is awarded to those who have rendered outstanding meritorious services in the interest of improving science and technology.

Kukjin Chun is professor of Electrical and Computer Engineering at Seoul National University (SNU), where he served as department head from 2009–2011. He has done research in the area of microelectromechanical systems (MEMS) for over 30 years, working on their materials, structures, fabrication processes, and electronic readout circuitry. This includes work on tactile imagers, inertial sensors, pressure sensors, distance sensors, PM sensors, and RF-MEMS switches for automotive and industrial applications.

The Order of Merit recognizes Kukjin’s distinguished career in the MEMS field. In particular, he is known for his work with Korean industry to develop a transceiver with MEMS switches, contributing to the commercialization of fourth generation telecommunication (4G). 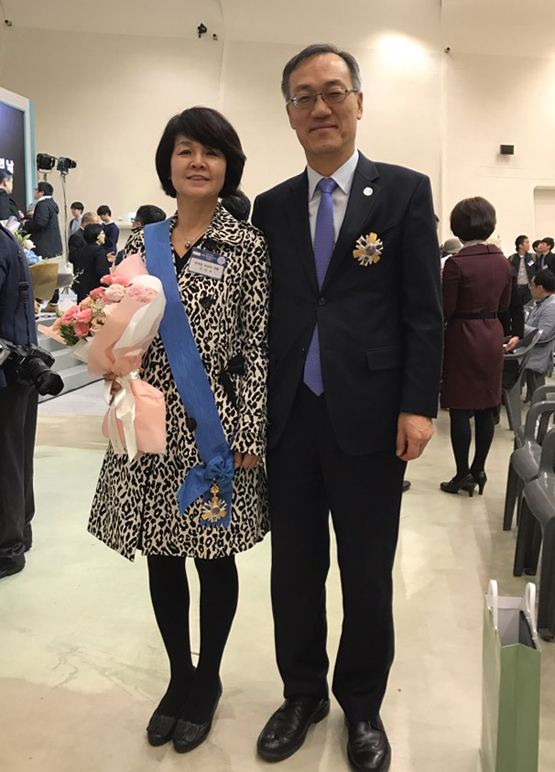 IMAGE:  Kukjin Chun and his wife.

In 1997, Kukjin set up an addition to SNU’s CMOS fabrication facility dedicated to MEMS technology. The new facility was the first of its kind in Korea, and is open to all Korean researchers. External users include Samsung Electronics, LG Electronics, and Hyundai Motors.

In 1997, Kukjin built an open infrastructure dedicated to MEMS technology at Seoul National University. The facility was the first of its kind in Korea, and is open to all Korean researchers. It has been used over 150,000 times to date, and its external users include Samsung Electronics, LG Electronics, and Hyundai Motors.

Kukjin was recently elected director of IEEE’s Region 10, overseeing 125,000 members throughtout Asia and Oceania. He hopes to expand the representation of the region’s smaller nations, and will also oversee the region’s 50th anniversary celebrations.

Kukjin studied under Kensall Wise, William Gould Dow Distinguished University Professor Emeritus while he was at Michigan. Prof. Wise is recognized as one of the world’s foremost experts in sensor technology as well as a MEMS (microelectromechanical systems) pioneer and innovator.

“I learned a lot from Ken in terms of how to perform research, how to teach students, and critical thinking,” Kukjin says. “I learned from the American system the importance of being honest and taking care of others.”

During his time in America, Kukjin enjoyed the Michigan culture and community. He also enjoyed his time at Huron Park with his family and neighbors, and fondly recalled the potluck holiday parties at Prof. Wise’s home with other students and staff.