A not-for-profit organization, JSTOR helps users to make connections to new sources of information among its comprehensive set of digital holdings. But JSTOR officially began as a grant-funded project of the Andrew W. Mellon Foundation at the University of Michigan in 1994. And that wouldn’t have happened had Michigan not already laid the groundwork in the 1980s and early 1990s in the then-nascent realm of digital collaboration.

In 1982, Daniel E. Atkins became the associate dean for research and graduate affairs at Michigan Engineering under newly-appointed Dean James Duderstadt. Atkins’ background was in high-performance computer architecture, and he had helped to design and build a number of experimental machines, including some of the earliest parallel computers.

Atkins and Director of IT Randall Frank launched one of academia’s most robust distributed networks, the Computer Aided Engineering Network.

Duderstadt and Atkins shared a vision of innovation that sprang from collaborative research. Both viewed the computer as key to amplifying collaborative efforts, and Atkins was charged with presiding over the College’s shift to distributed computing through the use of personal computers and network-based workstations. In 1983, Atkins and Director of IT Randall Frank launched one of academia’s most robust distributed networks, the Computer Aided Engineering Network (CAEN), to support this shift.

Next, Atkins collaborated with Frank and Maurita Holland, the head of the engineering library, to delve into the notion of digital libraries in a research project funded by NSF and Digital Equipment Corporation.

“Getting both librarians and technologists involved was critical to understanding the challenges posed by distributed computing, new digital materials, and the collection of pre-digital material,” Atkins says. “And it created a capacity in this area at Michigan.” 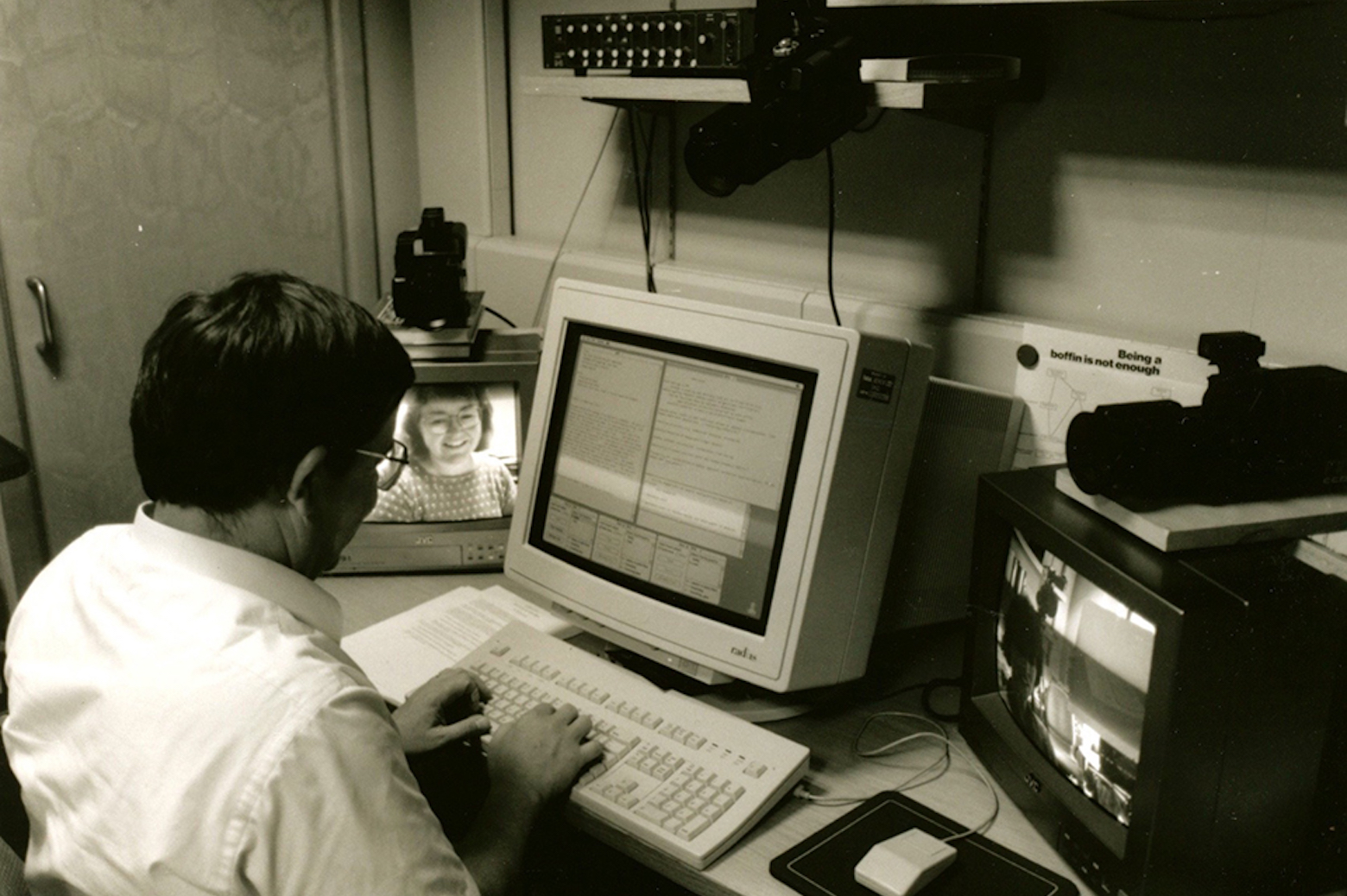 IMAGE:  Atkins conducting multimedia research on a Macintosh II series computer, around the period of the long-term grant to explore research collaboratories.

At the same time, technologies that would prove valuable for JSTOR were percolating across the College. In 1985, Atkins’ team was awarded an NSF grant to explore the concept of a “research collaboratory” in a project that extended for a decade; one outcome was the Ctools learning management system.

Another project that emerged in this timeframe was the Desktop Information Resources and Collaboration Technology (DIRECT) project, which was designed to develop distributed applications.

In the early 1990s, programmers at Michigan developed a Reuters-based newsfeed called ClariNet and a proprietary search engine called the Full-Text Lexiconographer, or FTL. Atkins nicknamed it, “Faster Than Light.”

By that time, personal computers were being used to develop new media even as the world of academic research was exploding with new journals and findings. Libraries were facing an identity crisis. An unprecedented blend of social and technical issues was emergent and the landscape was ripe for a new field of research and employment.

In 1992, in a move that initially roiled the library community, Atkins – an engineer – was placed in charge of the University’s School of Information and Library Studies, which was later transformed into the School of Information – the first of its kind in the nation. Although initially shocking to many, the move signaled Michigan’s belief that the values and service orientation of the library could be coupled with, and not displaced by, the technical promise of distributed computing.

Michigan was now at the forefront of a new information age.

Michigan was now at the forefront of a new information age.

As Michigan developed collaborative technologies and reimagined the library for the information age, William G. Bowen, past president at Princeton and president of the Andrew W. Mellon Foundation, was also grappling with issues related to libraries.

By the early 1990s, the Foundation was receiving a flood of grant requests from research libraries across the nation needing to expand their facilities to maintain comprehensive collections of an increasing number of academic journals.

Recognizing the magnitude of the problem, Bowen concluded that rather than investing in more bricks and mortar, he would advocate for something more radical: journals that would be archived and shared electronically and not physically stored in libraries. 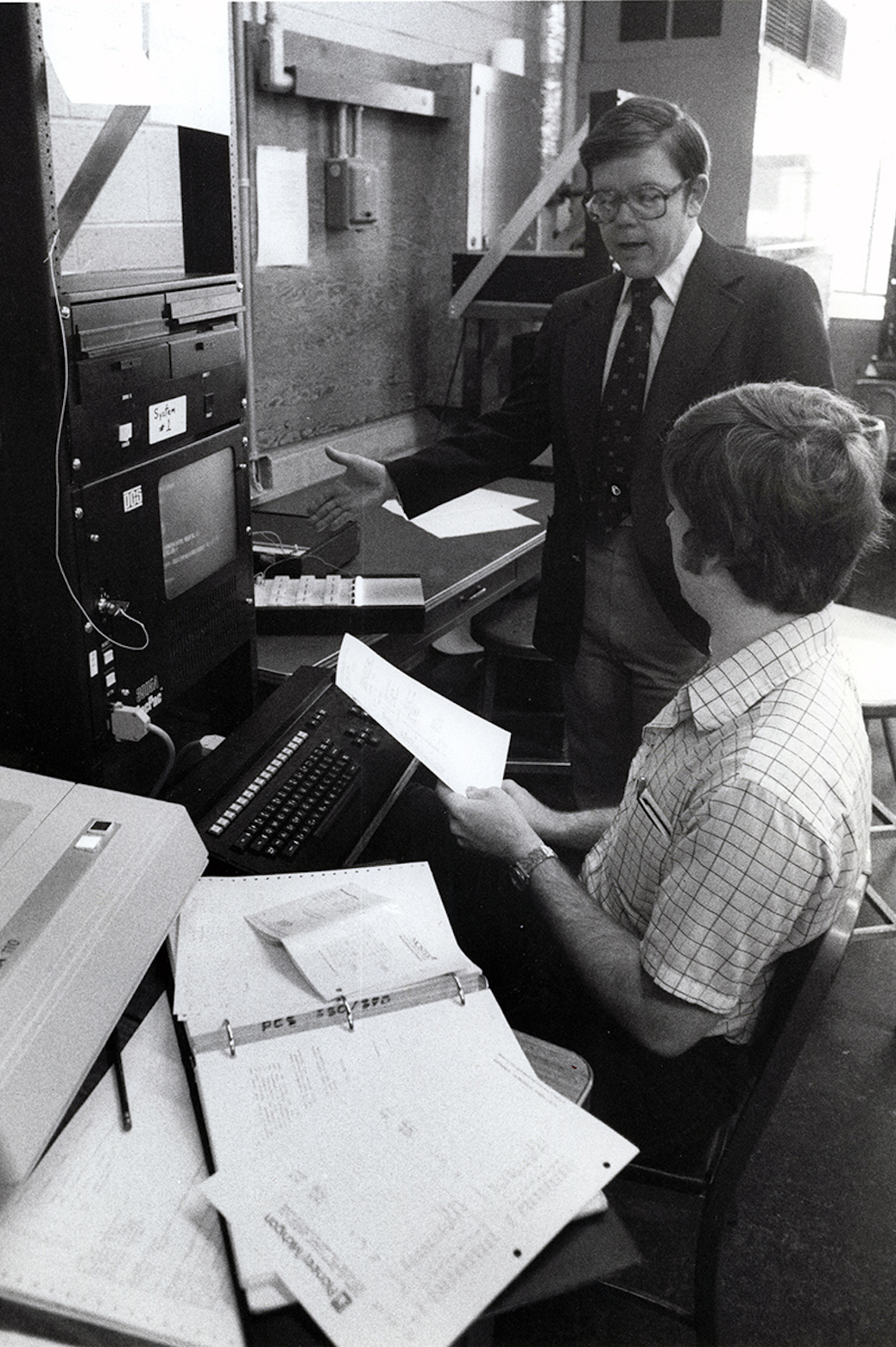 According to Atkins, this was the inflection point: “It was clearly a case of not just improving the buggy whip, but realizing that there could be a whole new modality of transportation.”

By 1994, Bowen had assembled an advisory council at Mellon and had developed a list of journals targeted for his project. He even had a name for his vision: JSTOR, for Journal Storage. Now, he needed a development partner to bring it to life.

Bowen and his team were aware of the work in digital collaboration and information science at Michigan, especially its large-scale publishing industry-academia collaboration in journal-sharing known as “The University Licensing Project” (TULIP). TULIP had been initiated by Dutch publishing house Elsevier in an effort to explore more cost-effective methods for sharing journal information across universities. Michigan leveraged their work from DIRECT for TULIP to great advantage, and Karen Hunter, VP at Elsevier and a librarian by training, said of the participating entities, “the outstanding player was clearly the University of Michigan.”

Bowen reached out, and he and Atkins teamed up to develop JSTOR. Bowen negotiated with publishers for material and to construct a workable business model; Atkins and the Michigan team developed the practices and technology to make JSTOR work through a grant from the Mellon Foundation to the School of Information. Although a separate entity, JSTOR was hosted administratively by the University, and JSTOR rented space for offices in Ann Arbor.

JSTOR was developed to allow for full-text searches across journals, with end results presented as an image of the original journal page for purposes of fidelity. But to operate as desired, a text version of each page image would need to exist for search purposes, with the text extracted from page scans.

One of the largest remaining technical challenges, therefore, was  development of a robust optical character recognition (OCR) system to do this. Atkins hired Spencer Thomas, who adopted statistical quality control approaches from the auto industry to craft a solution.

JSTOR currently offers more than 10 million academic journal articles, 45,000 books, and two million primary source documents in 75 disciplines, and is used at more than 8,000 institutions in more than 160 countries.

Another challenge was the retrospective conversion of extremely old journals. Many used unique typefaces, and in some cases physical searches had to be conducted at other institutions in order to assemble complete, undamaged copies of entire collections.

By 1995, JSTOR had enabled a new era of research – one in which researchers could find previously-unknown relevant information by searching across otherwise unknown or inaccessible journals. Atkins likes to cite the example of a Civil War historian who found new information in a law journal.

In 2009, JSTOR merged with and became a service of ITHAKA, a not-for-profit organization that works to advance and preserve knowledge and to improve teaching and learning through the use of digital technologies. Based on the success of JSTOR, ITHAKA went on to do similar projects in the area of art (ARTSTOR) and digital preservation (PORTICO).

JSTOR currently offers more than 10 million academic journal articles, 45,000 books, and two million primary source documents in 75 disciplines, and is used at more than 8,000 institutions in more than 160 countries. ITHAKA is based in New York, but retains a JSTOR office in Ann Arbor on Liberty Street.