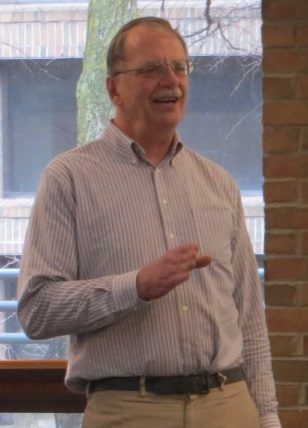 Growing up on a tiny, 250-acre farm in Washington state pointed Steven J. Wright toward a lifetime of problem-solving and a 40-year career as a professor of civil and environmental engineering.  His parents’ lifestyle mismatched their ambitions, he says, and this shaped his early vision for his vocation.  “In that dryland climate, you can’t make a living. So my father actually worked on an aluminum reduction plant for probably 35 years, mostly worked on the night shift so that he could do stuff on the farm during the day. He always wanted to have a farm. But looking at that as a model, that’s not a real lifestyle,” said Wright, an Arthur F. Thurnau Professor of Civil and Environmental Engineering. “The main thing that drove me was that I was going to do something different than what I had seen, and that it was important to have a career that provided meaning as well as sustenance.”  This mission has carried Wright through his remarkable tenure at U-M. He’ll retire at the end of the semester. (Actually, because of retirement furlough, he won’t be officially retired until 2018).

Throughout his career, Steve has put incredible energy into teaching and service. “Steve’s dedication and devotion to the department is second to none,” said Kim Hayes, the Donald Malloure Department Chair in Civil and Environmental Engineering and the Arthur J. Decker Collegiate Professor of Civil and Environmental Engineering. “His biggest and most selfless contributions have been in service and teaching, and are unmatched by any other faculty member I have met in my 30 years.”

He served as faculty advisor for many student organizations such as the Chi Epsilon Honorary Society and the Pantanal Partnership. Following collaboration with the Graham Sustainability Institute in program development, he joined the program as Faculty Director for Education and Outreach and initiated the Graham Sustainability Scholars Program.  He participated in various STEM outreach programs. And he pioneered various activities around campus to build the engineering community.

In 1998, Wright instigated and designed CEE’s beloved annual food drive, which pits students and faculty against each other to see who can donate the most to the Washtenaw chapter of Food Gatherers. The event got its start as a way to relieve end-of-term stress, and has since evolved into a tradition with a “Pork and Beans” trophy for winners. Last year, the drive brought in 4,360 pounds of food.

But what he’ll miss most in retirement is the students. Wright has taught over 20 core and elective courses including Introduction to Engineering, Design of Hydraulic Systems, Fluid Mechanics, Professional Issues and Design, and Coastal Hydraulics.

He takes an all-encompassing approach to teaching, and his efforts have not only helped students understand course material, but also “helped to shape the ways in which they came to view the world around them,” he said. In addition to being named Professor of the Year by U-M student organizations several times, his teaching evaluations have been among the highest of all professors in civil and environmental engineering for many years.  He has earned 30 honors and awards throughout his career for his dedication to and teaching of civil and environmental engineering. This includes the prestigious Arthur F. Thurnau professorship — U-M’s highest teaching honor — in 2006, a state Distinguished Professor of the Year Award in 2009 and the Chi Epsilon Arthur N.L. Chiu Outstanding Faculty Advisor Award in 2010.

Wright considers his students an extension of his family. While many professors develop strong relationships solely with their graduate-level students, Wright has always connected well with both undergraduate and graduate students and has found this extremely rewarding. And this has led to lifelong friendships and invitations to important family events.  “How many weddings of former students have I attended? It’s a fair number. Probably more than 10,” he says.

As a researcher, Wright’s colleagues described him as having an intuitive grasp on whatever problem he chose to tackle. His research focused on sustainable development, hydraulics, stormwater management and water quality issues in natural systems.. His PhD research, earned the international Lorenz G. Straub award and formed the basis for much of his early work at Michigan on environmental mixing processes in buoyant flows.  In later years, he concentrated on understanding and predicting highly transient air-water interactions in large stormwater and combined sewer collection systems for which he was recognized by the American Society of Civil Engineers with its Hydraulic Structures award.  He scholarly work been published in nearly 150 articles, and he has co-authored eight books.

Wright’s interest in sustainability has taken his research and students around the world. As a 2008 recipient of the Fulbright scholarship for teaching and research, Wright travelled to Chile to conduct ecological studies of hydroelectric power in Patagonia. He developed and co-taught a course on sustainable hydropower development in South America in 2008 and 2009 at the University of Concepción in Chile, and later took students to Liberia to study sustainable development in post-conflict countries for two summers. He will also co-teach a course in Costa Rica this coming May with one of his UM collaborators in Liberia. “A lot of times the trip will have an engineering focus, but in the end, that’s not what most students are going to take away,” Wright said. “It’s going to be the cultural interaction.”

Wright himself got started as an engineer on his parents’ farm. Early on, he could find solutions for whatever needed fixing. That acumen, combined with his talent in math and science, guided him to pursue a bachelor’s degree in agricultural engineering at Washington State University. From there, his educational path took him along a few serendipitous twists and turns.

In his third year of college during the late 1960’s, Wright was beginning to explore other options and even considered dropping out. It wasn’t until a mentor told him he envisioned him as the kind of student who would excel in graduate school that he decided to continue his studies. He earned his master’s in hydraulic engineering at Washington State and his Ph.D. in civil engineering at CalTech.

He has vivid memories of the day before his first class in the fall of 1977. “I remember thinking about some professors that I had taken courses from and feeling scared that I might be like some of them and not do a good job,” he said. “What I quickly came to realize is that if you approach your life with passion, those concerns are alleviated.” “Looking back on the path that led me to that point, is a little bit of guidance from a few people along the way that saw some potential in me,” he recalls. Wright has been paying that forward to students at U-M since 1977.