A crystal ball for crystal formation

U-M Energy Institute
January 4, 2017
Studying the role of shape in self-assembly came up accidentally as Sharon Glotzer and her colleagues were studying the properties of semiconducting nanoparticles their U-M colleagues produced.| Medium Read
Enlarge 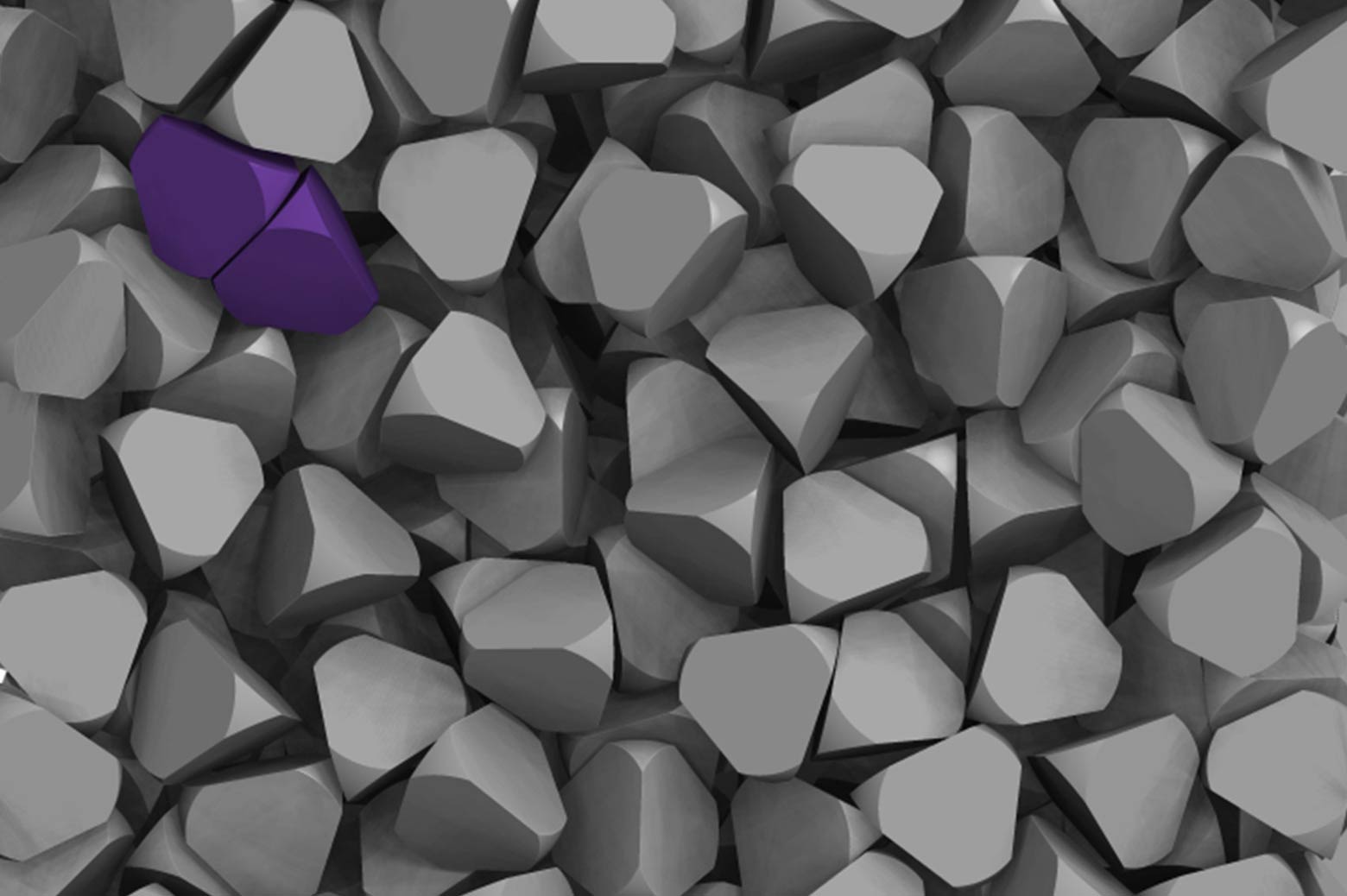 IMAGE:  The purple tetrahedra are beginning the process of crystallization. Image: Glotzer Lab, University of Michigan.

Jet turbine stability, chocolate smoothness and drug purity all rely on crystallization – transforming fluids into a highly ordered solid. Despite the ubiquity of this process, researchers are still trying to uncover exactly how molecular particles assemble to form a crystalline unit and the factors that drive how that template grows and repeats uniformly.

With 100 million hours on Titan, a Cray XK7 supercomputer at the Oak Ridge Leadership Computing Facility, the University of Michigan’s Sharon Glotzer and colleagues are expanding their earlier simulations to explore these important questions. “The emergence of complexity out of simple building blocks has been something that’s always been interesting to me,” Glotzer says.

When chemists think about what prompts small molecules and nanoparticles to self-organize, they gravitate toward intermolecular forces. Positively charged structures glom onto negatively charged ones through electrostatic attraction. Greasy substances clump together in water under sway of weak forces known as van der Waals interactions. Much of water’s behavior results from intermolecular forces known as hydrogen bonds.

But beneath those interactions, each particle has a basic shape, whether round, oblong or a polygon. That fundamental structure serves as a template for these other interactions, Glotzer says, changing their strength and tuning their influence on self-assembly.

Studying the role of shape in self-assembly came up accidentally, Glotzer says, as she and her colleagues were studying the properties of semiconducting nanoparticles their University of Michigan colleagues produced. Small changes in molecules on the surface of the nanoparticles led to big structural changes.

“Every time they changed that, they got a completely different self-assembled structure from what they had before,” she says. So her team decided to strip such systems down to their basics, removing all the interactions to look at the role of shape alone in crystallization.

The emergence of complexity out of simple building blocks has been something that’s always been interesting to me.Professor Sharon Glotzer
Tweet

By focusing on shape, their work zeroed in on the contribution of a single, fundamental thermodynamic property: entropy. Many people associate the idea of entropy with disorder, Glotzer notes. But more precisely, entropy pushes atoms and molecules to seek greater options in their vibrations and rotations.

In wide-open spaces, entropy can drive molecules to move in ways that appear random and chaotic. But in relatively confined spaces, an ordered-looking arrangement can provide that greater flexibility in scenarios that depend on particle shape. Theoretical physicists had played with this idea in the past, for instance showing that tiny balls that half-fill a box will choose to pack together to optimize entropy. Glotzer offers another example: pushing pencils into a pile on a table. The pencils naturally align parallel to each other, increasing the ways they can arrange without butting neighbors.

Two of the 2016 Nobel laureates in physics, J. Michael Kosterlitz and David J. Thouless, made fundamental contributions to understanding the complex process of crystallization and its relationship to exotic states of matter such as superconductivity. Working with others, they came up with a theoretical model known as KTHNY theory that looked at the behavior of two-dimensional disks. Unlike water that forms a direct, or first order, transition to ice crystals, KTHNY theory proposed that these disks would gradually form a new precrystalline, or hexatic, phase, followed by a second transition to their true crystalline form.

But the only way to test the idea was to run computer simulations, and such calculations required using large sample sizes (millions of particles) and running them many times to get a meaningful result amid random noise. Until recently such calculations were unwieldy, even on the largest supercomputers. “We could not have done the work if not on Titan,” Glotzer says. 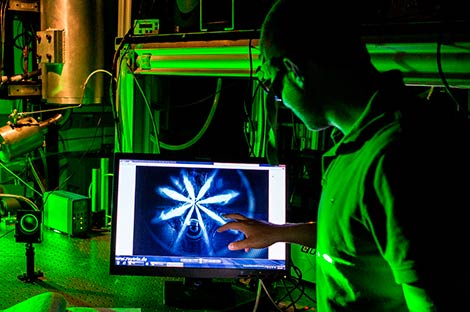 Take your research and career to the next step. Michigan Engineering invests in our graduate students with financial support and unrivaled faculty mentorship. Come, collaborate with the top leaders in your field.

In their first computing time allotment at Oak Ridge in 2015 — work supported through the INCITE (Innovative and Novel Computational Impact on Theory and Experiment) program — Glotzer joined Joshua Anderson, a Michigan research scientist, to perform simulations on Titan examining shape behavior. To simulate large enough systems on reasonable timescales, they developed a fast graphics processing unit implementation of the Monte Carlo simulations algorithm, building on what’s called the Monte Carlo checkerboarding technique. After the team’s first Titan project confirmed the hexatic phase in 2-D systems of disks, it set out to explore the role of shape on the KTHNY predictions.

The simulations showed that KTHNY theory was generally right, with a few unexpected modifications. For example, small hexagonal disks behave exactly as KTHNY predicted. Objects with greater numbers of sides all behave like round disks, making a direct transition to the hexatic phase followed by a slower transition to the crystalline form. Pentagons avoid the intermediate phase entirely and make a water-like transition from fluid to crystal.

Glotzer and colleagues are moving beyond shape alone, collaborating with experimentalists to study systems’ behavior. For example, the team recently worked with Chad Mirkin’s group at Northwestern University to model and predict the self-assembly behavior of nanoparticles decorated with DNA oligonucleotides — short molecules of genetic material — part of a DOE Energy Frontier Research Center (EFRC).

In their latest INCITE allotment, Glotzer’s team has explored shape in 3-D while adding back the contributions from other types of intermolecular interactions. They want to examine the assembly process frame by frame to understand exactly how and when atoms, molecules and nanoparticles unite as organized solids from fluids and the relative contributions of individual forces.

This information could be critical for many applications. For instance, jet engine turbines rely on materials that are highly resistant to fracture — properties fundamentally tied to the controlled growth of uniform crystals. In addition, pharmaceutical purity and efficacy rely on the reliable crystallization of active drug compounds. Problems in crystallization can lead to poor quality and ineffective or even harmful isomers in compounds. The quality and mouth feel of fine chocolate also relies on crystal quality, Glotzer adds.

Related Links
Via the Department of Energy Office of Science.

Glotzer says crystals can be far more complicated than those in table salt. Instead of having just one or two atoms in a repeating unit cell, some can have 16 or 83 particles in the unit cell, and some intermetallic species can have more than 20,000 atoms in a unit cell. “How do they form?” She wonders. “How in the world do they figure out that they’ve reached their unit cell and repeat? That’s amazing.”