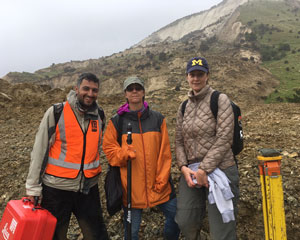 Associate Professor Adda Athanasopoulos-Zekkos deployed in New Zealand following the November 13, 2016, magnitude 7.8 earthquake to map landslides, liquefaction, fault rupture and other natural hazards associated with this major earthquake event. It is estimated that nearly 100,000 landslides occurred during this major earthquake. Athanasopoulos-Zekkos has been in New Zealand for nearly two weeks as part of the GEER (Geotechnical Engineering Extreme Events) U.S. team of engineers and scientists to collect perishable data on this major event.

Her work was featured in a December 6, 2016, article in the Marlborough Express.

The University of Michigan’s research team, including Adda Athanasopoulos-Zekkos and Dimitrios Zekkos, is featured in a December 13, 2016, Michigan News article.