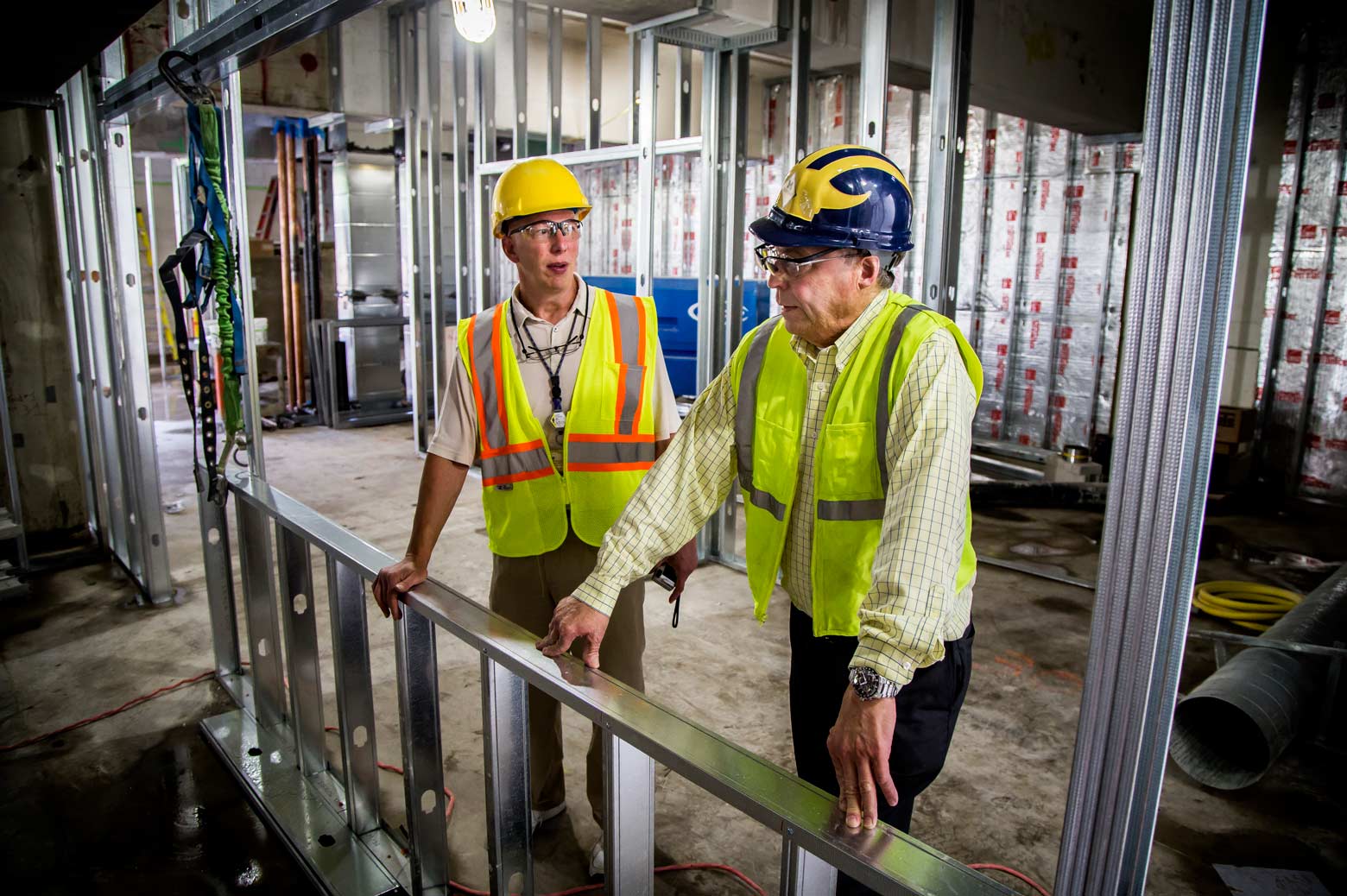 The extensive renovation to create the new NERS Nuclear Engineering Laboratory (NEL) at the site of the former Ford Nuclear Reactor is on schedule to be completed in early spring 2017.

The $12.4 million project will accommodate the tremendous growth of the NERS department. Research expenditures for 2015 – ’16 have reached some $22 million, up from $17 million last year, and six new faculty members will have joined the Department between 2010 and January 2017.

Walls, stairways and elevator shaft have been installed in the four-story, 13,000-net-square foot NEL. The fourth floor, which will house the John S. King Student Collaboratory, is nearing completion.

“The plans for the NEL’s laboratories, conference rooms and the Student Collaboratory have really taken shape over the past few months,” said Ron Gilgenbach, chair of the NERS department and Chihiro Kikuchi Collegiate Professor.

“To say we’re excited about the new facilities, which enable us to further our research in thermal hydraulics and nuclear detection, measurements and nonproliferation is an understatement — the building will provide the space we need to accommodate these expanding research programs,” he added.

Professor Annalisa Manera’s group has developed a high-resolution gamma tomography system to enable imaging of two-phase flows in complex geometries and high pressure facilities.
This unique imaging capabilities, characterized by spatial resolution down to 1mm, will be first
used to image two-phase flow structures within a simulated reactor fuel bundle. Manera’s NEL lab will also be equipped with a high-speed X-ray imaging system, to be employed for the quantitative visualization of two-phase flows at 70 bar in post-critical heat flux regimes. These investigations require the availability of shielding and high power, both of which will be available in the new laboratory. The height of the space allows for taller experimental setups, and the 12-meter length of her laboratory will enable study of the evolution of fully developed multiphase flows in horizontal pipes. Manera plans to combine her group’s advanced radiation-based measurements with existing capabilities in laser- and conductivity-based high-resolution measurement techniques to build an imaging lab to better study single- and two-phase flows. The high-resolution measurements will be used to further improve and validate the models of low- and high-fidelity computer codes, ranging from system codes, to subchannel and computational fluid dynamics.

Professor Sara Pozzi, who directs the Consortium for Verification Technology, focuses on development of new techniques for nuclear measurements and nonproliferation, including detecting and characterizing materials used to make nuclear weapons. The new laboratory will provide space for a linear accelerator to produce gamma rays and neutrons for studies leading to improved detection technologies. These technologies are especially important in the detection of shielded highly enriched uranium, which remains an open challenge.

Professor Igor Jovanovic, who joined the U-M NERS faculty in 2015, will continue development of spectroscopic methods for characterizing materials in-situ and at a distance as well as development of new detectors for fast neutrons and antineutrinos. Such detectors are used in the monitoring of nuclear reactors.

For students, the new fourth-floor Student Collaboratory will provide a gathering place to work on course projects and joint research. The spacious top-floor area includes multiple seating and workspace configurations and digital displays.

Funding for the NEL was provided by J. Robert Beyster, Gladys Knoll, the family of Harold Cohn, and friends and family of John. S. King. The NEL building has a rich legacy as the former home of the Ford Nuclear Reactor, constructed in the 1950s as part of the Michigan Memorial Phoenix Project. Dedicated to the peaceful applications of nuclear energy, the Phoenix Project supported several important experiments, including early studies of cosmic rays that led to the Nobel Prize for the bubble chamber, research on the use of radioactive iodine to treat thyroid cancer, and work that launched the field of neutron interferometry.

A ribbon-cutting will be scheduled for April 2017. Visit the NERS website for the date and further details.