A way to coax simple, inorganic nanoparticles to spontaneously assemble into shells has been discovered, potentially paving the way for more efficient industrial chemical processing, gene delivery and clean-up of chemical contaminants in the environment, researchers say.

And it explores how life may have started.

“This work brings up the deeper questions linking self assembly and the origin of life,” said Nicholas Kotov, the Joseph B. and Florence V. Cejka Professor of Chemical Engineering at the University of Michigan. “Cells, viruses—all life relies on compartmentalization.”

Kotov’s team demonstrated the self-assembly of simple nanoparticles into spherical shells about 20 to 50 nanometers across, or about half the diameter of a virus. The nanoparticles are made of cadmium sulfide, a semiconducting material that can be used to make solar cells. To clarify how the self-assembly occurred, Petr Král, a professor of chemistry at the University of Illinois, Chicago, and colleagues made detailed simulations of the self-assembled nanoparticle shells, down to the level of individual atoms. 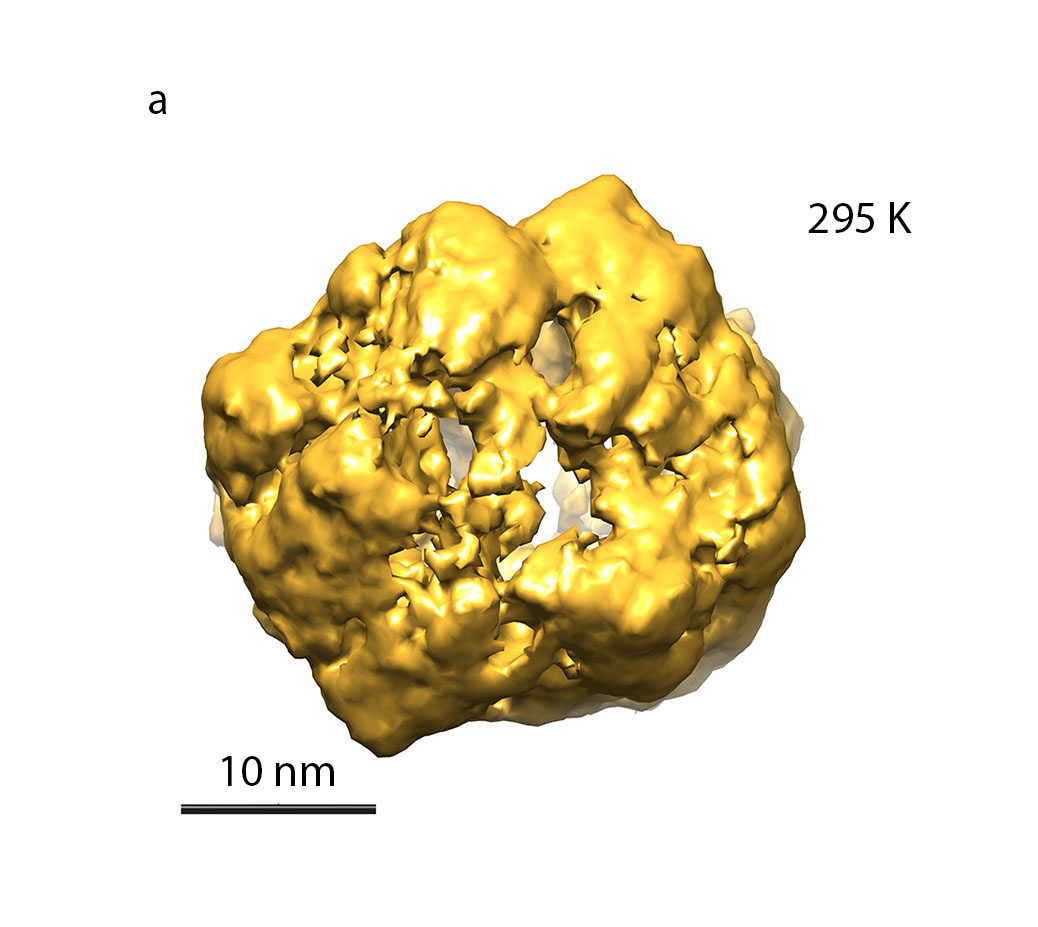 This high-fidelity modeling takes months to simulate less than a millionth of a second, so the Chicago team could not show the entire one-second process of the shells assembling. Still, they could show that once a shell had formed, the forces on the particles kept it together.

The individual cadmium sulfide particles, roughly shaped like four-sided pyramids, have a negative charge. This causes them to repel one another. But in close quarters, this repulsion is overcome by an attraction between the surfaces: The electrons on each particle run away from one another, creating positively and negatively charged regions on the atoms that are aligned so that the particles attract one another.

But when many particles come together, the repulsion from the overall negative charge becomes strong enough that despite the close-range attraction, they can’t form a solid sphere—particles on the inside get pushed out. Instead, they form shells. Peijun Zhang, a renowned expert in the shells of viruses and professor of structural biology at the University of Pittsburgh, and her group obtained precise three-dimensional images of the nanoshells with an electron microscope.

In order to cause the shells to form, the team needed to adjust only the pH, making the water moderately basic, which causes the negative charge on the nanoparticles. 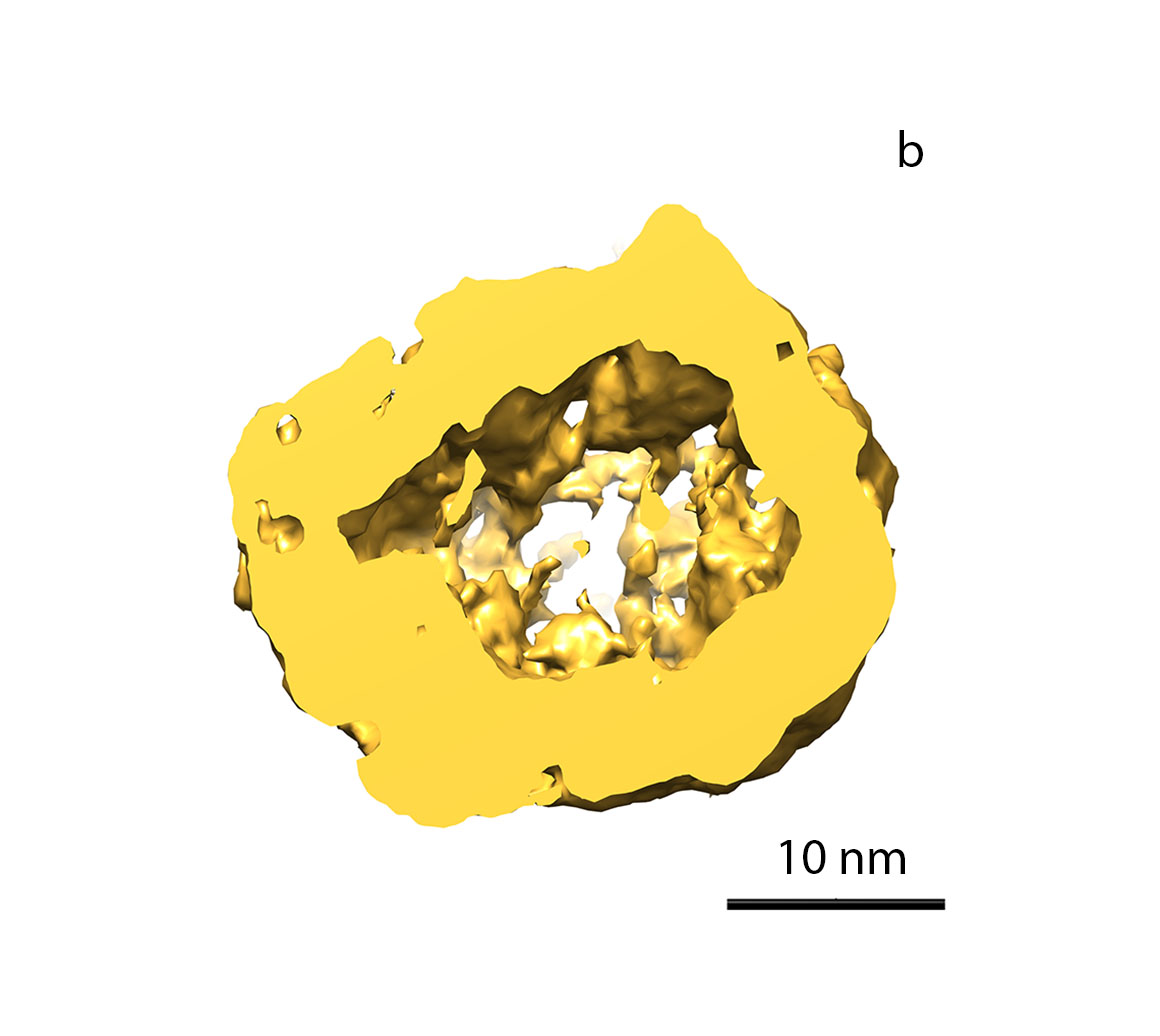 “The nanoparticles formed compartments without careful chemical organization. There was no need for peptides, amino acids or any organic molecules,” said Kotov, explaining how the work connects to the origin of life. “If there are particles from rocks, and liquid for mobility, compartments can form.”

Nanoshells could be catalysts, creating shortcuts in industrial chemistry by cutting the energy required to produce useful chemicals or reducing the waste products. The self-assembly mechanism may enable the shells to self-repair if they are damaged by the reactions, a common problem for catalysts. As catalysts, they may also be useful for cleaning up chemical spills.

Kotov is particularly interested in their potential for gene delivery, mimicking the natural viral shells currently used. His lab is currently exploring the viability of the nanoshells as capsules for gene therapy, a treatment for cancers and other disorders. The genes must be protected until they reach their target site in the body.

Take an Orson-Wells-style trip through a nanoshell in this interpretation of electron microscope images.

“It is a beautiful system with a lot of interesting science. It is much simpler than the systems of compartments in living organisms, but we can modify it, learn how to control it, and eventually engineer it for applications,” Král said.

As for the origin of life, the nanoparticles leave holes in the shells large enough for small molecules to pass through. Kotov plans to explore whether the shells can catalyze reactions to build organic molecules.