Michigan Engineering is the U.S. birthplace of aeronautical engineering, since it taught the nation’s first-ever course in that discipline in 1914. By the time Sputnik circled and beeped its way around the globe in 1957, Michigan Engineering was an established leader in the field, already extremely well-known among those who yearned to get in on the “Space Race.”

With the whole world watching – and the just-established NASA pumping limitless millions into the endeavor – few institutions figured more prominently than Michigan. Five of its students would orbit the earth, and three would go to the moon. Two separate NASA flights would launch into space with All-University of Michigan crews aboard. And all would become parade-worthy heroes.

Michigan Engineering had been involved since 1946 in the earliest research using German V-2 rockets captured at the end of World War II. While researchers in the U-M High Altitude Laboratory and Space Physics Laboratory continued their upper-atmospheric experimentation, work on larger rockets – for ballistic missiles and for satellites with both military and peaceful applications – would be conducted elsewhere. Air Force officers attended Michigan Engineering in the late 1940s for Pilotless Aircraft training, however, and for a Guided Missiles program in the early 1950s. Some of those students – along with several others – would volunteer for and serve in NASA’s astronaut program.

With the whole world watching – and the just-established NASA pumping limitless millions into the endeavor – few institutions figured more prominently than Michigan.

From its inception, NASA’s vast financial support fueled Michigan Engineering’s multifaceted efforts to build upon existing space research projects and to give rise to new ones. In 1963, NASA rewarded Michigan Engineering’s leadership with a $1.75 million grant to bring aerospace research under one roof in a new Space Research Building – and early in that same year Michigan Engineering Professor Harm Buning traveled to the NASA Johnson Space Center in Houston to teach its first two groups of astronauts. Buning later called it a “thrill” to discuss orbital mechanics with this “illustrious student body….[of] astronauts …who were going to ‘live orbital motion,’ who themselves would be ‘orbital objects’…. I don’t think I ever had a more dedicated and motivated bunch of students than on that occasion.”

By early 1965 the Gemini program had launched its first manned flight, and on June 3 of that same year Gemini 4 would carry into space NASA’s first All-Michigan crew – Edward H. White II, who earned a master’s degree in aeronautical engineering in 1959, and James A. McDivitt, who received a bachelor’s degree in aeronautical engineering that same year. As Gemini 4 orbited the Earth, White became the first American to “walk” in space – an experience White found so exhilarating that he ignored McDivitt’s repeated orders to return to the capsule until at last he relented. (White later was scheduled to fly in Apollo 1 but died alongside Gus Grissom and Roger Chaffee in a January 1967 launch pad fire during a test for that flight.) 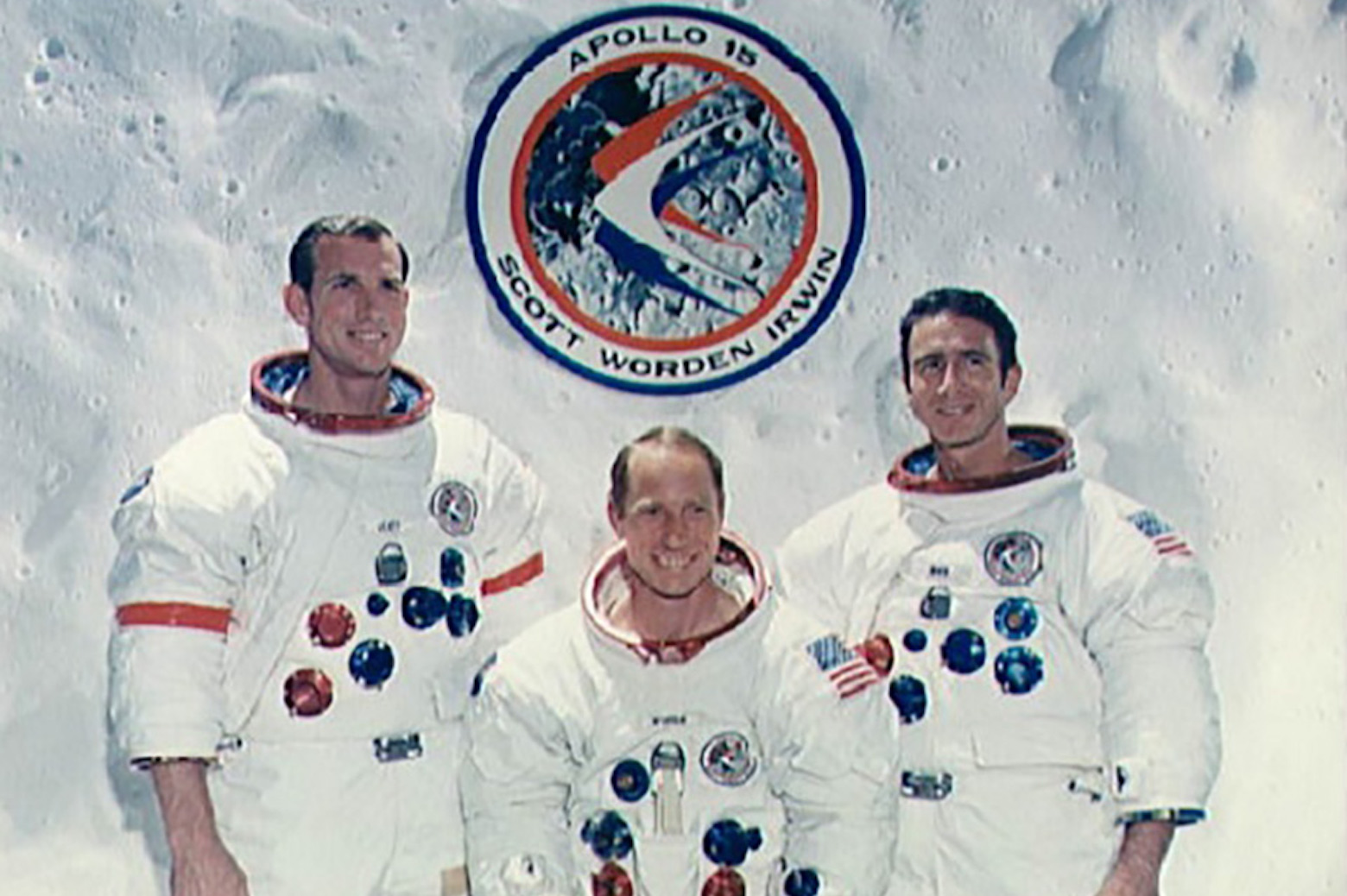 Parade-worthy Heroes
The first-ever space-walk caused such a stir that barely one week after their return to Earth the Michigan heroes were welcomed with a parade down Ann Arbor’s Main Street. Each received an honorary doctorate of engineering in front of 30,000 Michigan Stadium spectators, and construction of the NASA-funded Space Research Building sped toward completion so that the conquering astronauts could attend a dedication ceremony later that day. The City of Ann Arbor honored the Gemini 4 crew members with a plaque that designates the intersection of South and East University Avenues – near the Engineering Arch on Central Campus – the “McDivitt-White Plaza.”

Though the Gemini 4 mission may have been the emotional high point in Michigan’s relationship with NASA, Apollo 15 – which blasted off on July 26, 1971, with a three-man All-Michigan crew consisting of James Irwin, Al Worden, and David Scott – might be better remembered. It was the fourth mission to land men on the Moon, but it was the first flight of the Lunar Roving Vehicle – and considered a nearly unqualified success as the first in a planned series of three advanced missions to observe the lunar surface; survey and sample lunar material and surface features; conduct surface and in-flight experiments; and take photographs from lunar orbit.

The Apollo 15 mission certainly had its historic import. But it has loomed even larger in Michigan Engineering lore primarily due to a lingering flag controversy.

For years, the campus-wide legend was that the All-Michigan Apollo 15 crew had left a Michigan (Block M”) flag on the moon. As a rumor passed down over many years, it found its way into various pieces of University literature, was a fixture of campus tours and even spawned a Facebook group called, “Oh Ya? Well We Have a Flag on the Moon Bitches.” (Even Michigan Engineering’s own brochures propagated the false information until fairly recently.)

And thus was established the lunar branch of the University of Michigan Alumni Association.

And thus was established the lunar branch of the University of Michigan Alumni Association.

If there was any doubt whether a Michigan flag was planted on the Moon, one had only to ask none other than Professor Harm Buning – who knew the astronauts, of course, because he had taught them. In a 2006 interview with The Michigan Daily, Buning explained that while the Michigan astronauts brought 20 U-M flags aboard, none left the shuttle. He surmised that the flags’ journey so close to the lunar surface led many to speculate that one remains there today.

Yet skeptics – and the uninformed – remained. In a 2011 Michigan Daily follow-up, even former President Mary Sue Coleman said she believed the rumor: “Oh really? …I thought it was true. I could have bet you just about any amount of money that it was true.” On the other hand, the Daily also reported that a newer Facebook group – “People Who Are Real Mad That We Actually Don’t Have A Flag On The Moon” – recently had been formed.

Apollo 15’s Lunar Module pilot James B. Irwin earned two master’s degrees in aeronautical engineering and instrumentation engineering in 1957, Command Module pilot Alfred M. Worden completed the same degrees in 1963, and Commander David R. Scott studied mechanical engineering for a year at Michigan before transferring to the U.S. Military Academy at West Point. Like the Gemini 4 crew before them, all three Apollo 15 astronauts were invited to Michigan after the flight to receive honorary doctorates.

Jack Lousma (BSE 1959), who commanded Skylab2 in 1973 and piloted the Space Shuttle Columbia on its third flight in March 1982, also received an honorary doctorate degree. Lousma later became an adjunct Professor in the Aerospace Engineering Department.

Sources for this story include The Third Quarter Century, Helena S. Buning (1989) and Aeronautical and Aerospace Engineering at the University of Michigan, Thomas C. Adamson (2002).

Many faculty were pioneers in the field, helping to lay the groundwork for areas such as control theory, wireless communication and traffic management.| Medium Read