by Nicole Casal Moore
Michigan Engineering
October 3, 2016
Researchers at the University of Michigan and Rice University have developed a new tool to help forecast solar storms and their effects on the power grid and communication satellites.| Medium Read
Enlarge 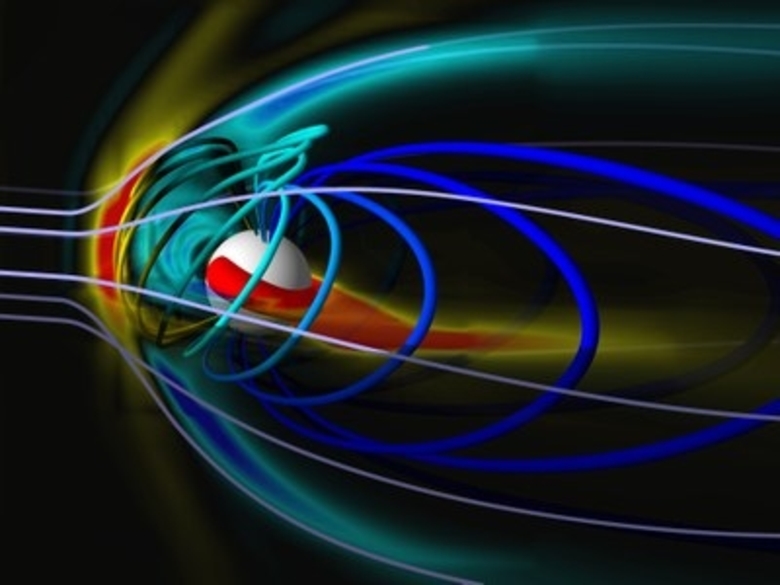 IMAGE:  A model of the activity in the magnetosphere of a planet when there is a solar storm. Model: University of Michigan

For the first time, forecasts of the regional effects of solar storms will help protect the power grid and communications satellites, thanks to a new tool developed by researchers at the University of Michigan and Rice University.

Solar storms are torrents of charged particles and electromagnetic fields from the sun that rattle the planet’s magnetic field. Major disturbances can send harmful current into power lines, hampering operations and putting expensive transformers at risk. They can also damage satellites.

Previously, scientists knew when a storm was headed toward us, but it was impossible for them to predict where on Earth it would hit hardest. So utility companies and satellite operators couldn’t always limit damage to their systems by shutting off key components.

That changed Oct. 1, when the National Oceanic and Atmospheric Administration’s Space Weather Prediction Center started using a new geospace forecast model that can give unique data for each 350-square-mile plot of Earth, and up to 45 minutes before a solar storm hits.

“This is the first time that utility companies will have a regional forecast of space weather effects with any lead time,” said Dan Welling, assistant research scientist in the U-M Department of Climate and Space Sciences and Engineering and one of the model’s developers. “Compared to atmospheric weather forecasting, this sounds like a trivial step, but in terms of space weather, it’s a giant leap.”

Humans haven’t experienced a catastrophic solar storm since putting up the grid and launching satellites. The “Carrington event” in September 1859 caused significant disruption, but only telegraph wires were around. They continued banging out and receiving messages even after their power supplies were disconnected, and some even set the paper on fire.

If a similar event happened today, “it would really be a disaster much worse than a major hurricane,” said Gabor Toth, research professor in the U-M Department of Climate and Space Sciences and Engineering and one of the model’s developers.

Power outages could last months or more because it could take that long to replace any damaged electrical transformers. That’s a long time in societies that depend on electricity for essentials like food, heat, water and communication.

“The Geospace model will help us provide better information to the North American Electric Reliability Corporation, and through them, to the grid operators whose decisions affect over 334 million people in the U.S. and Canada,” said Howard Singer, chief scientist at the Space Weather Prediction Center. “Our forecasts will be used to provide, for the first time, the actionable regional information needed to reduce the risk from extreme space weather.”

Unlike most present-day models, the new one is not based on statistics.

“This is the first high-performance physics-based geospace model that can run faster than real time,” said Tamas Gombosi, the Konstantin I. Gringauz Distinguished University Professor of Space Science and the Rollin M. Gerstacker Professor of Engineering at U-M.

It pulls together three components that researchers worked for a quarter century to develop and meld: a “magnetohydrodynamic” model that simulates effects on the Earth from electric and magnetic fields, an ionosphere model that represents aspects of the top layer of the Earth’s atmosphere, and a “ring current” model that gives insights into a region of hot particles that encircles the planet. Scientists at U-M developed the first two and at Rice, the ring current model.

“The ring current, located in the inner magnetosphere, is connected to both the ionosphere and the outer magnetosphere and its inclusion was crucial to making realistic predictions with the model,” said Stanislav Sazykin, associate research professor in the Department of Physics and Astronomy at Rice. “We were able to construct a coupled model that is robust and stable.”

Scientists have estimated an up to 12 percent chance that Earth could be hit with an extreme solar storm in the next decade. In 2012, a Carrington-scale ejection crossed Earth’s orbit and missed us by a week. Since that time, important measures have been taken. In June 2014, the Federal Electric Regulatory Commission began requiring utilities to prepare for solar storms. And in 2015, the White House released a Space Weather Action Plan.

Extreme space weather can happen at any time, but historically the strongest storms tend to hit during the declining phase of the sun’s 22-year activity cycle.

“The largest storms occur after solar maximum, so we are in the most dangerous period right now,” Gombosi said.