Michigan Engineering
October 26, 2016
This achievement will allow for a better understanding of the rules that govern the formation of quasicrystals and provide a toolset for researchers seeking new ones with different components and rotational symmetries.| Medium Read
Enlarge

IMAGE:  The fiver layers of the quasicrystal. Photo: Murray Lab, University of Pennsylvania

Crystals are defined by their repeating, symmetrical patterns and long-range order. Unlike amorphous materials, in which atoms are randomly packed together, the atoms in a crystal are arranged in a predictable way. Quasicrystals are an exotic exception to this rule. First discovered in 1982, their atoms pack together in an orderly fashion, but in a mosaic-like pattern that doesn’t repeat and can’t be predicted from a small sample.

Being able to map out the position of individual atoms within a quasicrystal is a prerequisite for achieving a complete understanding of their structure and aids in designing them for specific applications, but conventional microscopy techniques don’t have the resolution to accomplish such a task.

In an effort to address this challenge, researchers from the University of Pennsylvania and the University of Michigan have engineered a quasicrystal that is formed by self-assembling nanoparticles, which are an order of magnitude larger than the atoms that comprise traditional quasicrystals. Their larger size enabled the team to use a suite of microscopy and simulation techniques to deduce, for the first time, the full three-dimensional configuration of a spontaneously formed quasicrystal. 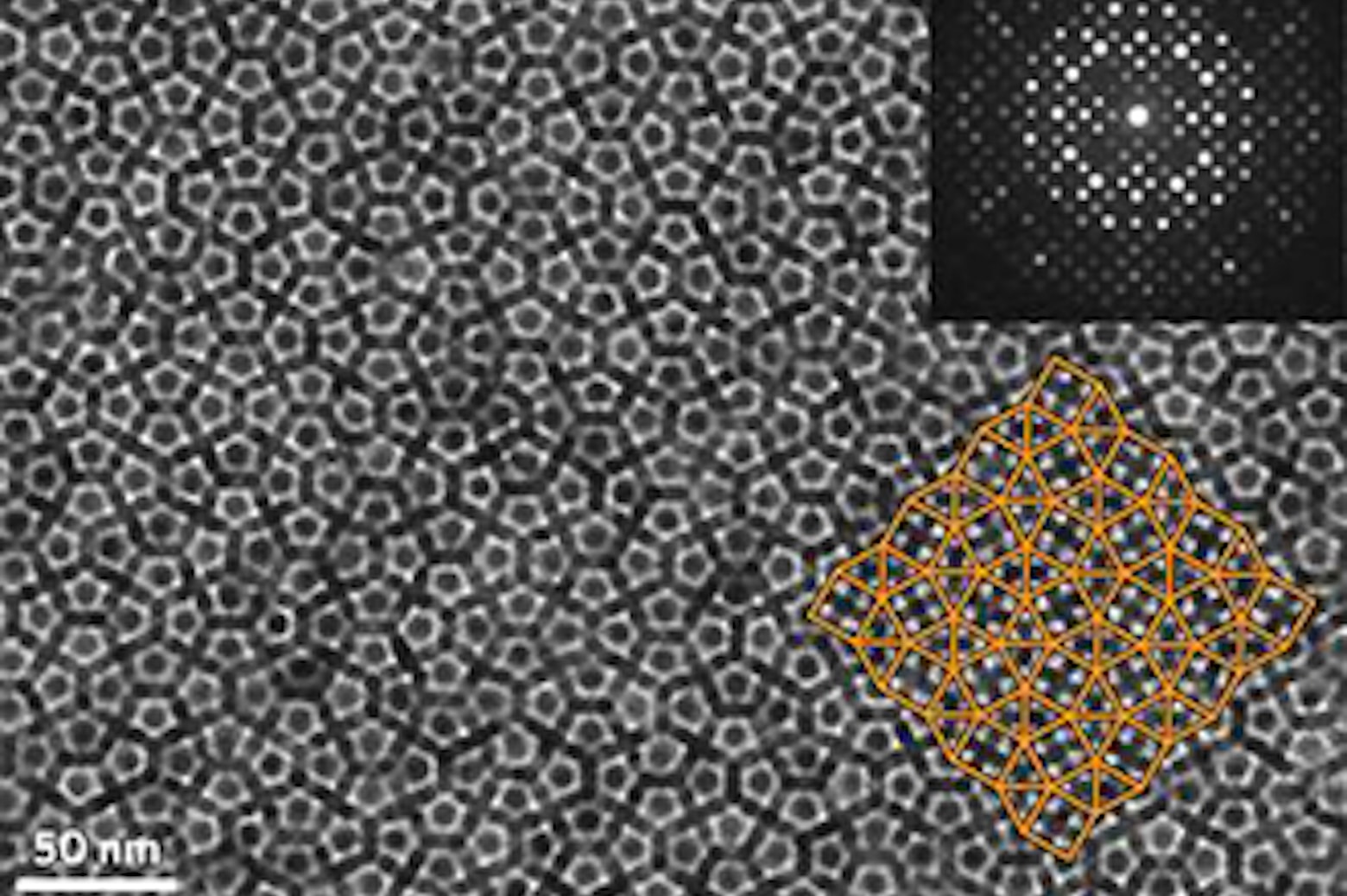 IMAGE:  A layer of the quasicrystal made in the Murray Lab at the University of Pennsylvania.

This achievement will allow for a better understanding of the rules that govern the formation of quasicrystals and provide a toolset for researchers seeking new ones with different components and rotational symmetries.

They collaborated with researchers from the University of Michigan, led by Sharon Glotzer, John W. Cahn Distinguished University Professor of Engineering, with appointments in Chemical Engineering and Materials Science and Engineering, and including then-lab-members M. Eric Irrgang and Michael Engel, PhD.

They published their study in the journal Nature Materials.

The discovery of quasicrystals was awarded the Nobel Prize in Chemistry in 2011, but not before a protracted scientific battle. The standard method for determining the internal pattern of a crystal—x-ray diffraction—showed a configuration that was thought to have been impossible. It had no translational symmetry, meaning there was no repeating pattern to its structure but did have rotational symmetry, like that found in a snowflake.

“Because quasicrystals have only rotational, but no translational, symmetry, you can’t find a unit cell, the smallest building block that repeats,” Ye said. “The problem with atomic quasicrystals was that there was no direct imaging method. You could see a 12-fold rotational symmetry in the diffraction pattern, but you can’t see individual atoms in real, three-dimensional space.”

The most powerful electron microscopes are now capable of this level of resolution, but by nature must focus in on tiny regions of a sample and only provide an image that is a two-dimensional projection. This is sufficient for determining the structure of a regular crystal, as their periodic patterns mean that any one region will look identical to its neighbors. Quasicrystals have no such pattern, making direct studies of their structure impossible. 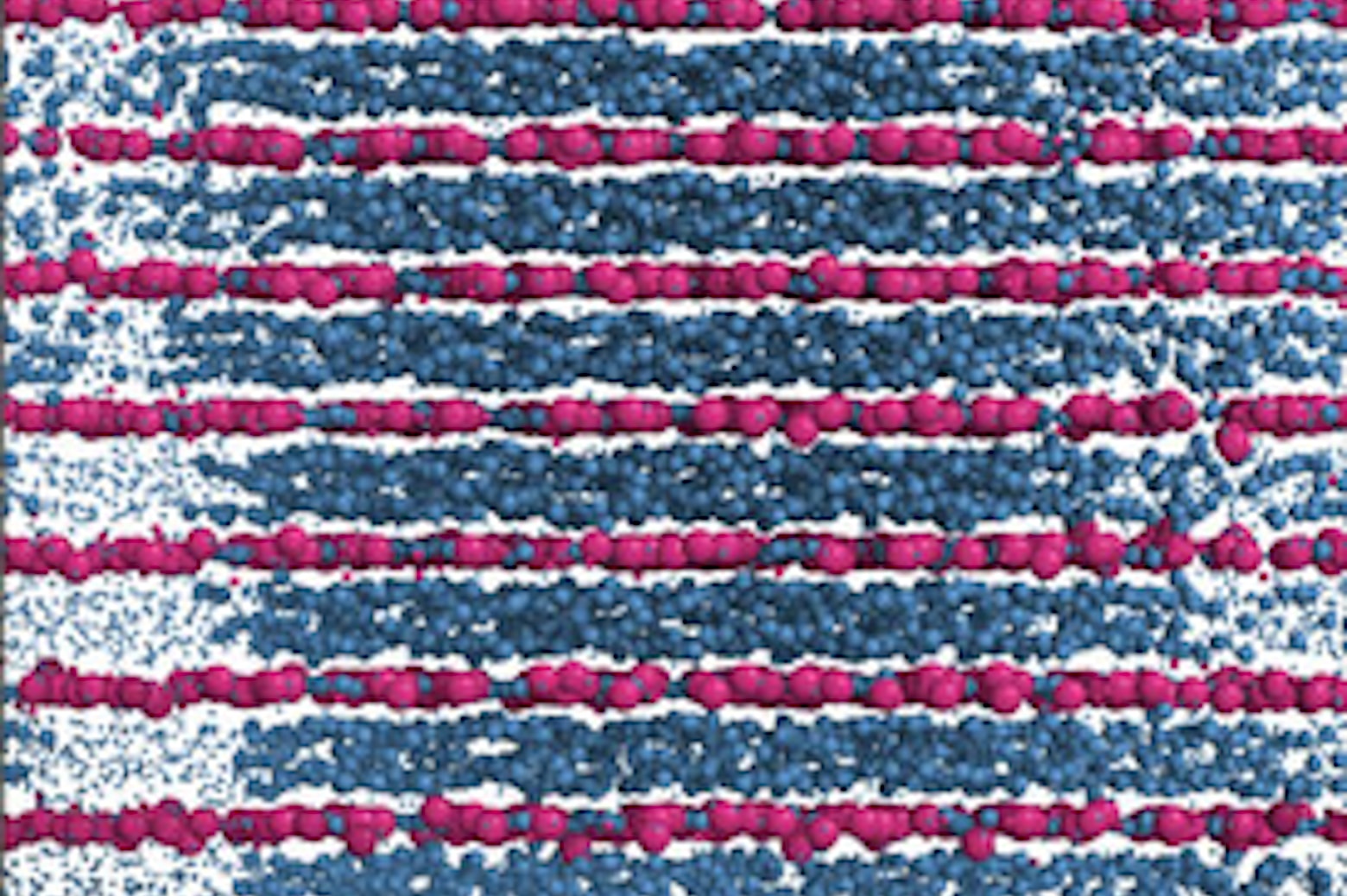 IMAGE:  Side view showing the major layers in pink and the minor layers in blue. Photo: Glotzer Lab, U-M

“Whenever you’re looking to study a material, or thinking of useful properties it could have,” Ye said, “you need to solve its structure first. The lack of periodicity in quasicrystals means you have to look at the arrangement of atoms over larger length scales.”

Unable to increase the resolution of imaging techniques, the researchers attacked the problem from the other side: making the “atoms” in the quasicrystal bigger. Murray and his lab members created nearly spherical nanoparticles of two different sizes to stand in for the atoms that would normally compose a quasicrystal.

“We feel this work provides an exciting example of how nanoparticles can serve as “artificial atoms” to reveal fundamental process that are relevant to materials design across many length scales,” Murray said.

The size and shape of these artificial atoms cause them to self-assemble into a “superlattice” that has the kind of non-repeating pattern the researchers aimed to investigate.

“One of the challenges is to achieve structures of exceptional quality, in which you see the pattern over very long, macroscopic distances,” said Glotzer. “That’s what the Penn group is able to do—that’s their superpower.”

The researchers used a type of tomography, a technique that produces volumetric images like those found in a CT scan, in addition to a suite of traditional electron microscopy approaches, to characterize the quasicrystal they had made. This combination of techniques was necessary to determine the rules by which the quasicrystal’s two components nestle together to form a complex, multilayered tessellation.

“The 12-fold symmetry is broken when you move through the layers of the crystal,” Ye said, “so you have to look at different depths to deduce the overall 3-D structure.”

Once the Penn team collected this experimental data, they handed it over to the Michigan team, who ran computer simulations to make sure the various microscope images combined into a cohesive whole.

“The beauty of this collaboration,” Murray said, “is that the modeling and simulation draw out so much more insight than individual experiments could on their own. When studying material and processes at mesoscopic length scales, both the structure and the dynamics are critically important and the modeling insight brings a whole new dimension to the work.”

Building a computer model of the quasicrystal, the Michigan team confirmed that the rules inferred from the data made sense and would result in a stable quasicrystal.

“The experimental group had a limited number of measurements they could take, and we had to figure out what we had in our toolbox that matched up with what they had in their toolbox,” said Irrgang.

Irrgang compared the nanostructure built by the Penn group to a big pan of lasagna, with the large particles demarcating the major layers, and the smaller particles defining layers between them. “You’ve got noodles, ricotta and tomato sauce, and you can repeat the whole thing as many times as you like.”

The Michigan team also reproduced the growth of the quasicrystal in simulation by allowing the nanoparticles to move freely and interact based on their size. Observing growth in simulation is important because quasicrystals cannot rely on the templating effect that is usually associated with the repeat pattern of a crystal.

“Our computer simulations provide time-resolved information of how nanoparticles attach to the quasicrystal,” Engel said. “The door is now wide open to investigate quasicrystal growth in follow-up work, a question puzzling researchers since the discovery of quasicrystals in the 1980s.”

The combination of experimental and computational approaches to solving the 3-D structure of this exotic form of matter is a first step in the design process for new quasicrystals, whether they are made from atoms or nanoparticles.

“Based on the rules, we have some understanding of why this particular structure forms,” Murray said. “This work could lead to the design of broad new classes of quasicrystalline or aperiodic materials and more specifically to materials that exhibit the properties of crystalline matter at the nanoscale and aperiodic matter on mesoscopic length scales where the flow of charge, heat, light and magnetic spin all depend critically on the symmetry of the underlying material.”

Xingchen Ye is now a postdoctoral researcher at University of California, Berkeley, and will soon start as an assistant professor in Chemistry at Indiana University.

Michael Engel is now an assistant professor in the Institute for Multiscale Simulation at Friedrich-Alexander-University Erlangen-Nuremberg, Germany.

Angang Dong is now a professor in the Department of Chemistry and Collaborative Innovation Center of Chemistry for Energy Materials at Fudan University, Shanghai, China.

M. Eric Irrgang is now a research associate in molecular physiology and biophysics at the University of Virginia.

The research was supported by the U.S. Department of Energy Office of Basic Energy Sciences, Division of Materials Science and Engineering under Award No. DE-SC0002158, National Science Foundation Materials Research Science and Engineering Center Award No. DMR-1120901, the US Army Research Office under Award No. W911NF-10-1-0518 and by the Assistant Secretary of Defense for Research and Engineering in the U.S. Department of Defense under Award No. N00244-09-1-0062, the Simons Foundation, the National Basic Research Program of China (2014CB845602) and the Natural National Science Foundation of China (21373052). This work used the Extreme Science and Engineering Discovery Environment (XSEDE), which is supported by NSF grant number ACI-1053575, XSEDE award DMR 140129. Additional computational resources and services were supported by Advanced Research Computing at the University of Michigan, Ann Arbor. Any opinions, findings, and conclusions or recommendations expressed in this publication are those of the authors