The naval tow tank: quite the attraction

by Gabe Cherry
October 15, 2016
Built into the West Engineering Building in 1904, the Physical Model Basin was the first of its kind.| Medium Read

To 18 year-old Corning Townsend, $300 per semester seemed like an awful lot to pay for college tuition. He had come to U-M’s Naval Architecture and Marine Engineering department in 1959 from his hometown near Buffalo, New York, knowing that he wanted to work on ships. But the out-of-state tuition gave him sticker shock. So he hatched a plan to gain in-state residency.

“As soon as I got into U-M, I dropped out and got a job,” he said. “After six months, I had in-state residency and my tuition dropped more than half.”

But it wasn’t just any job. Townsend became a carriage driver at the U-M Tow Tank, a 360-foot testing basin located in what was then called West Engineering on Central Campus. The tank was used to test scale models of ship hulls, propellers and other technology – as it still does today.

Townsend’s job was to configure the instruments that measured variables such as thrust, resistance and wake, then drive the carriage that towed model vessels down the basin. Mounted on rails that run along each side of the basin, the carriage in those days held speed controls as well as monitoring equipment that helped the driver keep tabs on the vessel being tested. 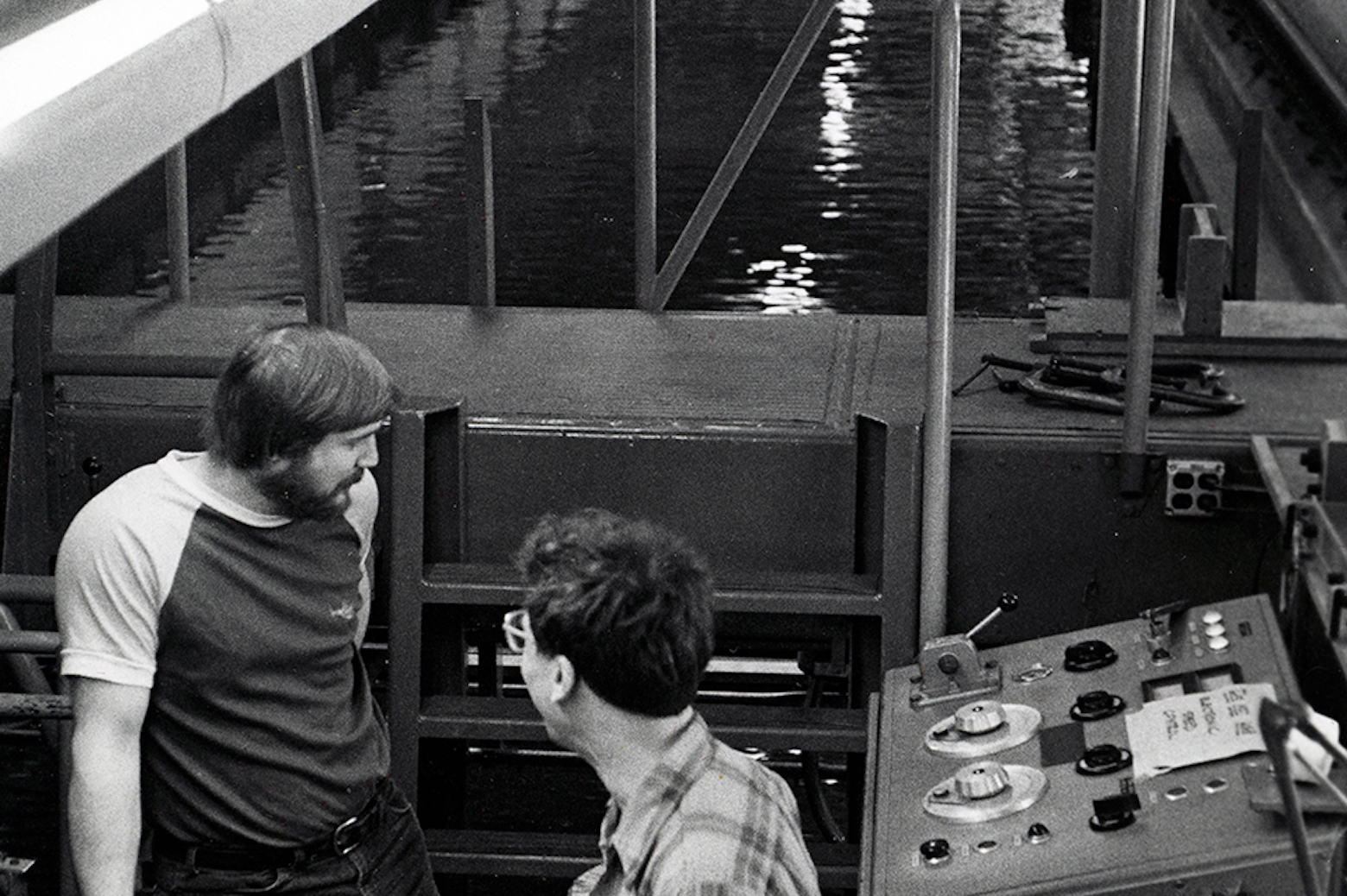 Driving the carriage in the 1950s and 1960s was very much a hands-on experience; Townsend had to carefully throttle it up to just the right speed and keep it moving smoothly as it towed its model through the water. And at the end of the basin, he had to smoothly slow and stop the carriage – which, in the early days of his tenure, he accomplished by pulling a leather belt against a flywheel.

Townsend soon found that in addition to saving him about $175 per semester on tuition, the job offered a front-row seat to the future of naval architecture.

“Most of the carriage drivers at that time were just people from Ann Arbor who happened to need a job – they’d have a book to read and they didn’t pay any attention to the tests,” he said. “But I watched every one, and after a while I started to notice things – how the wake from one hull design differed from another, things like that.”

Best Seat in the House

Driving the carriage was a hands-on experience; Townsend had to throttle it up and tow its model smoothly through the water.

Michigan model basin was the only university-affiliated facility of its kind in the United States when it was completed in 1904. And by 1959, it was used both as a teaching tool for students and as a test platform for new commercial vessel designs. Even in the 1960s, the basin was small com pared to many commercial tanks. But that made it an economical choice, giving ship builders a place to test unorthodox designs. And because it wasn’t connected with the military, companies could schedule experiments without the danger of getting bumped by a higher-priority government test. Those characteristics ensured a constant and varied mix of tests.

From his perch on top of the carriage, Townsend watched Naval Architecture and Marine Engineering Professor Takao Inui test U-M’s legendary Bulbous Bow technology. He saw the tests of countless commercial vessels, from oil tankers to an amphibious assault vehicle developed by the U.S. military. And he saw hundreds of students test new designs for the first time

“One week we’d have students testing propellers and the next week we’d have an oil company testing a new tanker hull design,” Townsend said. “Some of the commercial tests were very secret, all the shades would be drawn. But of course their competitor might come in the next day, and I’d see their whole test as well.”

Townsend ended up staying nine years, first working under venerable NAME chairman R.B. Couch, then eventually becoming director of the facility. He took classes part-time, scheduling them around his hours at the tank. 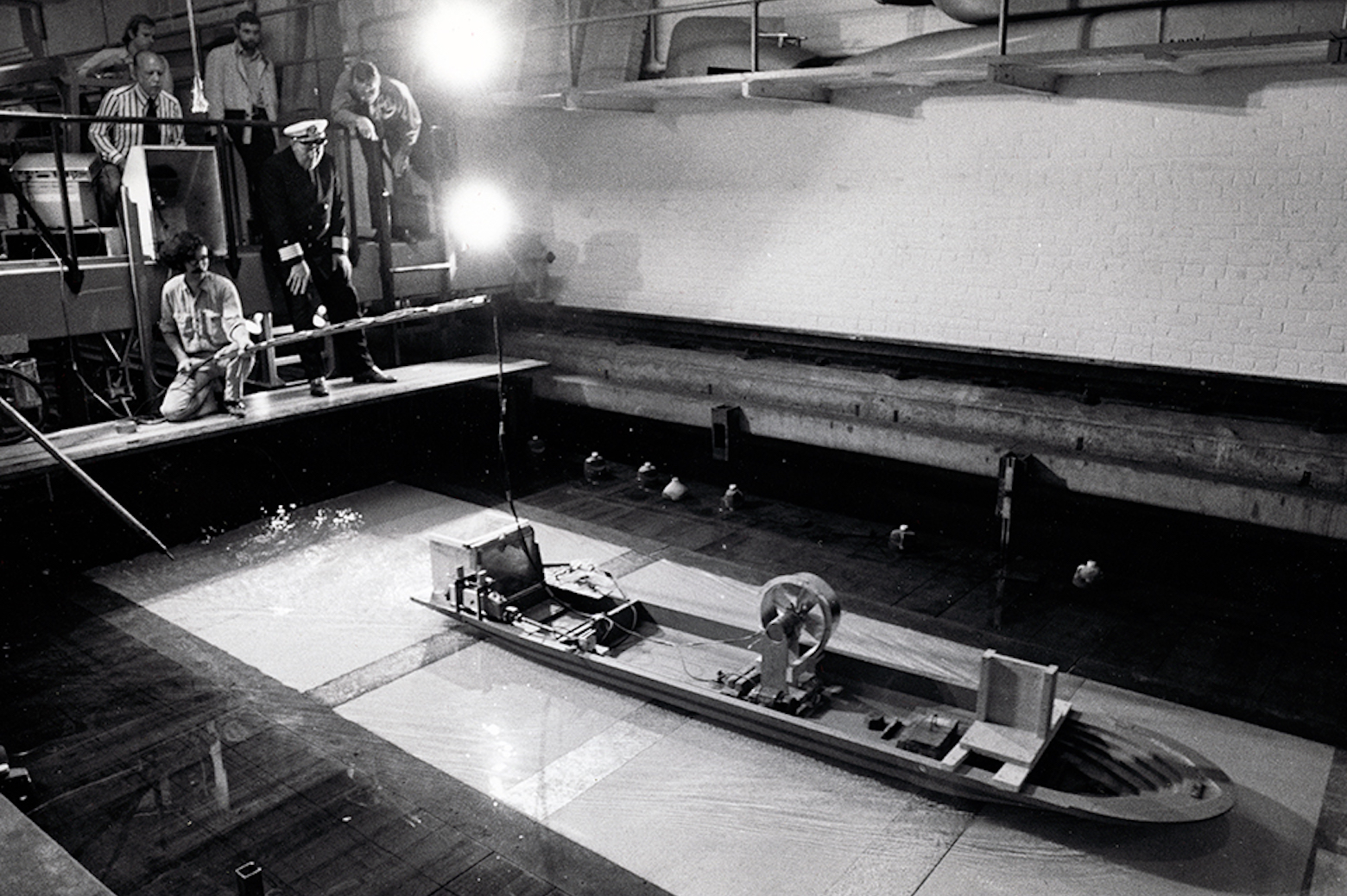 Seeing test after test, year after year gave Townsend an inside view of which ideas worked, which companies had the best designers, what succeeded and what failed. He also had the opportunity to work with a huge number of commercial ship designers – all of whom knew he had a unique perspective. But he quickly found that keeping all that information to himself was an important part of the job.

“You see what works and what doesn’t work, and you can’t really talk about it, but you have it in your head,” he said. “That’s what opened doors for me for the rest of my career.”

After graduating, Townsend went to work as guest scientific officer at the Netherlands Ship Model Basin (MARIN) for two years, then parlayed his experience into his own company, CT Marine. Based in Maine, CT Marine has designed every high-horsepower towboat built in the United States since 1988. Townsend headed the company until 2016, when he handed the reins to his son Christian.

The Michigan model basin was the only university-affiliated facility of its kind in the United States when it was completed in 1904.

Today the tow tank is part of the U-M Marine Hydrodynamics Laboratory (MHL), and has been extensively modernized. The jobs Townsend did by hand are computerized, and the carriage bristles with sophisticated optical tracking equipment, laser-guided stability testing systems, a wave generator and other advances. And more changes are in the works, thanks to a gift from Barbara Friedman-Kohler and family in honor of her father, the late Aaron Friedman. Friedman received a bachelor’s degree in naval architecture and marine engineering in 1943, served as a dry dock repair officer in the U.S Navy during World War II and, upon discharge, received a master’s degree in mechanical engineering in 1947. He held a lifelong love of boats and the University of Michigan, which motivated his family to make this gift in his memory.

The Friedman family’s generosity will help to modernize the offices and other facilities around the tow tank. It also will fund a new computer lab in the building that originally was called West Engineering. And the MHL will now forever be known as the Aaron Friedman Marine Hydrodynamics Lab.

But one thing that hasn’t changed over the years is the tank’s status as one of only two facilities of its size in the United States. That gives NAME students research opportunities that go far beyond what would be possible at a smaller tank.

“Hydrodynamics is a wonderful and complex phenomenon and nothing beats going to the laboratory and seeing liquid flowing,” said Steve Ceccio, the ABS Professor of Marine and Offshore Design Performance and current chair of the Department of Naval Architecture and Marine Engineering. “With a tank this size, students can actually go and see real tests of new equipment. That’s something that wouldn’t be possible at one of the smaller tanks.”

The tank doesn’t do as much commercial testing as it did during Townsend’s tenure, but commercial work still occupies about 25 percent of the tank’s workload. And even though computer modeling plays an increasing role in the testing of new naval technology, Ceccio is confident that decades from now, the tow tank will be as vital as it was when Townsend first climbed aboard the carriage in 1959.

“The tow tank sort of reinvents its utility for each new generation – we’re using it for experiments today that the people who ran it 75 years ago would never have dreamed of,” Ceccio said. “The thing that stays constant is that engineers need to understand the marine environment. As long as we’re designing objects for that environment, we’ll need something like this.” 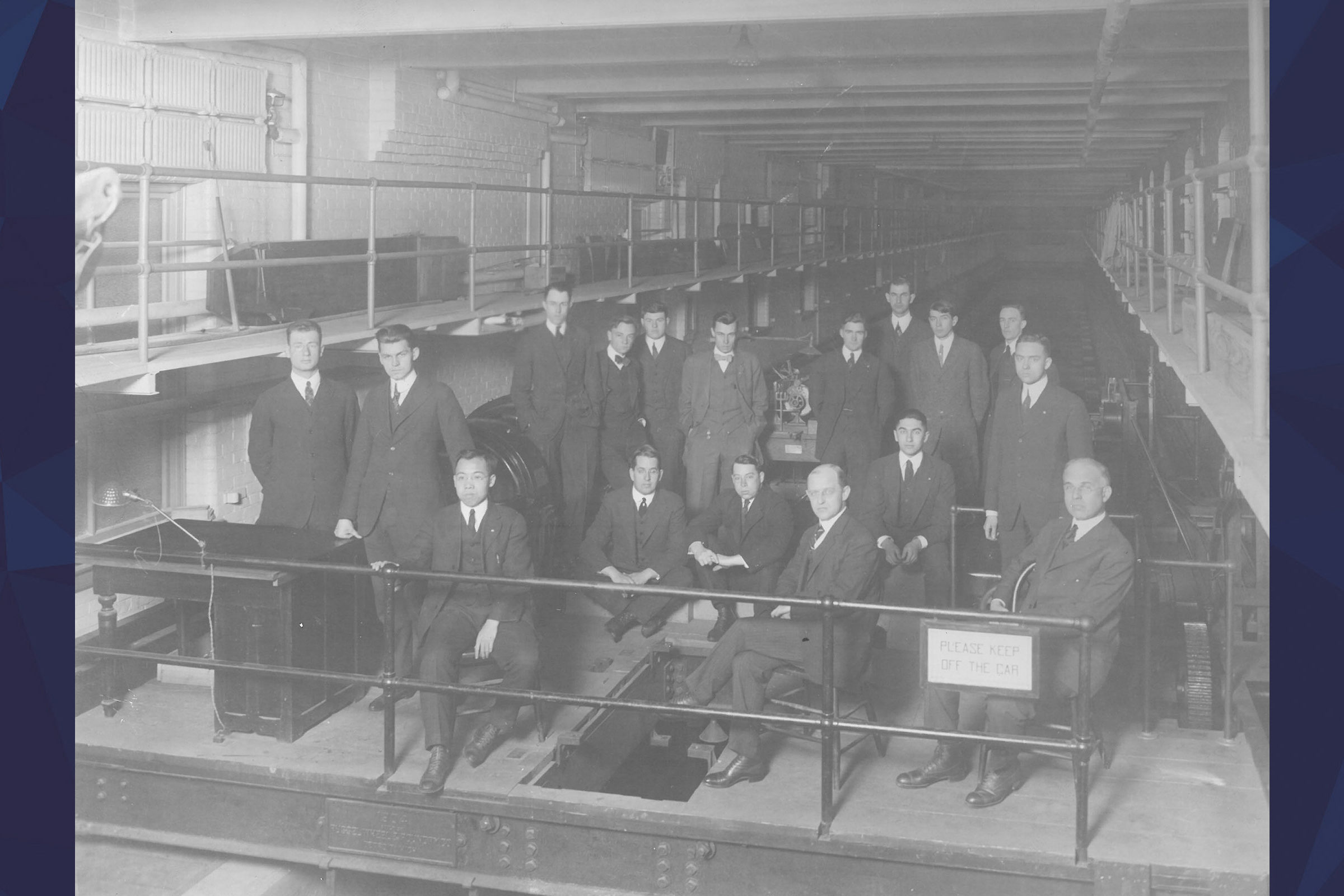 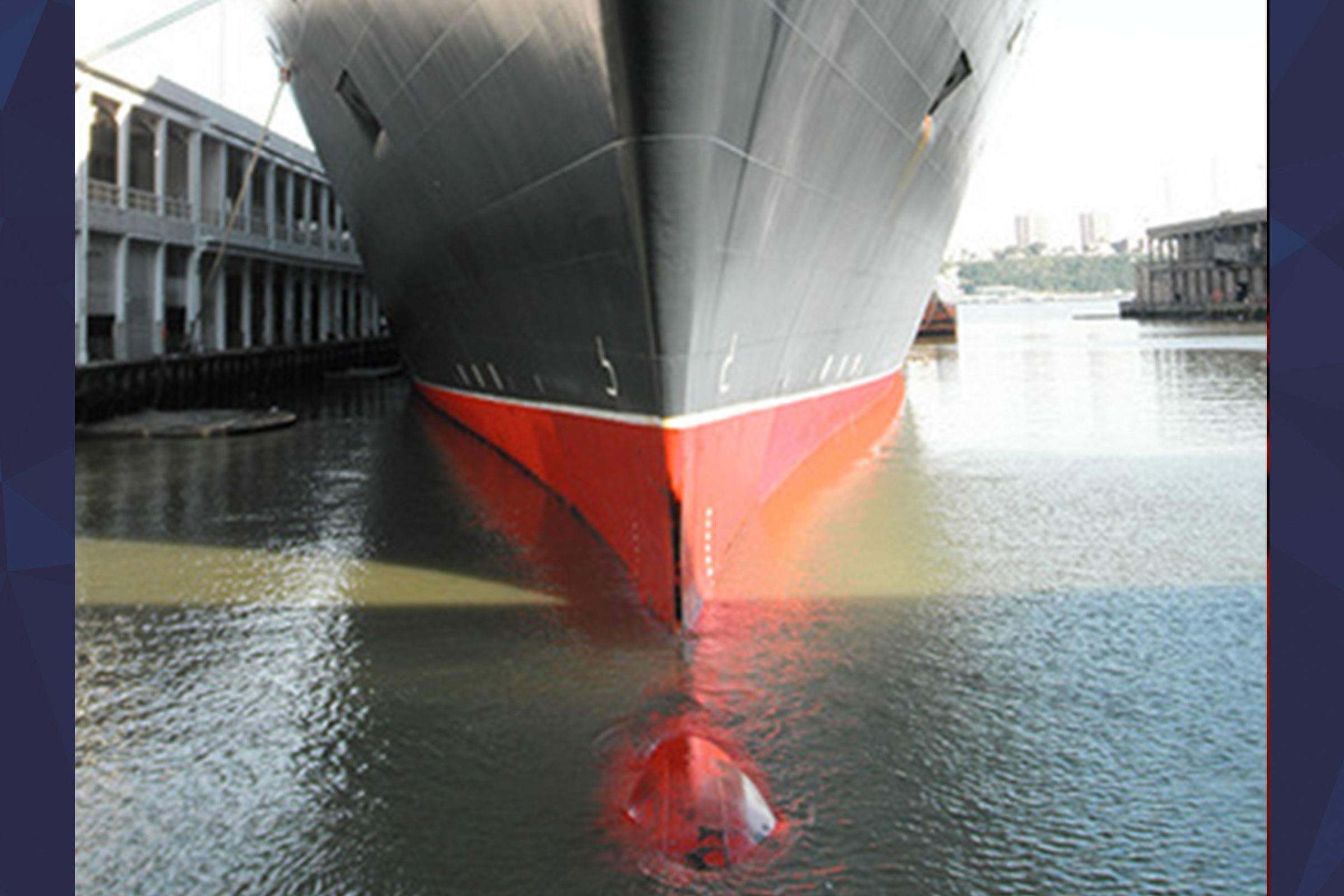