by Brad Whitehouse
Michigan Engineering
October 12, 2016
An “old rivalry” between engineers and lawyers broke out during a 1934 overnight ruckus in the Automotive Mechanics Laboratory.| Medium Read

The student-run Michigan Daily published its first report about it on January 12, 1934, and suggested that an “old rivalry between engineers and lawyers broke out again last night.”

But rather than some ancient feud renewed, it turned out to be a three-week engineering experiment that roused a group of law students to seek their own brand of justice.

The students were dressed “in pajamas and other rather inappropriate garb.”

The site of the ruckus was the Automotive Mechanics Laboratory, built off the back of the old Engineering Shops on Central Campus, just across South University Avenue and the Law School Quad. Inside the Auto Lab – a rather crudely constructed, wooden lean-to – engineering faculty and their students had been conducting their research since just after World War I.

The experiment that provoked the law students’ ire concerned the running of six 1934 Chevrolet motors, around the clock, at 2,500 RPM. For three consecutive weeks. 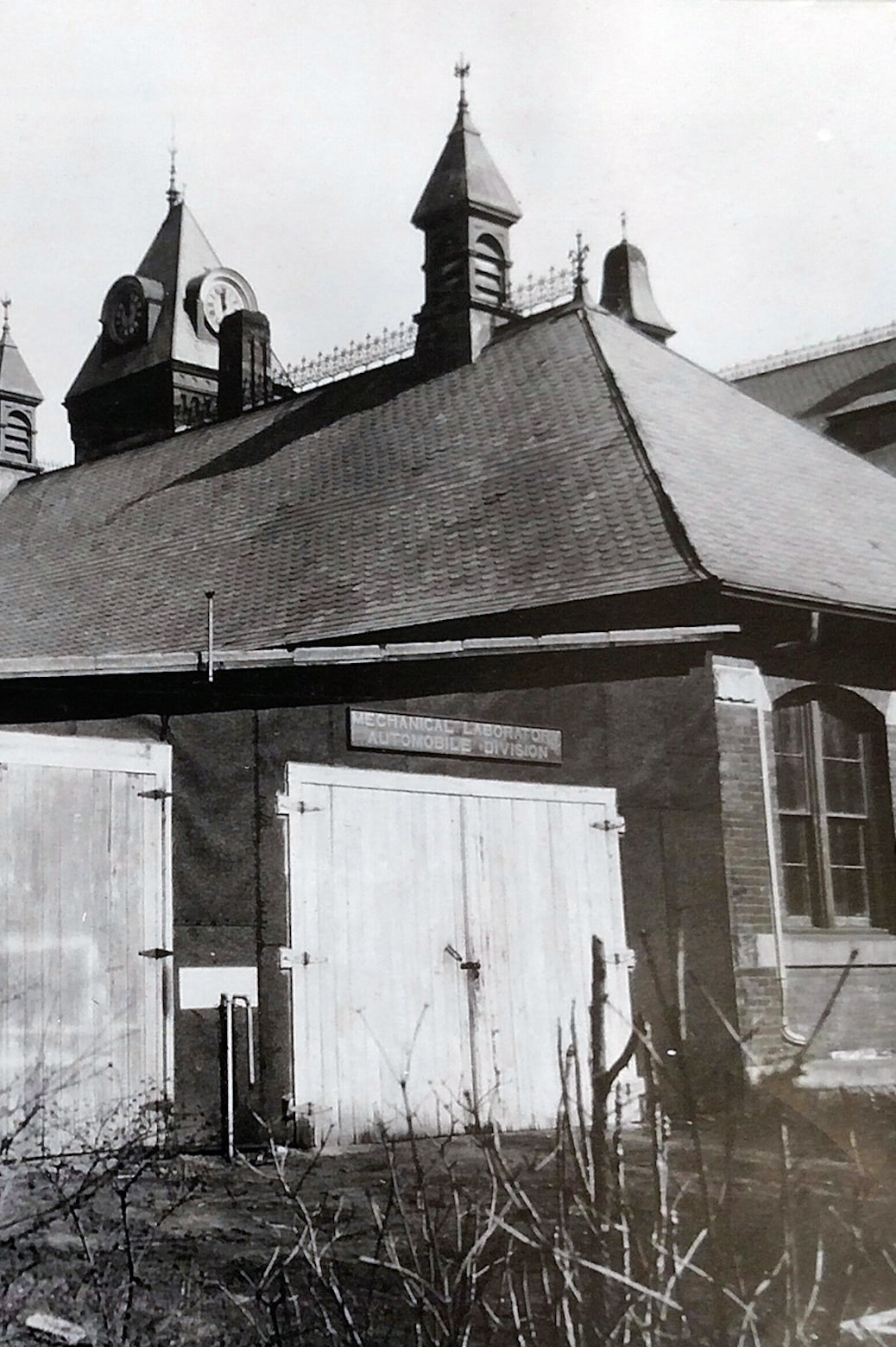 Not a Pajama Party

According to Michigan Daily reports, the persistent racket from that experiment is what caused approximately 50 law students to rush the lab late at night on Thursday, Jan. 11. The students, “some of them in pajamas and other rather inappropriate garb,” demanded that graduate student J.D. Dieteker shut down the test. When he refused for lack of authority, the students tried to get the Ann Arbor police to intervene. Finally, Dietiker reached Michigan Engineering Professor Walter E. Lay by phone, who told him to shut it down for the night.

But that was not the end of it. “Later,” according to Michigan Daily, “when the students were again in the beds or attacking the books from which they had risen in wrath, the motors began again, and this time the attackers were in earnest.”

The mob of law students, which had now apparently grown to 75, were initially locked out of the building by four watchmen, “but might triumphed and the door was torn from the hinges.”

“One of the guardians then drew a revolver, and conflicting stories of what followed were told yesterday,” the Daily reported. “One of the ‘pajama raiders’ said that a student thrust the blunt end of a wrench into the back of the guard, the revolver (which turned out to be empty) clattered to the floor, and the guard’s hands went high. Others said that he merely surrendered the weapon, but this was denied by many as it failed to make as good a story.”

“‘False arrest!,’ ‘You have no jurisdiction!’ and ‘Where are your warrants?’ bellowed forth in true courtroom style.”

The police showed up and threatened to arrest the students, but as the Daily recounts, “the vocation of the students began to assert itself in truth … and 75 voices raised more noise than the offending motors as ‘False arrest!,’ ‘You have no jurisdiction!’ and ‘Where are your warrants?’ bellowed forth in true courtroom style.”

The motors were finally silenced for the night – and the police, according to the Daily, “left for more pleasant pursuits – [such] as capturing murderers.” The law students continued their campaign the following day through legal channels, contacting officials from the university all the way up to the Secretary of State. They decided to hire a “graduated” lawyer to represent them, but “[i]n this they were forestalled…for officials in charge had decided that all would be happier if the hours were changed to 6:30 a.m. to 6:30 p.m.”

Crisis averted, the Daily reporter took a moment to muse: “Some have called it strange that the girls in Martha Cook Building, which is closer to the scene of the noise, did not complain. What has come over our Lawyers?” 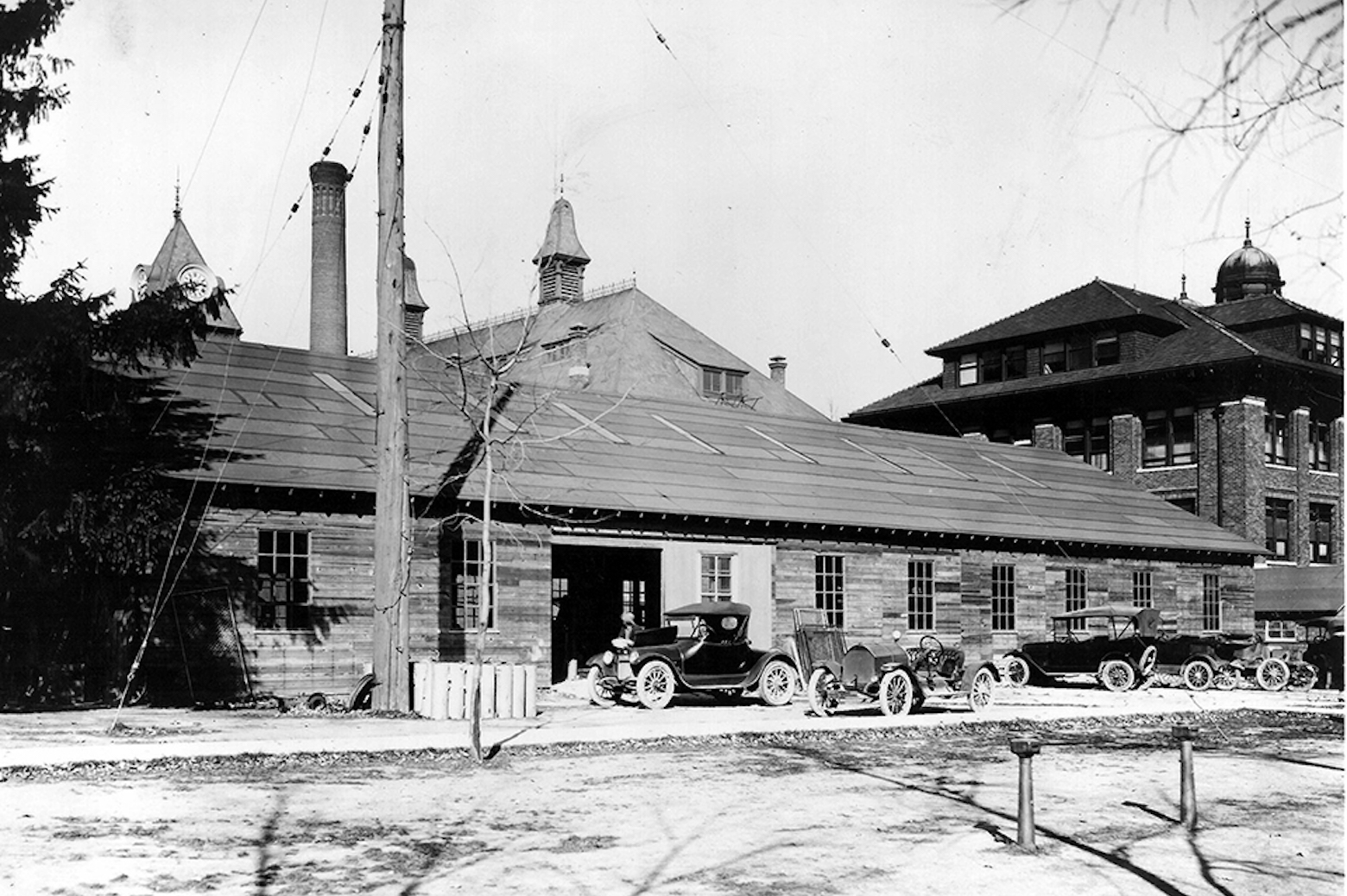 In an editorial the following day, the Daily added a postscript: “We do not doubt that research is necessary to engineering, but we are skeptical about its being so vital that it is necessary to create a public nuisance for three weeks in conducting it. We realize the necessity for equipment in the engineering college and hope that, when funds are available, the proper share of them will be used for this purpose.”

Which begs the question: What was such a ramshackle lab structure doing in the middle of the Diag in the first place?

Soon after the United States entered World War I, the University welcomed its first four detachments of enlisted men in April 1918 for an eight-week course in automotive engine repair – and nearly 2,000 more would be trained in the next six months. The University purchased and borrowed old vehicles and equipment, constructed some 6,000 square feet of floor space in temporary buildings, and recruited College faculty and instructors from trade schools, factories, and garages to teach the soldiers.

What was such a ramshackle lab structure doing in the middle of the Diag in the first place?

After the war ended, the lab moved into one of the temporary buildings. In 1922, when space was needed for the new Physics Building, the lab moved again into a hastily constructed lean-to shed. The 1934 raid might have demonstrated the obvious nuisance value of an automotive laboratory situated in a flimsy wooden building in the heart of campus. But when a fire destroyed the south half of the wooden lean-to shed in 1937, the shed was nonetheless quickly rebuilt.

During World War II, the lab would once again be deployed to advance those war efforts, and the engineering shops would finally be torn down in 1956, when the automotive lab on North Campus replaced them. In 1974, the new facility was renamed in honor of Walter E. Lay – that instructor who was telephoned in the middle of the night, and who soon became a Michigan Engineering icon.