Home of holography: from theory to reality

In 1952, twenty-five years old Emmett Leith was conducting highly classified research at the University of Michigan’s Willow Run Laboratories. This work – which utilized a novel process that mixed and recorded radar waves onto photographic film – was responsible for making a breakthrough in Cold War radar technology.

Little did Leith know that this early work would also establish the foundation for an innovation that would later inspire a global scientific movement – and make Leith well-known as the man who transformed the fledgling field of holography into a technology that has become integral to modern innovations in medical imaging, data storage, entertainment and other disciplines.

What is a Hologram?

At its most basic level, a hologram is an image that contains three-dimensional information that is “indistinguishable from the original object itself,” as Leith once said. Achieving this effect required the sculptural casting of a light wave, which would also take creativity, intuition, experimentation – and a bit of luck.

As with many breakthroughs, Leith’s work built upon the ideas of others.

And as with many breakthroughs, Leith’s work built upon the ideas of others.

Dennis Gabor of the Imperial College London had first introduced the concept of holography in 1947. Dr. Gabor was exploring ways to improve images from electron microscopes. But technological limitations would temporarily thwart his efforts. Making holograms required a coherent light source – a beam of photons that maintain a fixed and predictable phase relationship with each other over a period of time – and the best available source of coherent light at that time was high-pressure mercury lamps. Unfortunately, their output prohibitively constrained the quality, type and size of early holograms – and all work related to holography went dormant.

Leith had been intrigued by the challenge and novelty of holography, but his other work kept him too busy to experiment with it until 1960, when Willow Run hired Juris Upatnieks as a new research assistant. The pair began working on holography utilizing Leith’s signal modulation theory from his earlier radar days. They were trying to solve the fuzzy resolution and “twin image” problems inherent in Gabor’s holograms – and both solutions came in the form of technological as well as creative inspiration. 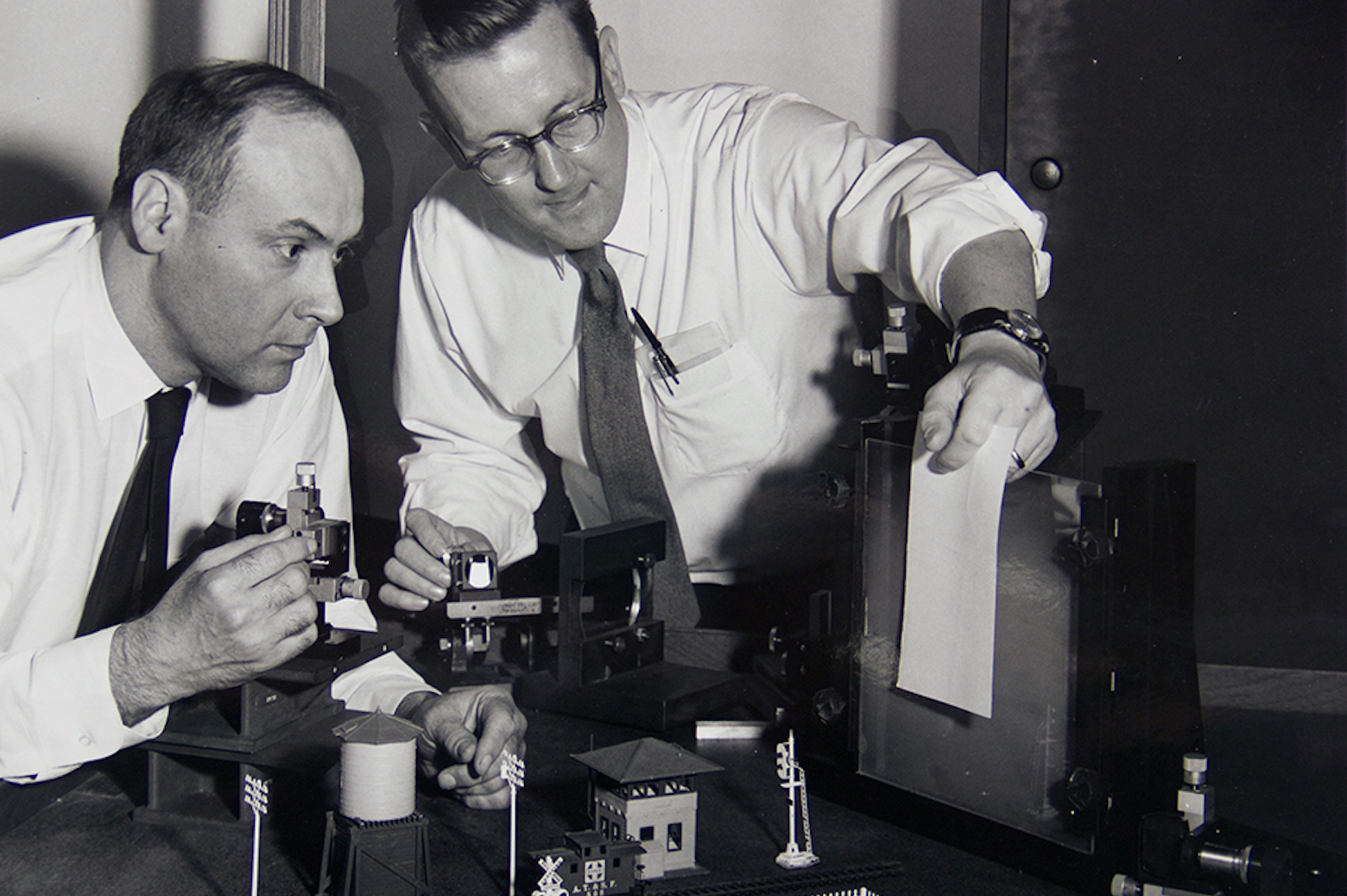 The twin image solution came following the brilliant idea to add a second beam to the recording process. One became the reference beam, aimed directly at the plate recording the hologram. The other became the object beam, aimed at the object so that it would scatter light toward the plate. After much trial and error, these two light signals were successfully combined and modulated into one holographic image, and the second confounding and unwanted image was eliminated. This technique became famously known as “off-axis” holography.

The solution to sharpening the holograms’ resolution presented itself when a new toy entered the lab.  Willow Run had acquired its first laser, and one of their associates was working non-stop with the wonderful new apparatus. Inevitably, Upatnieks says, “We kind of talked him into letting us borrow his beam.”

“We kind of talked him into letting us borrow his beam.”

This new, more precise light source was a dramatic improvement over the mercury lamps that had been used for earlier holograms. The team began to systematically test variables and improve their technique. They were building their experimental apparatus from the ground up. This included everything from the photographic film they used to the four by five foot vibration-proof granite slab they installed as the foundation of their set-up. Understanding the optimal angles, refractions and reconstructions of the laser beam itself was again the product of exhausting trial and error. 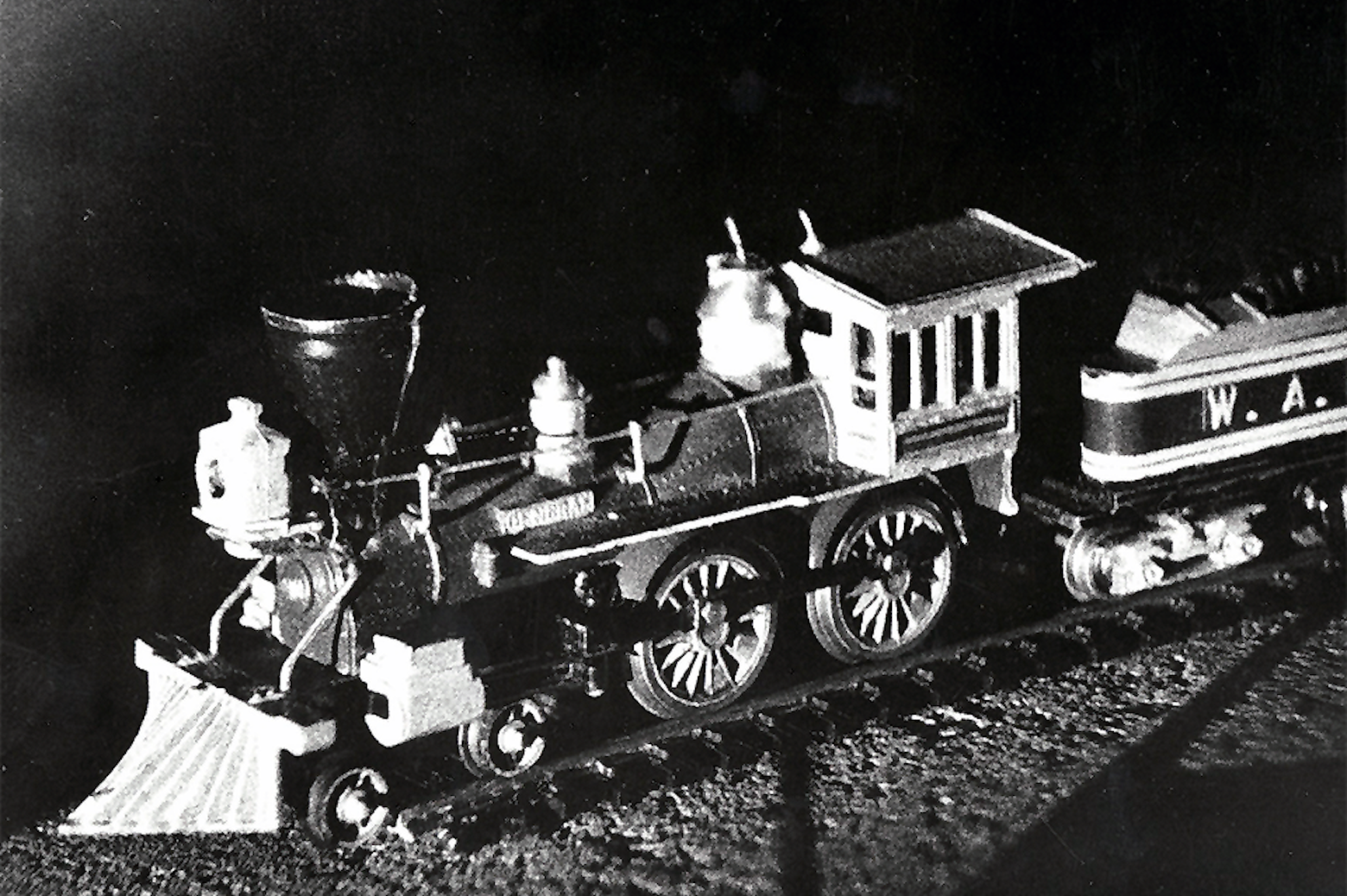 Gradually, Leith and Upatnieks optimized their system, enabling the team to produce holograms that were crisp three-dimensional reconstructions of the original objects.

The team gave a talk at the Optical Society’s 1964 Spring Conference. Afterward, attendees from across the optics world lined up to see demonstrations of their almost magical 3-D reconstructions.

“I think that was the high point in the dissemination of holography,” Leith said.

But enthusiasm spread fast. And a boom in holographic research and development promptly followed.

When Leith and Upatnieks displayed the hologram of the train at a conference in April 1964, other scientists lined up to see it. “Toy Train” was not the first hologram ever made, but the quality of the image stunned everyone. So it became the first hologram most people heard about.

The holographic glass plate and actual toy train are preserved at the Smithsonian National Museum of American History in Washington, D.C.

Leith and Upatnieks would win many prestigious awards for their accomplishments. Their work was praised by Gabor himself, who won a Nobel Prize in 1971. Gabor credited the success of Leith and Upatnieks “not only to the laser, but to the long theoretical preparation of Emmett Leith, which started in 1955.”

Though this early work in holography would become crucial to the modern development in many diverse fields, Leith also had a direct influence on countless Michigan Engineering students throughout his 40 year career as a professor in Electrical Engineering and Computer Science.

For a glimpse into how Leith’s work has helped to make Michigan Engineering an innovative leader in optics – and in the exploration of new frontiers in speed-of-light sciences and high-powered lasers – see Optics and Photonics.

Sources for this story include Absorbing New Subjects: Holography as an Analog of Photography, Sean F. Johnston (2006); Holography and the Laser, Jeff Hecht (2010); EECS News, University of Michigan College of Engineering (2006);  and the website of the National Museum of American History.