by Kim Roth
Michigan Engineering
October 12, 2016
Following a half-century of service, Knoll is remembered by the many whose lives he changed| Medium Read

On the day of his death, April 20, 2014, Glenn Knoll – University of Michigan Nuclear Engineering Emeritus faculty and award-winning teacher, engineer and researcher – was still as active as ever. He was reviewing proposals and writing white papers to meet imminent deadlines. He even sent final ideas for the upcoming Symposium on Radiation Measurements and Applications (SORMA), the international conference he founded nearly 50 years ago, and that continues to gather in Ann Arbor to this day.

So it was only appropriate that many who were attending that SORMA event at the Michigan League, where Knoll was being remembered at a memorial program on June 9, 2014, also filtered into the memorial to learn about the man who had founded the event. Most had never met him but all knew who he was, as did everyone in the fields of nuclear measurements and detection fields, whether in academia, government, research labs or private industry.

On the day of his death, Glenn Knoll was as active as ever, reviewing proposals and writing white papers to meet imminent deadlines.

Hundreds of colleagues, former students, friends, and family honored Knoll’s contribution to the world of science, as well as a legacy that will continue to impact the study of radiation measurement – Knoll’s passion – for generations to come.

A storied career
Knoll received his PhD at the University of Michigan in 1963 and immediately became a member of the faculty. From 1979 to 1990, Knoll served as Chairman of the Department of Nuclear Engineering, where, under his leadership, the size and prestige of the department matured to its current level. After returning to the faculty ranks, Knoll initiated a new research field of room-temperature semiconductor radiation detectors and led this effort until tapped to serve as interim dean of Michigan Engineering from 1995 to 1996. Knoll then returned to his true calling – teaching and research – until his retirement in 2001.

Knoll’s contributions have been recognized widely. He was inducted as a fellow of the Institute of Electrical and Electronics Engineers (IEEE), the Institute of Medical and Biological Engineering and the American Nuclear Society (ANS). Knoll also was honored with the ANS Glenn Murphy Award for Education, the ANS Arthur Holly Compton Award, the IEEE Career Outstanding Achievement Award and the IEEE Third Millennium Medal.

Knoll was a member of the National Academy of Engineering (NAE), and participated in the formulation of post-9/11 planning through ideas published in the NAE book, Making the Nation Safer.

Knoll enjoyed the technical fraternity of colleagues and travelled internationally to participate in their lives. He served as an International Atomic Energy Agency reviewer of international programs and taught his radiation detection course on every continent but one. As an editor of journals in his field, Knoll was universally known and respected.

Changing lives
“Glenn Knoll changed my life and my family’s lives forever,” remembers Valentin Jordanov, a native of Bulgaria and former Knoll student. “He pulled me from behind the Iron Curtain. He believed in me even though at the time my English wasn’t very good. He was an example of integrity and a teacher of life.” Jordanov now owns his own radiation detection company and consults. Recently he opened an art gallery in Santa Fe, New Mexico, and his regret is that his mentor was never able to visit it. 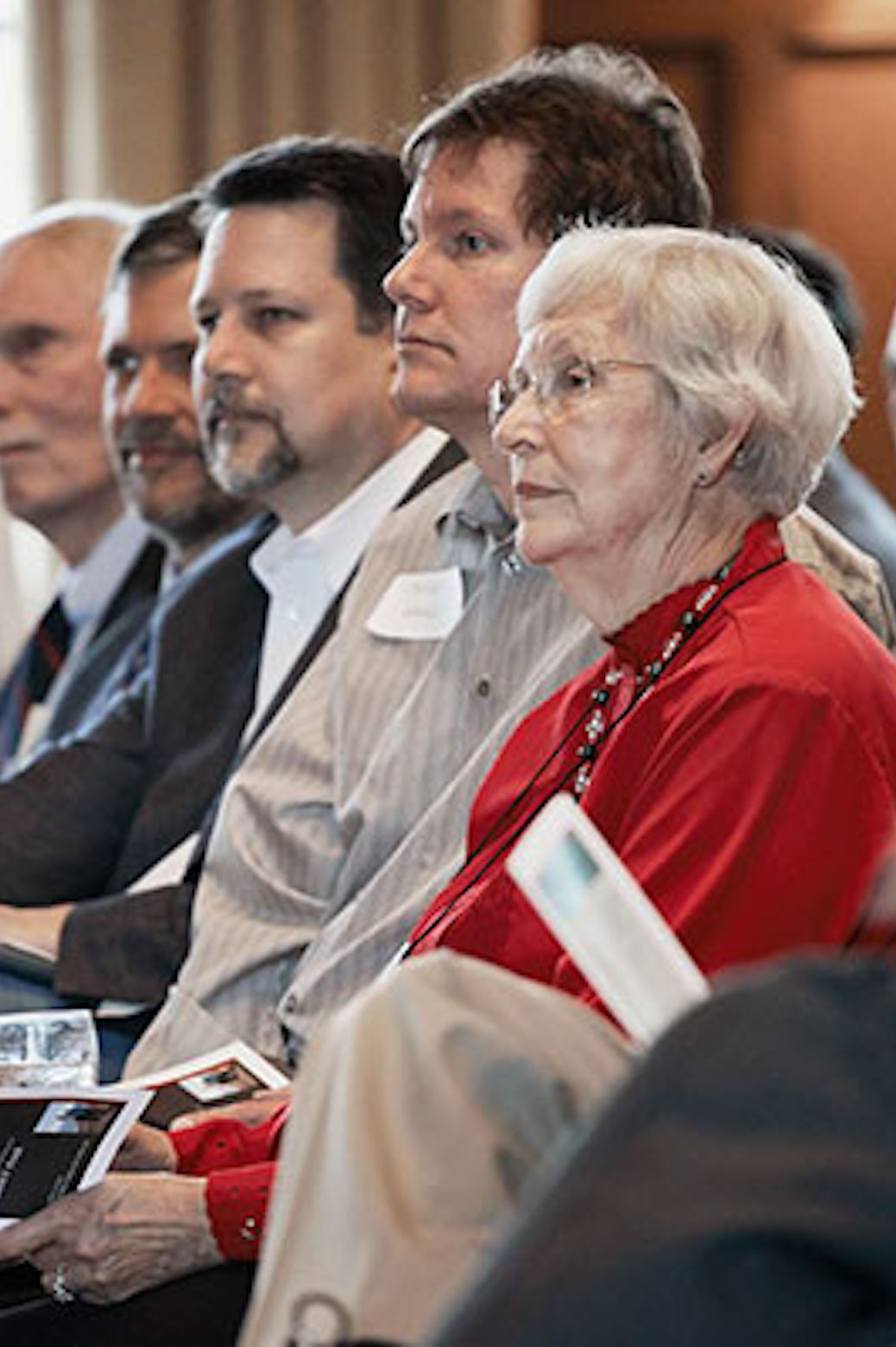 James Baciak, now chair of the Nuclear Engineering program at the University of Florida, was a student of Knoll’s in the 1990s.

“Dr. Knoll was one of two people who were influential to me as a young undergraduate. I sat down with him when he was department chair and told him I wanted to study plasma space propulsion. He told me I was wrong, that what I wanted to study was nuclear measurement because of all the fields I would study in that program. He said I would become the perfect engineer. And he was right. His advice also led me to meet my wife. So, you could say my career and happiness are due to Dr. Knoll.”

In 1979 Knoll published his enduring textbook, Radiation Detection and Measurement, which Amazon describes as “the resource that engineers turn to in the study of radiation detection.” Its fourth edition is still the standard used in nuclear engineering programs. It was that book, in fact, that Ronald Gilgenbach, current chair of the Nuclear Engineering and Radiological Sciences department and the Chihiro Kikuchi Collegiate Professor of Nuclear Engineering and Radiological sciences, saw in the MIT bookstore. It changed the course of his career.

“I was considering applying to the University of Michigan for a faculty position. I admit that I didn’t know a lot about U-M or the Nuclear Engineering department, but when I saw a shelf-full of Glenn Knoll’s new book, that made a big impact on me. I applied for the position and got to interview with Dr. Knoll himself… . Glenn was one of the pillars in the foundation of the Nuclear Engineering department. When the department was founded, there was no well-defined field of nuclear measurements. Glenn invented the field with his own pioneering research, culminating in the publication of his classic book.”

A playful man of innumerable talents
Rarely does a man come along who is a brilliant as Knoll and yet has a great capacity to have fun. During the memorial program the attendees learned about his talent for fencing, his enjoyment of exotic travel all over the world, his love of music and singing in a glee club and his sense of adventure with his cars and motorcycles.

“One day Gladys (Knoll’s wife) called me and offered me her place with Glenn at the U-M football game because she couldn’t make it. The only stipulation was that I had to ride to the stadium on the back of his Harley Davidson motorcycle. I opted to stay home that day,” laughs Sister Judith Vanderveen, a Sister of Mercy nun and friend of the Knoll family.

He pulled me from behind the Iron Curtain. He believed in me even though at the time my English wasn’t very good. He was an example of integrity and a teacher of life.”
Valentin Jordanov, former student

Former colleagues and students made it clear that Knoll had a playful, competitive spirit. He played softball on the Nuclear Nine (was a solid third baseman), and had a passion for paddleball and racquetball. He also enjoyed a monthly game of poker.

Clair Sullivan, a former PhD student of Knoll’s, now an assistant professor at the University of Illinois-Champaign, remembers attending an Institute of Electrical and Electronics Engineers (IEEE) conference with him in Portland, Oregon. “After an exhausting day at the conference Dr. Knoll wanted to play poker. So we used toothpicks for chips and even though he might like to say he won, I remember one of his students winning. But on the golf course, he always won.”

A Renaissance man who left a great legacy
Knoll was a world leader in nuclear measurement and detection. His research elevated the field to a level of new understanding and he mentored 26 PhD students who also have added significantly to new discoveries, and to education. His longtime friend and college roommate, Paul Plummer, says that at an early age it was evident that Knoll was “capable of understanding everything.”

“My father encouraged curiosity and creative expression,” said Tom. “There were several hobbies that he and I did together: model-making, still photography, making furniture, electronics and computer programming. Most of those hobbies had an impact on my future.”

Tom Knoll is one of the developers of the popular software, Photoshop. “I am immensely proud of his contribution to science and his commitment to the University of Michigan. He loved this place!”

Knoll’s youngest son Peter said his father’s legacy would be his absolute devotion to improving society.

According to James Duderstadt, U-M President Emeritus, University Professor of Science and Engineering and Knoll’s colleague, “Glenn Knoll left his legacy for science with a half century of world leadership in nuclear measurement. But he was also fun-loving and kind, he took young faculty and graduate students under his wing.”

It’s often been said that many people have built entire careers out of Knoll’s ideas in fields such as nuclear medicine, oil exploration, radiography, nuclear physics, homeland security, and environmental stewardship.

“Glenn’s absolute integrity and uncompromising standards of excellence have deeply impacted all of us,” said Gilgenbach. And by all of us, Gilgenbach means the world.

A new nuclear engineering laboratory
And the Knoll legacy will continue with construction of a new Nuclear Engineering Laboratory at the site of the former Ford Nuclear Reactor, part of the Phoenix Memorial Project until it was decommissioned in 2003 and subsequently dismantled.

The completely renovated, four-story, 13,000-net-square foot space will continue the research legacy of the former reactor, and provides a fitting new home for several NERS faculty – professors Zhong He, David Wehe, Annalisa Manera, Sara Pozzi, Igor Jovanic and Michael Atzmon – to advance their work on nuclear measurements, thermal-hydraulics, detection and nonproliferation. Completion of the $12.4 million renovation is slated for spring 2017. Generous funding for this laboratory was provided by Bob and Betty Beyster, Gladys Hetzner Knoll (Glenn’s widow), the estate of Harold N. Cohn and friends and family of Professor John. S. King.

“We are deeply appreciative of the generous donations from scientific giants whose contributions we have admired for decades,” says Wehe. “The Knoll laboratory will enable us to continue Professor Knoll’s legacy of breakthrough research on new radiation imaging modalities that will remain vital for global security, medicine and nuclear safety for generations.”